Share
Share
I've been following a story over the past few days that's hit close to my heart. A week back someone sent me a link to a petition asking Facebook to take down pages that celebrate rape/gender-based hate speech through suggestive posts and photos. I didn't see what the big deal was at that time because I thought, "Why wouldn't Facebook automatically block or delete those pages?" It turns out, at the time, Facebook believed these pages and photos weren't in violation of their code of ethics and posting guidelines. I was shocked. Yes, Facebook is a free social media platform, but surely they must have a sense of morality, right? [caption id="attachment_15761" align="aligncenter" width="453"] 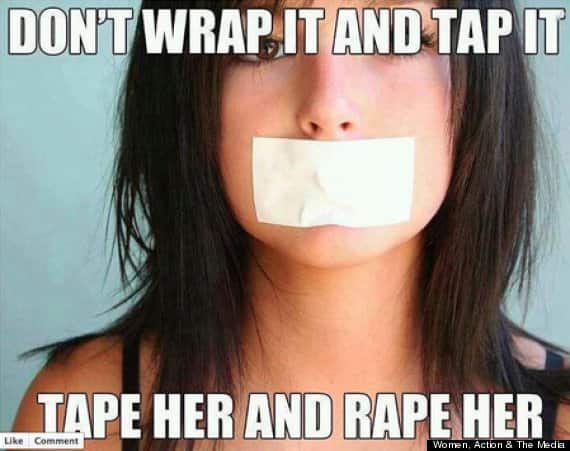 One of the many photos circulating around Facebook that celebrates rape culture. (Image courtesy of Women, Action and the Media)[/caption]   I thought back to the story of Rehtaeh Parsons, who killed herself earlier this year because of suggestive photos that were circulated around the web (and in particular, on Facebook), after she was allegedly gang raped by four boys. Could her death have been prevented had Facebook been more strict about their rules on posting photos? Sadly, we will never know. So imagine how happy I was to wake up this morning and find out that three women who began a campaign to make Facebook take action against these posters/pages actually won! And it only took them seven days to get the giant social media site to cave under the pressure brought on by people standing firm in their unified belief: It is not okay to celebrate rape and violent culture. And it is not okay to promote it -- as a joke or as anything else. Women, Action and the Media launched this campaign last week to get Facebook to put an end to gender-based hate speech/images on their website. As part of the campaign, they reached out to advertisers and asked them to pull their ads from the site -- and over 15 big-name companies agreed to do just that. In addition, there were over 60,000 posts on Twitter showing support for the campaign. [caption id="attachment_15767" align="aligncenter" width="453"] 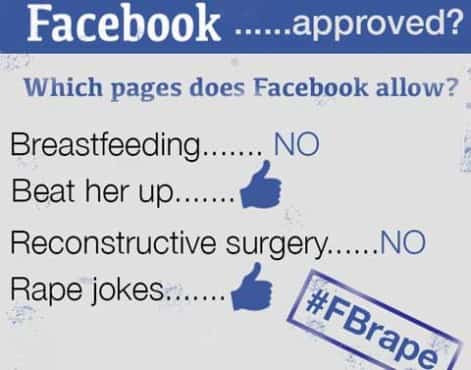 Part of the campaign against Facebook. (Image courtesy of Women, Action and the Media)[/caption]   Facebook, notorious for not having a direct point of contact where one can address these concerns, issued a statement today saying they will review their guidelines and update training for employees. They also said they will increase accountability for those who post such offensive matter. The company said they plan to work more closely with women's groups as well. So cheers to Laura Bates,  founder of the Everyday Sexism Project; writer Soraya Chemaly and Jaclyn Friedman, creator of Women, Action & the Media, for making Facebook see right from wrong -- in one week. Way to go! This is proof that social media can be easily used to do good. So do good!

“Social media spark a revelation that we, the people, have a voice, and through the democratization of content and ideas we can once again unite around common passions, inspire movements, and ignite change.” ― Brian Solis, author

Do you think this is a step in the right direction for Facebook and other social media platforms? Please share your comments and thoughts on this topic in our comments section, below.

Cheers to three women who took on Facebook -- and won!