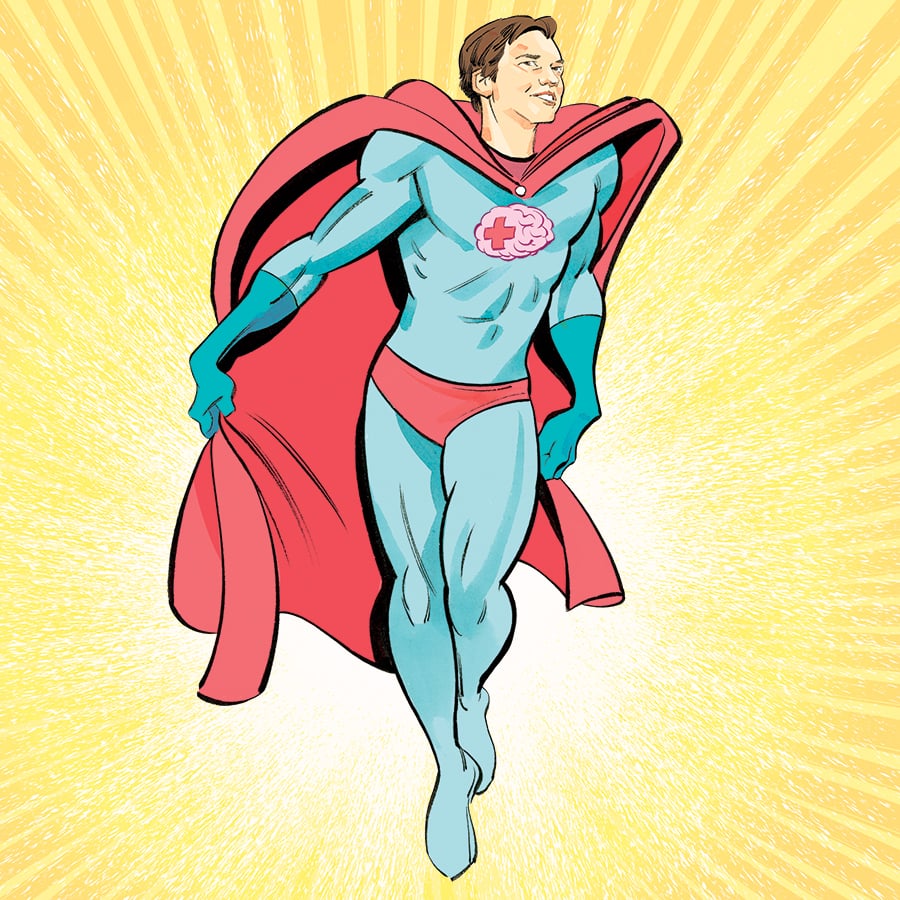 A couple of years ago, 16-year-old Patrick Hickey had what he calls an "epiphany." He decided he needed to do something to help the people he loved and valued in his life who were quietly struggling with mental health issues. "There was no watershed moment," says Patrick, "just a realization that, although I hadn't talked down to these people or made their condition any worse, I'd never done anything to make it any better or easier." So, in November 2014, after a few months of planning, the teen organized a Mental Wellness Day for 600 students at Holy Heart High School in St. John's, N.L. The event, which included two dozen workshops, guest speakers and information booths, prompted an outpouring of appreciation. "One student who had been suffering from depression and had just listened to a guest speaker talk about it hugged me," says Patrick. "I remember him saying, ‘This is happening—it's really happening.' It was such an emotional day."

In April 2015, Patrick went further, cochairing Mental Health Matters: A Whisper to a Scream, a two-day provincial mental-wellness conference involving more than 30 high schools from Newfoundland and Labrador. "Over a weekend, willing and eager youth became accepting, supportive networks for each other," says Patrick. "It was overwhelming."

Now a student at Western University in London, Ont., Patrick is working on creating similar mental health initiatives, including a mental health conference in Kangiqsujuaq, Nunavik, planned for 2016. "We need to keep the conversation going," he says. "Although a lot has been achieved, there's still so much to do for mental health—in my city, in my province and in the country." 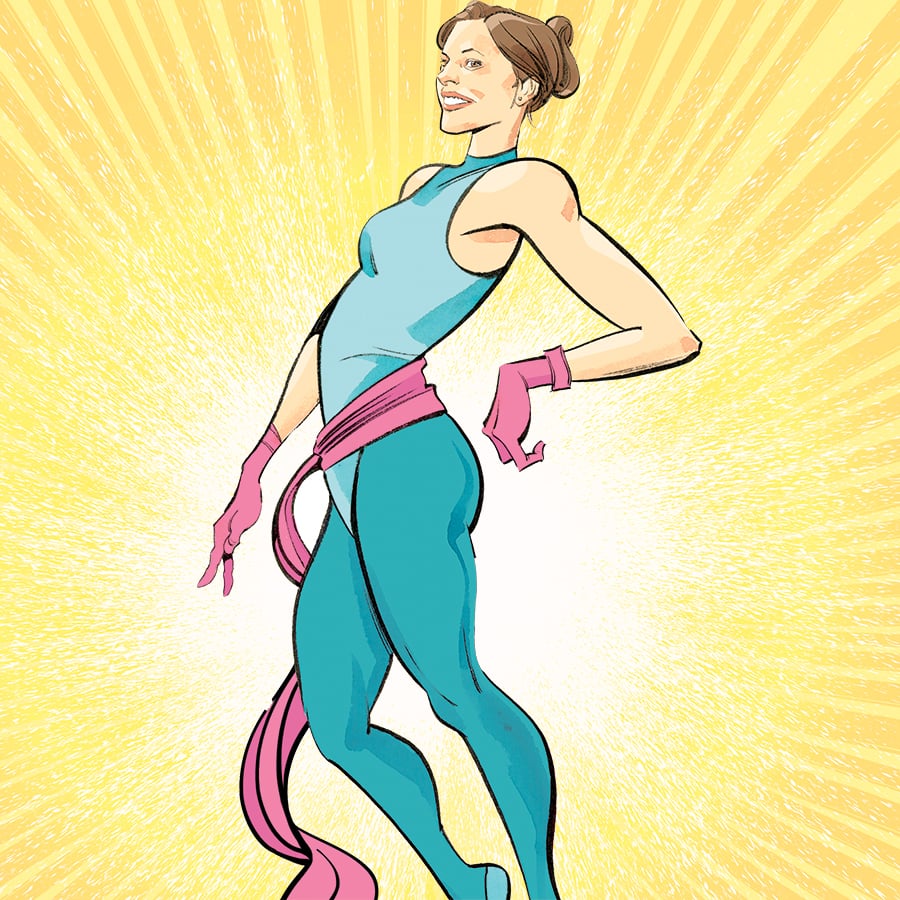 Sarah Robichaud has always understood the joy of movement; it's been part of her life for 25 years as a dancer and 14 years as a personal trainer. But it wasn't until 2007 that she discovered dance can also be transformative. At that time, Sarah had begun working with a new client who had Parkinson's disease, a progressive nervous-system disorder that may include symptoms such as tremors, stiffness, slowness of movement and difficulty maintaining good posture. While researching ways to ease her client's symptoms, Sarah learned about Dance for PD, the internationally acclaimed dance classes in New York City for people with Parkinson's disease. Soon, she added dance to her client's more functional resistance training and stretching sessions. "He enjoyed the workouts more when he was dancing," she recalls. "His balance was better and his gait was better."

In 2008, Sarah started the charity Dancing With Parkinson's, which offers dance classes to help people with the disease develop core strength and balance, and increase their range of motion, all through simple movements and improvisation. "With Parkinson's, people lose their ability to initiate movements needed for basic daily tasks," says Sarah. "In class, it's about finding ways to activate those neural pathways with live music, imagery, choreography, camaraderie and motivation. All of these things, intertwined, help people move."

Dancing With Parkinson's classes are taught by Sarah and 12 teachers trained by her organization. Offered daily at seven Ontario locations, with five in Toronto and two in the Kitchener-Waterloo area, the classes have become so popular (additional classes were added due to long waiting lists) that, over the next five years, Sarah hopes to expand the program across Canada. "I never thought I would be so lucky to find such meaningful work," she says. "When someone tells you after a class, ‘I haven't seen my husband stand up and move for the past five years,' it's profound." 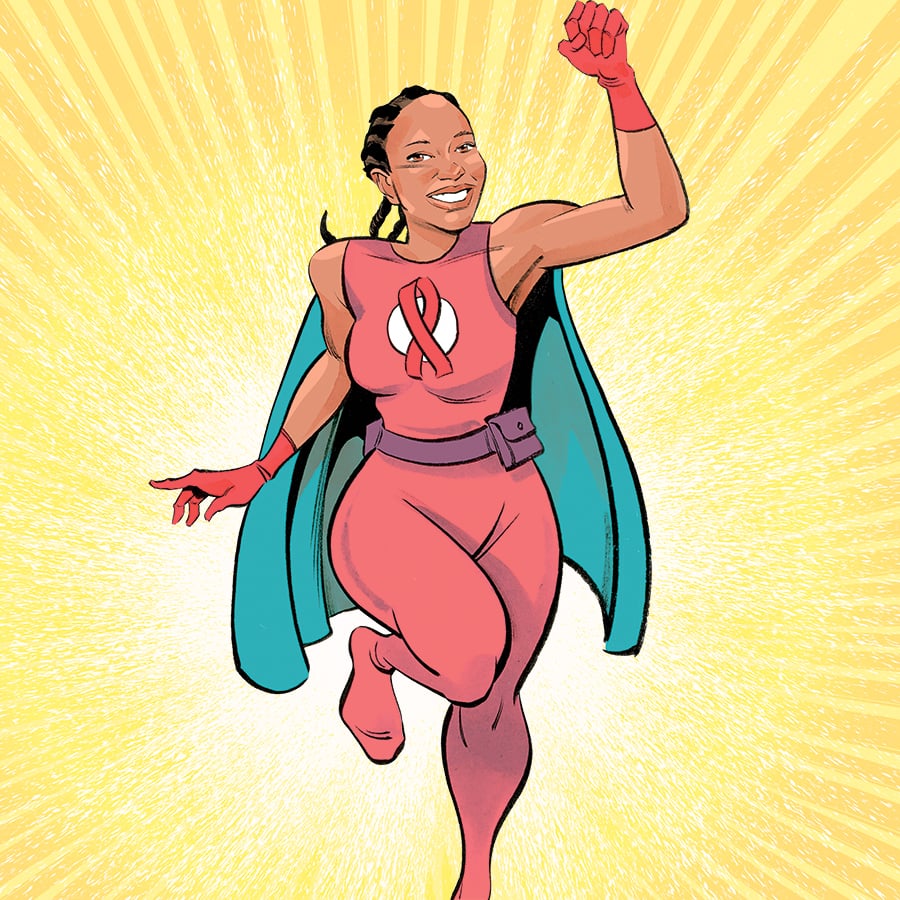 Even while managing her own health crisis, Moréniké Oláòsebìkan was thinking about others. More than a decade ago, while she was undergoing treatment for tuberculosis in her native Nigeria, Moréniké noticed how patients living with HIV were stigmatized. "I was moved by their challenges, so in 2003, when I arrived in Canada to study, I knew I wanted to do something to support that community," says Moréniké, who now has her own fashion label and is a pharmacist and associate owner of a Shoppers Drug Mart in Edmonton. What she didn't have in funds, she had in drive and talent. "I could paint, design clothing and sew, so I took an idea to the African-Caribbean society where I was studying at the University of Alberta," she says. "We would invite all of our friends and everyone on campus, charge a little money and organize a fashion, arts and music exhibition." The result was the Ribbon Rouge gala, a night of fashion, food, music, dancing and fine art, with proceeds going to support HIV relief.

Ten years later, the Ribbon Rouge gala has raised almost $46,000 for three organizations: HIV Edmonton, The Stephen Lewis Foundation and UNAIDS, the Joint United Nations Programme on HIV/AIDS. "The theme of the gala is conveyed through art, poetry, music and dance," says Moréniké, "and the speeches are directed toward social action and breaking down the barriers to care." She hopes to grow Ribbon Rouge into a charity that, through the arts, advocates and educates locally and globally to raise awareness and funds for a cure. The challenge, she explains, is that HIV is no longer a media headline, so many people don't think it's relevant anymore. Yet, according to Alberta Health's annual report, there were 255 newly diagnosed cases of HIV in that province in 2013—an increase for the third year running. "The ultimate goal is that we get to zero," says Moréniké. "It would be awesome to be able to say that there are no AIDS-related deaths in Edmonton anymore." 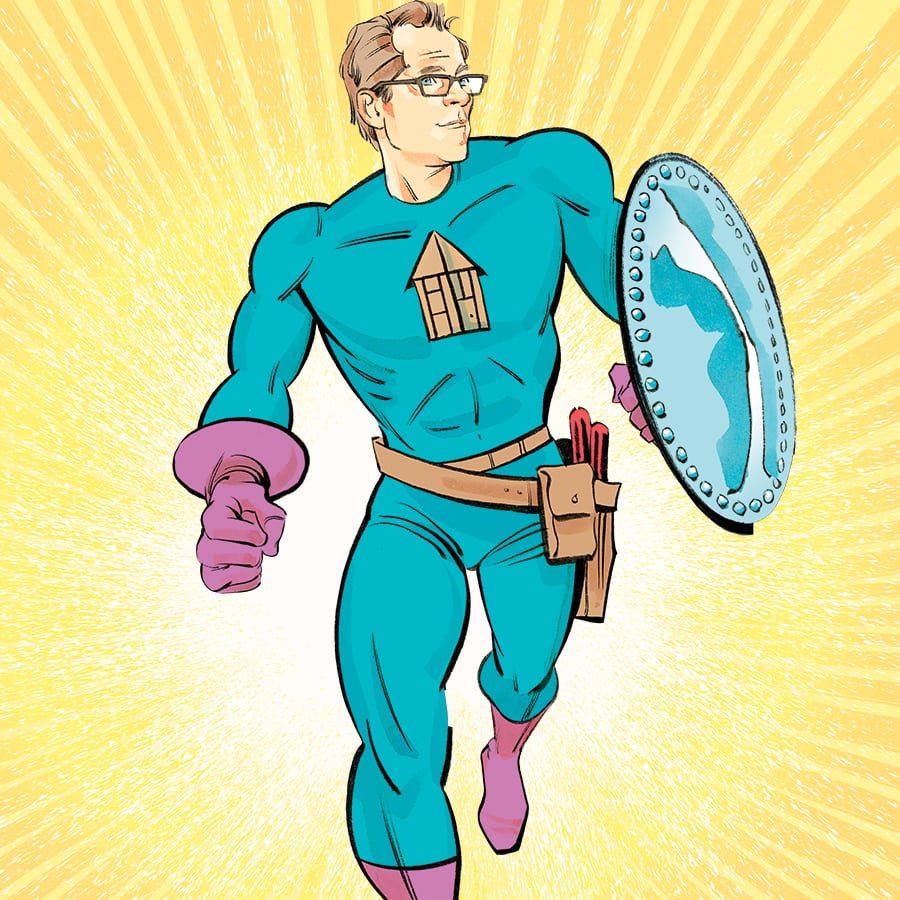 It all started very simply, says Paul Latour. A friend with multiple sclerosis needed help fixing up her backyard so she could access and enjoy the overgrown garden she'd once loved so much. "I thought I could get 20 friends together, have a pizza party and help her out," says Paul. Seven weeks later, about 70 volunteers and 27 businesses had contributed time and supplies to perform a one-day reno that would have cost his friend $25,000. "Not a single person I approached said no; not a single company I asked for supplies said no," Paul recalls. It was then that the Victoria-based artist, writer and waiter realized he could tackle projects on a larger scale .

He soon founded HeroWork, first as a private business and then as a nonprofit, and finally as a charity that renovates buildings for other charities in need. HeroWork's first project was a widely lauded reno valued at $100,000 for the Casa Maria Emergency Housing Society, which provides shelter for families in crisis. Now, the organization has completed its fifth renovation in the Victoria area, and plans for three more are underway. To be selected for a renovation, a charity has to own its building and contribute 20 percent of the value of the renovation, which is largely used to purchase the supplies needed for renos that include everything from electrical and plumbing overhauls to roofing repairs to structural work to landscaping. By 2017, Paul plans to roll out HeroWork's community construction model to other towns on Vancouver Island, and in 10 years, across the country. "It's a franchise for social good." 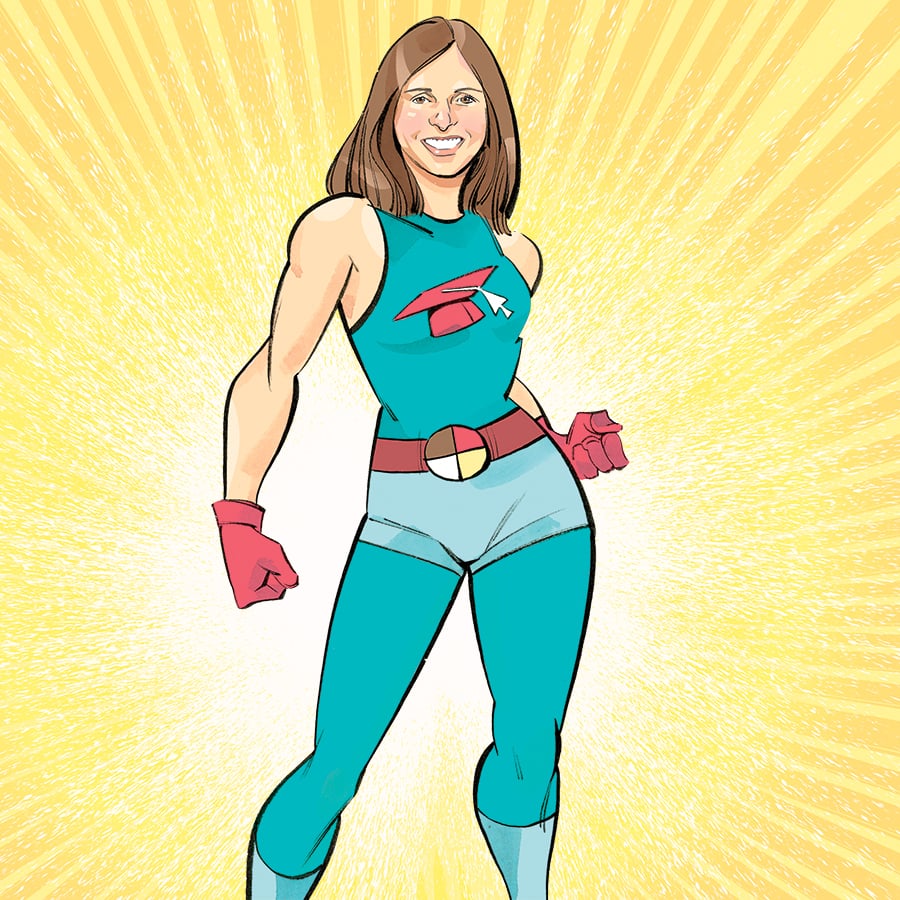 Many kids dream of being doctors or pharmacists or researchers. But by the time they're in Grade 12 and applying for postsecondary education, poor grades or their choice of courses throughout high school may make it impossible to get accepted into a health-sciences program. And although The University of British Columbia's outreach department encouraged Grade 12 aboriginal youth across the province to consider careers in medicine and health sciences, they were sometimes reaching students too late. That's why Sandra Jarvis-Selinger, associate dean academic in the faculty of pharmaceutical sciences at UBC, and her team created Aboriginal eMentoring BC.

Since 2010, the program has reached out to aboriginal youth as early as elementary school. Students work through a fun, interactive online curriculum called Personal Quest and communicate with mentors on an online discussion board, with the goal of helping participants explore possible career paths. To date, 189 youth and 119 mentors (34 percent of whom are aboriginal) have been enrolled in the program. Based on this initiative's success, in 2016, the program will be expanded to include aboriginal and nonaboriginal youth in rural and remote areas of B.C. Sandra says this model could easily be applied to other areas such as engineering, education and humanities, and that it's robust enough to help youth on any postsecondary career path. For her, the most important takeaway is that aboriginal youth understand that, when they graduate from high school, they have choices and feel empowered to make those choices. The positive impact on these young people is already evident. "E-mentoring changed my life," says Rae-Anne LeBrun, 19, now enrolled in the child and youth care counselling program at Douglas College in Coquitlam, B.C. "I was actually homeless when I was in the program. I got to learn who I was as a person, and also to talk about how I felt with people who accepted me and didn't judge me. They wanted to help me along my journey." 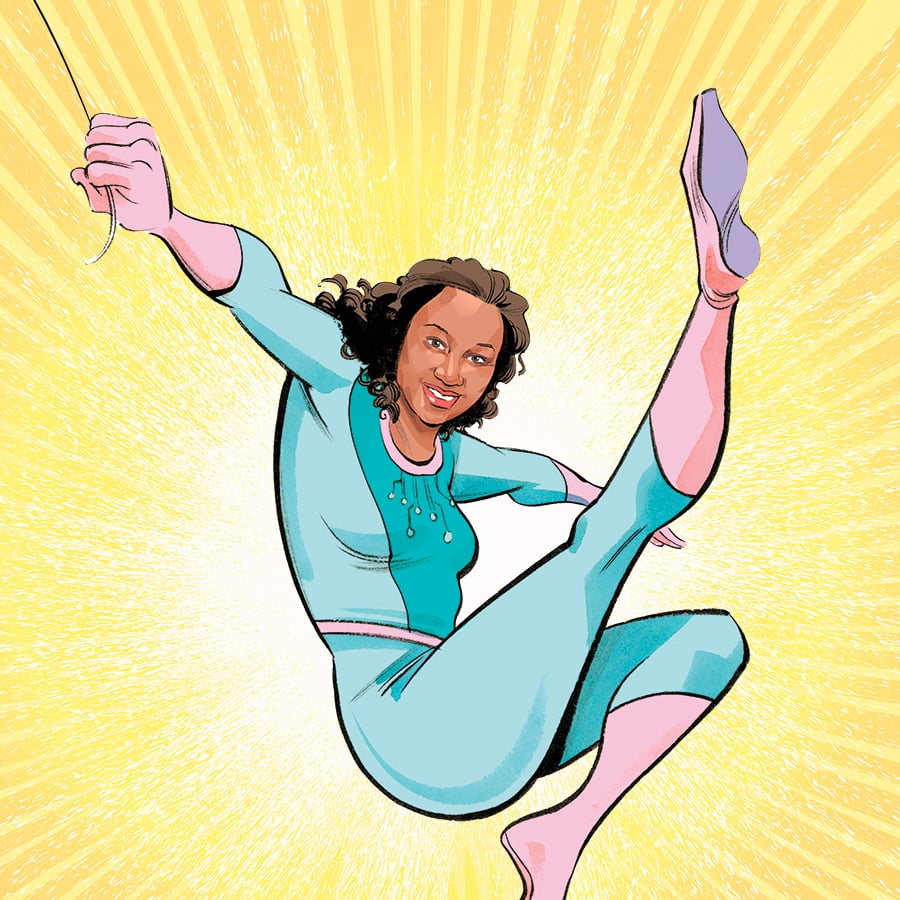 Tamar Huggins Grant noticed that few people of colour were applying to her Driven Startup Program, the nonprofit social enterprise she'd founded in 2012 that aims to help under-represented entrepreneurs take their business to market through advancing training, mentorship and access to capital. It was then she realized she could create a greater impact by reaching out to tech providers of the future. "I wanted to teach youth that they are more than just consumers," says Tamar. "They can create the technology they consume every day." So, last year, she launched Tech Spark (techspark.ca), a program that's free for participants, thanks to funding from the Ontario Trillium Foundation's Youth Opportunities Fund and support from Access Alliance, a multicultural community-services organization. Tech Spark teaches coding and other digital literacy skills such as web development, UX design, digital drawing and mobile gaming to youth aged 15 to 29; it's designed to help develop a new generation of innovators and creators. Through Tech Spark, Tamar focuses her efforts on inner-city communities like Toronto's Weston–Mount Dennis—identified as one of the poorest and most at-risk neighbourhoods in the city—where there are barriers, both economic and social, to learning. In addition to training (the 12-week program runs four to six times a year), Tech Spark provides transit tokens and hot meals, and youth mentors are available to help students with personal issues that may affect their studies. Even more crucial, each Tech Spark session ends with student-internship opportunities at established technology companies like Pixel Dreams, a digital design studio in Toronto. This year, Tamar plans to launch Tech Spark Digital, her own digital agency, where program interns will be hired to do design and development work for local businesses.

"We try our best to provide the students with what they need to be successful," says Tamar, who hopes to expand Tech Spark to other inner-city neighbourhoods in Toronto. "They leave with skills that employers are looking for." For Tamar, the ultimate reward is opening doors for not only Tech Spark students but also those students' siblings and their future children. "Our reach goes beyond the individuals who are part of our program. It means so much to be part of that."

For more on Canadians who are making a difference, check out Tysen Lefebvre's story.

This story was originally part of "Canadian Super Heroes" in the March 2016 issue. Subscribe to Canadian Living today and never miss an issue!

6 Canadians who are making a difference