There's a quiet hum of activity inside Southlake Regional Health Centre's neonatal intensive care unit (NICU). Nurses speak in hushed voices as they check Isolettes (self-controlled incubators) that house the hospital's tiniest, most delicate patients—babies too sick, too weak and too small to go home. The soft glow from the Isolettes bounces through the unit, which is kept warm, peaceful and dimly lit—it's purposely womb-like and puts newborns at ease.

Connor and Kyle are two-week-old twins. Their mother, Krissy, has tucked the boys into her shirt; they look like little joeys, heads poking out of her tank top. Lying on Mom's chest, the babies, born at 32 weeks, instinctively sidle up to each other. Kyle, who's more alert than docile Connor, puts his tiny arm around his brother as they settle in for skin-to-skin time. 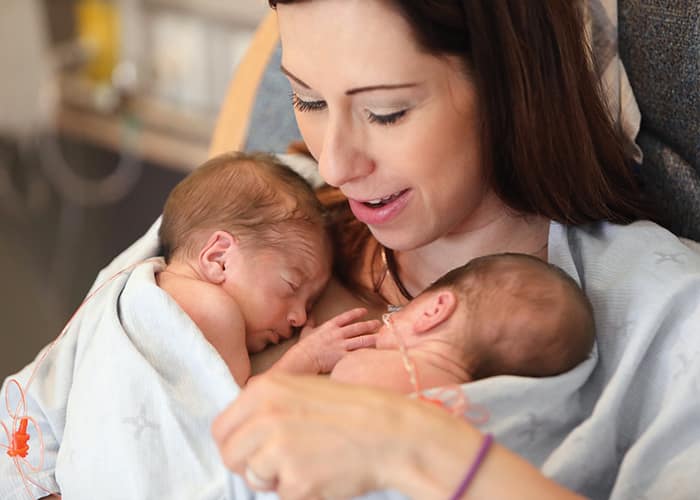 Two-week-old preemies nuzzle up to Mom, who's comforted to know that volunteer cuddlers will step in when she's home caring for her other kids. Image by: David Weingarten

The boys, now free of the masks and wires that helped them breathe, are a lucky pair. Krissy, a mom of four, has help at home with her two toddlers, allowing her to be at the Newmarket, Ont.–based hospital so she can feed and hold her sons, giving them the snuggling all babies instinctually crave and need to thrive.

But there are mothers who can't be there. And when they can't, they rely on a small team of carefully selected, highly trained volunteers to cuddle their babies. "It's a huge consolation for a parent to know that if you can't be there to hold your baby, someone else is there to do it for you," she says as her twins drift off to sleep.

"Babies need to be held—not only to reduce stress, stabilize heart rates and reduce pain but also to support their brain development," says Sandra Payne, Southlake's nurse educator for NICU and pediatrics.

Five years ago, Payne, who's been a nurse for almost 20 years, got a call from a colleague in the NICU asking her to come hug a fussy wee one whose parents were not at the hospital. Payne began jumping in to baby-snuggle but soon realized she needed help to give these infants the attention they needed. It wasn't long before a lightbulb went off for her and her team: Aren't there volunteers who'd be interested in comforting babies whose parents can't be at the hospital 24-7? Payne and her team's brilliant idea sparked the creation of a volunteer cuddle program that's gaining in popularity in hospitals across Canada. Now in its fifth year, the program has a back-to-basics approach: It makes sure babies are given much-needed hugs and snuggle time by volunteers when moms and dads aren't near. 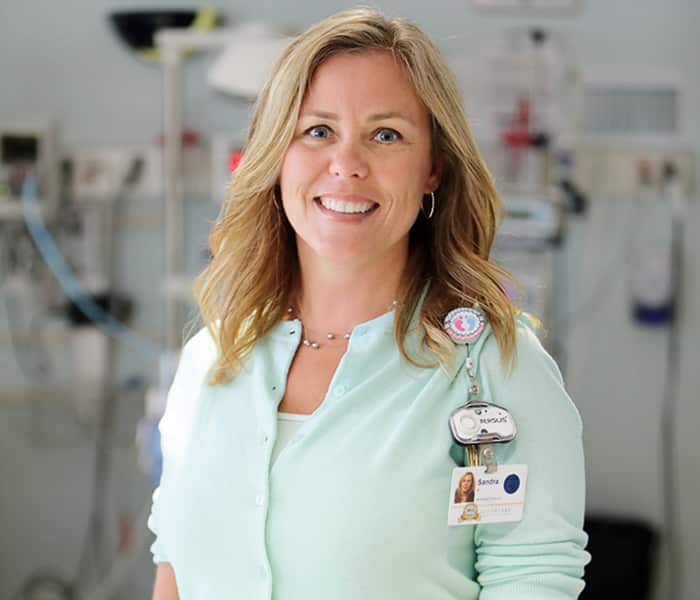 Payne decided to become a nurse after her father was diagnosed with cancer. "His nurse-practitioner taught me how to do his injections at home, and I picked it up fast," she says. "He told me I should become a nurse." When Payne started her rotations, she asked to be placed in the intensive care unit, but the spots were taken. "I was disappointed when they put me in the NICU, but it took only two weeks before I knew it was where I wanted to be placed permanently," she says. "I knew it was where I could do the most good." Earlier in her career, Payne worked on the organ-transplant floor at the Hospital for Sick Children and then in the NICU at Mount Sinai Hospital in Toronto; now, she develops and writes policies based on best practices to benefit Southlake's neonatal and pediatric units. She also trains new staff and runs the neonatal resuscitation program.

Payne was the lead in determining the qualities that Southlake's volunteer cuddlers must possess and she developed the volunteer training program. As a mother of three and a "mama bear" at work (nurses in the NICU are very protective of the babies, she says), she favours nonsmokers, folks who have a background with kids, those who feel comfortable lifting and holding an infant and, perhaps most importantly, emotionally strong individuals with a thick skin—the NICU isn't always an easy place to be.

Having worked with the Canadian Association of Paediatric Health Centres to share guidelines with hospitals interested in implementing their own cuddle programs, Payne says NICU volunteers are putting the scientifically proven advantages of touch into practice every day. "There have been more than 600 studies in the past 40 years about the powerful effect touch has on babies," she says. "These studies show how skin-to-skin contact increases the development of essential neural pathways, accelerating brain maturation and allowing babies to spend more time in quiet sleep, which decreases stress hormones."

Being held skin to skin can also remarkably reduce pain during procedures—babies cry less and appear less agitated. Touch helps babies self-regulate, stabilizing their heartbeats and breathing patterns. "Being held by a caregiver is a natural, no-cost intervention," says Payne. "A baby cries, you pick it up. It's humbling to see how effortless it can be; I just want babies to be held and be comforted." The proof is in the Isolette, where Connor, Kyle and the other cuddled infants lie quietly, contentedly and peacefully.