We chat with Canada's Minister of Environment and Climate Change, Catherine McKenna, review Canada's climate change commitments and discover what we can all do to help.

Prime Minister Justin Trudeau made international headlines when he appointed Catherine McKenna as the minister of environment and climate change in November 2015. With one simple title adjustment, he let the world know that cutting greenhouse gas emissions and embracing a new low-carbon economy are Canadian priorities. Just 26 days later, McKenna, a human rights lawyer, made her debut on the world stage at the Paris Climate Conference. McKenna later spoke with us about her hopes for Canada in the coming years.

Canadian Living: What would you say to someone who doesn't believe climate change exists?
Catherine McKenna: The discussion has moved on from "Is there something called climate change?" to seeing the real impacts [of global warming]. We've seen huge flooding in Alberta and Manitoba. We've seen wildfires in B.C., and Prince Edward Island shrinks by an average of about 28 centimetres every single year. In the Arctic, we have the permafrost melting. There is a growing consensus that we absolutely need to act, or we're going to see even worse climate events in Canada that are going to cost us billions of dollars. The cost of inaction is huge.

CL: What's the plan for reducing carbon emissions?
CM: It's very important that we move forward in partnership with our provinces and territories. Many of them have already taken concrete actions. Our federal government is pretty late, so it's a huge priority for the prime minister. There are market-based systems that help create the right incentives, such as ending subsidies for fossil fuels so we see business development in green technologies. We're also going to significantly invest in green infrastructure and public transit, and encourage the development and use of electric cars.

CL: How do you balance the interests of those with young children with those who work in the energy sector?
CM: By bringing Canadians together—premiers, mayors, youth, indigenous leaders and businesspeople—and not just coming up with ideas, sitting in my boardroom here in Ottawa. We need to reach out to Canadians, listen to new ideas and create the right incentives so we get innovation. I really believe this is the challenge of our generation, but the only way we're going to take concrete actions is if everyone believes that they're in this together.

Climate checklist
At the Paris Climate Conference back in November, the Canadian government agreed to move toward a low-carbon economy. Here's a quick cheat sheet of their commitments.

1. By 2030, the Canadian government will reduce national greenhouse gas emissions by 30 percent of 2005 levels.

2. Canada joined with 195 countries in a pledge to prevent the global temperature from increasing more than 2°C over preindustrial temperatures, with the hopes that the increase will remain below 1.5°C. The planet has already warmed 0.8°C, and climate scientists around the world widely agree that anything more than a 2°C increase would put humans and other species at considerable risk.

3. By 2020, Canada will contribute to a US$100 billion fund for developing countries to help them switch from fossil fuels to greener energy sources.

4. Every five years, the government will submit new, more ambitious carbon-reduction targets that can be evaluated by Canadians and other nations.

Steps forward
What can you do to help? Gernot Wagner, coauthor of Climate Shock, the 2015 bestseller about the economic consequences of a hotter planet, has a few ideas.

Decrease your carbon footprint
Recycle. Use less water. Bike or ride public transit. Take cloth bags to the grocery store. Eat less meat. Turn off the lights and electronics when they're not in use.

Know that you can't stop climate change alone
"It can't be the case that you recycle, then applaud yourself and move on because you have solved global warming for the day," says Wagner. More needs to take place on both government and global levels. So attend public meetings and call, write to or tweet at your MP—or even Minister of Environment and Climate Change Catherine McKenna—to push for a carbon cap or tax, the end of fossil-fuel subsidies or greener infrastructure. Wondering whom to contact? Visit parl.gc.ca/parliamentarians. 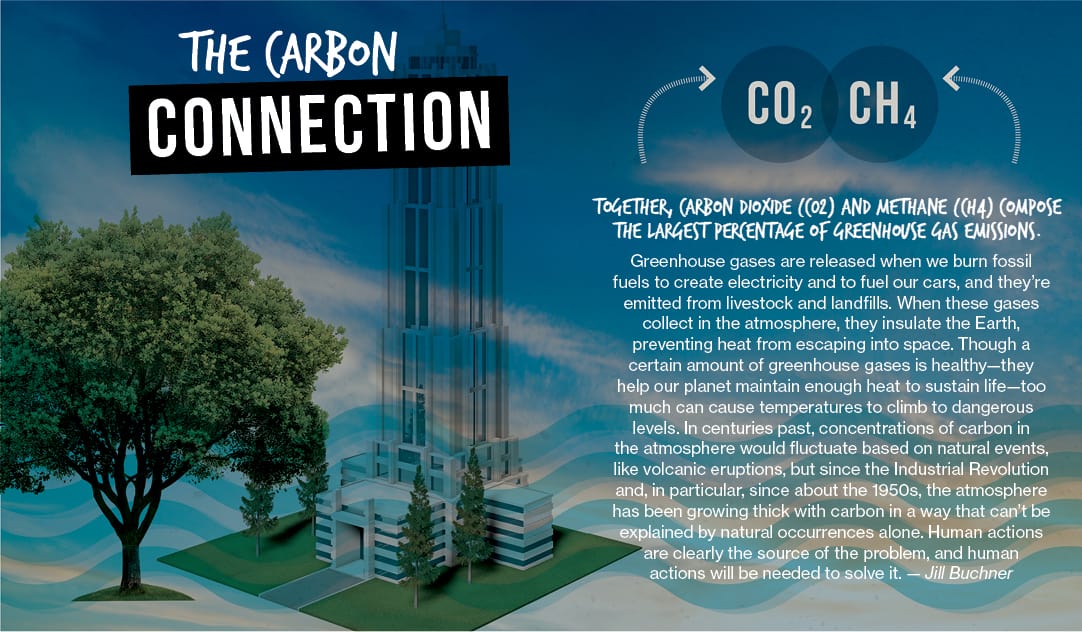 Climate change 101: What it is and what Canada's going to do about it