Share
Governor General's Award-winning author Dianne Warren released another masterful novel in September. In Liberty Street (HarperCollins $32.99), she introduces us to Frances Moon, a fiercely independent and hopelessly flawed small-town girl who will do almost anything to escape the world she grew up in. Warren begins the book with an adult Frances accidentally admitting one of her life's biggest mistakes to her dumbfounded partner, then the author goes back in time to elegantly unravel the earlier years of Frances's life on a farm on Liberty Street. The rich characters from her past help build an almost epic-like history for the beautifully human and quirky Frances Moon. We asked Warren about her inspirations for the novel.

Canadian Living: Did you have any inspirations for the main character, Frances Moon?
Dianne Warren: Like all my fictional characters, Frances began as a composite of characters I've known or observed, but once she developed in the book, she became her own character and ceased to resemble anyone I've encountered in my real-life experiences. As the writing progressed, she began to behave more and more as Frances, and not according to what I had in mind before I began to write the book. Once that happens, a character becomes more interesting and much easier to write.

CL : Like your earlier novel, Cool Water, Liberty Street paints a picture of small-town life. To what extent is this based on your experiences growing up in Saskatchewan?
DW: Most people who grew up in Saskatchewan in my generation were pretty close to their rural roots. My family moved around a bit, but the constant in my life was always my grandparents' farm and I spent a lot of time there. "Town" was a real prairie town, a bit of a mythological place to me because it had been there since the homesteading days and my mother's childhood. This town is not unlike the one in Cool Water. When I was in my 20s I lived on a farm near a town in the boreal forest, so more like the area where Liberty Street is set. I also lived in northern Saskatchewan for a brief time, so my experiences with towns and landscapes in Saskatchewan is pretty varied. In a way, I think of landscapes as neighbourhoods. 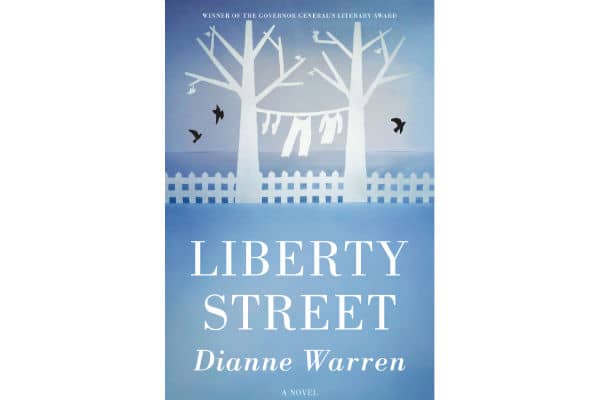 CL : The way you begin the story later in Frances's life, then go back to retrace her earlier years, helps turn her past into a kind of lore. Why did you want to go back and forth with the time frame in this novel?
DW: Frances doesn't understand herself, so it was important to me that the reader see her past in an immediate way. The novel begins in the present with Frances's adult voice, but I chose to back up and tell her childhood story in the third person, without the filter of time, memory or adult mea culpa. That way, the reader can see the choices Frances makes without her current perspective clouding things. I spent a lot of time figuring out how to present Frances when she is at times an infuriating character. I did not want her to be explaining herself in a confessional way. What you see is what you get. That's what I was aiming for.

CL: What was the biggest joy for you in writing Liberty Street?
DW: I loved writing about Frances. She struggles, without realizing it, to be independent, a good person, an individual—and she makes such bad decisions. But she is never a victim—never sees herself that way—and always makes her own choices, good or bad, to get herself out of a mess. I hope people see the humour and empathy in Frances. I enjoyed her immensely, as difficult as she is.

Want more ideas for your fall reading list? Check out our interview with Lawrence Hill about his new book, The Illegal.