Share
Snacking while binge-watching the shows on Netflix is an activity to be taken very seriously. That's why we've rounded up the series that we can't get enough of—and the goodies we'd love to sip and nibble on when we're lost in Netflix land.

Jane the Virgin
This comedy-drama provides big laughs while telling the story of main character Jane's accidental artificial insemination. Non-spoiler alert: Jane's a virgin. The show plays with the Spanish telenovela genre, so it's larger than life and never boring. The characters are so likeable you'll find it hard to turn it off before bed and find yourself wondering how things are going in Jane-land. While watching this series, you'll want to drink a mocktail, of course—like this Apple Pomegranate Sparkler. Also nosh on a grilled cheese sandwich, Jane's favourite food, while watching the hilarity unfold. – Kate Daley

Scandal
In this Washington, D.C.–rooted show the most consumed item is red wine, making it the obvious drink to reach for when couch surfing. This classy bevvy is regularly gulped by the star of the show, Olivia Pope (played by Kerry Washington). You'd guzzle copious amounts of wine too if you were a high-powered "fixer" who happens to be having a torrid affair with the POTUS—draaaaaama! Serious wine drinkers spend way too much time figuring out what to pair with their favourite bottle of vino. Olivia Pope keeps it simple: a big bowl of popcorn.  – Julia McEwen 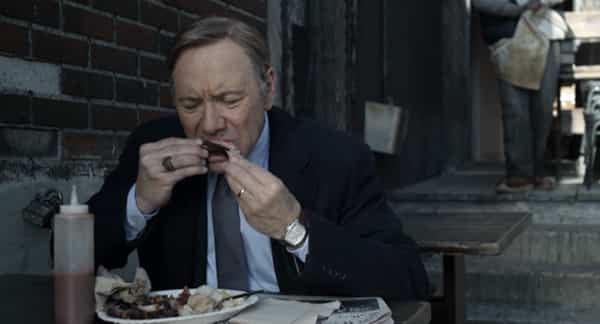 House of Cards
Power-hungry Frank Underwood, played by Oscar-winner Kevin Spacey, will stop at nothing to hold onto the presidency. And I mean nothing. How does he get away with it? Smooth-talking Southern charm and the help of his also-corrupt political allies. This smart and intense show will have you on the edge of your seat, so keep your snacks nearby. Frank's go to? Why bourbon, of course. Frank likes his neat, but you might prefer a classic sidecar. Don’t forget a side order of ribs or boiled peanuts for the full-on southern experience. – Jacqueline Kovacs

The show returns for a fourth season on March 4!

The Mindy Project
Mindy Kaling stars in this rom-com that spends a good amount of time satirizing rom-coms. Mindy plays a slightly misguided Ob/Gyn navigating her personal and professional life with a cast of quirky colleagues. This show is a guilty pleasure without the guilt. Mindy firmly believes in giving into your every indulgence, so watch this show with a full-out candy buffet. Dig into your stash for licorice, gummies, cinnamon hearts and more, and top it off with an equally sugary cocktail that’s more sassy than classy, like a cosmo or sweet martini. – Jill Buchner 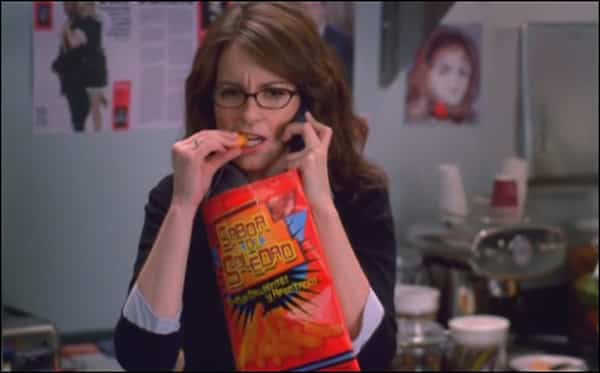 30 Rock
Liz Lemon (Tina Fey), head writer for a sketch comedy show at NBC, dates weirdo boyfriends, hates working out and loves junk food—especially if it's covered in cheese. From Cheesy Blasters (hot dogs stuffed with jack cheese and folded into a pizza) or Mexican bargain cheese puffs to plain ol' blocks of cheese, make Liz Lemon proud by opting to triple (or quadruple) the cheese on whatever you're eating. Wash it down with sun tea, hill-people milk or Irish whiskey. – Jenny Tang

Suits
Mike Ross, played by Toronto’s Patrick J. Adams, is a university dropout that scores a job as an associate at a top New York law firm—and he needs to keep his background a secret at all costs. Each episode focuses on new problems and cases, but it’s the witty repartee between Mike and his boss, Harvey Specter, that keeps us coming back for more. Before flicking on the series, pick up street meat on your way home or cook up some hot dogs, which are the typical lunch-food choice of Mike and Harvey. – Andrea Karr

Narcos
This fast-paced true story of Colombian drug lord Pablo Escobar's rise to power is both interesting and horrifying to watch. Whip up a batch of nachos (beware if you have a weak stomach, as it's a tad graphic) and wash them down with your favourite Spanish beer—but don't drink too much as you'll need your wits about you to keep up with the subtitles. – Kate Daley 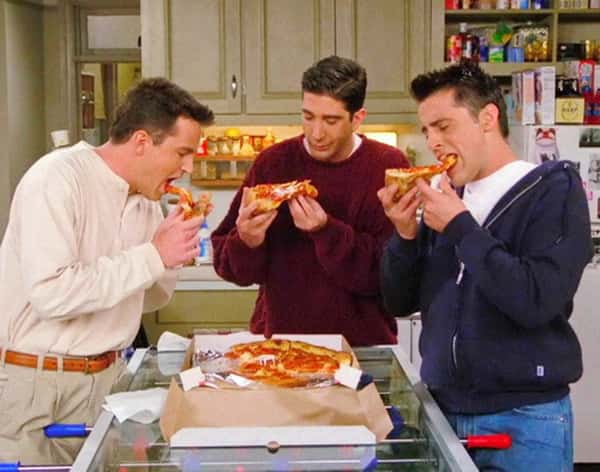 Friends
This 10-season television classic about six friends and their work and relationship struggles in NYC is mindless fun at its best. Flip it on when you’re in need of a little pick-me-up after a long day at work and enjoy the over-the-top acting and hilarious one-liners, many of which still hold up over time (the show ran from 1994-2004).  Watch with a Diet Coke (Rachel’s fave drink) and a “Joey Special”: two pizzas. – Andrea Karr

Homeland
This psychological thriller was made for intense marathon watching. Centred around CIA officer Carrie Matheson’s fight to keep America safe from high-level terrorists while she struggles with bipolar disorder, this show is anything but relaxing. Like Carrie, you may want to have a glass of wine or vodka on hand to calm yourself from the anxiety, but it’s probably best to stick to coffee so you stay alert. Enjoy this one with hummus and pita. – Jill Buchner 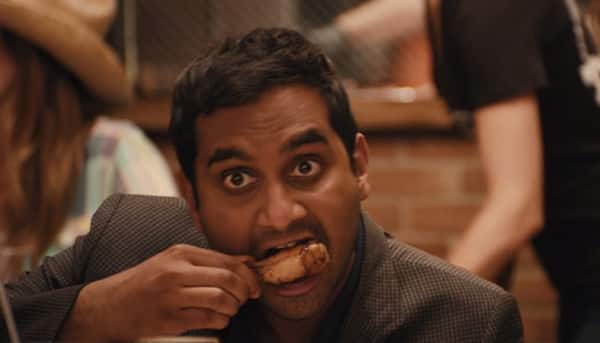 Master of None
Dev Shah (Aziz Ansari) is a 30-year-old actor that's trying to "make it" in New York City, but is mostly known for his Go-Gurt commercial. (He's trying though!) In real life, Ansari loves food (you can catch him eating a fried bologna sandwich in Montreal in another Netflix goody,  The Mind of a Chef), so it's not surprising that food is an important part of Dev's character. Experience Dev's trials and tribulations with a buffet spread of pasta, sandwiches, ice cream, tacos, Chinese food, fried chicken and BBQ—but only if the dishes are from Yelp-approved restaurants. If things get a little dry, whip up a Negroni or sip on a coffee from an indie coffee shop. And be sure to keep some Go-Gurt tubes at the ready. – Jenny Tang

Unbreakable Kimmy Schmidt
If you were trapped underground for 15 years by a cult leader, the first thing you'd do upon resurfacing is eat candy for dinner, too. In the first episode, Kimmy Schmidt (played by Ellie Kemper) enjoys her newfound freedom in New York City by making a beeline to Dylan's Candy Bar to grab some berry gummies. Naturally, Swedish berries are a must-eat for binge-watching this series. Pinot noir is another perfect addition. Watch this video clip to see why. – Julia McEwen