Guest post by Dalal Al-Waheidi, executive director of We Day Global. This is Dalal's first post in a series about activism for canadianliving.com. 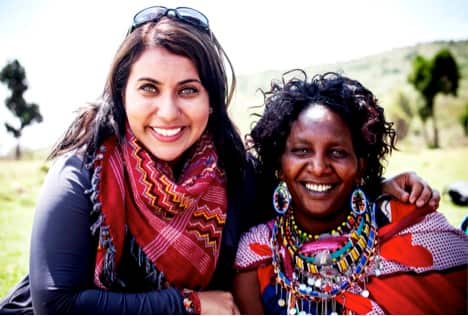 Dalal Al-Waheidi in Kenya with Mama Leah, one of Me to We's artisans. The enterprise offers women the opportunity to earn a reliable income.

My teen years were anything but typical. I entered adolescence living in a place of constant conflict that would never be home. I had to wear a striped school uniform that identified me as a refugee to everyone in the streets of the Gaza Strip. My classes were unexpectedly interrupted with air strikes and power outages, and I had to submit to evening curfews.

I saw young women in my school—some only 15—married off. Others stayed home to help raise younger siblings and do housework instead of getting an  education. There certainly weren't any events like  We Day for me, my two sisters, or other girls to attend. But the experience shaped who I am today: a determined advocate for education, diversity, and women's and children's rights. I was born in Kuwait and my family is Palestinian. When the Gulf War ended in 1991, there was so much hatred towards Palestinians. I was called derogatory names. My parents were educators but they were no longer allowed to teach in public schools. My three siblings and I were banned from public school.

My parents reluctantly moved our family to the Gaza Strip, where they're originally from. So, when I was 12, I went from one place of war to another.

It was so strange to see so few opportunities for girls and women. Fortunately, my parents were progressive and let me take leadership courses after school at a local YMCA. My joy was leading a kids' discussion group, in which we talked about everything from the food at home to the occupation. Then when I turned 17, a new door opened up. I received a scholarship to go to Norway and study with Red Cross Nordic United World College. I was so nervous about all the changes—a new country, culture, and language—but there I felt free. I was free to study with both men and women, free to meet new people and openly discuss ideas, free to move about without a curfew and free from being stopped and asked where I was going. From there, I came to Canada on another scholarship. At Trent University, I completed a degree in political science and international development. It was an internship at  Free the Children in Toronto that kept me in Canada. At the organization, I was intrigued by all the young women I saw in leadership positions, and youth who were given a voice in helping to solve global problems, like poverty. I knew it was the right place for me. In January 2013, I started in my current role. It's a privilege to make the We Day stage a truly inclusive space that allows people of different genders, ages and race to talk about their perspectives on so many issues, from  bullying and hunger to climate change. In late March, I took on another important role. I am a new mother. My daughter, Zeina, validates why my work is so important – and why I am in Canada. I know that, here, she won't become one of the hundreds of thousands of girls who doesn't go to school, or dream about opportunities. I know I am helping to create a more just and equal world for Zeina, and other young people. Learn more about  We Day and how it benefits youth.

Meet Dalal: One woman's journey to a new world of opportunity