What happens when a couple embarks on an open relationship? That's the primary question in author Zoey Leigh Peterson's latest, Next Year, For sure. We chatted with her about the pitfalls of the literary love triangle and why it was so important to avoid stereotypes.

In this debut novel by Vancouver-based author Zoey Leigh Peterson, the story of Kathryn and Chris (a couple who has been together for almost a decade when Chris falls for another woman) unfolds in the tiny moments: pillow talk made honest by the darkness; mattress shopping as a friendship falls apart; and awkward, lovely hours-long dates. There's no complicated plot, no sweeping narrative; instead, Kathryn and Chris "stumble into polyamory," as the book synopsis says, a description that seems unrealistic at first but turns out to be a highly accurate account of their evolving relationship.

It starts with a camping trip. Chris often runs into Emily at the Laundromat, where, one day, shy but infatuated, he asks her to house-sit while he and Kathryn go away for a long weekend. It's clear that, while he loves his partner, he can't get Emily out of his head; prior to the trip, he rearranges their books and even takeout menus to show himself in the most compelling light.

When he tells Kathryn about his feelings, she encourages him to ask Emily out on a date. Kathryn is secure in their love, sure that he just needs to get the infatuation out of his system. "People get crushes….I get them all the time," she says. What comes next is a complicated, sensitive and honest account of a relationship in flux, prompting readers to consider the tension between wanting your partner to be happy and the personal sacrifice required to make that happen.

Read on for our interview with Peterson, who reveals the story's origin as well as her take on relationships and how she writes realistic characters.

Canadian Living: What inspired this story?
Zoey Leigh Peterson: I had the characters of Chris and Kathryn in my head for a while; I knew their general situation, but I hadn't found a way into their story yet. Then, I was getting ready to go out of town and had a house sitter coming over, and I started thinking about what this person was going to learn about my life by living with all of my things for three or four days. What does the food in my cupboard say about me? And what will someone conclude from looking at the books on my shelf? I realized it was a really intimate and vulnerable window into someone's life, then I figured, OK, that's how I get into these peoples' stories.

CL: Is it true that the book started out as a short story?
ZLP: I conceived it as a novel. I was washing dishes when I thought, Oh, this is a novel! But I hadn't written one before; I hadn't even been doing much writing for several years, so I didn't want to take on something so ambitious. I thought I could just say it was a short story, then I wouldn't have to embark on the incredibly arduous task of writing a novel, so I wrote a short story from Chris's point of view, which eventually became the first chapter. But I kept thinking about Kathryn, so I wrote what became the second chapter from her point of view. Then, I realized the story wanted to be a novel, needed to be one; that's when I started mapping it out.

CL: What themes were you trying to explore?
ZLP: The main thing was loneliness, not the kind that comes from being alone and unattached— although I think that can also be a very profound loneliness—but the kind when you're in a really good relationship. You're happy, you can't imagine a person who is more compatible, and yet, you're kind of lonely together. It happens particularly when a lot of your old friends are starting to drift away into family or career or other priorities, and it gets hard to stay connected and intimate with them, and that feels very isolating. That was the main thing drawing me to this book and to these two characters.

CL: None of the characters is unlikable; there isn't a stereotypical "other woman." Was that something you kept in mind while writing?
ZLP: Very much so. Particularly with Chris and Kathryn, I didn't want to make them perfect. I wanted to make them flawed and vulnerable. I knew that would bring up feelings of annoyance or frustration or even dislike in readers, but I wanted to invest in them as people and as characters. I actually feel like all of the other characters are at a bit of a disadvantage because we never see anything from their perspective.'

CL: Chris and Kathryn are the linchpins of the story, but the other connections—between them and Emily, between Kathryn and her best friend, Sharon, and between Chris and his mom—are also very rich. What is it about relationships that appeals to you as a writer?
ZLP: Part of it is that I'm interested in the complexity and nuance of the different ways you can relate to other people. There are so many variations on the way those relationships can play out, but as a culture, we're somewhat reductive in how we think and talk about them. We say, "He's like a brother to me," as if the experience between all brothers is universal, when brotherhood is so individual. I was interested in giving the relationships in the book the room to be the way they were—to be unexpected and unconventional, nuanced and complex.

CL: Did you know how you wanted the story to end when you started writing it?
ZLP: I knew the general trajectory that I wanted [the characters] to follow in the first couple days of thinking about it as a novel, and the scene I wanted to end on, maybe three to six months into the process. But I knew from the beginning that I wanted it to be complex and true to life. 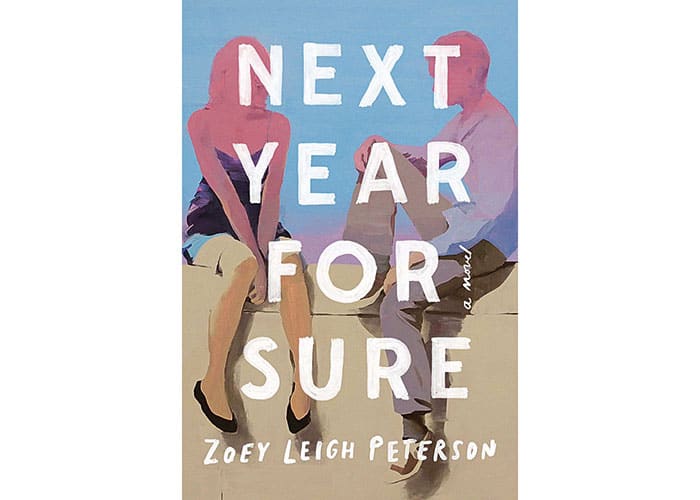 Next Year, For Sure (Doubleday Canada) by Zoey Leigh Peterson, $25.

5 must-read books to cozy up to this winter

Whether you're into historical fiction, page-turning thrillers or revealing memoirs, we've got something for everyone to add to their winter reading list.

Zoey Leigh Peterson on her debut novel, Next Year, For Sure