Share
The call wasn’t unexpected. Dad had a long, arduous, weary war with cancer. It was time. And we had a beautiful goodbye.

He defined himself first and foremost as a father. It was the job he loved most. Dad was an unconventional man in terms of modern masculinity, and it was lovely. He was gushingly affectionate with my two brothers and me; he would hug and kiss us even as adults. He was gentle and tender. In my 45 years of life, I don’t recall him ever raising his voice, let alone his hand with aggression.

From that moment in December until now, I’ve reflected upon many things, but mostly fatherhood—his and mine. How did my father affect my fathering? What was distilled into me?

Dad was a natural host. Not because he could cook, whip up snazzy cocktails or set a Martha-worthy table; in fact, he was a horrendous cook. Mom wouldn’t let him feed us. (He “made” great toast and lovely tea, though.) But what he instinctually brought to every gathering was far more valuable than tableware and tasty appetizers: Dad brought joy. And it wasn’t work for him; it was who he was. He could somehow create a pause in the daily grind so people could create incredible memories. Bringing joy was his joy.

From him, I learned that joy is created by what we don’t react to. Like sidewalk cracks budding delicate flowers, when life’s crap is put on pause, love grows. He was great at creating a moment in which people simply did what they do naturally: Connect.

Deep down, in our own way, we’re all natural hosts. It’s not really about the food and wine; it’s about conversation, a grin, listening—indefinable moments born in an environment of unobstructed togetherness.

Obviously, as a father, I’m entrusted with the greatest responsibility of all. But beyond food, shelter, education and health, what do I have to give that’s me? 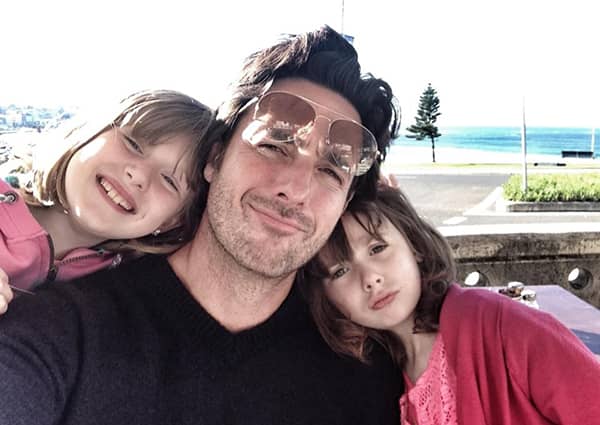 I bet if you recall the warmest moments you’ve ever had with your family and friends, they were around a table. You might not remember what you ate, but you remember where you were, who was there, how late you stayed up—and it was food that brought you to the table.

It doesn’t matter what the food tastes like; it slides over your tastebuds and is gone in a moment. But the pause it forces us to take in life is its power. It’s no accident I do what I do for a living. Talking about food and its capability to help create life’s defining moments is my thing. My joy.

As long as my daughters’ little bodies are well nourished, I don’t care too much if they like my cooking. I adore, however, that over the meal we’re creating something far more lasting than the fridge-scrap dinner they’re grumbling about.

I’m lucky to have had a father who felt that being a father was the only job that mattered. He did his job by merely gathering us together, then we did the rest. As long as I can continue to bring my girls to my table long after they need to be there, I’ve done my job.

Read more:
How your relationship with your dad affects your romantic relationships
10 best books for Father's Day 2016
Daddy's girl: The story of the best/worst relationship of my life
Adorable photos of our favourite celebrity dads
40 Father's Day gifts under $50
Justin Trudeau: Snapshots of Canada's favourite dad
Dad and me: CL editors talk about their papas
My dad died in his sleep, and I never got to say goodbye
As soon as I saw my son, alarm bells went off in my head

After my dad died, I realized that being a father is the only job that matters