Apert syndrome is a rare condition caused by a random genetic mutation, which can happen for reasons unknown. It's also difficult to detect in ultrasounds, which explains why Dennis Ku was in shock when his wife delivered their son Marshall. Here is his story of caring for a child with a craniofacial disorder and what he has learned from his miraculous boy.

I used to joke about having 11 children so I could field my own soccer team. Just imagine: the entire Manchester United "starting 11" composed of my offspring!

This joke probably didn't help me much on dates, and when I met Bridget, she wasn't even sure she wanted to have kids. But we eventually reached a compromise: We wouldn't have a soccer team; instead, we'd start with one and take it from there.

Quinn was born in 2011 and things were incredible. Sure, we went through the first-time parenting struggles of fatigue and crying (mostly from the baby), but life was awesome. Our beautiful little boy was the apple of everyone's eye, especially his overjoyed grandparents. "Let's have another," Bridget and I said to each other. She wanted Quinn to have a sibling, and I started to wonder if maybe—just maybe—my dreams of a soccer monopoly would come true.

Parenthood is supposed to be easier the second time around. You know what to expect, how many diapers you're going to change and that when your son is sleeping soundly, there's no need to poke him to make sure he's breathing. For the first time in my life, I felt like my expectations were on solid ground. I knew what was coming; I wasn't scared or unsure. I was ready.

Marshall joined our family in February 2015. Like Quinn, he was born at home after an uneventful pregnancy and reassuring ultrasounds. I heard his cry as he emerged from his home of the past nine months, but as soon as I saw him, alarm bells went off.

His hands looked different. His head looked different. He struggled to breathe. The midwives quietly conferred before calling an ambulance. We were rushed to our local hospital, Marshall in my arms, tears running down my face, my expectations in tatters.

By the time we got to the hospital, we knew he needed constant oxygen. His fingers were fused, a condition called syndactyly. His cranial shape wasn't typical: His eyes protruded slightly and his forehead seemed larger than usual. He looked so different from his brother at birth. When we were transferred the next day to The Hospital for Sick Children in downtown Toronto, a doctor confidently told us that Marshall had been born with Apert syndrome, a condition caused by a single genetic mutation that leads to craniofacial and hand differences, as well as a host of other possible health issues.

Obviously, we were shocked. During the pregnancy, there had been absolutely no indication that Marshall would be anything but pink and healthy when he came into the world. We spent weeks at the hospital, touching our little baby as he lay in the neonatal intensive care unit, struggling to survive.

The social worker assigned to us helped put my grief into words: I was heartbroken because my son was going through so much pain and stress, but I was also grieving the loss of my hopes for our future. We were still in the process of educating ourselves about Apert syndrome, but we already knew that the road ahead would be difficult. Would my son have a healthy life? 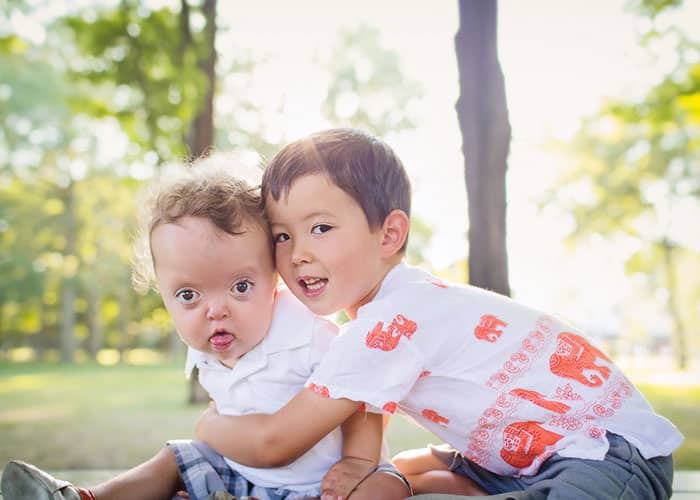 Eventually, Marshall came home, but then he returned to the hospital. And the cycle continued: home again, back to the hospital, home once more. Most of our friends and family rallied by our side. Some people didn't know what to say or what to do. To be fair, neither did we.

I cried and fretted every night. But Marshall, unaware that he was different from his brother and most of his peer group, radiated love to everyone who saw him. Our neighbours adored him. A stranger at a local coffee shop asked to hold him, and I sobbed silently while she cuddled him, telling him he was beautiful and perfect. And, most importantly, we loved him. We love him. Despite the fact that our nights with Quinn in his first year now feel like a restful paradise, nothing gives me more joy than to soothe Marshall back to sleep in my arms, stroking his curls and singing him the same songs my mom sang to me nearly 40 years ago.

Marshall turned two recently, and things are more settled. There are a lot of changes during the second year for any child, but for Marshall, they've been even more profound. He had a syndactyly release procedure when he was 18 months old, which has given him the gift of fingers, and now, he's learning how to use his unique hands. They will always work differently from mine—he can't bend his fingers, but he can hold my hand while we saunter down our street. He can hold utensils as he learns to feed himself. I am most proud when I see him draw at his little table, crayons in his stiff digits.

Marshall continues to light up every room he enters. Hearing his excited voice shout "Yeah!" in response to questions is priceless. He's feisty and tough. He's had to be, to go through so many surgeries. Perhaps his resilience is what I have most absorbed through being his father these past couple of years. My problems are petty and inconsequential compared to his obstacles. Already in his short life, Marshall has been through, and will overcome, more than I will in a lifetime.

Fatherhood has taught me not to take anything for granted. Life is truly precious, and my family is a blessing I'm fortunate to have. While both of my children remind me of the beauty of childhood, Marshall also reminds me that sometimes love is enough to carry you through the day.

What I've learned from my amazing son with Apert syndrome