Share
Share
Truthfully, I thought that Emily Blunt's head-to-toe getup was a wee bit too summery (very Grecian Goddess), which is sort of weird since it's the start of January. That being said, the whole packaged did look ethereal and cohesive, largely impart to the beauty of her hair and makeup. [caption id="attachment_15760" align="aligncenter" width="398"] 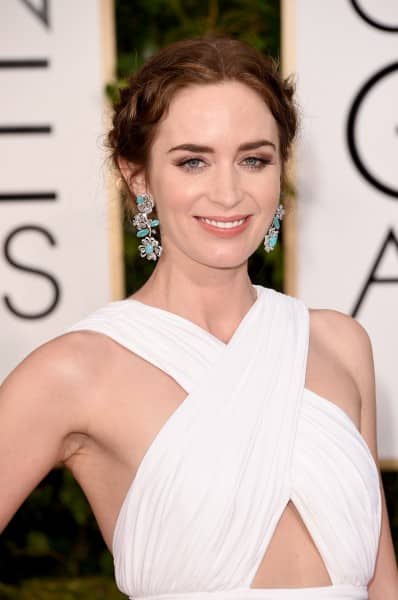 Blunt's makeup was painted on by pro Jenn Streicher, but before she used any colour cosmetics her canvas was prepped with Kiehl's Ultra Facial Cream and Cream Avocado Eye Treatment. After, the Kiehl's Micro-Blur Skin Prefector was used as a primer, Dior's Star Makeup followed with a few strategic strokes of Dior Star Brightening Concealer. Her shimmery earthy-toned eyes were created with a mix of two Dior eye palettes, a darker brown shadow was used in the creases and the outside corners and lower lash line. Dior's long wearing cream shadow in Chimere was applied over the entire lid to give her a smouldering look without it looking like a typical smoky eye.

Hair Her Grecian-inspired braid was created by Blunt's long time stylist of nearly 12 years, Laini Reeves. As suspected, the flowy white Michael Kors gown was indeed the inspiration for the braided crown. The idea was to give her a youthful updo that wasn't too perfect. Reeves created a center part and braided each side, then criss-crossed the braid in the back and secured them with bobbi pins. Check out other 2015 Golden Globe Awards content: Golden Globes best dressed list Jessica Chastain's beauty look Lorde's beauty look

Get Emily Blunt's beauty look from the 2015 Golden Globe Awards