Share
ReFresh: Contemporary Vegan Recipes by Ruth Tal with Jennifer Houston (Wiley, 2007)
Canadian cookbook!
ReFresh is an update of the Juice for Life cookbook. They have relaunched their group of restaurants in Toronto under the name “Fresh” and have expanded the repertoire to include light vegan food as well as their signature blender drinks and smoothies. This cookbook is primarily vegan, with the exception of the use of honey. The recipes use a good selection of pulses, grains and beans and - of course - include chapters on juices, elixirs, power shakes, smoothies and cocktails for the juicing enthusiasts. 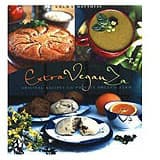 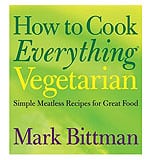 How to Cook Everything Vegetarian by Mark Bittman (Wiley, 2007)
Mark Bittman follows up his highly successful How to Cook Everything with this vegetarian version. This is a great resource for a budding cook and satisfies the full range of vegetarianism from vegans to people looking to incorporate more vegetarian dishes into their diet. A comprehensive cookbook with chapters on stocking a kitchen and basics of cooking, this would be a great gift for a young adult striking out on her own. 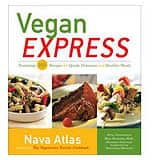 Vegan Express by Nava Atlas (Broadway, 2008)
Nava Atlas follows up The Vegetarian Family Cookbook with this express version of quick vegan recipes for everyday cooking. The recipes include nutritional analysis, menu suggestions and great tips and serving suggestions and alternatives throughout the book. The introduction provides valuable information and resources for anyone looking to take the plunge into a vegan lifestyle, with especially good information for cooking vegan for the whole family.

Page 1 of 2 Vegetarian Suppers from Deborah Madison's Kitchen by Deborah Madison (Broadyway, 2007)
Beautiful photography illustrates Deborah Madison’s approach to the dilemma of vegetarian mains. Although she suggests these dishes for casual suppers, many of her recipes would be equally splendid at a more sophisticated dinner. Fresh ingredients and balanced flavours are highlighted in every recipe. An added bonus is Greg O’Bryne’s wine pairing suggestions for every recipe, which can sometimes be a challenge for vegetarian cuisine. 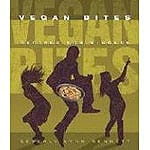 Vegan Bites: Recipes for Singles by Beverly Lynn Bennett (Book Publishing Company, 2008)
This cookbook is perfect for a young single striking out on her own or the new vegetarian or vegan in the family. In addition to a ton of fast, hands-on finger foods there are lots of "special occasion" - type recipes - such as Marvelous Mashed Potatoes and Oven-Baked Bread Stuffing that will complement holiday feasts without scaring the rest of the family. There's a comprehensive glossary in the back without being overwhelming, and the best part is an introductory section called "Young and Ambitious" addressing young singles and their choice to become vegan. 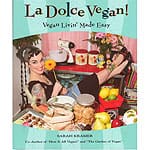 La Dolce Vegan: Vegan Livin' Made Easy by Sarah Kramer (Arsenal Pulp Press, 2005)
Canadian cookbook!
La Dolce Vegan is full of personality and reads much like a small-town church cookbook, but for vegans, written with lots of style and fun. Most recipes are author Sarah Kramer's, but some recipe contributions from other cooks include their personal notes to Kramer - who tests all the recipes - plus Kramer includes her own notes about the recipe afterwards. And if you're looking for "faux" vegan recipes, this is the jackpot with an entire chapter - "Faux fare". Also included are earth-friendly crafts and eco-cleansers for the kitchen.

Eat, Drink & Be Vegan: Everyday Vegan Recipes Worth Celebrating by Dreena Burton (Arsenal Pulp Press, 2007)
Canadian cookbook!
Eat, Drink & Be Vegan is full of tempting recipes suited for advanced palates seeking to entertain or just to expand their vegan repertoire with new, gourmet vegan ingredients. Burton includes Canadian brand recommendations - such as Manitoba Harvest - and also has an In Season glossary to make smart food choices even easier. She has a few recipes kids enjoy too, such as her Kids' Dynamo Hummus or Nice Krispie Squares. Her desserts are also not your typical vegan fare, such as Lime Sucker Coconut Pie and Cashew Banana Ice Cream.