Why Ontario's Entomo Farms is betting on edible insects and putting crickets on restaurant menus for Earth Week 2017.

Like it or not, insects are an age-old, affordable and sustainable alternative protein consumed around the world. In Canada, we’re seeing them pop up on specialty grocery store shelves and restaurants are catching up on the trend thanks to a handful of up-and-coming local insect farmers.

Chiropractor-turned-cricket-farmer Jarrod Goldin is betting on the future of edible insects. He co-founded Ontario-based Entomo Farms with his brothers three years ago. When asked how one gives up a career in health care for cricket farming, he says, “Well that’s a great question and one my mom asked when we got started on all of this.”

“As a practicing chiropractor for 20 years and teaching at the chiropractic college, I’ve spent a lot of time with patients understanding their health and understanding the relationship between what we eat and how we feel.” The more Goldin learned about the food industry, the more he developed a keen interest in sustainability and the impact that his food choices were having on the planet.

When the United Nations and the Food and Agricultural Organization came out with their 2013 paper called “Edible Insects-Future Prospects for Feed and Food Security” it further piqued Goldin’s curiosity. After seeing a pitch on the TV show Shark Tank during which an edible-insect entrepreneur won over investor Mark Cuban, Goldin knew it was time to break into the business. He launched Entomo Farms with his brothers Darren and Ryan, who had already been professionally farming insects for the purpose of pet and fish feed for 10 years. He said to his brothers, “'Why don’t we start North America’s first human-grade insect farm?' The rest, as they say, is history.” They have since grown from a 5,000- to 60,000-square-foot facility with three retrofit chicken barns which can each house 35 million crickets.

Today, Entomo Farms sells all things edible, from snack-size whole roasted crickets and mealworms to the more approachable ground insect powders. With these powders, curious cooks can make anything from cricket pizza dough to mealworm linguine while essentially hiding the protein inside the dough. If that’s too adventurous, they recommend you try a little sprinkle in smoothies, soups or stews. They even offer some certified organic products.

When it comes to taste, cricket powder has an earthy taste but compliments a lot of other savoury flavours and also hides well. In a pizza crust mixed with all-purpose flour, for example, it resembles a whole-wheat crust and is delicious when paired with toppings such as aged cheddar and mushrooms. Conversely, blended into a sweet smoothie, you would be hard-pressed to know it was even there.

“It’s actually anti-climactic to see someone try it for the first time because, I don’t know what they’re expecting but they taste it and there’s a familiarity and they say 'Wow…that tastes just like…food,'” says Goldin.

The practice of farming crickets for human consumption sounds like an odd venture, but environmental responsibility is serious business for Goldin.

“Unfortunately cows are not great converters of feed to food,” says Goldin, referring to the large amount of fresh water it takes to produce each pound of edible beef. According to the U.N. and F.A.O., it takes 10,000 litres of water to produce one pound of beef protein and less than 1 litre to produce a pound of insect protein. “The best example I like to give is that if a family of four were to choose insect protein just one day a week for a year—cricket powder in some muffins in the morning, in a pizza crust in the afternoon and in the evening they put a few scoops into a vegetarian chili to get their full daily protein—they would save the planet 750,000 litres of water.”

“The meat industry is (also) responsible for about 20 percent of all carbon emissions. So unfortunately even though steak is delicious, it’s just not that sustainable,” says Goldin. He adds that crickets and mealworms, on the other hand, emit almost no methane gas.

Some research on the potential health benefits of insects is also underway. Entomo Farms has been working with Massachussets' Tufts University and its Human Nutrition Research Center on Aging and preliminary unpublished research has pointed to insects' immune-system boosting properties, says Goldin.

Nutritionally, Goldin says crickets are 60 percent protein, and are very high in fibre, B12, iron and calcium, with double the essential amino acids (by weight) compared with beef. “They are a powerhouse of protein, fibre, vitamins and minerals and are more absorbable by our gut, too.” 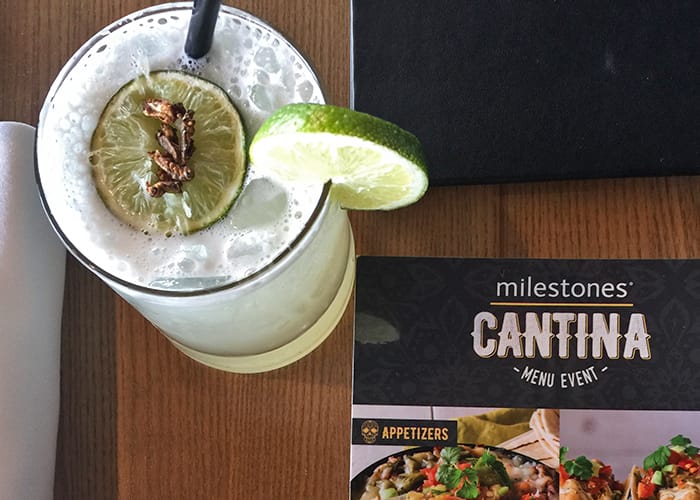 In celebration of Earth Week 2017, between April 16-22, Entomo Farms has teamed with about 50 restaurants in Ontario including Milestones to feature menu items that include their insect proteins, from cricket-infused poutine to cricket-and-salt-rimmed Margaritas.

Are insects the 'power protein' of the future?