That conundrum is one of the things that inspired Victoria Walsh, a Toronto recipe developer, and her husband, Scott McCallum, to write a book that would allow their countrymen and women to get familiar with the regional libations of our home and native land. The result: A Field Guide to Canadian Cocktails (Appetite by Random House), which hits bookstores Oct. 20.

"We've been interested in cocktails for some time," says McCallum, an actor who's also worked more than a few shifts as a bartender. The couple hosts pop-up dinner parties at their home, where foodie friends pay a flat fee to experience an evening of exceptional food and drink. Walsh handles the menu and McCallum takes care of the beverages. McCallum has looked over many existing cocktail guides and finds them to be very American, with many calling for ingredients that aren't readily available here. "A Canadian version of those books just hadn't been done," he observes.

The couple had already travelled extensively across the country—McCallum had even been to Yukon, home of the famous Sourtoe cocktail (whose not-so-secret ingredient is an actual human toe)—and knew they'd enjoy visiting more places in the name of research. For example, they parlayed a trip to P.E.I. for McCallum's parents' anniversary into an opportunity to hit up the cocktail scene in Nova Scotia, New Brunswick and Quebec. "It's a huge country," McCallum notes. "We did our best to get everywhere." 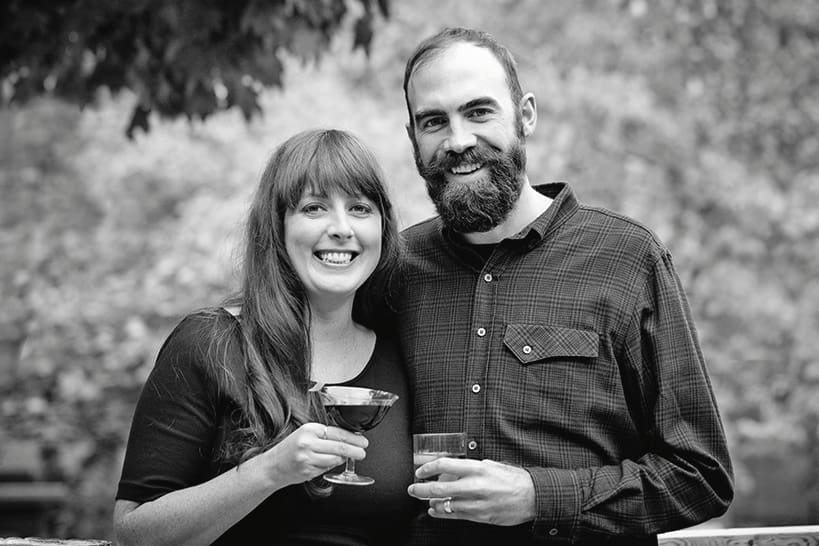 Some of the recipes in their book are step-by-step recounts of drinks they discovered on their travels, while others are odes to places where they spent time. "It's so open-ended, what makes a cocktail Canadian," says Walsh. "It could be a great bartender, an ingredient from a farmers' market or great liqueur that's produced locally. A lot of the recipes in the book incorporate more than one of those elements."

Flip through the 214-page volume, which is organized both geographically and by topic, and you'll find soon-to-be classics such as The Double Double, a riff on the popular Tim Hortons coffee order; Labrador Iced Tea, an East Coast Canuck incarnation of the classic Long Island Iced Tea; and, yes, a version of the Yukon Sourtoe that replaces the human digit with a pickled morel mushroom (phew!).

Originally, Walsh and McCallum published their burgeoning collection of Canadian cocktail recipes on a website, but fate and a coffee meeting intervened. "I'd pitched lots of magazine stories before, but I'd never pitched a book," says Walsh, who arranged a meeting with someone from Random House who suggested that Walsh and McCallum create the book first, then shop it around. It sounded like a long road ahead, but the couple were already committed to creating the content whether they got a book deal or not. As luck would have it, 20 minutes after the meeting, Walsh received an email from her publishing contact, who'd mentioned the Canadian cocktails project to Robert McCullough of Random House's Appetite imprint. It turns out the publisher had been looking for just such a manuscript and asked Walsh and McCallum to send over a proposal.

The finished book, Walsh says, is as much a travel guide as a recipe book. "It's 50 percent armchair reading."

Check out these delicious summer cocktails from Saskatoon.