Share
Korb Whale still remembers when his workday began at 5 a.m. Like his father and
his grandfathers before him, the Alma, Ont., dairy farmer would rise before dawn to herd cows into one of 12 milking stalls and attach them to the milking machine’s teat cups by hand—twice a day, every day of the year.

Now, thanks to new farming technology, Whale can sleep till 7 a.m. while his 140 Holstein and cross-bred Norwegian Red cows are milked automatically by machines. As the cows wander freely through the barn, tracking necklaces monitor their health and milking habits.

The result: thousands of litres of omega-3–rich milk every day—something Whale, a seventh-generation dairy farmer takes pride  in. “The milk quality is significantly better than it has ever been,” he says. “We’re doing the same thing we’ve always done—we’re feeding cows and we’re milking cows. We just do it at such a fine level now.” 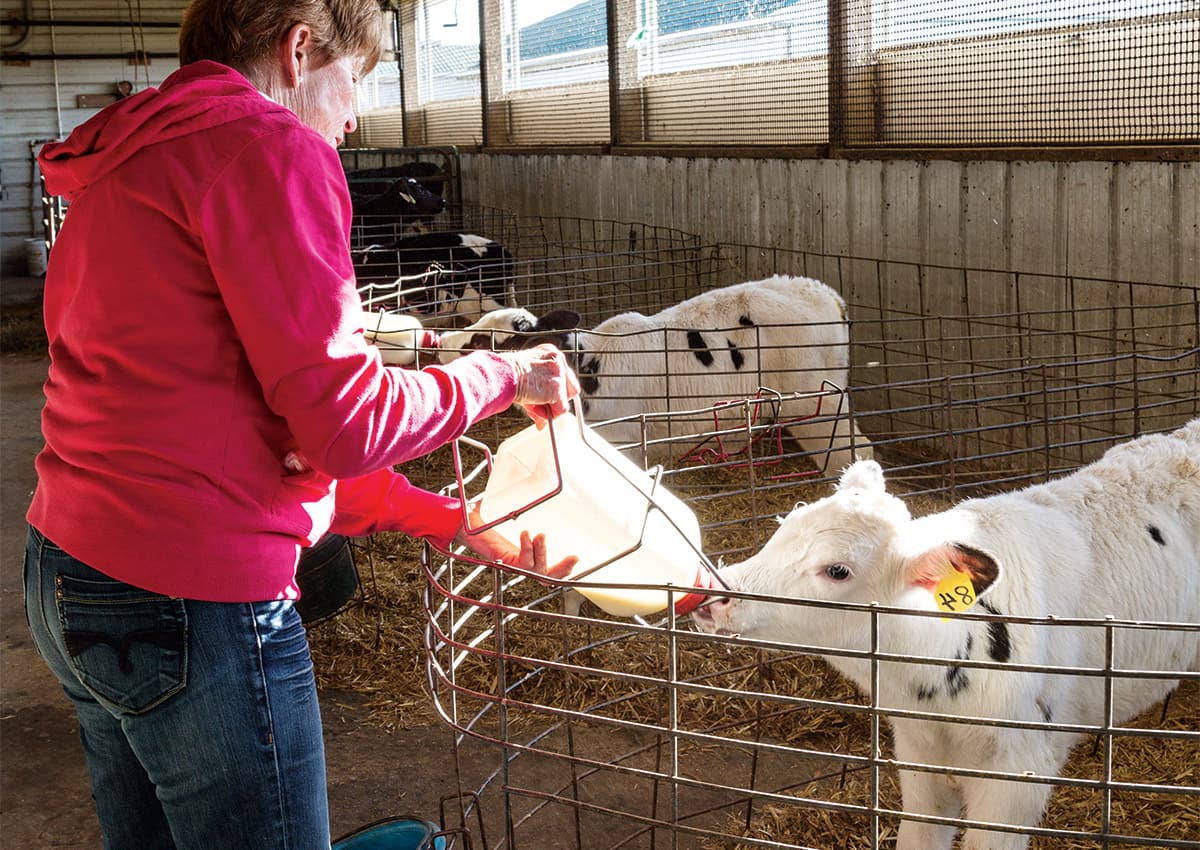 Whale is typical of the modern dairy farmer—the pride he takes in his work paired with the advantages of new technology make all the difference in both the top-notch milk his farm produces and the quality of life he enjoys with his family. It’s a combination that helps ensure high standards for Canadian dairy products.

Meeting those standards used to be pretty labour-intensive. “You cleaned all the stables by hand,” recalls Whale’s father, Bruce. “When I was really young, the milk was in milk cans that would be loaded onto a truck and taken to market.” Today, milk is piped directly from the cow through a filtration system, where it is immediately cooled to 4°C, to preserve quality and freshness, and housed in a stainless-steel tank. Between 7,000 and 8,000 litres of milk are picked up every two days and tested rigorously for any impurities before they’re accepted at the processing plant.

Despite the flexibility and efficiency that technology has brought to the business, Whale needs two full-time employees to keep up with the demands of farming. Every morning, for instance, one staffer mixes seven custom meals for the cows, depending on their health, age, milk production and lactation stage. Whale’s parents, Bruce and Deborah, help feed the calves. “We are raising generations of animals,” he says. “They become part of your family.”

Whale’s human family, meanwhile, soaks up farm life and provides a playful distraction from work. His elder daughter, Rya, 4, loves animals, especially cows, while Jack, 3, is mad for tractors. “It’s a neat education for them to be around animals, machines and life in general.” That education takes a break at lunchtime, when staff and the whole family—including Whale’s wife, Kelley, and one-year-old Reagan—enjoy their midday meal together. 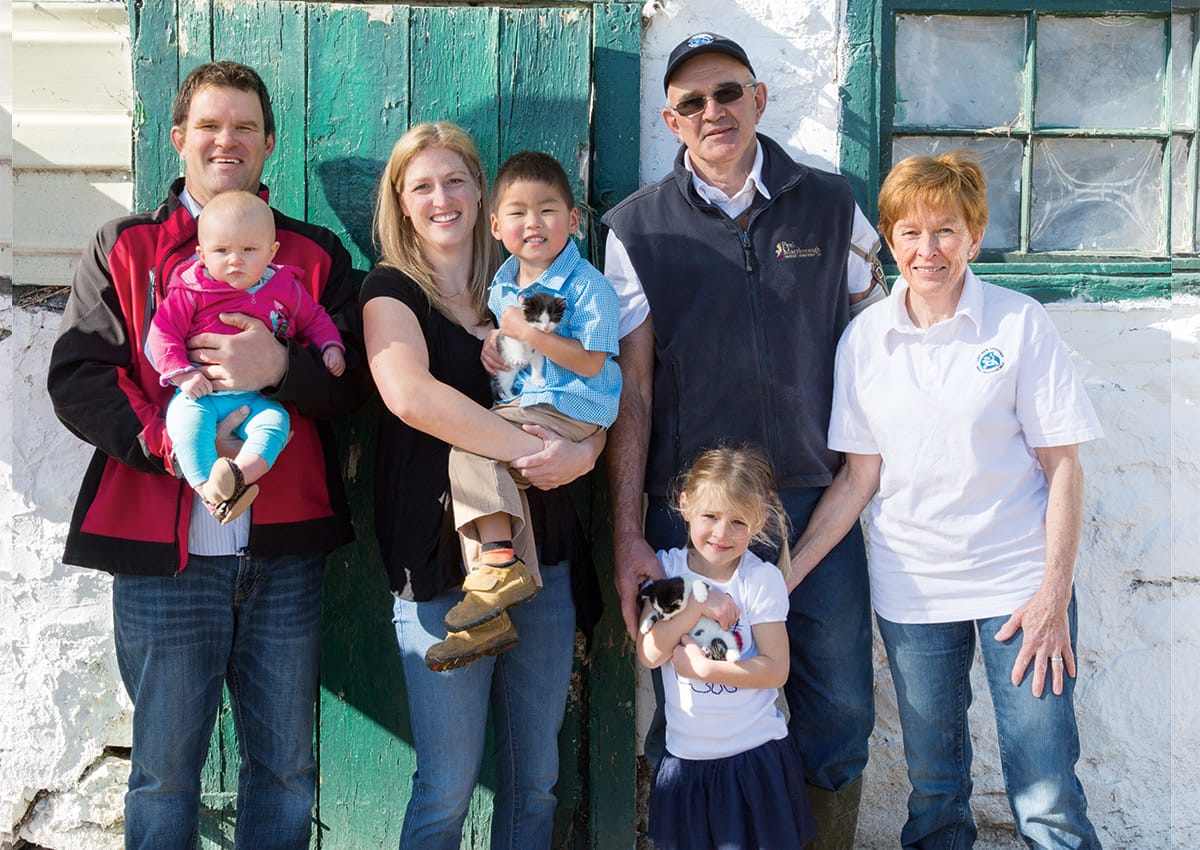 That responsibility carries on till 7 or 8 p.m., and even then, Whale can expect the occasional text from the barn computer to come check on a machine or a cow. “This isn’t just a business and a lifestyle,” says Whale. “We take care of these animals and we care about them.”

Nutritious and free from added hormones
• Here in Canada, our milk does not contain artificial growth hormones.
• Cows on the Whale farm are fed a diet of mainly homegrown alfalfa, corn and grass with an omega-3 supplement, which fortifies the milk they produce.

Milking themselves
• Cows walk into the robotic milking stall and are identified by their tracking necklace, which lets the computer know when they were last milked.
They’re given a treat while the robotic arm disinfects their teats, then attaches and holds the milkers until they’re finished. After a few minutes, the cows get another rinse and are free to go. 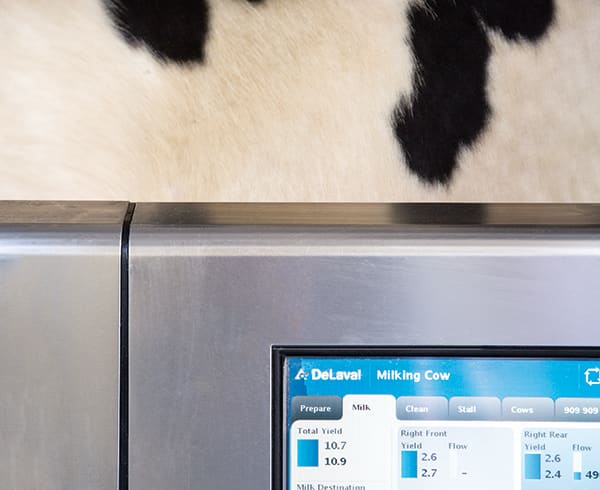 The high-tech milking machines record the details of each cow’s milk production and health.

Happy cows
• Cows are in the barn year-round and have free range to walk, socialize, drink, sleep and milk as they please. They have back scratchers and fresh bedding—and pregnant cows have water beds.

Wearable technology
• Whale’s cows wear tracking devices that measure how much exercise they get, when they’re milked and how much milk they’re producing.

Explore more of Canada's homegrown bounty in our Tastes of Canada series.