"Slice against the grain" is a common instruction in recipes, but what does it really mean and why is it so important?

All cuts of meat have lines or "grain" to them, some more distinct than others. Meat has a grain because it is a muscle. Muscles are made up of long fibre bundles running parallel to each other. Slicing against the grain means that the knife is cutting through these muscle fibres, making them shorter and easier to chew and therefore more tender. 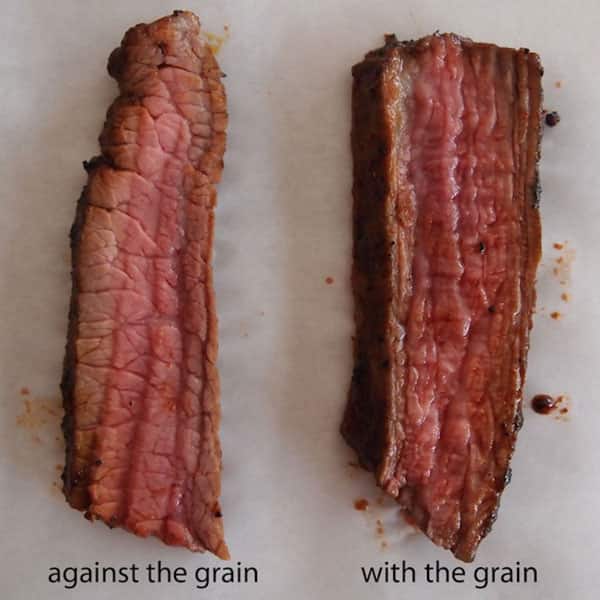 See the two pieces of flank steak above? The one on the right was cut with the grain (the knife was parallel to the muscle fibres). Can you see the grain? If you bite into this, your teeth would have the tough task of cutting up those muscle fibres.

The steak on the left however was cut against the grain (knife perpendicular to the muscle fibres). You can see the ends of the grain, there are no long stringy fibres, and the fibres are only as long as the slice.

So, how do you cut against the grain? The yellow arrows in the picture below indicate the direction of the grain in this flank steak. 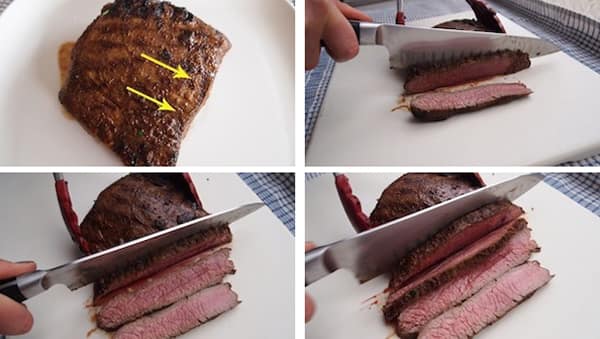 To slice against the grain, just position your knife  perpendicular to the grain and slice as thinly as possible. Slicing meat this way makes tougher (but usually cheaper) cuts of meat easier to chew and taste more tender.

More tender cuts of meat also have a grain, but because this grain is finer, it doesn't really matter which why you cut it (think of filet mignon).

How to slice meat against the grain, and why you should