We all know the old adage: necessity is the mother of invention.

I'm going to be so bold as to suggest that nowhere is this adage more true than in the evolution of a culture's cuisine. Everywhere in the world people were confronted by either an abundance of certain ingredients, a shortage, a season, or complete absence of something else. This would render certain dishes more highly prized than others. If something was rare or had a short season of availability, it became a delicacy. Likewise, something that was readily available all year long became a staple. And then there were the seasons.

In northern countries with shorter growing seasons, preserving the summer's bounty became paramount, and a matter of survival. So, we see drying, curing and smoking figuring prominently in cultures with very definite seasons and without means of refrigeration.

In other parts of the world, Asia and Japan, we see fermentation -- kim chi, black bean paste, miso -- as the preservation method of choice.

Now here's another old adage: waste not, want not. Not letting anything go to waste -- from animal bones to stale bread -- was another key strategy in a people's survival, and therefore woven into the cuisine. Beyond croutons and crumbs, many cultures have a revered dish made from stale bread, from soup to salad to pudding. Yesterday's baguette or pita isn't just for the birds! 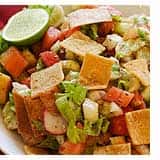 Stale bread delicacies around the world
Middle Eastern countries and the Mediterranean have fattoush (image, left). This is a salad made from day old pita bread. Cut into bite-size pieces, the pita is then either baked or fried in olive oil to a crispy golden brown. What the cook tosses with the pita varies by region and availability of produce: tomato, cucumber, lettuce, onion, mint, all in a simple vinaigrette of lemon, olive oil and sumac.

The Tuscans also have a bread salad: panzanella. A simple summer assemblage of fresh tomatoes, basil, olive oil, vinegar, salt and pepper, it comes in two versions: soft or crunchy. Some recipes call for baked cubes of stale bread, essentially croutons, while others call for bread that has been soaked in water and squeezed-out. Either way, this rustic dish is summer in a bowl. The Italians seem to have a greater appreciation for day-old bread, and instead of using the term stale, which implies, not good anymore, they have another term: pane raffermo. It simply means bread that has become more firm. Try our Tuscan Bean and Escarole Soup with Parmesan Croutons recipe to use up your pane raffermo. 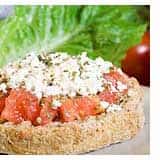 In nearby Greece, dakos (image, left) is a dish that is somewhere between bruschetta and bread salad. Slices of stale country loaf are brushed with olive oil and grilled. Feta cheese, kalamata olives, tomato, cucumber, onion, basil, and dill are tossed in a vinaigrette of lemon juice, olive oil, salt, pepper. This mixture is then poured over the grilled bread.

In Ethiopia, the people eat all of their meals with a bread known as injera. It's large, soft, circular, made with a high protein grain called teff and a sourdough starter. For their bread salad, tim tim fit fit, day-old injera is torn into small bits, and mixed with chopped tomato, onion, chilli pepper, and dressed simply with lemon juice, oil, and salt. This is an incredibly refreshing salad, with the soft, absorbent injera soaking up a ton a flavour.

In India, papri chat is a popular street food, and India's answer to bread salad. It's made from shards of yesterday's deep-fried dough, layered with chickpeas, onion, chili pepper, yogurt, tamarind sauce, and finished with a dusting of black salt. 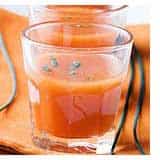 Day-old breads in sumptuous soups
Old bread—crumbs or soaked pieces—has also traditionally been used as a thickening agent in soups. In Spain, crust-less white bread, soaked in olive oil and lemon juice is added to cold gazpacho (image, left) for two reasons: to thicken, and to mute the sharp edges of all those raw, acidic ingredients. Try this trick in our simple Spanish Gazpacho recipe.

And the French and Italians have bread soups, often very simple preparations of broth, garlic, butter or olive oil, and bread, simmered and blended. Cream may or may not be added at the end, depending on the social class of the household. Pappa al pomodoro is a Tuscan bread soup with tomato. The French have an elegant version of bread soup that is confusingly called panade, which also refers to a savoury bread pudding. But really it's a generic term referring to a paste made from bread crumbs and liquid. In this case, panade is a rich, creamy, velouté, with nothing rustic about it.

Speaking of bread pudding, this is one of the sweetest ways to use up stale bread! Often thought of as a strictly British dessert, the Spanish have one of their own called pudin de pan. Basically a mixture of soaked bread, eggs, spices, sugar or syrup, and fat of some sort, often served with a sweet, boozy or creamy sauce. Bread and butter pudding, on the other hand, is a British recipe, that more closely resembles a baked French toast, with the addition of milk or cream to the eggs, thus making a custard. Our Custardy Bread-and-Butter Pudding recipe is a fine example.

And in case you're not already hopelessly confused, French toast isn't French at all. It's actually an American invention, though perhaps the French, who call it pain perdu, or "lost bread", would argue that point. Come to your own conclusion with our decadent  Cherry Cheesecake French Toast recipe made with French Bread.

Whatever! Any way you slice it, bread truly is the staff of life.

Pain perdu: How the world uses up a loaf of day-old bread