Share
Share
Want to know what I'm craving right now? A sinfully delicious hot chocolate with whipped cream and chocolate curls on top. And because I'm a health editor I figured I should probably know what I'm getting myself into. I just looked up the calories in my favourite cup and it has 210 calories and 7 grams of fat. That's actually not as bad as I thought (some macchiatos can be upwards of 350 calories) and I assumed it was basically the calories of a Big Mac (which has 540 calories I might add). 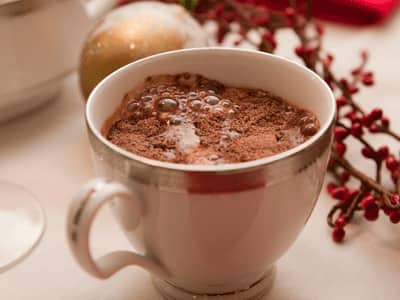 But that's not including the whipped cream. And  itt also has 27 grams of sugar. Egads! And my favourite chai tea latte has 240 calories! I need to stop reading nutrition facts before I squelch all future drink enjoyment. So what am I going to do now that I've found out that my sweet treats are calorie bombs? I'm not one for deprivation.

I say, splurge once in a while but if you're craving it on the regular I've got some other ideas to make your naughty drinks nice:

A London Fog — While one with syrup and flavourings might have just as many calories as a hot chocolate I suggest you ask for just some warmed up skim milk or almond milk and an Early Grey tea bag. Then put some natural vanilla extract in it or cinnamon on top. You'll get protein from the milk and you'll leave feeling a little more satisfied and a little less guilty.

Try a flavoured tea — David's Tea has some awesome ones (gingerbread or coffee cake anyone?) and tea has lots of added benefits. You can also sweeten them up with a wee bit of honey which is perfect for fighting sore throats this winter.

Swap the sugar — Ask for half sweet drink or try skim milk if you must have your seasonal favourites. That makes them just a little bit healthier and you can add some extra flavouring with things like cinnamon to amp up the flavour. What are your favourite healthy holiday drinks?