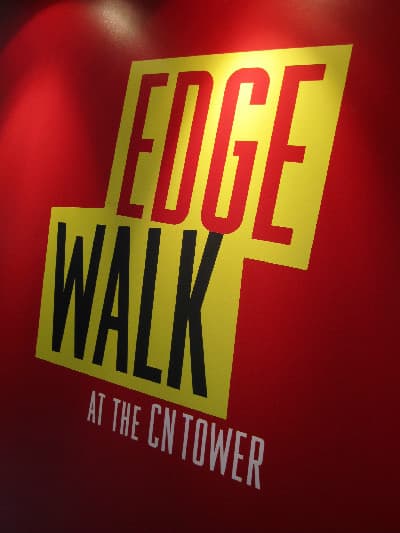 Out of the entire team here at Canadian Living, I’d probably rank dead last in the “daredevil” stakes. As somebody whose idea of a big risk is whether or not to get the hairdresser to give me “steps” a la J.P. Arencibia, I’d definitely be the last one to take up the new EdgeWalk challenge at the CN Tower.

Which is why I absolutely HAD to do it.

Exactly seven months ago today, I kicked a six-year, half-pack-a-day smoking habit cold turkey - easily one of the most liberating experiences of my life. I didn’t realize until I actually stopped smoking exactly how much it was holding me back, whether it was having to bundle up before venturing out for a puff in the middle of a February blizzard, to being self-conscious about that nasty stale smell of cigarette smoke. By butting out for good, I actually felt free for the first time in ages, and felt ready to tackle just about anything.

We’re talking a debilitating fear of heights, here. As in, unable-to-go-beyond-the-third-rung-of-a-stepladder without a massive attack of the shakes.

From the vantage point afforded by my regular nosebleed seats at Blue Jays games earlier this season, I’d followed the two-month construction of EdgeWalk with grim fascination. Looming over the Rogers Centre, the new 1.5 metre-wide metal grille walkway circling the CN Tower directly above the 360 restaurant makes the Tower’s acclaimed Glass Floor seem like a cakewalk in comparison. I mean, it's JUST a grille - there's no handrail, and certainly not any 2.5-inch thick glass floor... Just two relatively thin cables linking you to an overhead track, and the aforementioned galvanized steel grille, through which you can watch the cityscape unfold nearly a third of a kilometre beneath your feet. It's enough to give you an unwanted second taste of the 360’s (admittedly rather lovely) prix fixe menu.

But, remembering how liberated I'd felt after cutting out the cancer sticks, I knew deep down that the best way to fight this fear of heights was to confront it head-on. With palms sweating, I clicked the "Send" button and fired off my RSVP for the EdgeWalk media preview.

There was no backing down now. 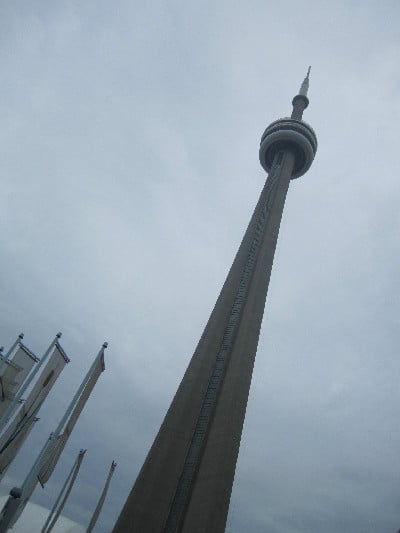 Friday - my date with destiny - came around suspiciously quickly (proof, if any be needed, that time doesn't just fly when you're having fun). I showed up to the EdgeWalk Basecamp at the CN Tower Visitors' Centre as scheduled, expecting to meet a team of trembling journalists representing newspapers, magazines, websites and TV programs from around the world. Ever since RSVP'ing, I'd taken great comfort imagining there'd be someone else in the media scrum who'd be in far worse shape than me. You know, the type of person who'd collapse in a weeping heap as the elevator soared skyward (or something equally dramatic and as reassuringly cowardly).

That wasn't to be. In a cruel twist of fate, the others had either backed out or rescheduled at the last minute, and it was just going to be me taking that elevator ride. On my own.

If anyone was collapsing in a weeping heap, it was going to be me. 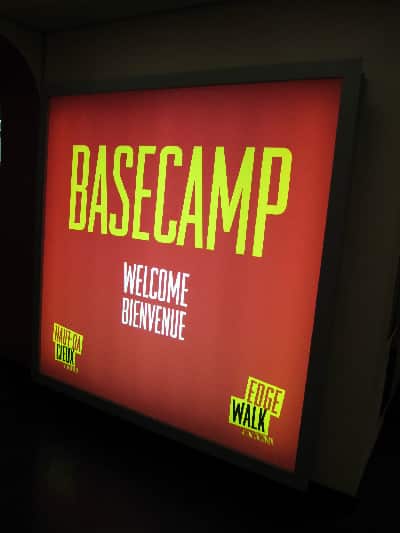 [/caption] The first thing you'll see at Basecamp is an impressive live weather display that constantly tracks environmental conditions. With the Tower serving as Toronto's unofficial lightning rod, it's obvious that electrical storms are a real concern, as are high winds - although it's not necessarily the risk that you'll be swept off of the platform that they're worried about. Instead, it's a matter of ensuring you're always able to hear your guide clearly, which can be a bit of a challenge when winds howl at a speed in excess of 55 mph. [caption id="attachment_1837" align="aligncenter" width="400" caption="No lightning? CHECK. Winds under 55 mph? CHECK. Apparently, we're good to go."] 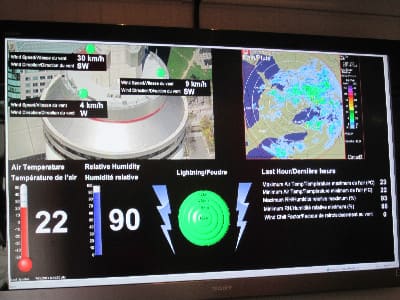 [/caption] First stop in Basecamp: The jumpsuit fitting. (Although "fitting" is a bit of a misnomer, as you're about to see from my floodpants.) This sporty zippered number slips directly overtop of your clothes, and there's even a fetching cap should you feel so inclined. I'm told the cap is a popular (and sun-smart) option for the folically-challenged. And you can file this under "Random But True": The temperature on EdgeWalk can be as much as 10-degrees colder than on the ground below, so chances are, even on the hottest day, you’ll be thankful for the jumpsuit. [caption id="attachment_1832" align="aligncenter" width="400" caption="High adrenaline calls for high fashion."] 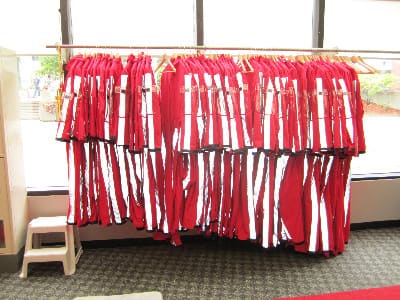 [/caption] Just in case you were silly enough to wear stilettos, soft-soled shoes are provided. (Much nicer than the shoes at the bowling alley, I might add.) [caption id="attachment_1833" align="aligncenter" width="400" caption="OMG shoes!"] 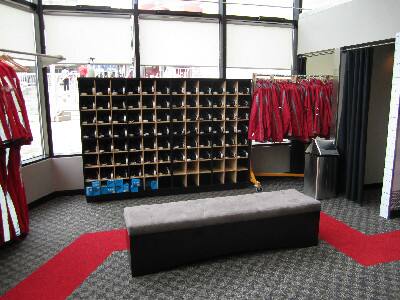 ...And finally, the all-important harness. 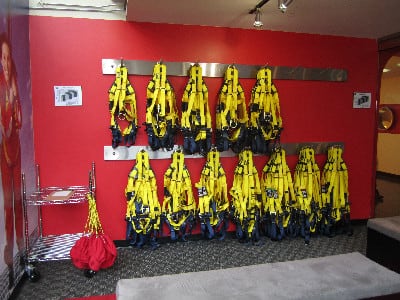 [/caption] You know, it's funny the difference the proper gear can make. Even though this outfit isn't exactly a spandex unitard, it suddenly transformed me into a superhero. Feeling snug and safely strapped in with the final reassuring click of the harness buckles, it's like I became Spider-Man. I suddenly realized this wasn't just something I could do, but something I could actually  have fun doing. [caption id="attachment_1836" align="aligncenter" width="400" caption="Ta-daaaa!"] 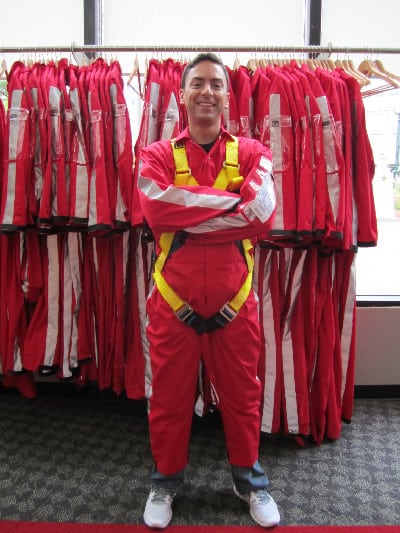 [/caption] Once you've donned the three-part uniform, and been given a full inspection by three different staffers - one of whom will serve as your guide once you're "on the outside" - you're ready for that iconic, ear-popping elevator ride to EdgeWalk itself, a full 356 metres (that's 1,168 feet) above Toronto. *insert big sigh here* Before I go any further, I've got to give big props to my amazing guide, Brian. He trained for this gig at EdgeWalk's sister site,  SkyWalk, in Auckland, New Zealand, and gave me the gentle nudges I needed when my Spidey Senses stopped tingling. Never pushy, Brian let me venture out onto that metal grille at my own pace, and merely showed me what I could achieve once I felt comfortable. Which ultimately included this... [caption id="attachment_1850" align="aligncenter" width="400" caption=""Hi Mom!" "] 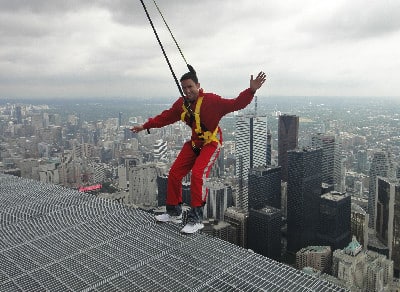 [/caption] Umm... I know, right? YIKES. Granted, that was taken 15 minutes into the 30-minute EdgeWalk, but it's a testament to how (relatively) safe I felt at that point, and how unexpectedly serene and breathtaking - and incredibly cathartic - the entire EdgeWalk experience can be. After those admittedly horrifying first few steps onto the grille, I simply stood still for a few moments and soaked up the barrier-free view of Toronto's harbourfront. It's absolutely stunning from this altitude, and the initial terror quickly gives way to a sense of wonder and awe. It's so easy to take your home for granted, but the unobstructed view from here gives you a fresh perspective on the real beauty of your surroundings; these buildings and places you see - without actually seeing - every day. From the fairytale romance of the Royal York to the engineering marvel of the Rogers Centre, I felt a real sense of pride in my city that helped calm those pesky frayed nerves. [caption id="attachment_1851" align="aligncenter" width="400" caption="Alas, no Jays game today... The Rogers Centre roof was closed anyhow."] 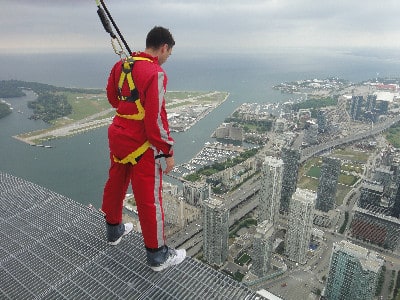 [/caption] The single scariest thing about EdgeWalk? The wind. Even though it was just registering 30 mph on the scanner at Basecamp, the wind hits you with like a ton of bricks as soon as you're on the west-facing side of the needle and makes each step feel like you're walking through molasses. It also creates a rather unsettling screech when it passes through the twin tracks that hold your two safety cables; an eerie sound that registers somewhere between a steam whistle and nails on a chalkboard, and for some reason, was as scary to me as actually looking down. [caption id="attachment_1852" align="aligncenter" width="400" caption="Everyone's allowed one "I'm the king of the world!" moment."] 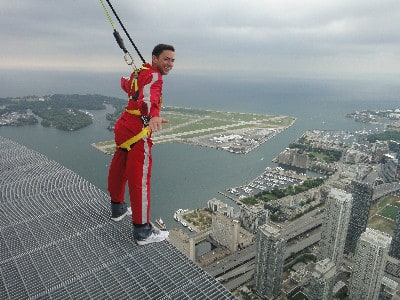 At the risk of sounding sappy, I can't tell you how proud I am of what I'd accomplished on EdgeWalk. Although I'd still never call myself an adrenaline junkie, I'd managed to reign in my fear of heights to the point where I could actually enjoy this experience, and can't recommend it highly enough. In fact, I might just see you there - I'm already planning a second attempt later this summer...

Will you be taking the EdgeWalk challenge?

Here's what you'll need to know:

* EdgeWalk operates seasonally from May to October (except during electrical storms and winds in excess of 55 mph).

* The duration of the walk is 20-30 minutes (not including briefing).

* Tickets are $175 per person, which includes complimentary keepsake video, photos and certificate of achievement, as well as "Total Tower" access to the CN Tower Look Out, Glass Floor and Sky Pod levels.

Living on the EdgeWalk