The magic number
You already know skimping on sleep is bad for you, but were you aware sleeping too much is no good, either? According to Harvard University's Nurses Health Study, women who slept too little (five hours or less) or too much (nine hours or more) scored lower on brain and memory tests and, by researchers' estimates, were mentally two years older than those who slept for seven to eight hours a night.

If you have a serious sweet tooth that's always getting you into (dietary) trouble, try to follow this very simple healthy-eating rule: Save the calories for the really good stuff. It's worth indulging in a favourite dessert or a special treat, but if you're feeling tempted to snack on something just because it's there, skip it.

Water world
To replenish your sodium levels after an intense workout—think hot yoga or a long run—add a pinch of salt to a glass of water.

Tools of the trade
Three must-have items for your healthiest year yet. 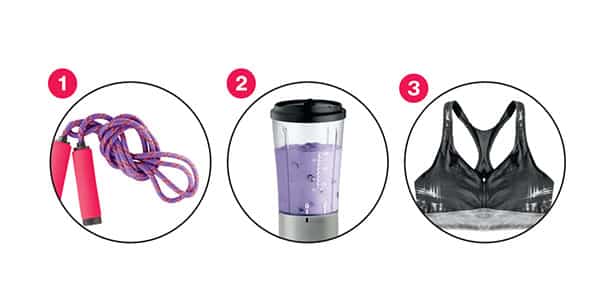 1. Skipping rope Even a short skipping session can deliver major cardio benefits. Plus, a jump rope is inexpensive, easy to use and—dare we say it—kinda fun.

2. Mini blender Prep a smoothie the night before, give it a quick whirl in the morning and dash out the door, healthy breakfast in hand. Single-serve blender, $27, hamiltonbeach.ca.

3. Sports bra No one wants to exercise without the right support. A good sports bra will feel snugger than your regular bra, but it shouldn't cause chafing. If you're big-busted, look for one that comes in actual bra sizes.

Running start
The hardest part of exercising is getting started. So when you don't want to head to the gym, make a 10-minute commitment to being active. If you want to stop after your time is up, that's fine—at least you'll have done something. But it's more likely you'll end up finishing your workout! — Kathleen Trotter, personal trainer

Breathe easy
Research shows deep breathing reduces your heart rate and blood pressure, relieves stress and can even boost productivity. But those studies say we're all really bad at breathing properly. To do it right, try a free app like Breathing Zone (iOS) or Paced Breathing (Android). Or go the wearable route; new Fitbits and Apple Watches have built-in apps.

Why a 5K run is a totally respectable fitness goal

If you like working out, you’ve likely felt the temptation to keep trying new, cool—and increasingly extreme—fitness trends. But this year, we’re calling it: marathons and Crossfit aren’t the only way to work out. Here’s why we’re embracing more moderate workouts, like the 5K run, instead.

How to trick yourself into exercising, and other good advice