Mental illness is both extremely common and extremely underfunded. In an excerpt from his new book, How Can I Help?, Dr. David Goldbloom makes a case for giving mental health the attention it deserves.


Recently, I experienced my fourth lifetime episode of clinical depression (for me, characterized by extreme guilt, feelings of worthlessness, weight loss, hopelessness and suicidal ideation). While my workplace was incredibly supportive when I needed to take leave, a wide range of opinions came at me from the many people in my life—everything from “this is a serious medical issue that requires your full attention” to “just keep yourself busy so you can’t think sad thoughts.” Overall, I felt love and concern, but was struck once again by the lack of resources readily available for my use—no hospital beds, 20-minute wait times on crisis lines and months-long waitlists to see a psychiatrist.

When the new book, How Can I Help? A Week in My Life as a Psychiatrist, came across my desk when I was feeling my worst, I knew it was a sign that I had to read it. Within the pages, psychiatrist Dr. David Goldbloom (with the help of co-author Dr. Pier Bryden) delves into his role as the senior medical advisor at the Centre for Addiction and Mental Health (CAMH). He explores a week in his life, including patient interviews, ER shifts and presentations.

The below excerpt moved me, because it explains the challenges that those with mental illness still face and why it’s so important for the mental-health system to become a priority for us all. –Andrea Karr 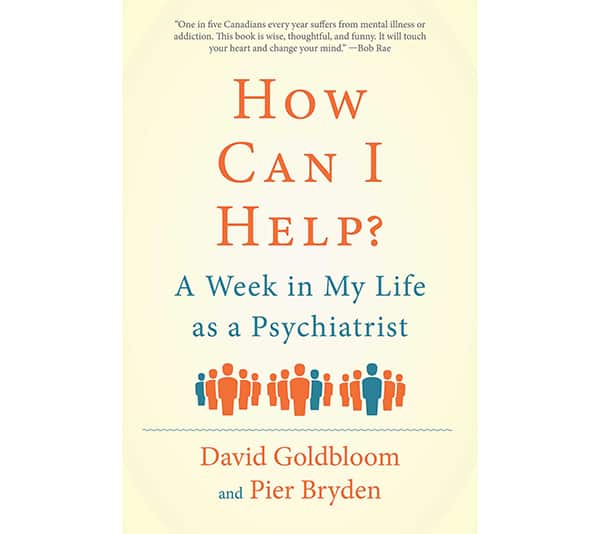 I run from the parking lot to the anonymous ballroom, arriving ten minutes before my scheduled presentation. My last task of the day is a talk to a union group of telecommunications workers who are holding their annual national meeting at a midtown hotel. After the moderator of the session introduces me, I step up to the podium.

I ask the audience to do a shout-out exercise with me. The only prop I have requested is a flip chart. I tell them to park their political correctness at the door and shout out adjectives that describe someone who is mentally ill.

It starts slowly, with one person saying “nuts.” I write it on the chart, then goad them, challenging them to say something I haven’t heard before. The wave of adjectives swells: “Whack job… psycho… loony tunes… dangerous… weird… scary… out to lunch… an enchilada short of a combo plate.”

In less than a minute, writing as fast as I can, twenty adjectives fill the page. I flip it over and ask them now to think of someone they know personally who has had cancer and shout out the adjectives that would describe that person. This time there is no delay: “brave… scared… sick… courageous… inspiring… alone.”

The final thing I ask them to do is raise their hand if in the course of their lives they have known anyone who died by suicide. There are two hundred people in the room. All but a few raise a hand.

I tell them that this is why they are having this talk, because mental illness affects every Canadian family and every workplace. And I point out what they have already realized—that every one of the adjectives they use to describe a person with cancer is relevant to a person facing mental illness, and yet there is no shortage of words to denigrate, lampoon and ultimately distance the latter. I tell them that the plethora of pejorative terms reflects the greatest disability that patients with mental illness face: stigma.

The mood in the room is more somber now, and I wonder if people are thinking about their friends and relatives who have mental illness.

“One in five. That’s the number of Canadians each year who will experience some form of mental illness. Unlike the diseases that people jog along highways and climb skyscrapers to raise money for, which are usually diseases of middle age and old age, mental illnesses typically hit people in mid- to late adolescence and young adulthood, just as they are coming into their own identities personally and professionally. The 3,600 Canadians who die tragically by suicide each year, most commonly in the grip of mental illness, represent a small percentage of Canadians who live with these disorders year in, year out. In Ontario, where a third of the entire Canadian population lives, the most comprehensive study of illness burden—which is defined and measured as the combination of lives lost prematurely and lives lived with diminished function—has shown that mental illnesses and addictions represent one and a half times the burden of all cancers combined. But if you look at the resources available, the public and private support provided, there are nowhere near one and a half times the resources for mental illness compared to cancer.

“There’s more. In terms of the Canadian workplace, where estimates are that each day there are 500,000 people off from work due to mental illness, we know that mental illnesses are the leading cause of disability requiring a leave of absence in the private and public sectors. Forget the incalculable human cost to individuals and their families; there is also a measurable cost for organizations and for countries. It’s said that mental illnesses cost the Canadian economy $51 billion a year in lost productivity as well as health-care costs.”

I ask the audience what their organization’s response is when a colleague is struck by a bus and hospitalized on an orthopedic unit of the local hospital. They describe delegations of visitors, flowers, cards and gifts. Then when she is at home recovering, they send over casseroles, and later, when she is up to it, work that she can do from home. When she is ready to return to work, albeit in a wheelchair with her legs in casts, they raise her desk and build a ramp.

“And what if she had thrown herself under the bus, escaped physical injury, but was admitted to the psychiatric ward of the local hospital?”

Read more:
Should I tell my boss about my mental illness?