Share
It's time to break out your spade and get your hands dirty in the name of nutrition. While nourishing plants such as kale and arugula can be purchased from grocery stores and farmers' markets, growing them yourself in your backyard or a community garden guarantees unsurpassed freshness and nutrient levels. And so that you have plenty to work with in the kitchen, gardening guru Frankie Flowers, author of Food to Grow, weighs in with his growing tips.

Amaranth
The hearty yet tender greens of amaranth are easy to grow and highly nutritious. On top of supplying a bounty of bone-building vitamin K, amaranth contains vitamin C, manganese, antioxidants and beta-carotene. "Not only can we convert beta-carotene into vitamin A, but it's also an antioxidant that protects our cells from the damaging effects of free radicals," says Bryce Wylde, alternative health clinician and coauthor (with Frankie Flowers) of Power Plants: Simple Home Remedies You Can Grow. "And less cell damage means less risk for diseases like cancer." Another reason to plant amaranth: An extra 1 1/2 servings daily of leafy greens may lower your risk for Type 2 diabetes by 14 percent. Plus, amaranth's purple-streaked leaves will add a fetching touch to your garden. 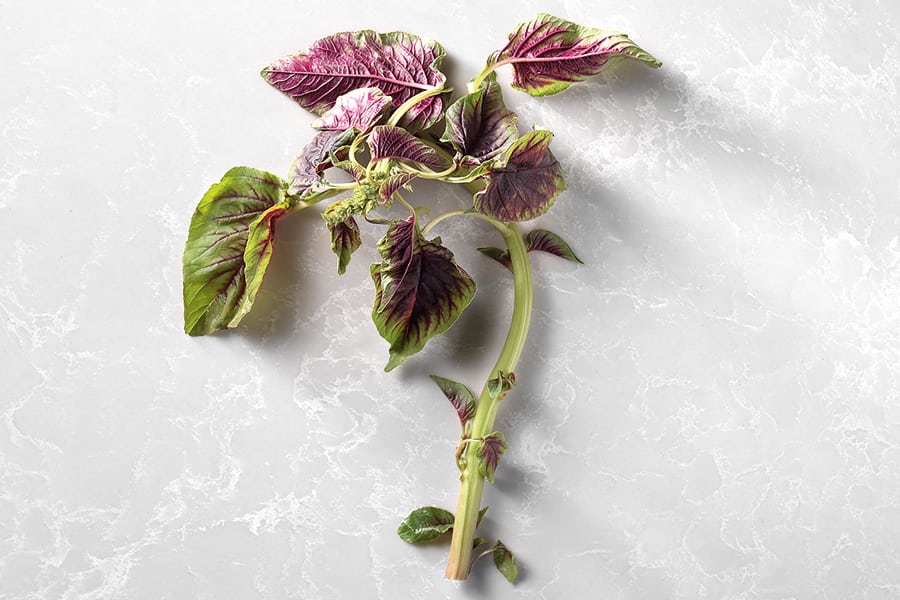 In the garden: Plant it from seed in a sunny location, but not until late spring, when soil temperatures are warmer; unlike arugula and sorrel, amaranth can thrive in the heat. It can also flourish in poorer soil conditions, says Flowers, without the need for fertilizers.

In the kitchen: Slightly astringent when eaten raw, the greens mellow as they cook. Younger amaranth leaves tend to be more subdued in flavour. Use it interchangeably with items like spinach in salads, sautés, stir-fries, soups and smoothies.

Kale
A mere cup of this ultra-nutritious green has more than a day's worth of vitamins A, C and K. "We need vitamin K in our diets for proper blood clotting and, in turn, wound healing," says registered dietitian Tristaca Curley, owner of Fueling With Food in Kelowna, B.C. This nutrient is linked with lower risk of death from diseases such as cancer and heart disease, and Curley notes that this veggie also has an arsenal of disease-fighting antioxidants like lutein. Try planting such kale varieties as dinosaur (Tuscan or Lacinato), Russian Red and deep-purple Redbor. 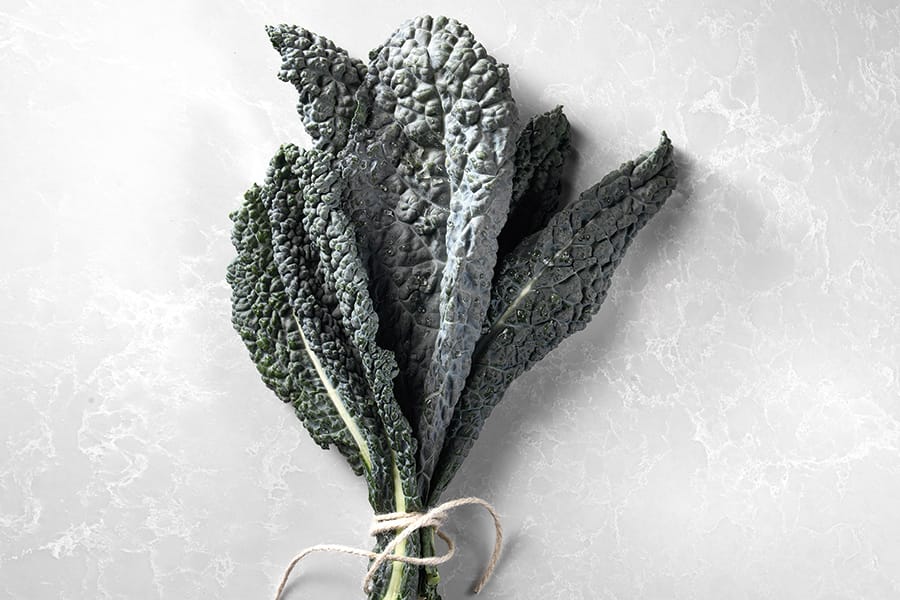 In the garden: Start with pregrown seedlings, recommends Flowers, then plant in full sun in early spring in well-drained soil, rich in organic matter like compost. Kale is a cool-season crop, so you can plant it again in late summer. Pick greens as needed—the plant yields lots of leaves.

In the kitchen: Toss kale into salads, soups, egg dishes like frittatas, pastas and stir-fries. It's a wonderful addition to smoothies, too. Tame kale's bitterness by heating the leaves or massaging them with a dressing. Don't forget to tear the leaves from the bitter stems before use. Pluck younger leaves, which are more mellow, from the garden.

Microgreens
These tiny versions of greens such as kale, arugula and radishes can be grown indoors. And while they might be small, they pack a flavourful and nutritional punch. Studies show that microgreens can be denser in essential nutrients such as vitamins C and E, as well as disease-thwarting antioxidants like carotenoids, than their grown-up counterparts. How? "Microgreens are harvested shortly after germination, when they're still full of the nutrients they need to grow," says Wylde. "In some cases, they can be four to six times the concentration in nutrients by weight." And since microgreens are ready for harvesting in little more than a week, they provide a much quicker payoff than other garden plants. 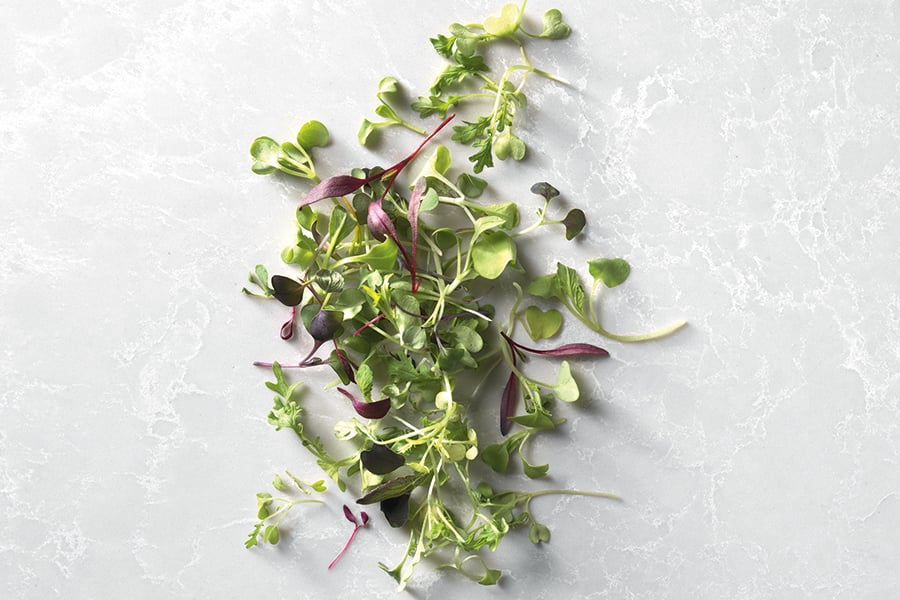 In the garden: If you're farming indoors, fill containers that allow for some drainage (try the plastic clamshells that strawberries are packaged in) about three-quarters full with potting soil, then generously scatter sprouting seeds on top, says Flowers. Finish with a thin layer of additional soil. Water once daily, just to the point where the soil is moist like a damp sponge, not soaked. Supply enough light to support growth.

In the kitchen: Beyond adding them to salads and sandwiches, blend microgreens into  pestos and other sauces or roll them into spring rolls and omelettes. These greens can be a fanciful and nutrition-packed garnish for puréed soups, crostini, grilled fish, pizza and pasta dishes. Their flavours range from nutty to assertively peppery, so play around with different varieties to see what you like.

Garlic chives
Think of these perennial stems as the garlicky, leek-y cousin of common chives. As a member of the allium family, which includes garlic and onions, garlic chives boast the same sulphur compounds shown to have robust antibacterial powers, says Wylde. There's also some evidence that allium vegetables like chives can halt the replication of cancerous cells and help lower blood pressure. 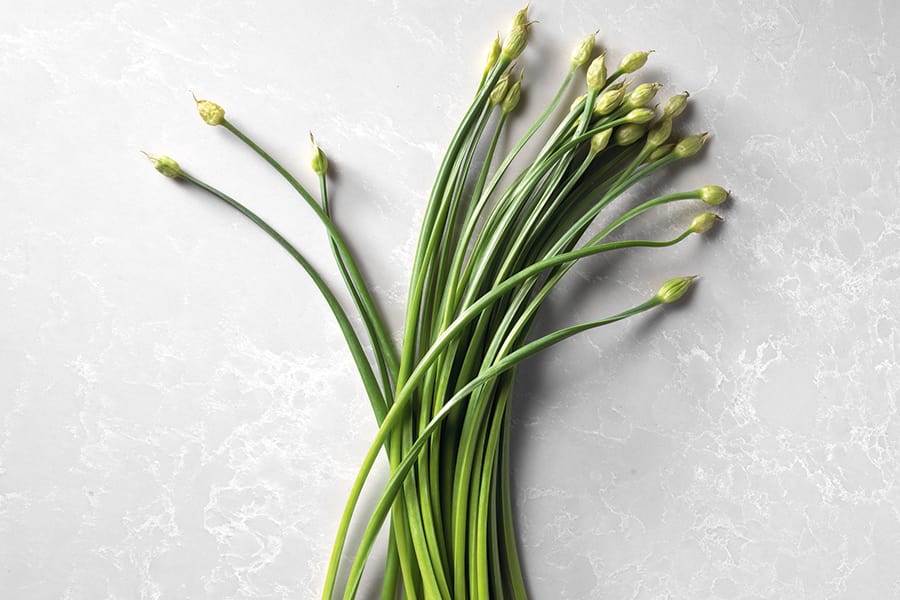 In the garden: Super easy to grow and insect-resistant, garlic chives thrive in full sun and well-drained soil. For better results, purchase and plant young seedlings, and water regularly until well rooted. You can grow garlic chives in containers, but there's less chance of overwintering success if you leave them in a pot, says Flowers. Try taking the pot indoors during the off-season, but put it near a south-facing window in a sunny place that isn't by a draft or a vent.

In the kitchen: Garlic chives can be used as a garnish as you would regular chives. Try sprinkling them over fish, scrambled eggs, stir-fries and puréed soups. Use garlic chives as a flavour enhancer in compound butters, dips, mashed potatoes, dressings and fritters. And it's not just the leaves you can enjoy—the white flowers are edible, too.

Sorrel
Resembling spinach, this rhubarb relative has a tart and refreshingly lemony taste. Because it doesn't travel or store well, it's not a common supermarket item, so turn to your garden. "Sorrel has an abundance of antioxidant vitamin C, which helps neutralize free radicals and oxidative stress," says Curley. "Research suggests eating more leafy greens like sorrel may reduce your blood pressure." Other studies indicate leafy greens like sorrel can lower your risk of heart disease. Sorrel's "lemonade in a leaf" flavour hails from its high amounts of oxalic acid. While this compound can hinder the absorption of certain minerals, like calcium, Curley says it's not likely you'll eat enough to have a significant impact. But if you have a history of kidney stones, you may want to ease up on your sorrel consumption. 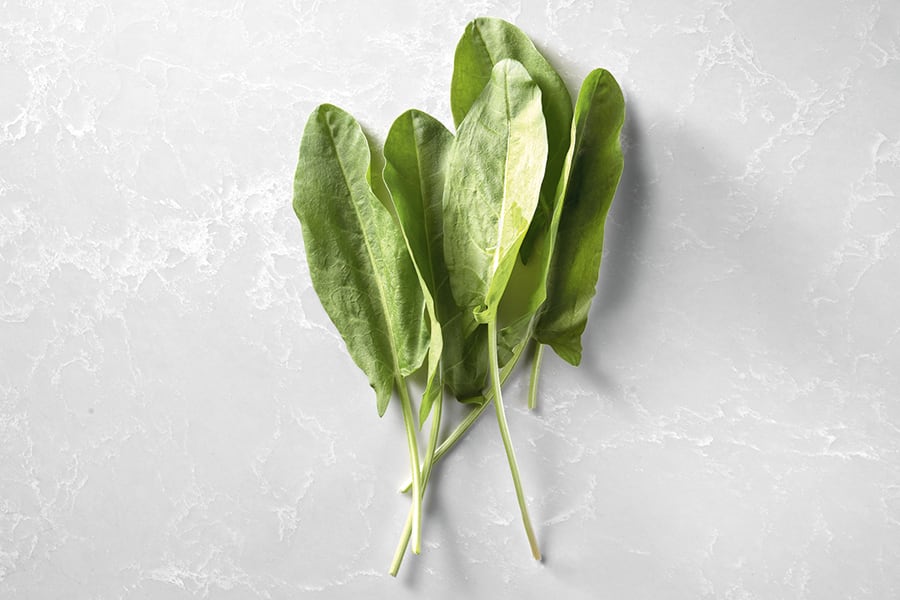 In the garden: Sorrel thrives in cool climates, so plant this perennial from seed in full sun in early spring, suggests Flowers. Placed in well-drained soil with good organic matter, it should come back year after year in plant hardiness zones 5 and warmer (southern B.C., Ontario, Quebec, parts of New Brunswick and Newfoundland).

In the kitchen: Fresh sorrel leaves will brighten a bowlful of other spring greens as well as grains, lentil or potato salads, pestos and sandwiches. Use it as a pizza garnish, too! French chefs will often chop it into sauces, especially cream-based ones, to act as a counterpoint to the richness of the sauce. You can also fold it into omelettes, quiches, pasta dishes and spring soups for a little zing. The leaves' puckery taste, however, mellows when cooked. Young, tender sorrel leaves are milder-tasting, whereas larger leaves have notable sour power. Particularly delicate, sorrel is best consumed within a day of harvesting.

Arugula
This green with a famed peppery zip packs plenty of vitamin K—essential for helping ward off fractures and osteoporosis, says Wylde. The plant's abundance of phyto­nutrients can aid in fending off certain cancers and other maladies. Because arugula helps quell inflammation, Curley adds, it's a great choice for those with chronic pain conditions such as arthritis and gout. 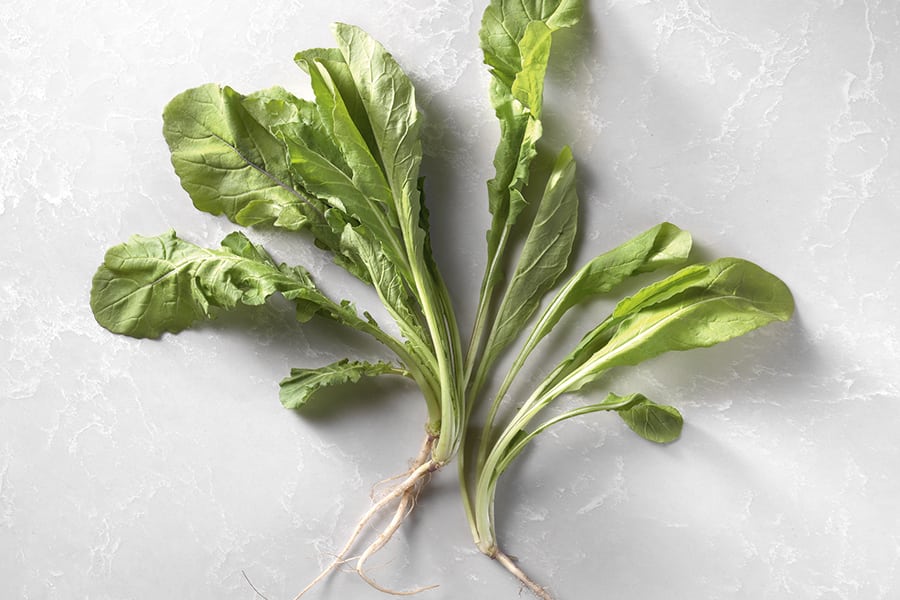 In the garden: The leaves perform best in the cooler days of spring or early summer, says Flowers. Sow seeds in a sunny spot in soil enriched with compost. Harvest outer leaves so the plant keeps giving for weeks to come. Water regularly; letting arugula dry out for extended periods encourages it to produce flowering stems (known as bolting). Yank out greens that bolt and start anew, or let them produce white flowers, which are delicious in salads.

In the kitchen: Besides a standout addition to a seasonal salad, arugula is great instead of basil in pesto, mixed into a pot of cooked beans or quinoa, sprinkled over seared salmon and stuffed into sandwiches. Its peppery bite can also kick grilled cheese, tacos, burgers and pasta or potato salad up a notch. 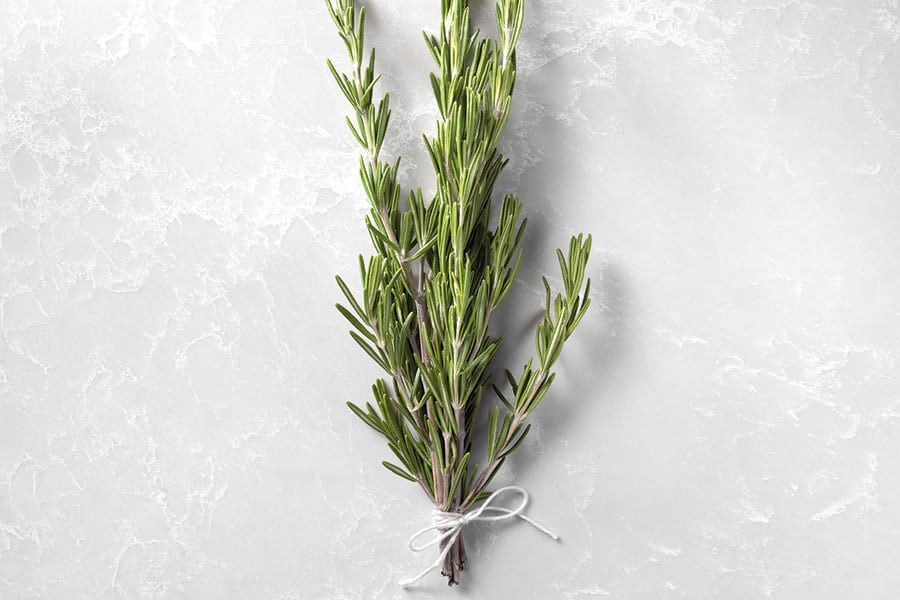 In the garden: Rosemary is best grown from transplanted seedlings or baby plants. Plant it in pots or a garden in full sun in well-drained soil and allow it to dry out between watering, says Flowers.

In the kitchen: The pine-needlelike leaves add flavour to vinaigrettes, summer cocktails, grilled fish, scrambled eggs, roasted new potatoes and savoury baked goods like cornbread. Mix minced rosemary with garlic, lemon juice and olive oil to use it as a marinade for meat and vegetables. Add it to your burger for your backyard cooking; Wylde notes that rosemary's antioxidants can slow down the generation of cancer-causing compounds that form when meat is cooked at high temperatures or charred on the grill.

Lemon balm
Working this perennial herb into your diet can help you keep calm. "Active ingredients in lemon balm like eugenol have a calming ability, which makes it useful for helping reduce stress and anxiety as well as improve sleep patterns," says Wylde. Plus, it has antibacterial activity and works to alleviate digestive woes such as gas and bloating. 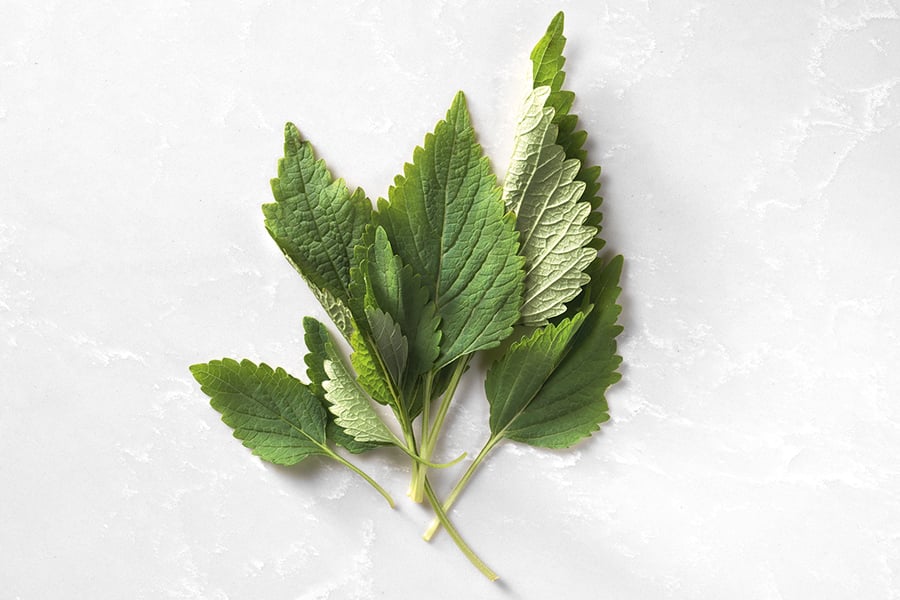 In the garden: Lemon balm thrives in most soil conditions and is drought-tolerant, says Flowers. Plant it in full sun and gently prune with your fingers any flowers as they form to prevent the balm from self-seeding and becoming a garden hog. It's an excellent candidate for container growing as well.

In the kitchen: Use it as you would mint in veggie and fruit salads, herb sauces like chimichurri, salad dressings, soups and even desserts. Wylde suggests steeping several leaves in hot water after dinner for a relaxing, stomach-soothing tea.

This story was originally part of "Back To Nature" in the May 2016 issue. Subscribe to Canadian Living today and never miss an issue!