Jenny paced her sister (left) to a personal best in the Ealing Eagles 10K four years ago. Image by: Kieren Geaney

Despite devastating cancer diagnoses in the prime of their lives, three brave women climbed their way back to health and are now making the most of their time as breast cancer survivors.

JENNY BAKER
How she used running—and writing—to maintain her sense of self after hearing "You have cancer." 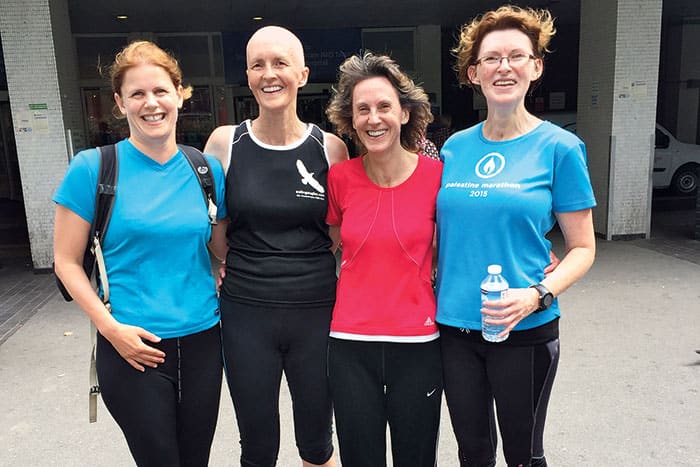 Jenny Baker post-run with friends and family at the hospital.

In the year before she was diagnosed with breast cancer, Jenny Baker ran hundreds of kilometres, always outdoing her personal bests. She'd been running for 15 years by that point, and it had become a major part of her identity. "Running keeps me positive," she says. "It's a good way to work through feelings and reflect."

Jenny had planned to complete five marathons in 2015 to celebrate her 50th birthday. Instead, she found a lump in her breast. "Though it was worrying," she says, "I never thought it would be breast cancer. I felt fit and healthy." But sure enough, the six-centimetre lump was cancerous and had spread to her lymph nodes. When her oncologist recommended chemotherapy to shrink the mass before surgery, one of Jenny's first questions was, "Can I keep running through chemo?"—something her doctor had never been asked before.

With her oncologist's blessing, Jenny proceeded to run to all six of her chemotherapy sessions with family and friends along for support. Her second session was particularly hard. "I found myself weighed down with sadness," she says. But she met a friend in the park, and they ran along the river and talked the whole way. By the time they arrived at her appointment, she felt lighter.

Jenny also used writing to work through her cancer journey by blogging about her experience once or twice a week. Those posts—about everything from her chemo runs to bra shopping—became fodder for her book. Each week, she receives messages from women who have been touched by her story.

Though Jenny eventually had to take a break from running after her mastectomy and reconstructive surgery, she was back at it after a nine-week hiatus and continues to participate in marathons and triathlons. "When you have cancer, your sense of self is so challenged. You lose a lot of things that are part of your identity," she says, citing hair loss, days off work, the removal of a breast and severe scarring. "So, for me, running has helped me stay true to who I am." 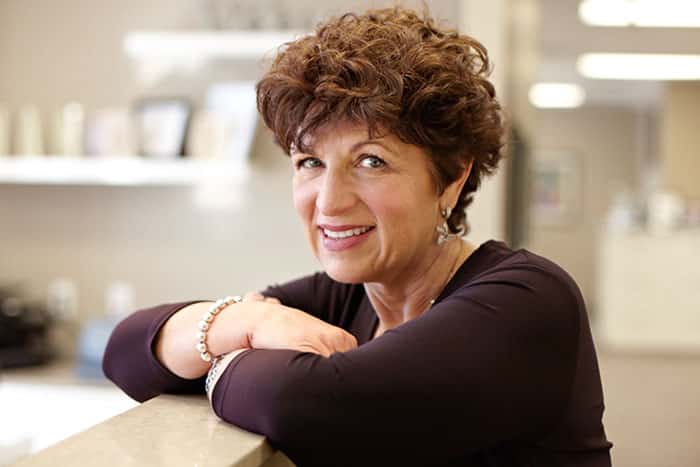 It all started with a routine radiation appointment—one that Audrey Guth needed to attend to ensure that her breast cancer wouldn't return. "You scan in and wait for them to call your name," she says. "It's almost like a factory. There have to be 100 people waiting." Audrey noticed one young woman in particular who was sitting with a squirming two-year-old on her lap. "I saw the tears welling up in the woman's eyes," she remembers. "It looked like it was taking every bit of her energy just to be there."

That's when Audrey had an epiphany. She already owned an agency called Diamond Personnel that provided nanny services for families, often with working mothers. Why couldn't she start a not-for-profit organization that would do the same thing for mothers with cancer? Though Audrey was still dealing with her own illness, her entrepreneurial spirit took over, and she secured a $60,000 grant and began recruiting volunteers.

In 2009, the Nanny Angel Network (NAN) was born. It's utterly unique in the services it provides, particularly because the volunteer "nanny angels" are trained to speak with children about cancer and dying. "Most families are uncomfortable having that conversation," says Audrey. "But kids ask questions that need to be answered in an age-appropriate way to build resilience." And that's the biggest impact that NAN makes on the lives of these families—giving the children a trusted confidant who will stay with the family until three months after the mother's last treatment, or up to a year after her death. 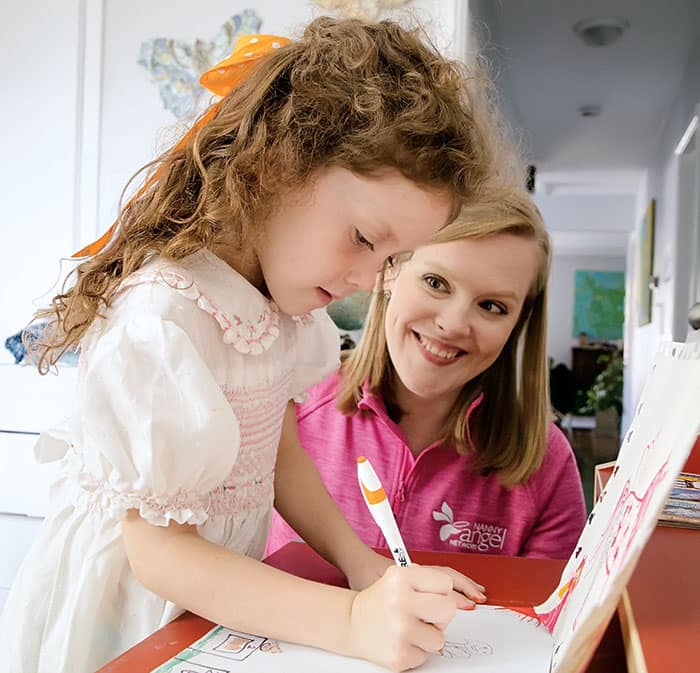 Leigh Scholl (Nanny Angel of the Year, 2015) was matched with Janette Buckley from 2014 to 2016, taking care of Janette's children, Beth (pictured) and Liam. Beth was only five when her mom was diagnosed; Liam was three. Image by: Laura Bombier

One family stands out to Audrey as an example of the lives NAN has impacted. The mother was diagnosed with Stage 4 breast cancer when she was seven months pregnant. The doctors did an emergency C-section and started treatment right away. That left her husband with a toddler at home and a baby in neonatal intensive care while he was driving a bus to make ends meet. For the entire year of this woman's treatment, a nanny angel visited her daughters for four hours each week to play games, read books and, near the end, prepare the elder child for her mother's death. Audrey visited the patient in palliative care a couple of weeks before she died. "I asked, ‘Are you afraid?' " remembers Audrey. "And she said, ‘No. I know NAN is going to be there for my girls, so I'm not afraid.' "

Want to get involved? NAN is always looking for nanny angels in the Greater Toronto Area. You must have at least one year's experience working with children outside your family, but NAN will train you to talk to kids and answer questions about cancer diagnosis. Visit nannyangelnetwork.com to learn more.

BRETT MCCULLY
After a mastectomy at age 29, Brett McCully regained her self-esteem when she discovered a line of flirty, feminine bras. 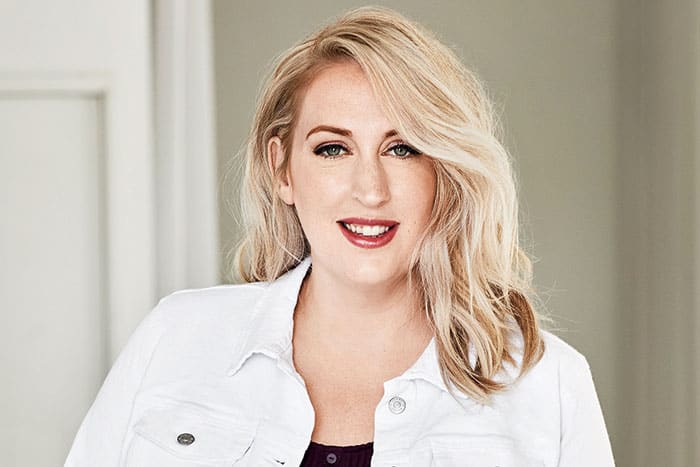 For Brett McCully, the decision to remove her left breast after a cancer diagnosis was easy. Dealing with the emotional repercussions after surgery was not. She remembers the day she stood in front of the mirror and peeled off her bandages to reveal her lopsided chest. "I couldn't believe how large the scar was," she says. When she was told she'd require a second surgery that would take even more tissue, she broke down: "I felt ugly. I felt like less of a woman. I hid for a long time because I was ashamed of what I looked like."

It wasn't until Brett discovered La Vie en Rose's Muse line, a collection of bras for postmastectomy patients, that she began to regain self-confidence. "I loved shopping at lingerie stores and finding beautiful bras, but that was taken away from me until I found Muse," she says. "The moment I put on one of those designs, I felt instant happiness. It's cut lower, so there's no chafing on my scar. The fabric doesn't irritate my incision, and the corrective pad looks and feels just like a regular breast." The bras are pretty and affordable—a big plus since Brett was off work for treatment.

After she found the dose of femininity that changed her perspective, Brett posted on La Vie en Rose's Facebook page. "I wanted to thank them for making me feel like me again," she says. "And to let them know what this product has done for my self-esteem by bringing normalcy back into my life." Upon sharing her story, Brett was asked to be an ambassador and model for the Canadian brand's Fall 2017 Muse line—and she jumped at the chance to promote the collection and help other women fighting to feel feminine postmastectomy. The role has also given new meaning to her harrowing experience. "It's been great therapy," she says, "knowing that I might help someone with the same issues."

Boobyball
With a 2017 theme of Get Physical—a nod to the benefits of exercise for risk reduction—and the promise of outrageous '80s costumes, photo booths, fun activities and plenty of Instagram-worthy decor, Rethink Breast Cancer's annual Boobyball "fun-raiser" is the furthest thing from a stuffy gala dinner and silent auction. This year, the event will take place in Toronto, Calgary, Vancouver, Ottawa and Halifax in the second half of October, and will add to the fundraiser's more than $4.3 million raised for education and the support of young women on their breast cancer journeys.

Pantene Beautiful Lengths
It takes eight to 15 ponytails to create just one real-hair wig, which can cost upward of $1,000, a huge expense for someone who has already taken on the financial burden of undergoing treatment (depending on the type, the cost varies under different provincial plans; plus, without income, transportation and housing can cause considerable financial strain). Whether you donate $8 or eight inches of hair, Pantene's Beautiful Lengths program will turn your donation into a wig that will help a woman feel normal in the face of uncertainty.

The Canadian Cancer Society CIBC Run for the Cure
Dust off your sneakers on Oct. 1 and run or walk to raise funds for breast cancer research and services. Since the 1980s, all the moola raised has gone to the promotion of early detection, increase in screening frequency and innovation of new and more effective treatments, which together have resulted in a 44-percent decrease in breast cancer deaths in Canada.

What it's like to survive breast cancer and rebuild your life

Breast cancer survival rates are on the rise, but life after treatment can still be tough. Here's how two women overcame body image issues, anxiety, relationship woes and fertility complications.