Share
Share
Welcome to my very first post for The Home & Garden Blog! I'm really anxious to share some inspiring and useful ideas, projects, tips and advice with all of you. I've always appreciated and enjoyed the personal connection I've had with our Canadian Living readers over the years, so let's keep the dialogue going. I'd love to hear from you! Are you a shutterbug like me? Scroll down and click the "+Image" link to add your best garden photos to the comments section at the bottom of this post. Every photo submitted before Sept. 1, 2012, gets a chance to win a signed copy of Charlie, Winnie and the Bluebirds: The Story of Ellis Bird Farm (2012) by Myrna Pearman. A name will be chosen randomly from the submissions. (For full eligibility details, read the complete contest rules.) [caption id="attachment_196" align="aligncenter" width="300" caption="One of my favourite garden photos: An American goldfinch munches on sedum by the water garden at Ellis Bird Farm in Alberta. Photo by Karen Kirk"] 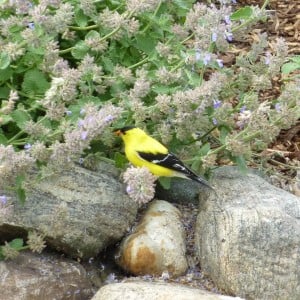 [/caption]   Day-tripping in rural Alberta  Whether I'm visiting a new city for work or pleasure, or just sticking close to home, I love to plan mini-getaways and day trips with friends to explore new places in search of unique shops, museums, restaurants, parks, galleries and flea markets. On a recent visit to Alberta to cover the Calgary Stampede (Hang on! I'll tell you more about this in an upcoming blog post.) I asked  TravelAlberta.com and  visitCalgary.com to direct me to some must-see, off-the-beaten-track, garden-inspired destinations on the long drive from Calgary and Edmonton. They didn't disappoint. Here's just one of many unforgettable places I loved visiting.   [caption id="attachment_192" align="aligncenter" width="400" caption="First stop: Ellis Bird Farm. The original grain elevator built by Charlie Ellis and his dad in the early 1900s. Photo by Karen Kirk"] 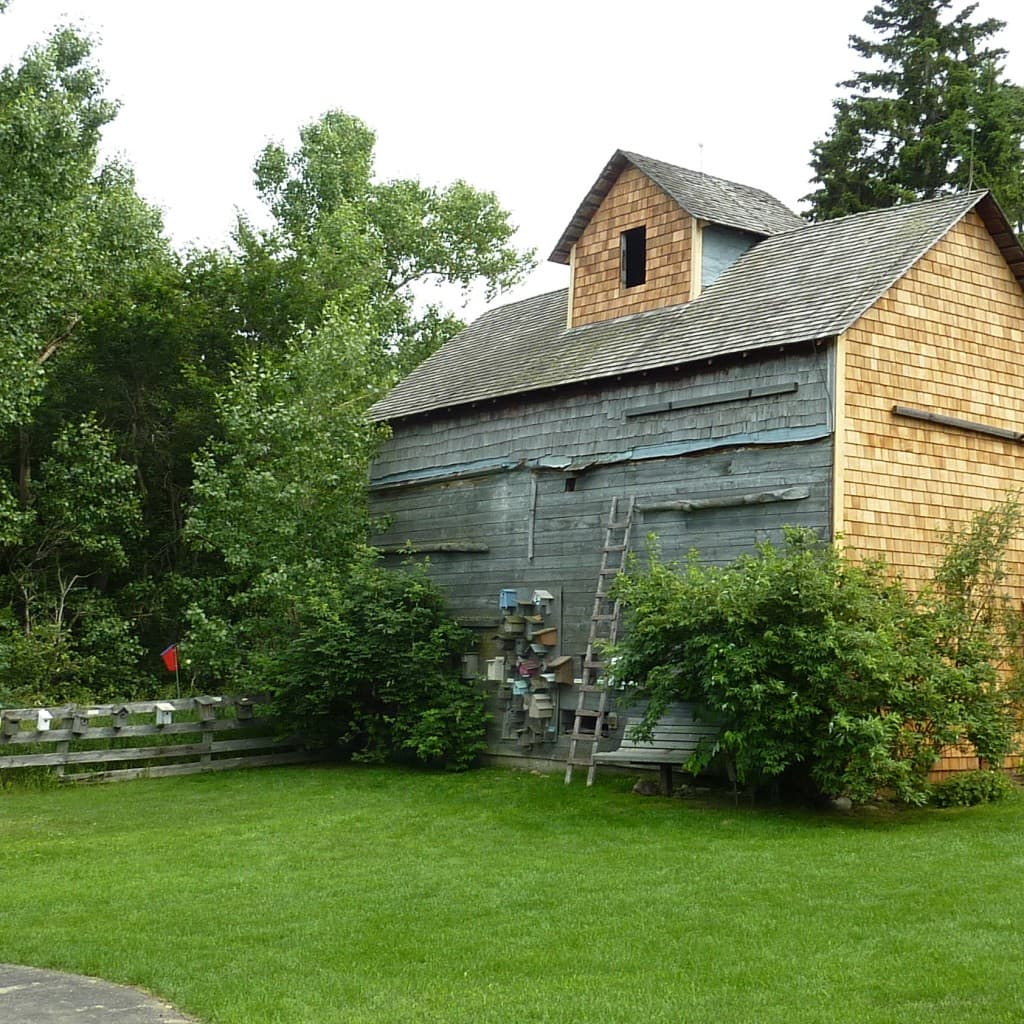 [/caption]   Ellis Bird Farm The Ellis Bird Farm is located in Lacombe, just north of Red Deer in Alberta. This is the story of a small community that formed a partnership with local industry in 1982 to preserve the heritage of a family farm and conservation area, and honour the wishes of the former owners to protect and maintain their farm's natural bird and wildlife habitats long after they're gone. [caption id="attachment_190" align="aligncenter" width="300" caption="Farmers and conservationists Charlie and Winnie Ellis, who are no longer with us, show off Charlie's hand-built nesting box. Photo courtesy Ellis Bird Farm"] 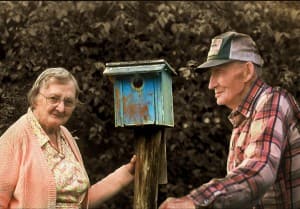 [/caption]   It all began when John and Agnes Ellis arrived in Lacombe in 1906 with their four children to set up their family farm. After their parents passed away in the '50s, two of the four children, Winnie and Charlie, remained on the farm and set out feeders, planted butterfly and hummingbird gardens, and built ponds and shelter areas for all the birds and wildlife that visited their farm. [caption id="attachment_183" align="aligncenter" width="410" caption="Hundreds of adorable nesting boxes have been sent from across North America for the farm's mountain bluebirds. Photo by Karen Kirk"] 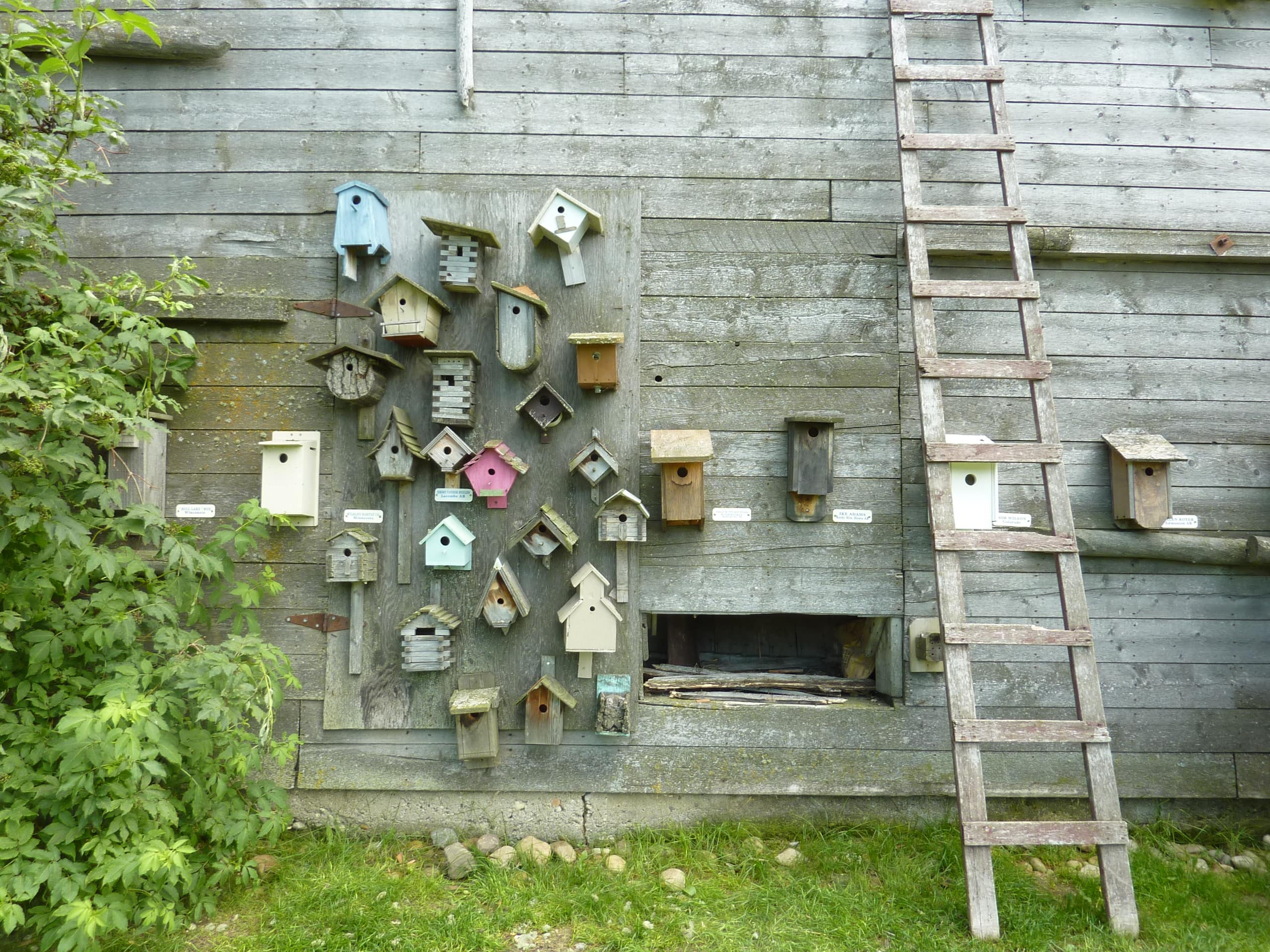 In the '50s, Charlie noticed that the mountain bluebirds had declined in central Alberta, so he began building boxes and placing them around the farm. By the late '70s, he had built hundreds of nesting boxes, helping the farm grow one of the largest populations of mountain bluebirds ever recorded. 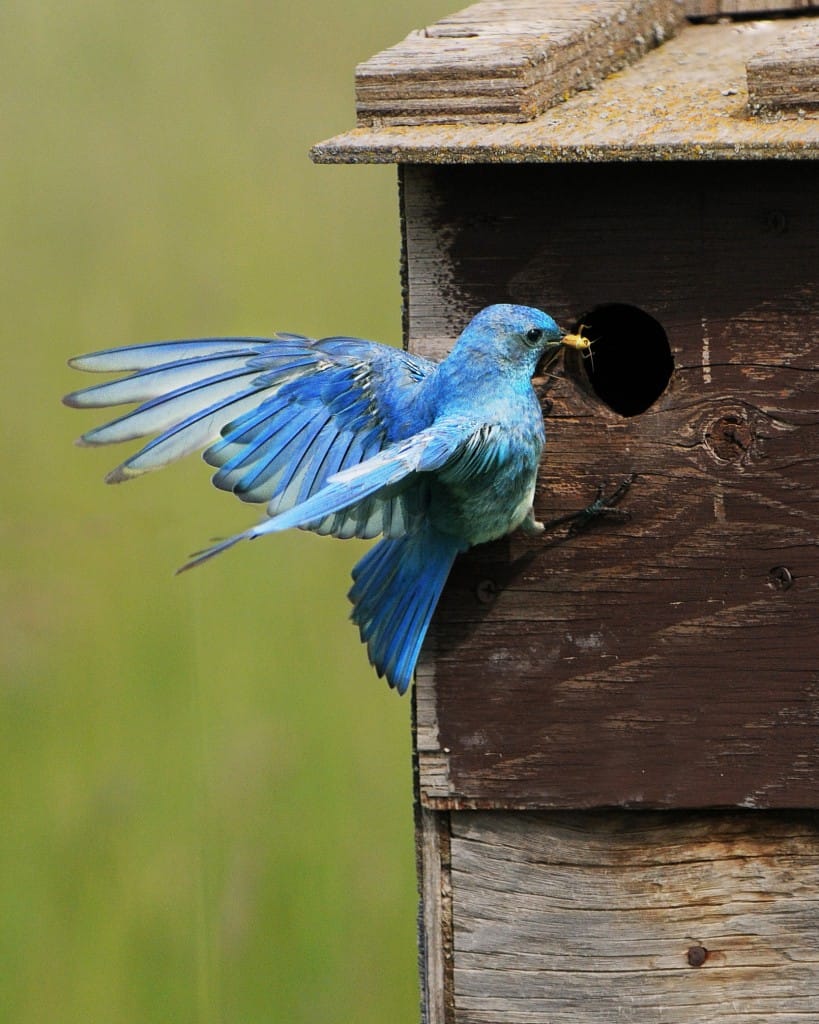 [/caption]   Encourage songbirds to nest in your yard by setting up easy-to-build nesting boxes. Here's how. Purple martins love it here, too

Book author and columnist for the Red Deer Advocate, Myrna Pearman has been the farm's biologist and site services manager since 1986. The day I visited the farm in early July, I found Myrna Pearman up a ladder photographing, documenting and banding a new brood of purple martin fledglings for her ongoing research. 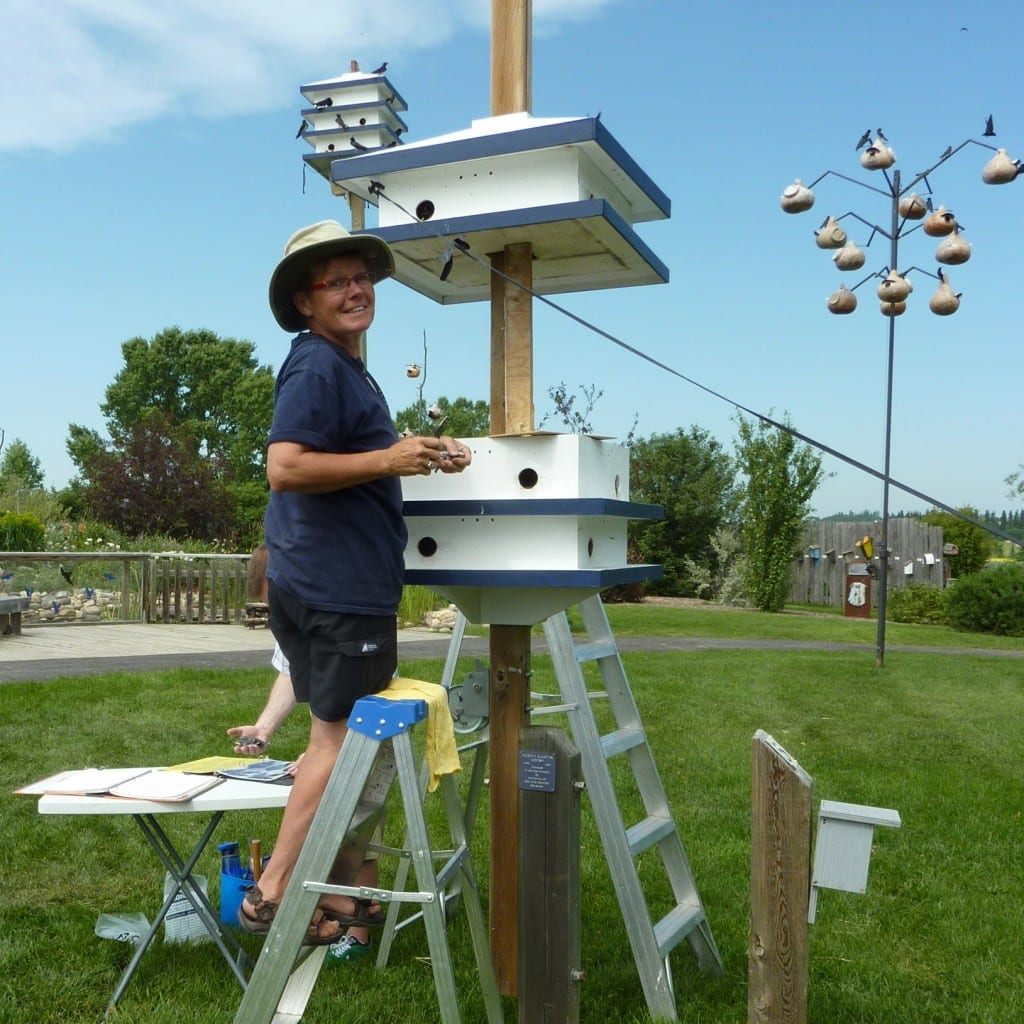 [/caption]   "Purple martins spend most of the year in the Amazon rainforest in Brazil and come up to Alberta just long enough to raise a family," says Pearman. [caption id="attachment_191" align="aligncenter" width="300" caption="Myrna Pearman with a purple martin fledgling.                Photo by Karen Kirk"] 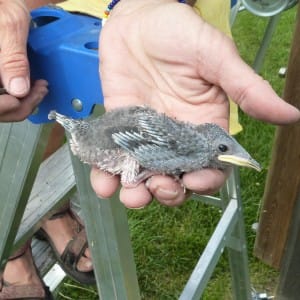 [/caption]   Education and preservation One of the highlights for the hundreds of schoolchildren who visit the farm each summer is dipping for pond creatures off the pier. Illustrated signs help kids identify their discoveries and teach them about the diversity of life in a healthy wetland. [caption id="attachment_188" align="aligncenter" width="400" caption="Surrounded by a large perennial bed that includes an alpine and bog garden, the water garden is a haven for birds and other wildlife. Gardens are maintained by head gardener Cynthia Pohl.  Photo by Karen Kirk"] 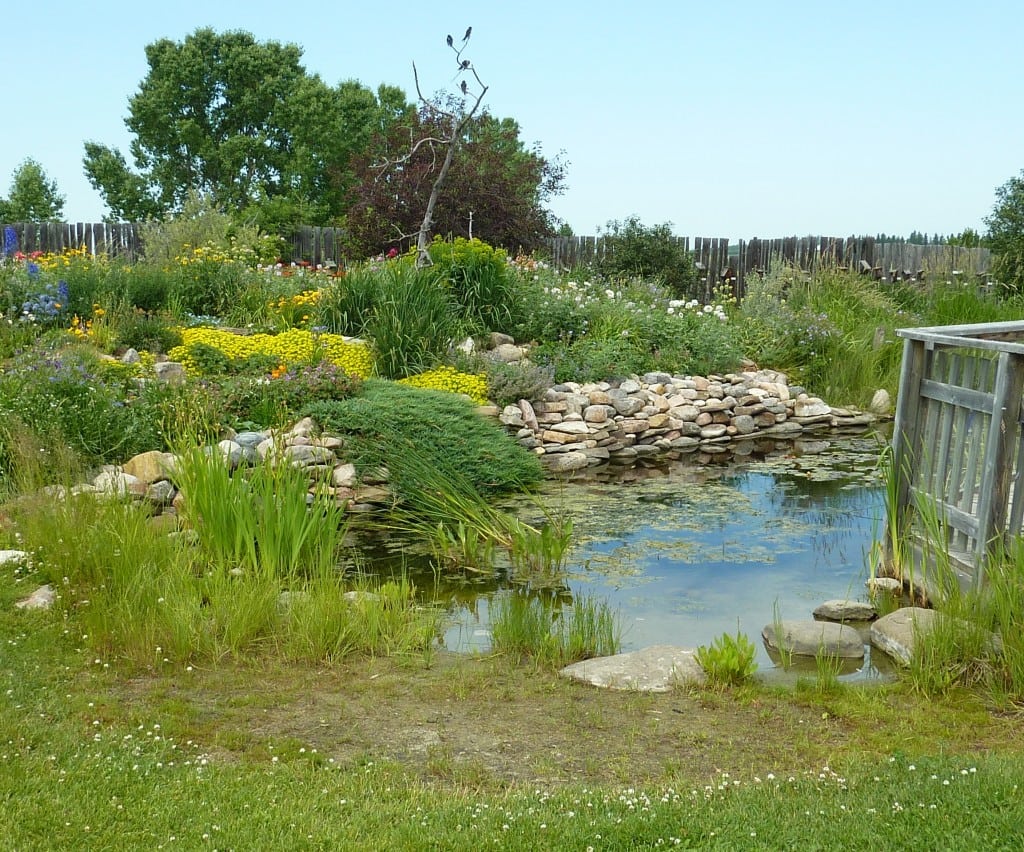 [/caption]   Peace and quiet Songbirds sing all around me and make the stunning vistas of this perfectly preserved natural environment even more magnificent and peaceful. Signs designed by a local artist provide detailed information about the history and special features that dot the acreage - a beaver lodge (watch the beavers and birds live on webcams here), a dipping pond, water gardens, hummingbird and butterfly gardens, the Tea House and more. [caption id="attachment_193" align="aligncenter" width="400" caption="Signage teaches visitors about the farm's biodiversity. Photo by Karen Kirk"] 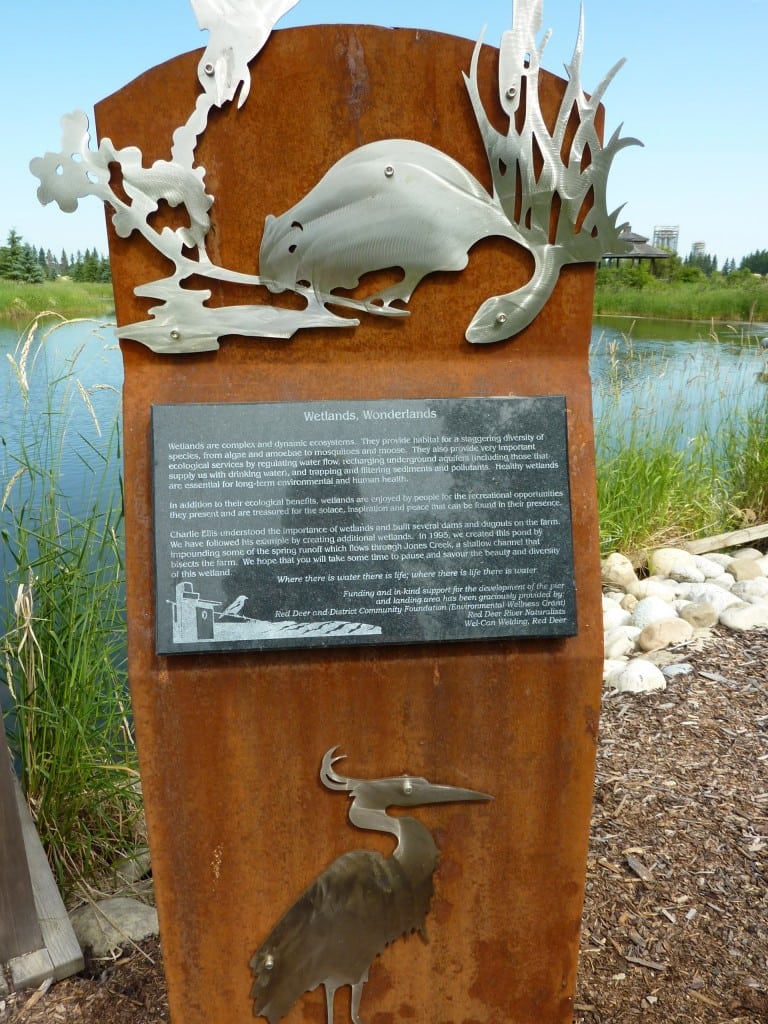 [/caption]   A nonprofit company and working farm, the Ellis Bird Farm is open from May 21 to Sept. 3, 2012. August is jam-packed with special events. For a list of upcoming events, visit ellisbirdfarm.ca.
[caption id="attachment_197" align="aligncenter" width="300" caption="The original farmhouse has been converted into the Tea House. Photo by Karen Kirk"] 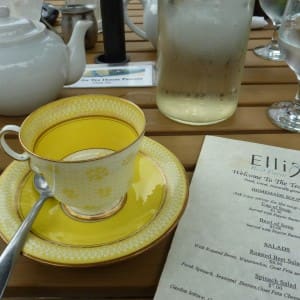