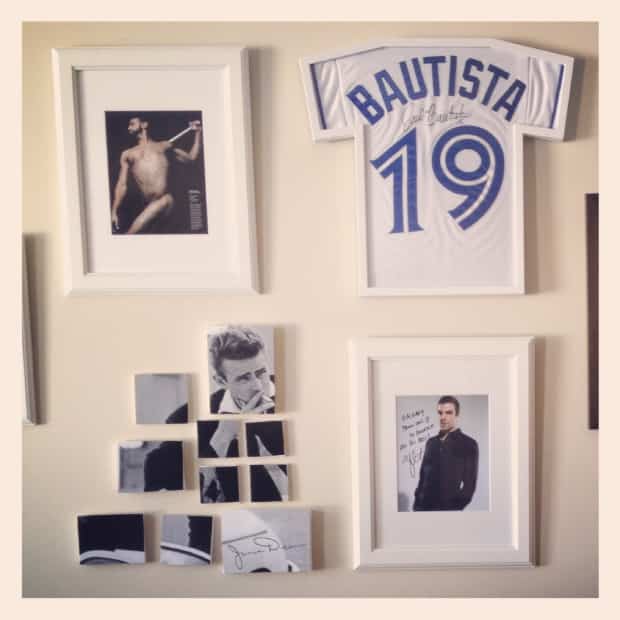 Yesterday's unprecedented sunshine (I've never been SO happy to have to wear my sunglasses!) inspired me to tackle something I'd been putting off all winter. Namely, hanging a bunch of photos and artwork in the place of a large, mass-produced framed print that has hung on the wall behind my sofa for far too long.

In lieu of said print, I went to the other extreme, opting for a series of art pieces that are much more personal. I'd been meaning to frame my signed Jose Bautista jersey ever since I discovered Umbra's amazing T-shirt frame, and I honestly couldn't be happier with the result. It's a fantastic way to display autographed sports memorabilia, and a total steal at just $30 a pop. Obviously, I had to pair this with a shot of the Bearded One himself in one of IKEA's pre-matted Ribba frames.

For balance, I hung a second white matted Ribba frame at the bottom right, this time displaying another prized autograph. And then, at the bottom left, I put one of my own Marilyn Denis Show DIY projects into practice, by "pixellating" a favourite poster. To the get this fragmented look, I laid the poster flat, and placed a series of craft store art canvasses across the surface. First tracing the outlines of the canvasses, I then cut out each segment, and pasted it onto the corresponding canvas. Hang them on the wall in a semblance of their original order for a one-of-a-kind take on a mass-produced poster!