Share
When I was 25 years old, I fell in love with organic gardening enthusiast Eliot Coleman. Each week, I sat glued to the television in my Vancouver apartment watching the host of Gardening Naturally talk zones, crop rotation and root cellars. His passion for this greener way of growing changed the way I looked at food and how I envisioned my life. From that point on, my mind was made up: I wanted a farm.

Four years later, my husband, Kevin, my mother, Betty, and I decided to pool our resources and realize that dream. The first stop on our hunt was a small blueberry farm in South Surrey, BC. It was an overgrown disaster, but I immediately knew this was our new home.

Just like that, we became the owners of 1.5 acres of land and 500 blueberry bushes, all well over 50 years old. The bushes were no good and blueberries peak at 35, people warned us. But no one was going to shatter our dream. I'd watched Eliot Coleman. I knew it all.

As it turned out, I knew nothing.

That first summer, I killed more plants than a nursery sells in an entire season. I watched the birds feast on $200 worth of organic vegetable seeds. But those supposedly past-their-prime blueberry bushes produced more than 2,700 kilograms of berries. Visitors arrived by the carload, overrunning our farm. To say we were overwhelmed would be an understatement.

Each year, we got better—and so did the blueberries. I learned to cover my vegetable seeds to prevent the birds from eating them. I accepted that squirrels will always be faster than me. I discovered wild turkeys aren't that bright; ducks are disgustingly messy; and beavers take a shine to tall, freshly planted maple trees.

But the most important lesson has been to simply let Missing Goat Farm direct my life. I've made more mistakes in the vegetable garden than anywhere else in life, but each season brings with it another chance. After 15 years, I still can't grow a decent tomato; I'll never stop trying, though. Gardening has a never-ending learning curve. Get it wrong and you'll curse like a trucker; get it right and you'll burst with joy. 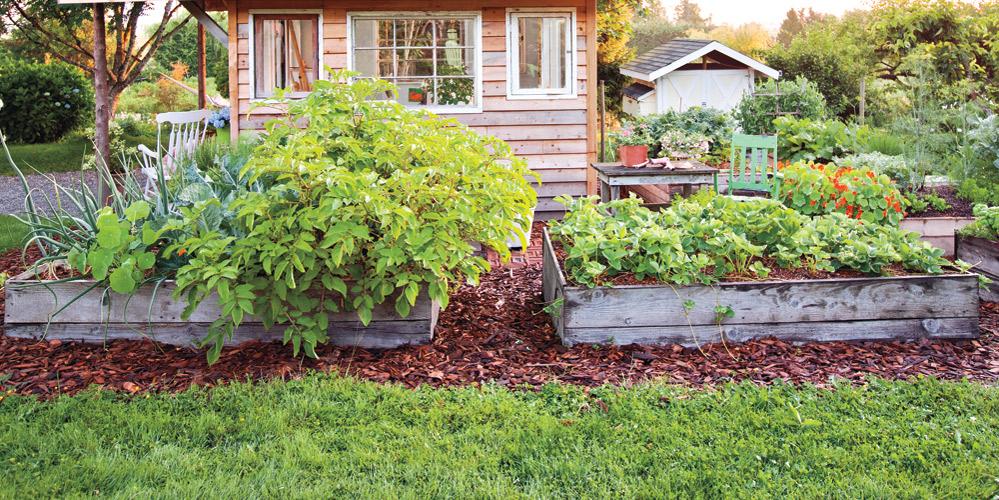 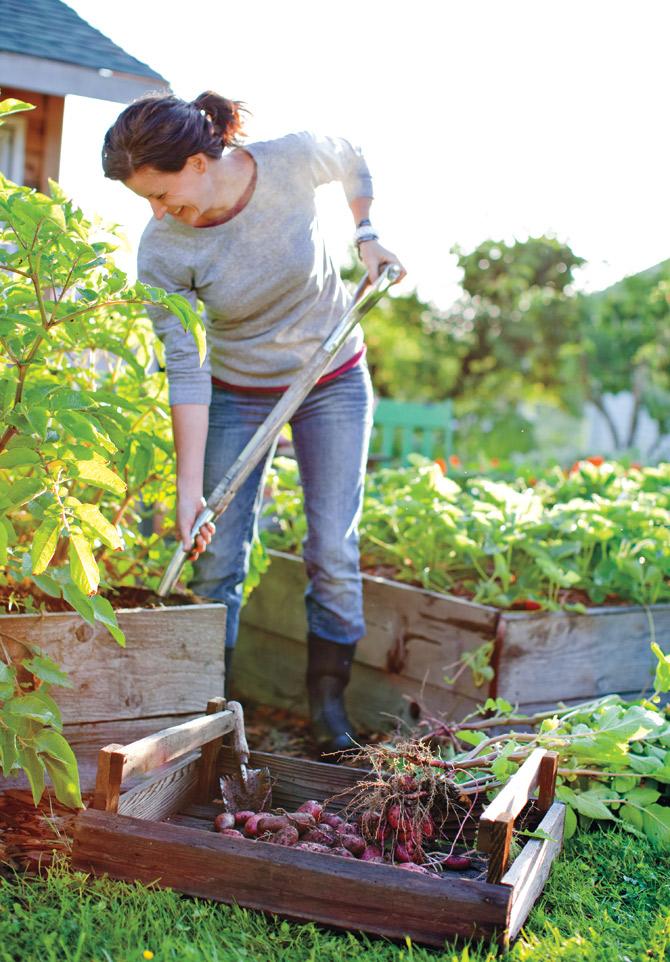 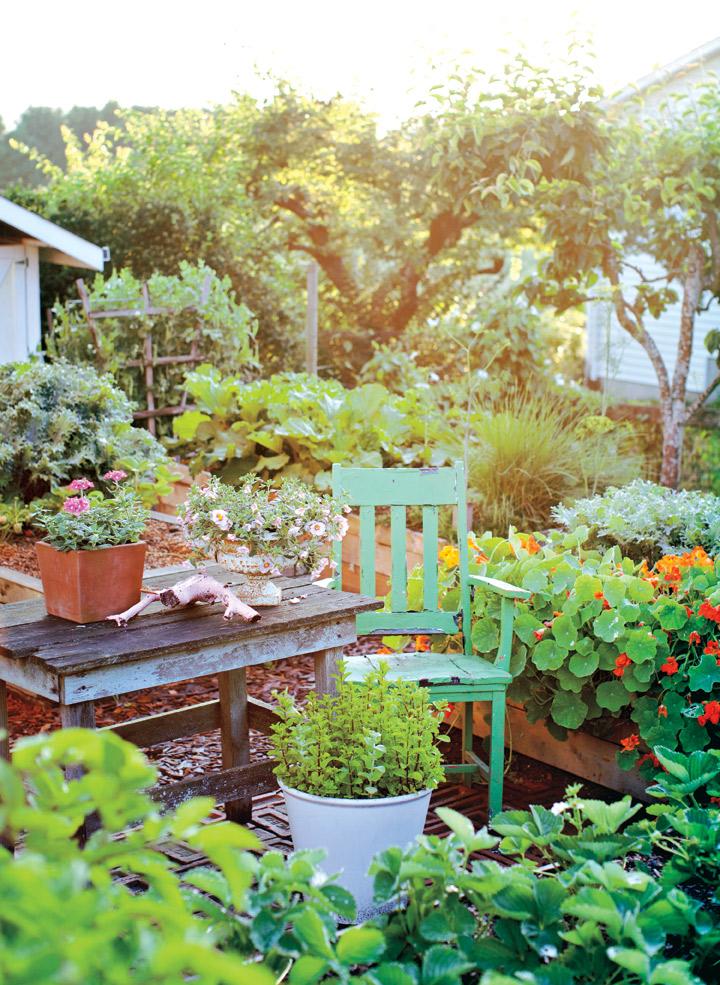 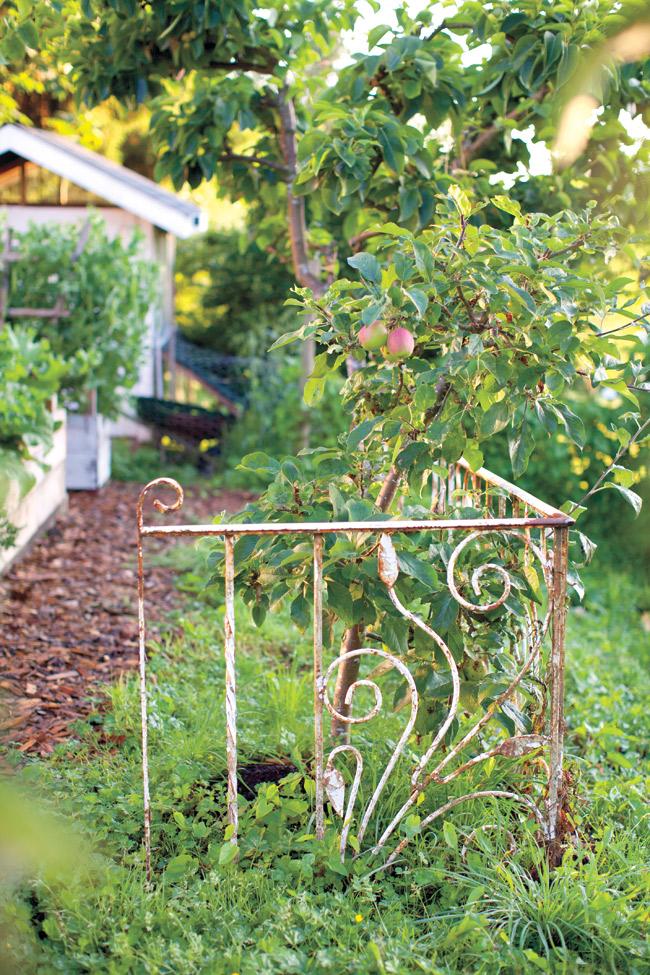 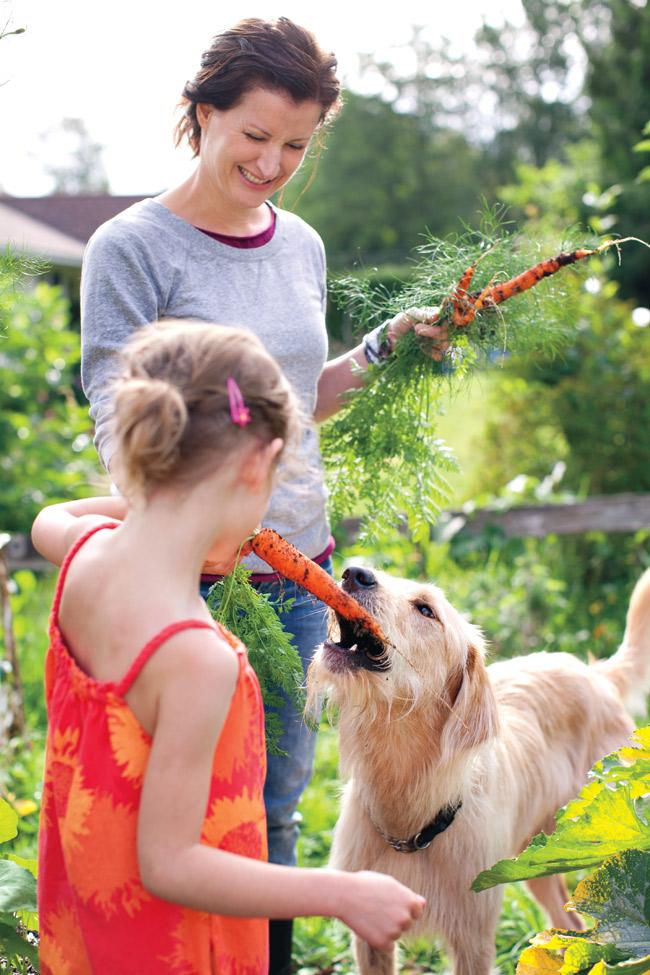 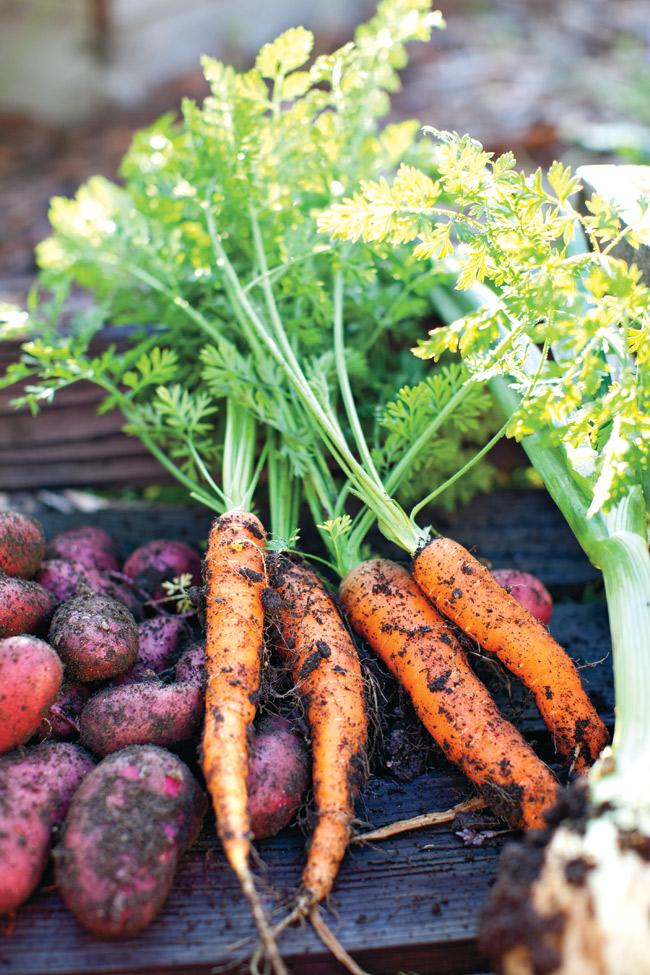 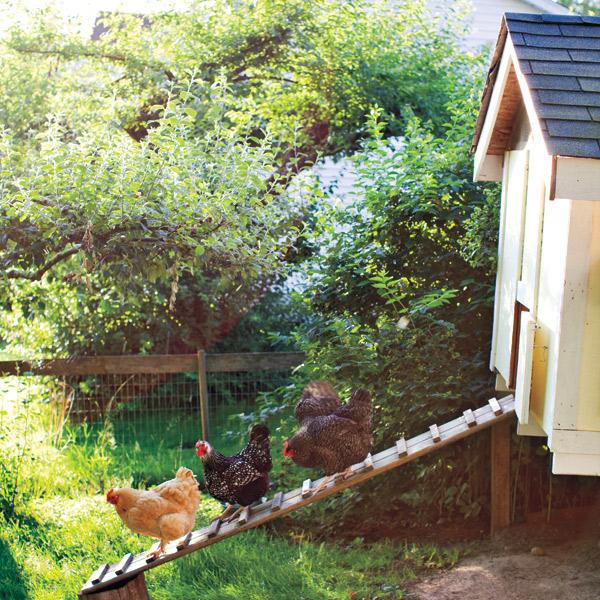 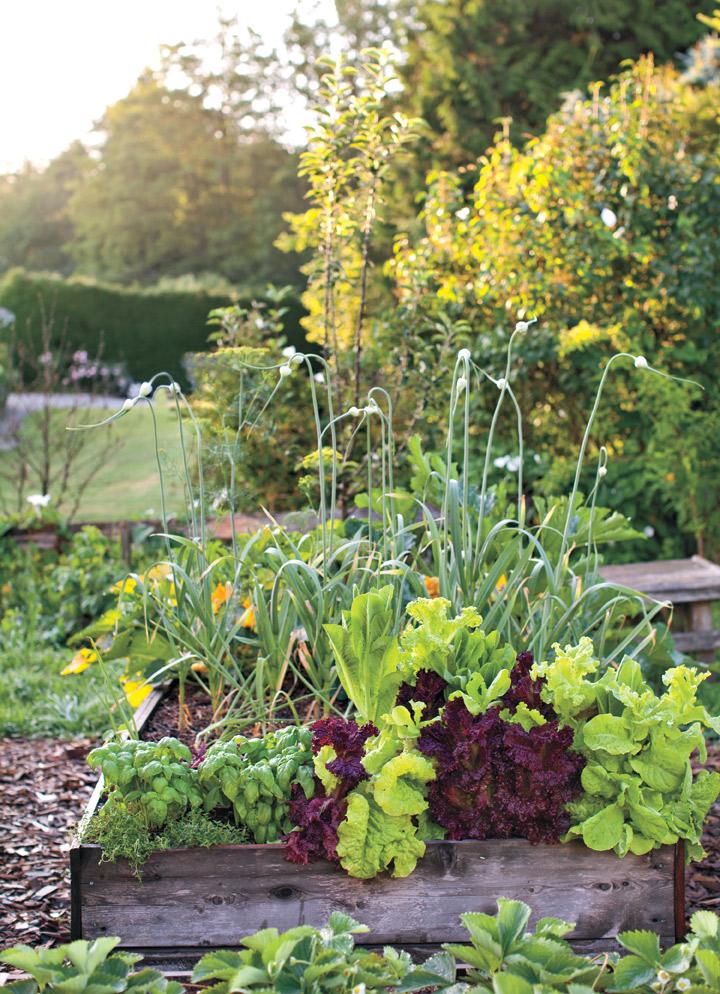 My daughter, Lily, and I plan the eight raised garden beds every winter. Five of the beds are filled with vegetables we can't live without—carrots, sugar snap peas, kale, potatoes, zucchini and onions. The other three contain perennial favourites—strawberries, rhubarb and a mix of David Austin roses and herbs. Roses in a vegetable garden may seem silly, but they always make me smile. Tip: Never use treated wood in your vegetable garden—the chemicals may leach into the soil.

Keep out the weeds

The older I get, the higher I want my vegetable beds. The garden consists of eight six- by four-foot raised beds, each constructed of wood planks and square posts at every corner. Inside, we laid down thick layers of newspaper and high-quality garden soil. The added height makes gardening easier on my back and keeps the weeds from creeping in at the sides.

I could have added another bed to this spot, but that would have been boring. Old bricks were used to make a "floor," so this space would feel like a room. Add an old potting table, a salvaged green chair, a branch that Lily painted pink, and a big pot of mint, and it's mojitos at 5 o' clock. Tip: Always keep mint contained, or it will take over your garden!

An old deck railing "frames" this dwarf McIntosh apple tree. The paths around the beds are covered in wood chips: They last longer than fine mulch and prevent weeds from poking through.

Get your kids involved

Seeing Lily eat food right off the vine is a privilege. Young children are so keen to pull weeds and water vegetables. Get them hooked on homegrown food by involving them in planning the garden and including a few of their favourite berries and vegetables.

- Add worm-filled compost and rotted manure every year. - Layer mulch on your garden in the summer to help prevent weeds and lock-in moisture. In the fall, scatter mulch on top of your beds, and use a pitchfork to fold it into the soil. - Consider soil additives. I use worm castings, but you can also buy bat guano (yes, that's bat poop) or alfalfa meal. - I use organic fish fertilizer on everything from the vegetables to the trees. (Just be sure to stand downwind when applying.) - Beware of freebies. Five years ago, my husband picked up "organic" compost the city was giving away. I'm still finding garbage in the beds.

Make room for some chickens

Meet the girls: (from left) Peep, Haddie and Johnny Drama. The chickens have taught Lily about food—where it comes from and why it's important to care for the animals that, in turn, provide for us. We spoil them with chicken garlic mash (find the recipe in my book), and they follow us around the farm, eating bugs and saving us from spiders. What you'll need: - A safe, secure run for them to roam every day - A dry, covered pile of dirt for bathing - A coop where they can sleep and lay eggs - Fresh water - Feed—I buy organic layer mash, but the occasional watermelon on a hot day is appreciated, too! - A little free-range time in the yard makes for a very happy hen

Mix your fruits and veggies

I've found that adding chipped blueberry cuttings around the vegetables creates a prickly barrier that slugs can't cross. Best discovery ever! Check out Heather's tips on creating a vegetable garden in your backyard.


Start planting those flowers with this spring planting guide.

How to create a vegetable garden in your backyard