Share
When a room has more than one role to play, there's virtue in decorating with a soft, subtle hand. Take designer Emma Comesotti's guest bedroom, for instance. Dressed in a muted palette of calming neutrals, gauzy sheers and barely-there patterned wallpaper, it's a space that's infinitely versatile—a trait that has paid dividends over the past year.

Originally designed as a sophisticated home office and headquarters for Comesotti's firm, Philosophy Design, the destiny of the light-filled room changed when Comesotti and her husband, Roy, found out that they were expecting. "We didn't want to move," says Comesotti, noting the kid-friendly nature of the condo's Yaletown, Vancouver, neighbourhood. "And because I was going to be taking time off of work, it didn't matter to me that I was going to lose the office."

In a matter of days, Comesotti transformed the 10- by 11-foot space into a peaceful nursery, swapping the credenza for a crib and the desk chairs for a cozy rocker, while keeping the room's existing bones and neutral palette intact.

"I know a lot of people prefer to do a nursery that's colourful, but it really worked for me to make it a restful space," says Comesotti.

And it seems baby Luca approves. "Seeing him enjoy the space has been the most rewarding part of it all." 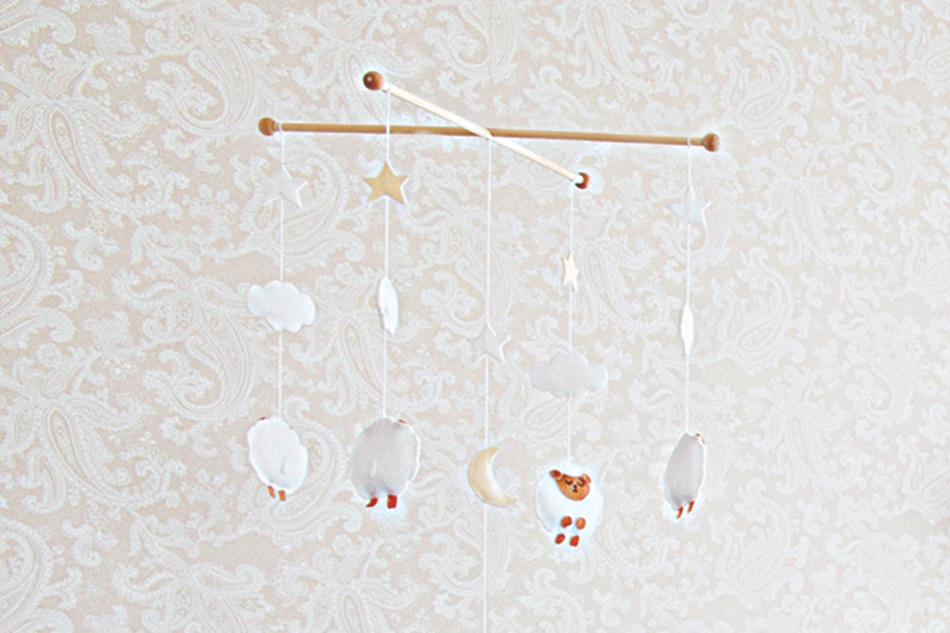 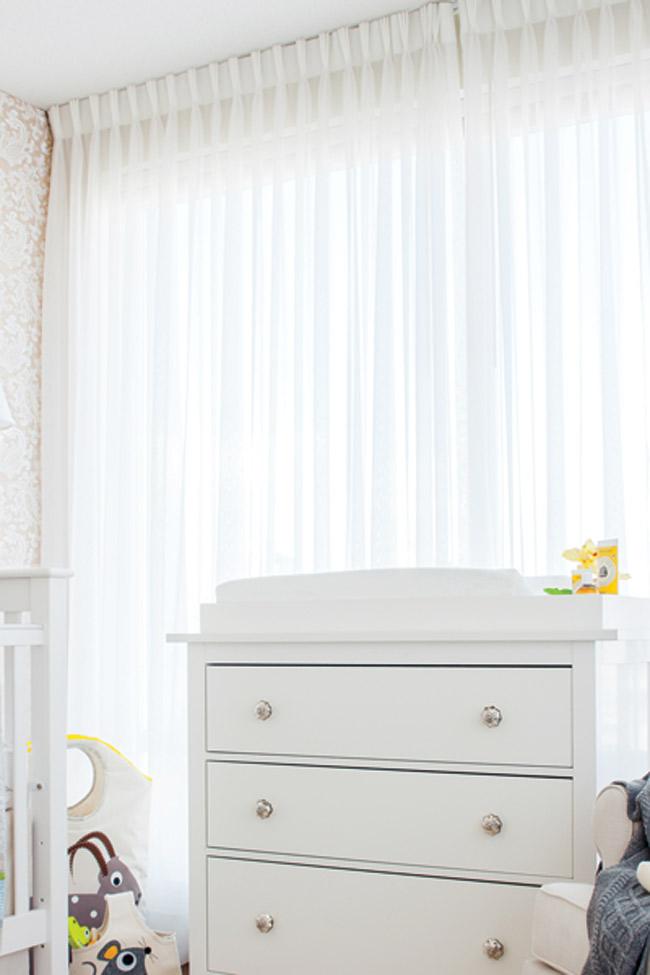 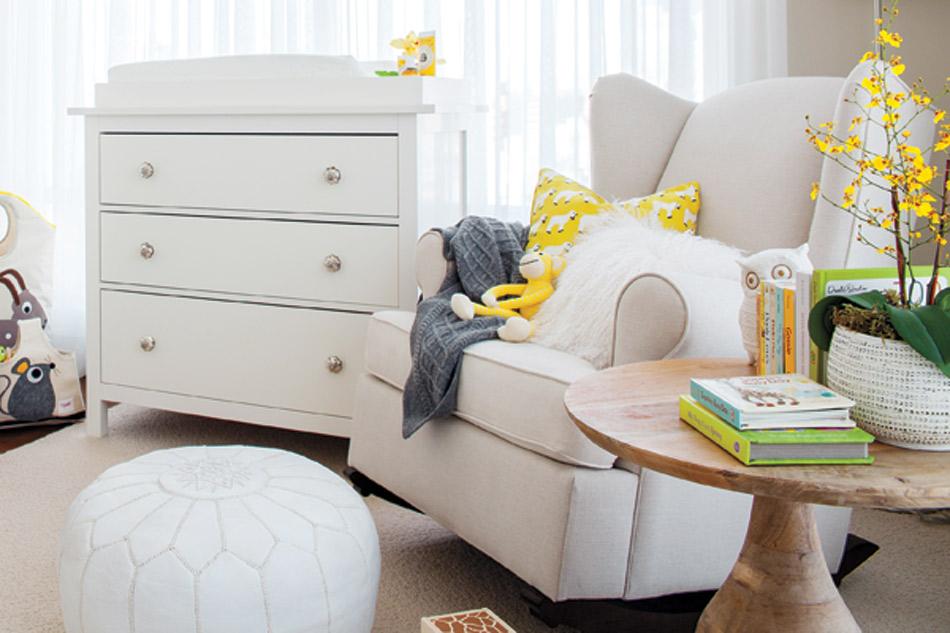 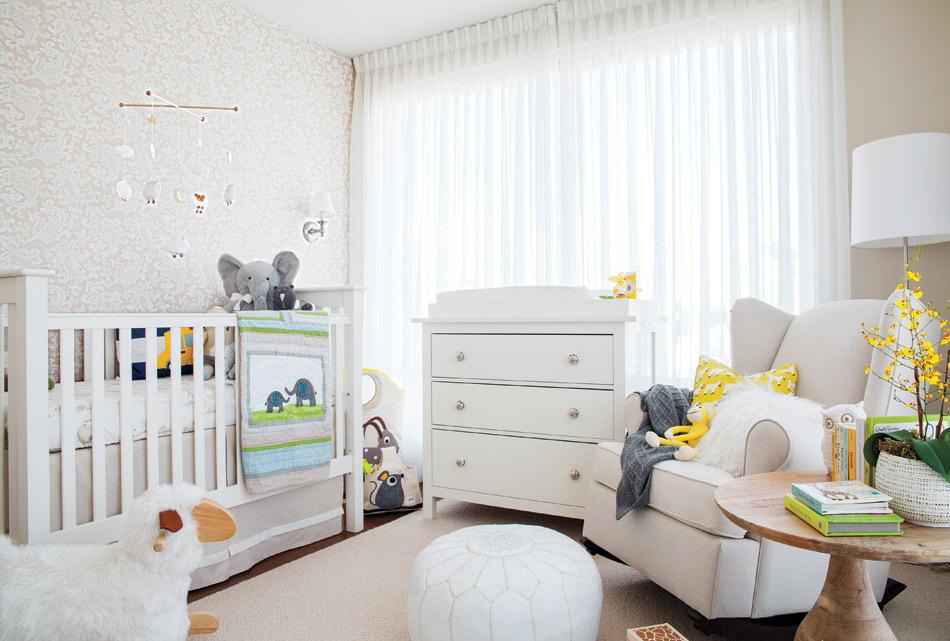 Make your own mobile

Comesotti is particularly proud of the mobile hanging above Luca's crib. It's a one-of-a-kind ornament fashioned from felt, thread and yarn, and making it was a family affair. "My dad helped me with the wooden dowels," she says. "It was nice that we had a little project together."

Billowing, sheer draperies lend an ethereal look, but they're not conducive to a baby's sleep schedule. "We installed blackout blinds as well," she says. "Even when they're drawn, you only see the effect of the sheers, so the room still feels very soft."

Kitting out a nursery can be incredibly expensive, but a mix of high and low price points balanced the budget. The dresser—used as a change table—was from Ikea, but the custom knobs are from Anthropologie. Likewise, the durable (but pricey) rocker from Pottery Barn is paired with an inexpensive side table from West Elm. Crib, rocking sheep, crib blanket, taxi cushion, stuffed elephant, potterybarnkids.ca. Printed sheep cushion, anthropologie.com. Lamb's wool cushion, chintz.com. Moroccan pouf, stuffed toys in crib, thecrossdesign.com. Goat hamper, lussobaby.ca.

The room's pale, neutral palette isn't just soothing, it's absolutely essential for a designer. "When you're working with colour, you don't want the colour that's in your office to affect your decisions." Feather Down OC-6 paint (on wall), benjaminmoore.ca. Check out our tips on how to turn a spare room into a nursery.


Check out our tips for picking out the best paint colour for every room in your house.

How to turn your spare room into a nursery