Share
Share
Don't worry - I'm not going to wax nostalgic about what the IKEA Catalogue means to me. (You had enough of that in last year's post.) Alright, maybe I will. Just a little. It's just that so many of my favourite picks from the 2014  IKEA Catalogue are rooted in nostalgia themselves. We've got reissues of classic IKEA designs that look as fresh and modern as they did on their original release, and a really retro flavour that transports me back to the IKEA Through the Ages Museum in Almhult; almost playing out like a "best of" collection of iconic design elements from the 60s, 70s and -- like it or not -- the 80s. What's more, the catalogue's focus on "Living with Children" has spawned some wonderful releases for wee ones, which frankly brought out the kid in me when I got to give them a test spin at the IKEA Catalogue preview party in New York last month. You ready? Start the car. START THE CAR!!     1) Lovbacken side table, $69, IKEA. [caption id="attachment_2477" align="aligncenter" width="514"] 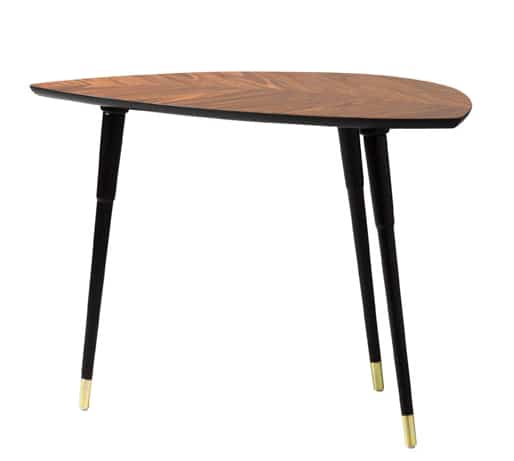 I've often thought that if I had the power to resurrect a single discontinued IKEA design from the past, the Lovet side table would be it... JACKPOT!
Photography courtesy of IKEA.[/caption] A tour of the IKEA Through the Ages Museum in Almhult, Sweden, begins with a single piece of furniture: the Lovet side table. Suspended from the ceiling as you enter the museum, it's a three-legged beauty that dates back to 1955, and holds the distinction of being the first flat-pack piece of furniture in the IKEA range -- an innovation that totally secured the future of the brand. Fifty-eight years later, the Lovet is back, albeit with the new name of Lovbacken. Virtually indistinguishable from the original, it's a lovely companion piece to the resurrected Strandmon chair that spearheaded last year's catalogue campaign, and it's now top of my IKEA shopping list.   2) Huset doll furniture, $13, IKEA. [caption id="attachment_2479" align="aligncenter" width="588"] 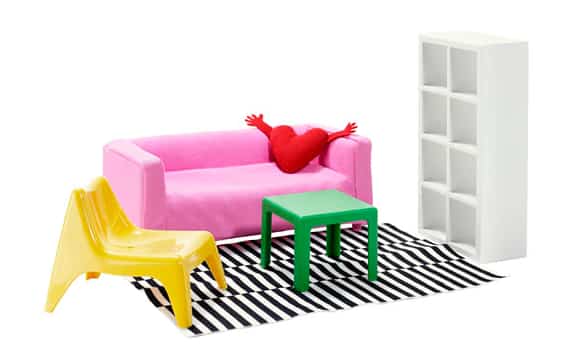 Honey, they shrunk the IKEA. Seriously, though -- can you handle the cuteness?
Photography courtesy of IKEA.[/caption] Aight, where was this when I was growing up? This brilliant release sees six iconic IKEA designs shrunk down to dollhouse proportions. The best part? The box that these pint-size furnishings come packaged in is covered in punch-out cardboard accessories that kids can colour to suit their dollhouse decor. I'd honestly snap up several of these box sets right now, as you'd best believe it's going to top everyone's Gift Guides for kids this Christmas. PS - Rumour has it, an actual dollhouse itself is coming down the pipeline... I'll keep you posted. :) [caption id="attachment_2483" align="aligncenter" width="600"] 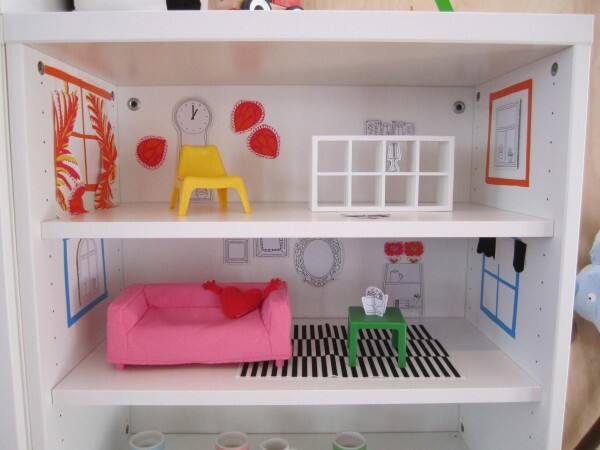 Even an ordinary bookcase can be transformed into a dollhouse! I snapped this shot from the IKEA Catalogue launch party in New York last month. Check out the adorable little black-and-white accessories that you can cut out of the packaging -- it even includes an Ung Drill mirror! *melts*
Photography by Brett Walther[/caption]   3) Stockholm sofa in Sandbacka green, $1,099, IKEA. [caption id="attachment_2484" align="aligncenter" width="482"] 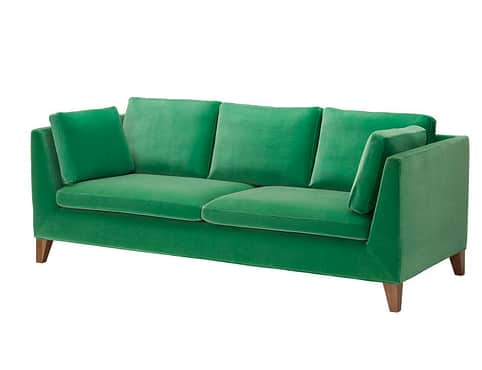 Green velvet, if you please... The new Stockholm Collection is included in the 2014 catalogue lineup.
Photography courtesy of IKEA.[/caption] In the September issue of Canadian Living -- on newsstands now -- I take an in-depth look at IKEA's new Stockholm Collection: a collection in which IKEA designers are encouraged to concentrate on quality craftsmanship, even if it means a slightly higher price tag than what we're used to. That Stockholm Collection is now part of the IKEA 2014 Catalogue lineup, and I think you're going to be blown away with the decadent "I-can't-believe-it's-IKEA" design elements like luxe velvets, real Canadian walnut, and liberal splashes of on-trend emerald. I absolutely adore the Stockholm sofa above, which juxtaposes daring emerald velvet with crisp tailoring that evokes a midcentury modern feel. Incredibly comfy, to boot.   4) Fabrikor glass-door cabinet in dark grey, $199, IKEA.  [caption id="attachment_2485" align="aligncenter" width="237"] 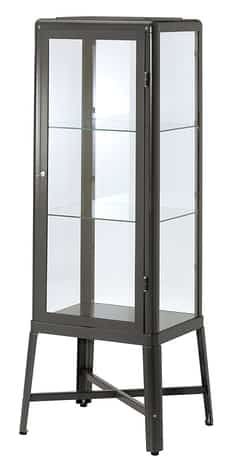 Super-vintage, super-versatile.
Photography courtesy of IKEA.[/caption] There's more than a touch of old-school apothecary style in the design of the new Fabrikor glass-door cabinet, but that doesn't mean it's limited to the bathroom. Sure, it would be a handsome addition to an unfitted bath (oh, how I'm dying to style this up with pretty bath props like jars of cotton balls, sponges and soaps!), but it would be just as at-home in the dining room, as a place to display your prettiest china and cut-crystal barware. (I have my decanters on open shelving right now, and the maintenance in keeping them dust-free is driving me bonkers -- this is a very attractive solution!) [caption id="attachment_2486" align="aligncenter" width="438"] 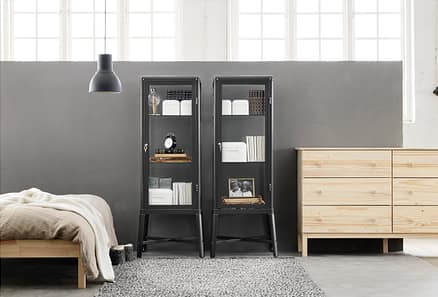 How about bringing the Fabrikor into the bedroom? I love the styling of this side-by-side pairing, complete with storage boxes to keep clutter out of sight.
Photography courtesy of IKEA.[/caption] 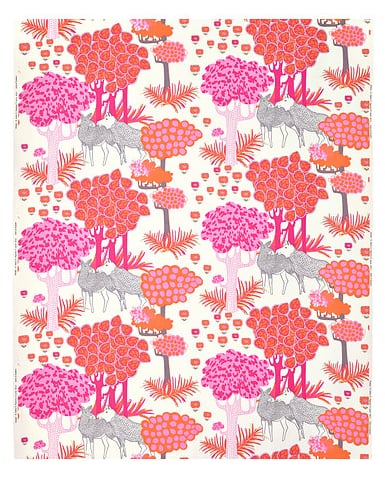 Chic psychedelia, printed on 100% cotton.
Photography courtesy of IKEA.[/caption] Everyone (myself included) always seems to forget this fact, but IKEA is a fab destination for bolt fabric. Take this fun and funky cotton print, for example. I'll always have a soft spot for the pairing of fuchsia and orange, just as I'll always have a soft spot for fabric that costs less than $10 a metre. I can totally see this working as a Roman shade in a kid's room, or even as an adorable upholstered twin headboard... So cute!   Have you got your copy of the 2014 IKEA Catalogue yet? What's at the top of your shopping list? I'd love to hear from you in the Comments section below!   Follow me on Twitter! Don't miss out -- subscribe to the Canadian Living Home & Garden blog!