The tears, the delays and the budget woes. TV host and DIY-er Karen Bertelsen shares what it's really like to renovate your kitchen.

I don’t remember much of the episode due to my state of mind at the time, but I’m told neighbours as far as three blocks away could hear my gasping sobs. It was the kind of hysterical crying that can only be brought on by one of life’s greatest horrors: the kitchen renovation.

You see, April 9 should have been the day my new kitchen was finally completed. The reno, which I figured would take around four months in the worst-case scenario, had somehow stretched into 12. With the confetti gun primed and ready, the only thing left to do was drop in the kitchen sink. And I did. And it was warped. And there wasn’t another in Canada. And I was looking at another six weeks before one could be shipped from the U.S.

My eyes immediately started vomiting tears. Things were not working out like they do on television. I should have known they wouldn’t. I’ve been a television host for years and even worked on a few makeover shows myself, so I’m very aware that TV Time and Real Time are two entirely different things. And now, Real Time meant six more weeks of washing dishes in my bathtub.

Ironically, this all started when I decided my smallish eight-by-15-foot kitchen needed a new sink—a farmhouse sink, to be exact. But then I measured my countertop and realized that the sink I liked wouldn’t fit. So I did what any rational person without any plans to remodel her kitchen did: I planned to remodel my kitchen.

My old kitchen was an authentic 1940s- style, complete with glass-fronted cabinets and charming wood drawers painted Depression-era green. They looked good; they were just a bit... temperamental. Pull too gingerly, and the drawers wouldn’t budge. Pull too hard, and they would shoot across the room, showering anyone in the vicinity with butcher knives and cleavers. So even though the kitchen was comfortable, it wasn’t at all convenient.

I had a renovation budget, and it was a fairly tight one. Because I’m handy and I have an entire website devoted to DIY projects (theartofdoingstuff.com), I knew I could save a lot of money on labour by tearing down the old cabinetry and installing the new flooring on my own.

I also knew where to spend. Although I have a good design sense, I’d never taken on a reno of this scale. So again, I did what any rational person would do:  I hired an interior designer whom I knew only from Twitter.

I’ve followed Carol Reed’s work (and tweets) for years and I knew I’d like her suggestions. Carol spends much of her time on the East Coast, and I live an hour west of Toronto, so I used her online design consultation service, which worked out great and cost considerably less than a flight to Halifax. I simply sent her photos and measurements, along with specs for the new stove and refrigerator I’d already lined up, and she came up with a layout that worked for me.

I told Carol I’d like my new kitchen to have the same authentic, comfortable feel as my old one, and that it had to be a true cook’s kitchen with easy access to everything. Knowing that I wanted Shaker-style cabinets on a blogger’s budget, Carol suggested I take a look at the Martha Stewart line at Home Depot. Ready-made and priced at a fraction of the cost of custom cabinetry, it was the perfect solution.

So yeah, it took a year. Yeah, I had to haul a cabinet over my backyard fence because it wouldn’t fit through the front door. And yeah, I cried—once. But I’d do it all over again. I love my kitchen so much, I squeal every time I walk in. And rumour has it, neighbours can hear those squeals as far as six blocks away. 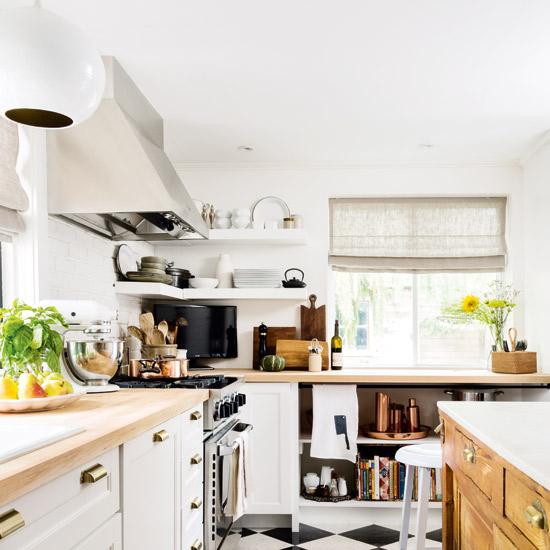 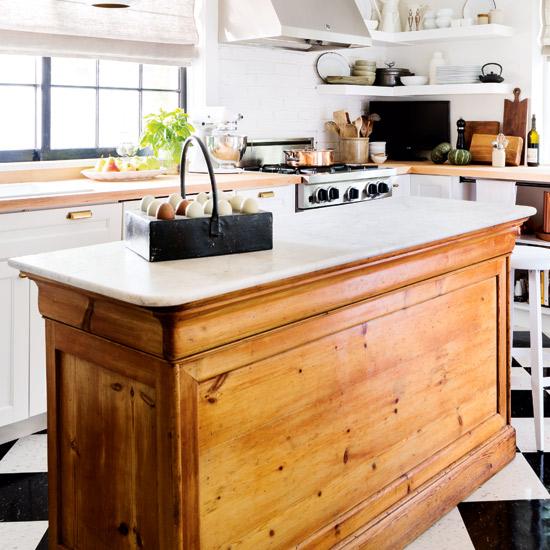 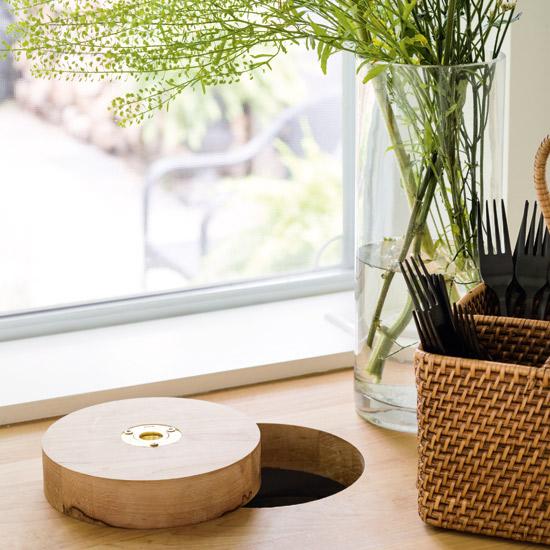 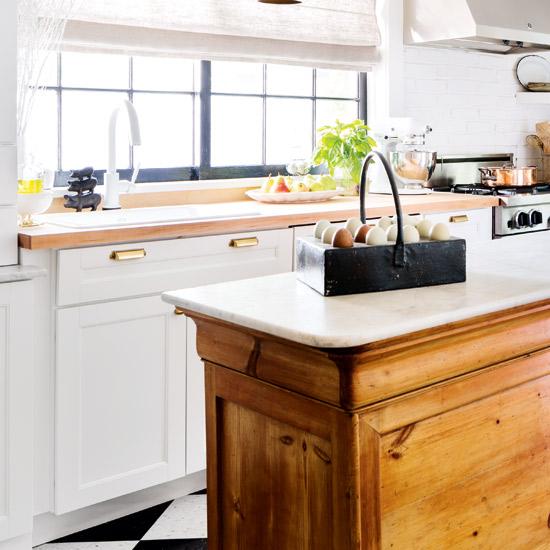 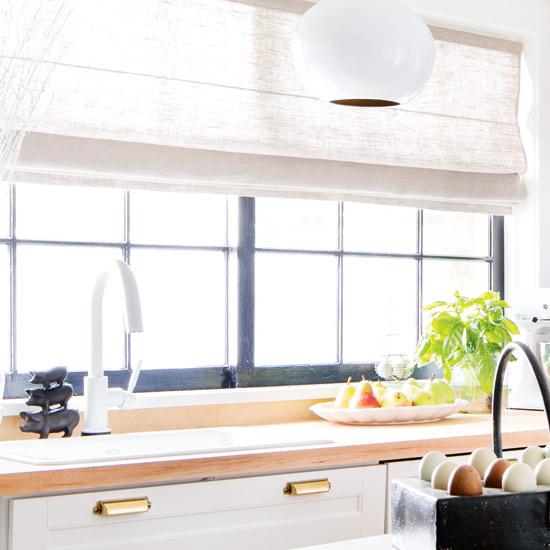 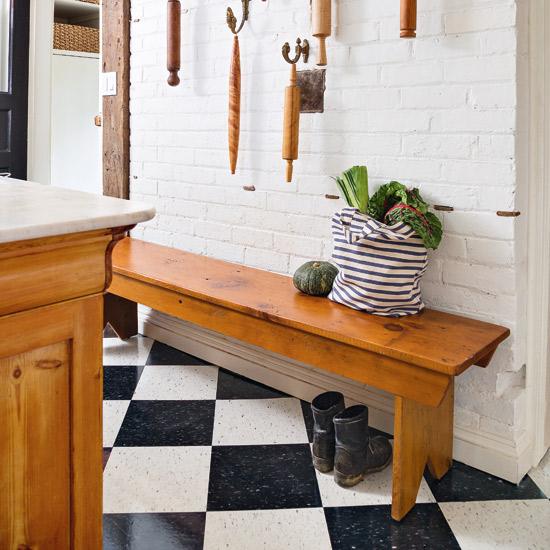 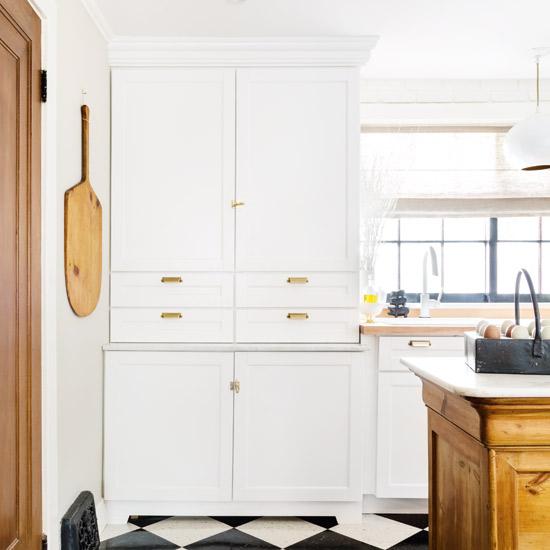 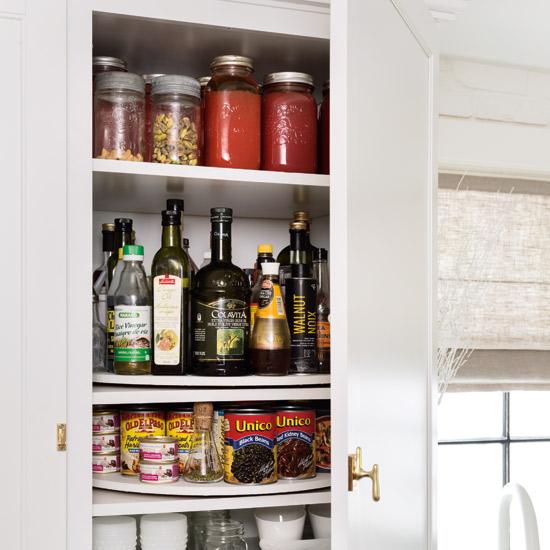 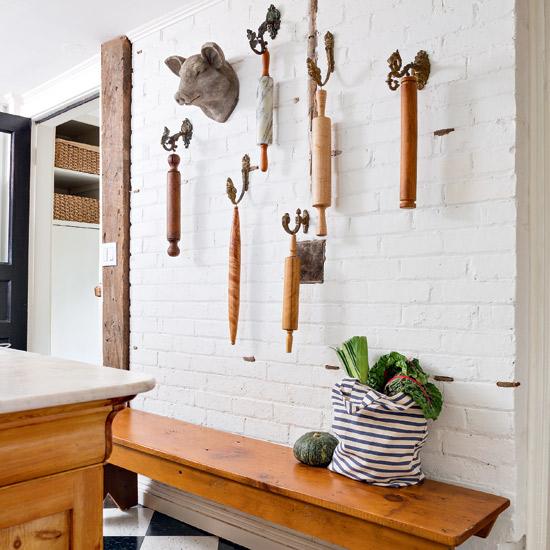 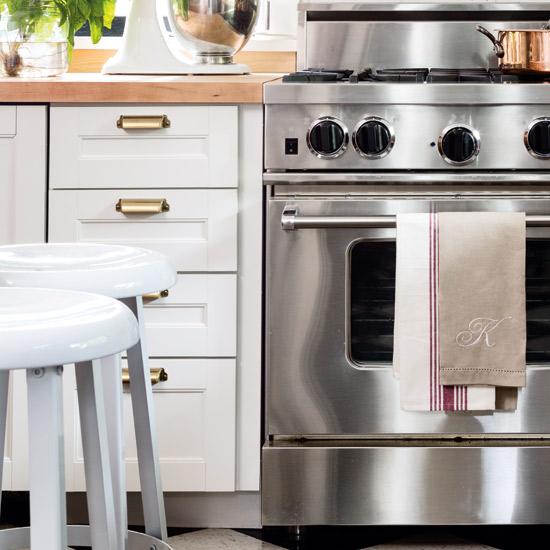 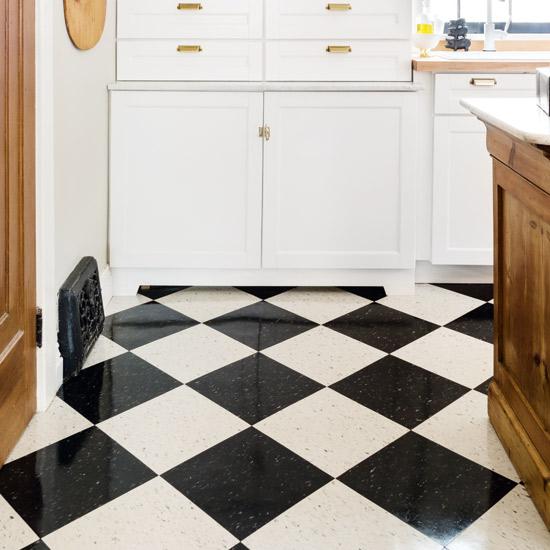 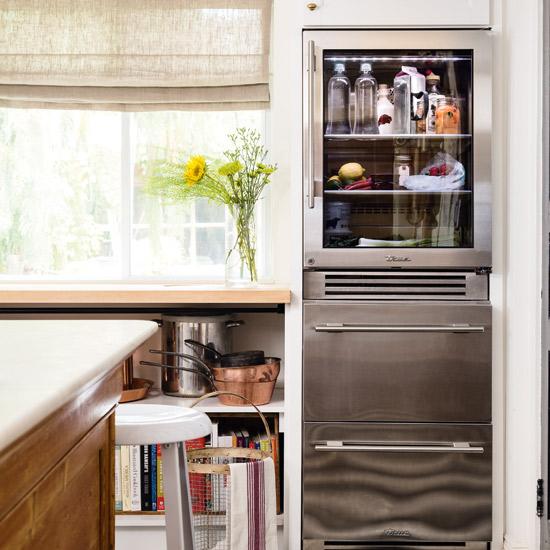 Ready-made isn’t always cheaper. I had sheet metal crafters make this custom cover for my exhaust flue for just $60. A prefab flue from an appliance store would run for $300 and wouldn’t have fit the range hood as seamlessly. Flue cover, Burlington Metal Supply. Threshold copper barware, target.ca.

At eight-by-15, I figured my kitchen was too small for a built-in island. What I’d envisioned at the heart of my kitchen’s new layout was a huge, worn butcher table. What I found instead was an antique store counter. Not only was it the perfect size, but it was loaded with more storage than a butcher table and topped with marble—the perfect work surface for pie dough. Antique store counter, clappisonantiques.ca.

Butcher block and Carrara marble are both notorious for staining and discolouration—a turnoff for most, but absolutely perfect for me. I love materials that age and develop a patina over time, and I wanted a countertop that I could read memories on years later. I ultimately chose butcher block because it provides a warm contrast to the marble top of the island, and is perfect for working pasta. I cut on it, bang on it and roll on it, then sweep all the mess into the scrap hole that empties into a compost bucket below. The scrap hole—which was cut into the countertop—is an idea I’d seen years ago on a cooking show, and I’d never, ever forgotten about it. Maple butcher block countertop, chrisstorefixtures.com. Matte black flatware, flatware caddy, indigo.ca.

It was my dream of a big farmhouse sink that prompted this entire kitchen renovation. But when the time came to draw up the plans, my kitchen designer reminded me that farmhouse sinks gobble up a whack of precious storage space in the cupboard below. So it was goodbye, farmhouse, hello, single-basin, cast-iron drop-in. Although I could have undermounted this particular model, I took a cue from authentic cast-iron sinks and opted for drop-in installation. Design, carolreeddesign.com. Kohler Iron/Tones cast-iron sink, homedepot.ca.

For someone whose hands are routinely covered in mud, dirt, marshmallow fluff, dust bunnies and salmonella (often all at the same time), getting a SmartTouch faucet was a no-brainer. Instead of grasping the faucet lever, you can touch any part of the tap and it will instantly turn on or off. In case you were wondering, a cat’s nose will not turn it on and off. No matter how hard you try. Solna touch faucet, brizo.com.

Having lived with ceramic tile in my kitchen for 14 years, I can’t say enough bad things about it. The cold, hard material showed every speck of dirt and chipped easily. Vinyl composite tile (VCT), on the other hand, lasts an eternity. Made of pressed vinyl chips, it’s the sort of flooring you normally see in cafeterias, hospitals and other high-traffic areas. It’s inexpensive and easy to lay yourself—which I did, obviously. Installing the square tiles in a diagonal black and white checkerboard, I did my entire kitchen, bathroom and mudroom for—wait for it—$265. And that includes the tiles, trowel and glue! Armstrong VCT flooring, homedepot.ca.

Big-box store cabinetry was a great way to save money and still get the classic Shaker-style cabinets I wanted. To prevent the prefab units from looking, well, prefab, I stacked two cabinet units and a set of drawers at different depths to create the floor-to-ceiling pantry. Bumping the unit out from the countertop and adding a honed slab of Carrara marble makes it look like a custom-designed freestanding piece of furniture. Martha Stewart Ox Hill cabinets in Picket Fence, homedepot.ca.

Screw a $5 lazy Susan mechanism into a $3 piece of jigsaw-cut fibreboard and you’ve got a budget-savvy storage solution that’s custom fit to your cabinetry. Lazy Susan hardware, transom latches, leevalley.ca.

Warm metallic finishes have been making a comeback for a few years now, but they’ve only recently become widely available in kitchen hardware. Everything from the drawer pulls to the sink strainer is in a finish I call “gaspy gold,” so-named because everyone who sees it gasps. You know you’ve done something right when people are in awe of the object that catches the crud at the bottom of your sink. (And yes, you can mix brass, gold and copper with stainless steel. No one is going to yell at you.) Brass cup pulls, homedepot.ca.

The kitchen is a 1940s addition that, come winter, is a good 10°C cooler than the rest of the house. With the old ceramic tile ripped out, it was my opportunity to install heated flooring. I went with Warmly Yours, a series of thermostat-wired radiant heating mats that run underneath your floor tiles. I emailed the company my floor dimensions and was sent everything I needed to do the job myself. I love the Internet! Radiant floor heating, warmlyyours.com.

Sure, I could have bought a massive, ultra-high-end stainless-steel refrigerator with an ice machine and water dispenser, and hidden my cache of condiments neatly inside. But when I saw the True Residential Series glass-front fridge, my decision was made. It brings an industrial restaurant feel to the space, and, to be honest, I love that you can see the food inside. It’s always a bit of a mess, but it still looks good to me—something that might be down to good lighting. True Residential Series refrigerator, chrisstorefixtures.com. For more expert advice from Karen, check out the highs and lows of her kitchen renovation.