My friend Alli recently finished a whirlwind vacation in western Canada. She said that the highlight was having the opportunity to meet Felicia Lo of SweetGeorgia Yarns fame and check out the studio where she creates her sumptuous colour palettes. Enjoy!

First thing in the morning the day after my arrival in Vancouver my brother drove me downtown to 4th and Main streets and the location of Felicia Lo’s SweetGeorgia Yarns studio. And I was nervous! 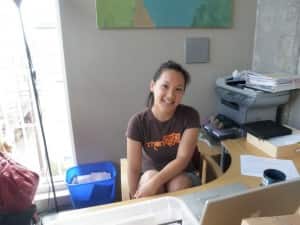 Of course there was no reason to be. Felicia was just as nice as I remembered (we met briefly last year at a trunk show at Toronto’s Lettuce Knit). She graciously opened her studio to me just days after returning from Sock Summit and a couple of weeks after getting married. 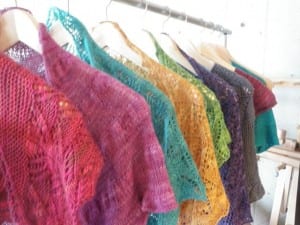 [/caption] If you’re a Canadian knitter or crocheter who likes bold colours but you don’t know SweetGeorgia Yarns – you should. Operating since 2005, SweetGeorgia Yarns has expanded their indie-dying operation from part time to full time, with an attitude as relentless as their colours. Felicia trained to be a pharmacist, but knew almost immediately that it wasn’t the right career path for her. She moved to a career in web design, where she honed her eye for colour and design and continued to explore fibre arts on the side. [caption id="attachment_6142" align="aligncenter" width="300" caption="Cultivated silk before dyeing."] 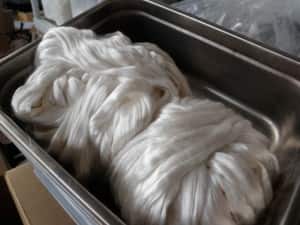 [/caption] Felicia finds inspiration for her colour choices in the bold colours that she and her friends like to wear. In fact, many of the colours are influenced by favourite wardrobe pieces from her past. Felicia says that her pharmacy background is what allows her to have an extremely scientific approach to her dying process, ensuring consistent colour results time and again. [caption id="attachment_6143" align="aligncenter" width="225" caption="Stock on display in the studio."] 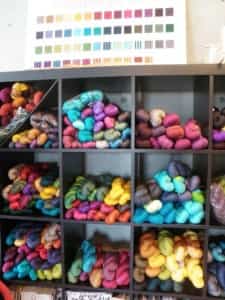 [/caption] After an explosive period of growth (she says she had no idea her business would take off so quickly once she started taking wholesale orders) and experimentation with dying different yarn and fibre bases, Felicia has refined her product offerings to those that showcase the vibrant colours the best. All of the SweetGeorgia yarns are protein based (except for some fibre, which has a blend of some bamboo) and have been selected for their ability to really soak up the colour and reflect the saturated quality that the SweetGeorgia label has become known for. [caption id="attachment_6144" align="aligncenter" width="300" caption="Yarn and fibre drying in the studio."] 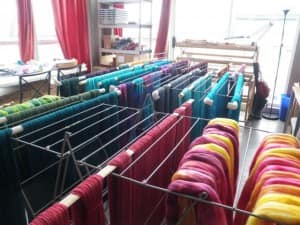 [/caption] With all these beautiful colours in their palette, Felicia says her plans for SweetGeorgia are to work on designing really beautiful and wonderful things to make with her yarns. If the designs are as beautiful as the colours, they’re sure to be a winning combination – I know I can’t wait!