As the leaves change colour and start to fall from the trees, what used to be the glistening of morning dew is now turning to frost.

The summer season has come to an end, which means it’s time to prepare your garden for the onset of colder weather. But what do you really have to do, and when? Here, we highlight the 10 most common mistakes people make when closing down their gardens.

Error One: Throwing Away Fallen Leaves 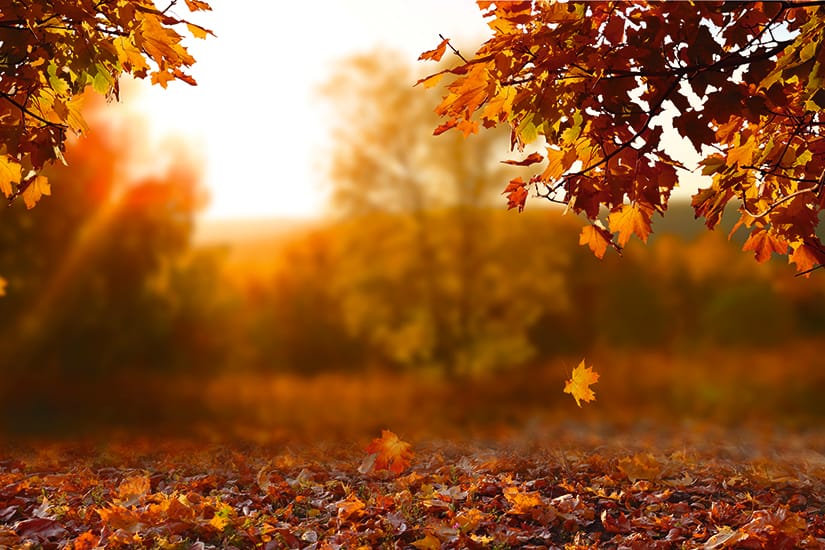 Mother Nature doesn’t allow leaves to fall from trees each year for no reason. It is part of her overall survival strategy. Dead leaves are so rich in minerals that they are sometimes called brown gold. They fertilize plants and protect them from winter damage. Why throw something so valuable away? If possible, shred them using a mulching mower (so they decompose better), then use them as mulch on flower beds and under shrubs and trees. Between 10 and 15 centimetres of rich mulch provides excellent protection for plants during the colder months. You can also collect the chopped leaves in plastic bags to use as mulch on your vegetable garden next summer.

Grass will keep on growing until the ground freezes, so, to begin, just keep up with your usual summer lawn care, and when grass reaches 10 centimetres in height, mow it down to about eight centimetres. Leaving the trimmings where they fall—a practice called grasscycling—is good for your lawn. As fallen leaves start to build-up on the lawn, remove them so the grass will continue to get the sun it needs. A mulching mower is particularly useful for this task because it chops up the leaves as it mows, allowing you to collect the shredded leaves in the mower’s grass catcher. Bonus: you can use these as mulch or simply put them in compost. If this autumn is exceptionally dry, don’t forget to water; you’ll want your lawn to reach winter in top shape, not stressed by drought. At about the time of the final mowing, fertilize with a slow-release lawn fertilizer. This will nourish the roots, which remain active much longer than the leaves, and promote deep rooting and better cold resistance. Also, a lawn fertilized in the fall will green up faster in the spring. Lastly, when it has finally stopped growing, which generally happens sometime between the end of October and the end of November, carry out one final mowing, this time cutting the lawn extra short, three to five centimetres in height, and pick up the clippings. The idea is to keep grass leaves short and upright during the winter, which will ensure better aeration and help prevent fungal diseases that tend to develop when long leaves lie flat on the ground under the snow. 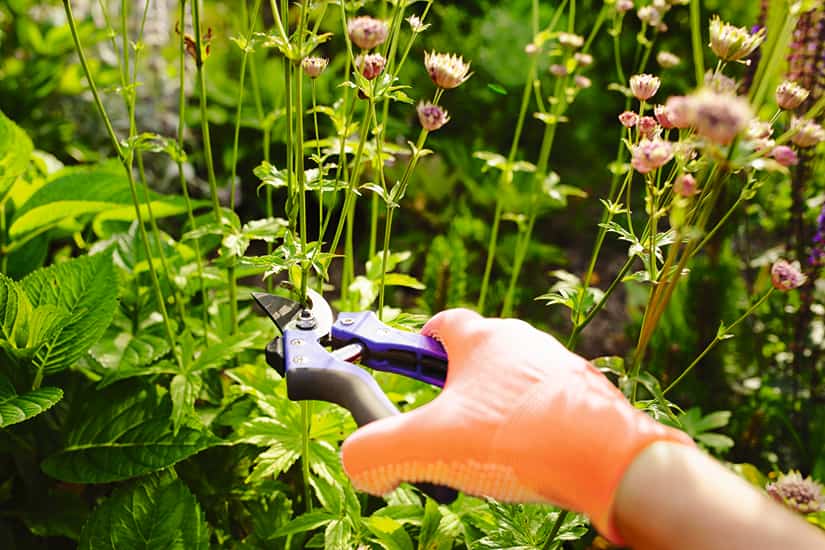 The belief that you should remove the leaves from your perennials in the fall, cutting the plant back to its base, is largely unfounded. Those leaves, although dead or dying, insulate perennials and protect them from the cold. You can also leave flower stalks standing, as they feed the birds and often harbour desirable insects. Not to mention that the best fertilizer for any plant is its own decomposing foliage! Keeping foliage through the fall is even more important for perennials with evergreen leaves (heucheras, bergenias, hellebores, etc.) as well as for ornamental grasses, whose fountain of leaves and plumes that remain standing all winter is visually important. Not “cleaning up” doesn’t necessarily result in more work in the spring, since most of these leaves will disappear on their own. Only ornamental grasses will need a serious spring shearing. 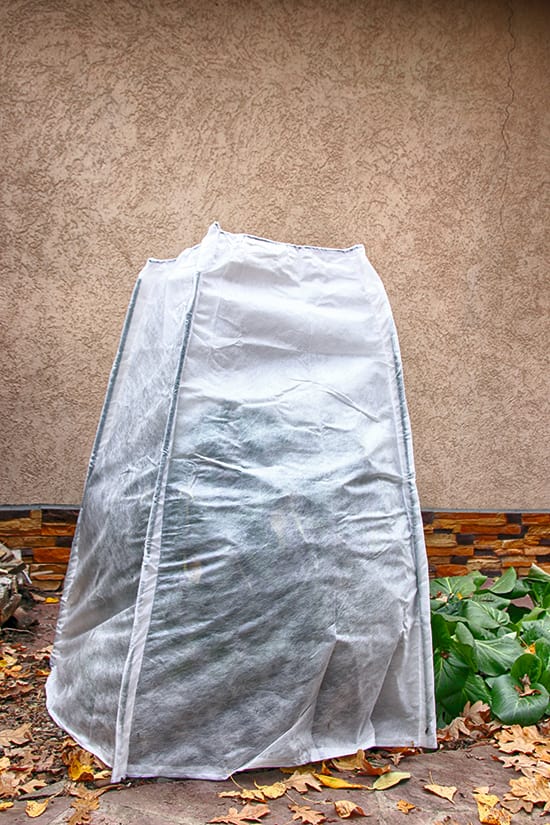 The first winter after you plant trees and shrubs, it’s always a good idea to cover them with wrap fabric or burlap to protect them from the worst of wintery weather, since they are not yet well-rooted and their exposed buds can dry out under the effect of cold winds. However, it’s important not to install such protections too early, or a lack of air circulation and overheating can harm the young plant. It’s best to wait until just before the first snowfall when the leaves have fallen and night temperatures drop below freezing (usually not before mid-November). Keep in mind: for most woody plants, this kind of protection is only important the first winter, though some shrubs from warmer climates are not as hardy and will need protection every year. In most parts of Canada, this is the case for buddleias, bigleaf hydrangeas, Japanese maples and hybrid tea and Grandiflora roses. Also, it’s always worthwhile placing a spiral tree guard around the trunks of young trees to protect them from voles; otherwise, they may cause serious damage by gnawing on the bark under the snow. 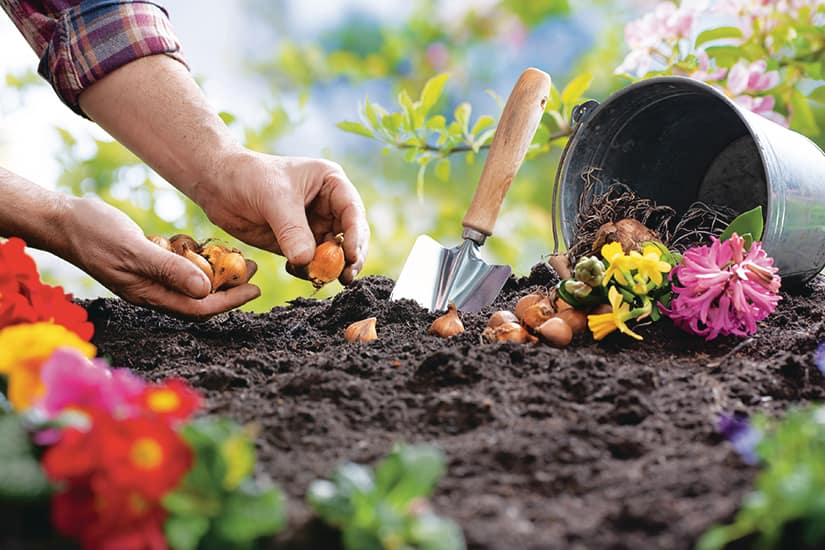 The first flowers of spring come from bulbs: tulips, daffodils, hyacinths, crocuses, etc. They give us an early wave of colour, often long before the other plants have even started sprouting. But, curious as it may seem, you must plant these spring bloomers in the fall. Between mid-September and the end of October is the time to plant your bulbs: space them at three times the diameter of the bulb and at a depth equal to three times its height. Do so in rich, well-drained soil and in a location that is sunny in spring (even if it’s shady come summer). Water well and cover with mulch to offer some protection against sudden changes in winter temperature. As soon as the snow melts, you’ll be enjoying the first flowers of the season! 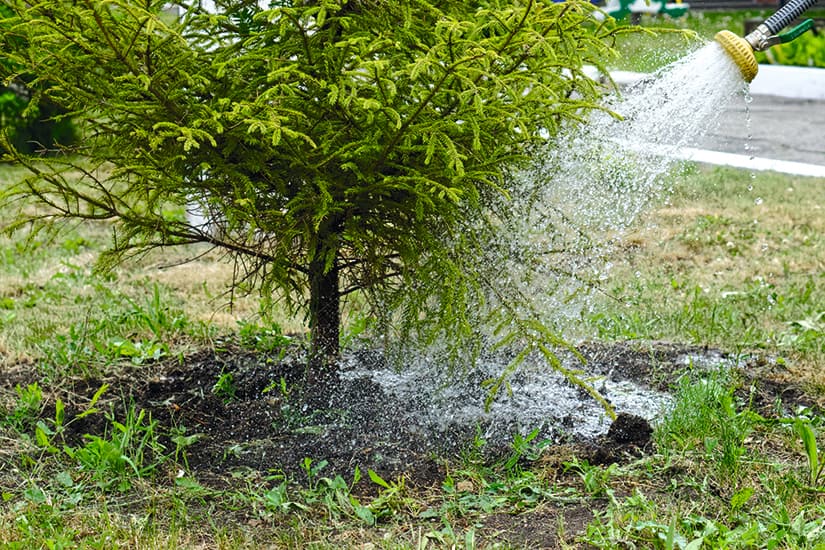 Conifers hold onto their needles all winter. (The larch is a rare exception that loses its needles in the fall.) That’s why we call them evergreens—the winter effect they offer in our gardens is stunning! However, for their needles to remain green all winter despite cold, dry winds, conifers need to be well-watered in the fall. It’s not so much a question of hardiness (most of the conifers we grow are very cold-resistant), but rather irrigation. You have to water them well in the fall, especially just before the ground freezes. This will help keep their needles from drying out and turning brown. As with all plants, it’s also wise to mulch the soil at their base, which will help to conserve water and prevent desiccation. 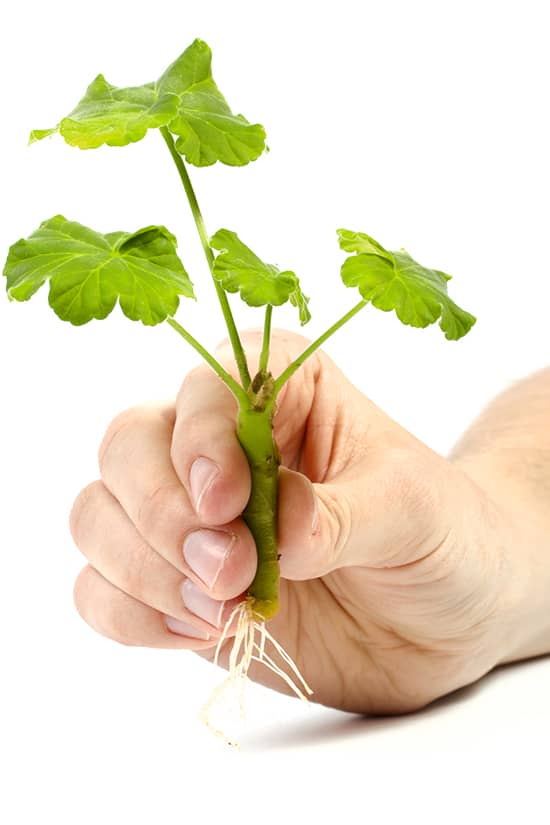 Annuals, as their name suggests, only live one year and so usually need to be replaced every spring...and that ends up becoming expensive. However, it is possible to keep some of them alive by bringing them indoors for the winter. Take cuttings in early fall, before the nights get too cold, harvest stems 10 to 15 centimetres long and swish them back and forth in a bowl of warm soapy water for a second or so to kill any insects that may be hiding on their stems. Then insert the stem into a pot of slightly moist potting soil and cover with a clear plastic dome or bag. Place the pot on a bright windowsill or under a plant light. After a month, remove the dome or bag and treat the now-rooted cutting like any houseplant. Many will even bloom during the winter! Which varieties should you keep? Begonias, coleus, impatiens, geraniums, fuchsias and petunias are just a few examples. However, there is no point in trying to conserve marigolds, cosmos and zinnias. These are “true annuals” and it isn’t possible to prolong their life. 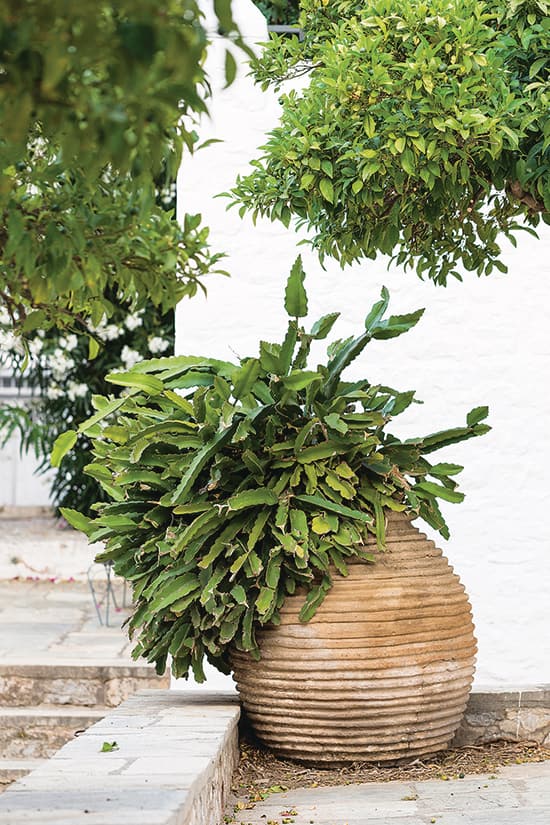 If the containers you grow your plants in have any value, you should probably store them over the winter months in a frost-free place such as the house, a heated garage or a covered veranda. If left outside, they may crack due to repeated freezing and thawing; doubly so if they are still filled with moist potting soil, as it expands considerably when it freezes. Terracotta and ceramic pots are the most fragile. Those made of plastic and wood can theoretically withstand cold, but a winter outdoors weakens them and shortens their lifespan. Concrete, metal, fibreglass and resin pots are the best choices if you’re looking for a pot you won’t have to bring indoors for the colder months.

Error Nine: Pruning shrubs and trees in the Fall 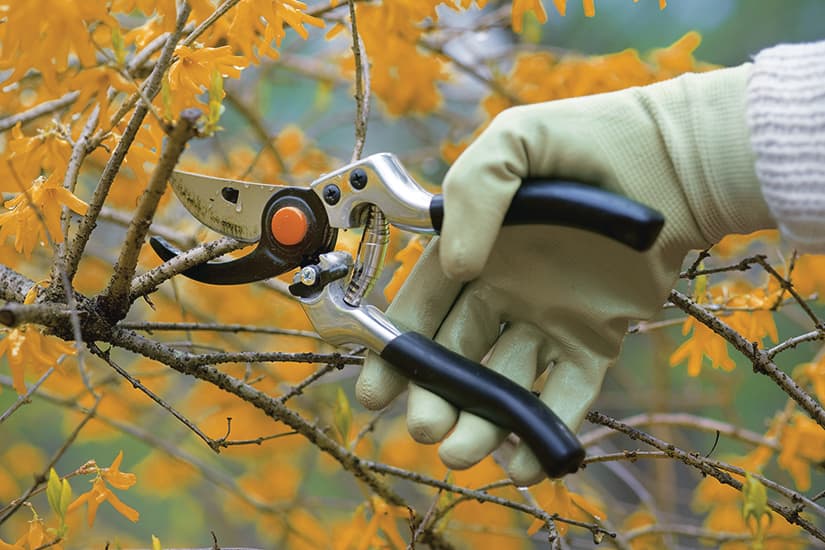 Come autumn, many spring-flowering shrubs and trees already bear the flower buds of the coming spring, some- times visibly so (as with magnolias, azaleas and rhododendrons), and sometimes inconspicuously on their branches (like lilacs, viburnums, crabapples, mock oranges, bridal- wreath spireas, weigelas, etc.). These kinds of plants bloom on “old wood,” that is from the stems produced the previous year. Pruning them in the fall will snip off most of the following spring’s blossoms. Instead, it’s better to prune them in spring, after they bloom. Even in the case of shrubs that bloom on new wood in the fall, such as PeeGee hydrangeas and seven son flower trees, or shrubs not grown for their flowers, spring pruning is still almost always best. In the fall, limit pruning to removing dead, damaged or diseased branches. 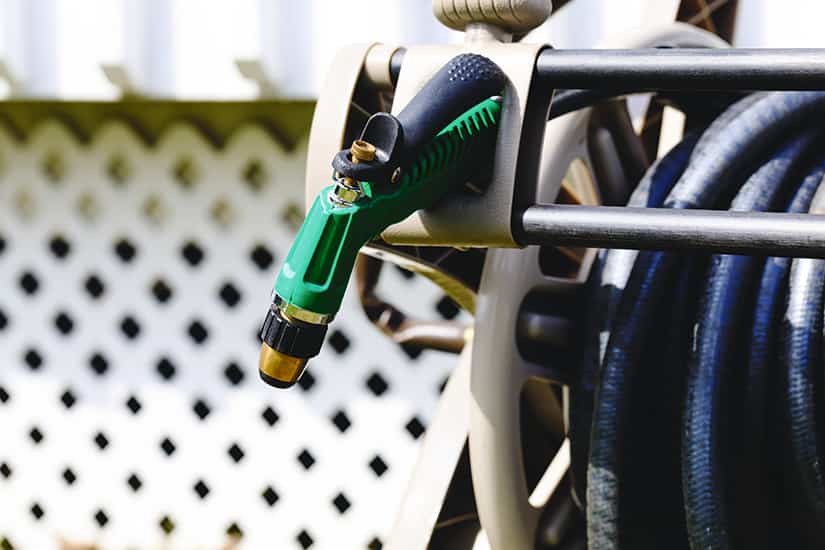 If water remains in irrigation pipes and garden hoses over the winter, it can do a lot of damage because when they freeze, the water expands and can cause them to crack or even burst. When nighttime temperatures drop to near freezing, make sure you shut off the water and drain all hoses. If possible, store them in a frost-free place for the winter. As for underground irrigation systems, an irrigation specialist can drain them for you using compressed air. If you decide to drain them yourself, make sure to follow the information in the buyer’s guide very carefully since every system is different.