Angela J. Cassie, VP of public affairs and programs at the Canadian Museum for Human Rights, shares why she chose Winnipeg to call home.

It was 1999 when the idea for a Winnipeg-based human rights museum began taking shape at the Federal Department of Canadian Heritage, where Angela Cassie worked. By the time a startup committee was formed to break ground almost a decade later, she was itching to throw herself into the most exciting project of her life: the development of a museum from scratch. "We had a blank slate," Angela says. "We had no collection, no structure. It was the first national museum to be established since 1967."

As part of a content advisory committee, Angela toured the country from Whitehorse to Charlottetown to ask Canadians about the human rights narratives that were most important to them. "It was a fascinating experience to hear unique, distinct stories, but often common themes," such as protecting rights in Canada, Indigenous perspectives and examining the Holocaust. During the tour, she also heard people claim that the museum should be in Toronto or Vancouver—a larger urban metropolis. "But there's a can-do attitude and tenacity in Manitoba," says Angela. "This museum happened in Winnipeg because the community rallied together to make it happen."

Though Angela could live anywhere, and has lived in Montreal, she makes her home in Winnipeg for this very reason. "To be part of a project and community taking a new place on the national and international scene, and to do it through a vehicle like human rights. For me, it's once in a lifetime." 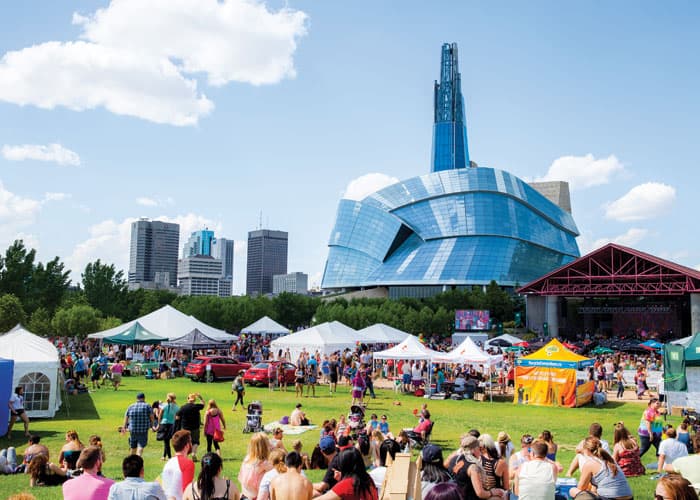 Angela's picks
"I can't eat gluten, so my favourite bakery, which now has a little restaurant, is Cocoabeans. They have the best salads and mac and cheese. Hermanos, an Argentine steak house, is the only place where my South American friends eat red meat that they haven't cooked themselves. Segovia serves Spanish tapas, and it's one of my all-time favourites."

For more great stories from Manitobans like Angela, visit our special guide: Our Manitoba.