Ordinary families are doing extraordinary things for communities at home and abroad. Let's give them a round of applause.

Wow! We can't believe it's been 13 years since Canadian Living partnered with We, the family of organizations that inspires and empowers children and adults alike to think beyond themselves and give back to local and global communities in need. What began as a simple award ceremony celebrating Canada's charitable change-makers is this year turning its entire focus to families. Both as a unit and individually, these moms, dads, kids and even grandparents have committed to making the world a better place. For others, they've sacrificed free time, spending money, family vacations and birthday presents—and for that, they deserve to be celebrated. Earlier this year, we called for nominations and shared the stories of the most extraordinarily selfless families online. Readers did the rest. After weeks of voting, you chose the winners of our very first We Families awards. Here, we tell their tales.

The Benko Family
We Are Canada Families Award 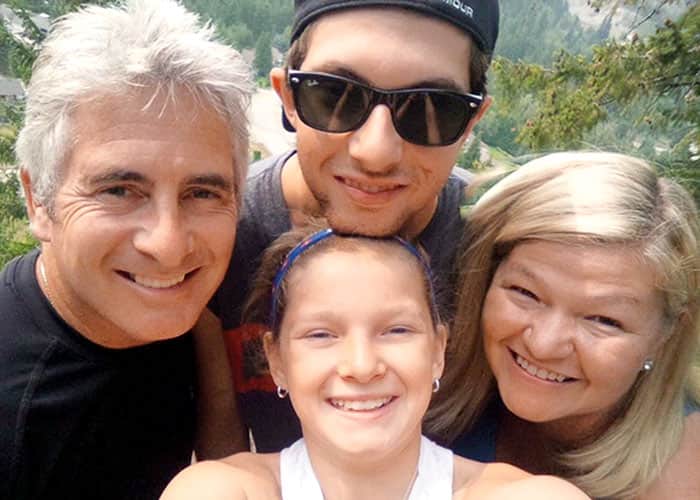 A family selfie from a hike in Shuswap, B.C. last summer.

Tim Benko and Shelly Appleton-Benko were married for a decade before their kids came along, and they spent a good chunk of their time in those early years of matrimony giving back to their community. Shelly's stint helping out at the United Way of the Lower Mainland in B.C. really made an impact. "I was inspired to see how, with small cash donations and volunteers willing to do a little extra work, a person's quality of life can be improved," she says.

Once her brood came along, Shelly continued volunteering, even with a baby on her hip and toddler in tow. Donating time and energy became a family project, always part of the kids' lives: "I've always worked full time, so finding a balance was sometimes the hardest part, but we always seemed to make it work," says Shelly. 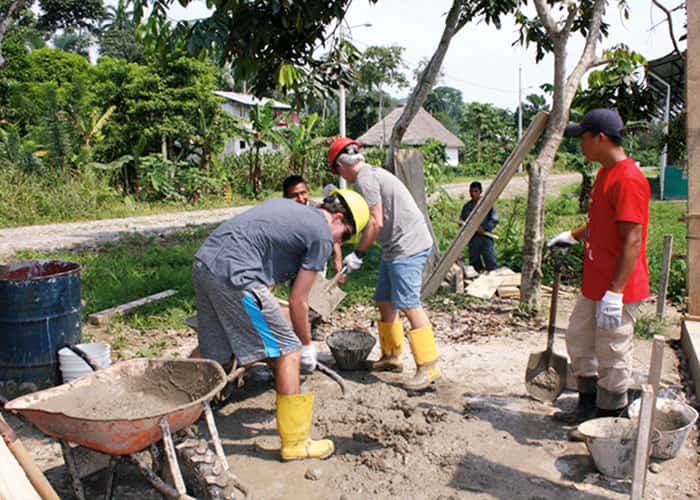 Tim and Morgan Benko building the foundation for a school expansion in Bellavista, Ecuador.

Today—with son, Morgan, 19, and daughter, Faith, 13, in their Cloverdale, B.C., home—giving back continues to be a family affair. And the kids are very much a part of deciding which causes to support. One year, for example, Morgan and Faith picked their school library to focus on. The school's existing library had been annexed as a classroom due to a rapidly growing student body, so Tim and Shelly organized a Book Lover's Ball that raised funds to build a loft library. "We created a comfy place where kids could relax and read," says Shelly.

They joined the We movement six years ago, when Shelly went to an economic summit in Surrey and heard We cofounder Craig Kielburger speak. So moved by his story, she convinced the rest of the family to take up the cause of raising money for developing countries. The troop has been involved in plenty of fundraisers since then, including the popular Benko Family Charity Golf Tour­nament, which has raised more than $35,000 since 2015. The first year, the proceeds paid for a classroom in Kenya, and in subsequent years, they helped fund a community garden in Los Rios and a kitchen in Bellavista, both in Ecuador. 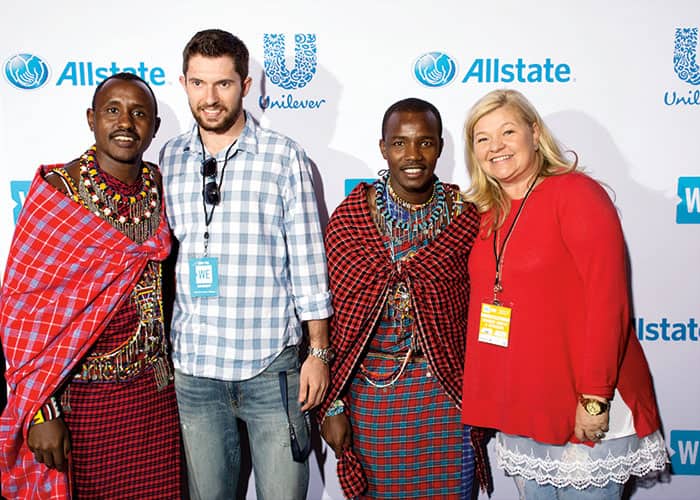 Morgan and Shelly Appleton-Benko at We Day in California this past spring, catching up with old friends, Maasai warriors Wilson and Jackson. | Photography by Howard Ingram

The family doesn't just volunteer from afar—they've travelled to Kenya and Ecuador to get their hands dirty, too. In anticipation of the trip to Kenya, the Benko kids ran small classroom fundraisers (such as a Friday popcorn sale) to buy $50 goats for families in the communities they would be visiting; when they returned home, Faith gave a slide-show presentation to her school about how the new goats had benefited the families they met. "Having participated at a local level, we were primed to help raise funds to build a classroom in Kenya so children there could enjoy learning in a better environment. Helping from home gave us the momentum to help abroad," says Shelly. "We feel pretty strongly that our kids should share the love wherever they can. Practising gratitude is never a bad thing."

The Morose Family
We Families at Home Award 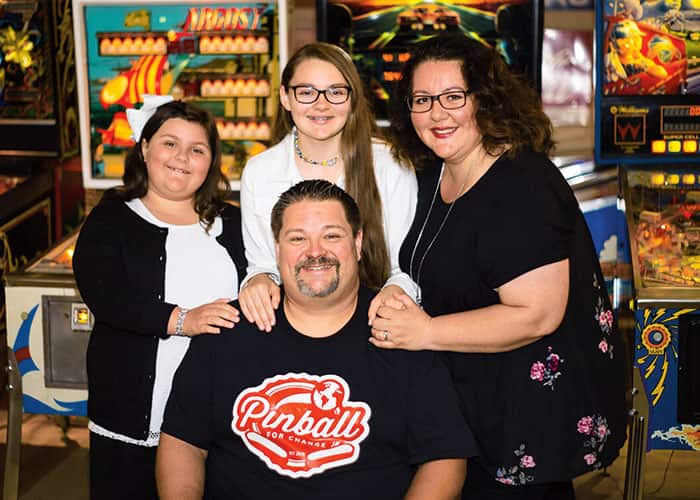 The family at a recent Pinball for Change fundraising event to benefit education in Ecuador with We. | Photography by Krissy Myers

Ask the Morose family what they're most passionate about and their answers will revolve around being charitable. They can thank mom Gabi for their giving spirit; for the past eight years, the Toronto-based teacher has been a We lead educator in the public school where she works. So it wasn't a surprise when, two years ago, Gabi, her husband, Walt, and their two daughters, Maya, 14, and Chloe, 9, became a We Family. "As our kids grew up and participated in We events at school, we began initiatives at home," Gabi says, adding that her family wants to demonstrate that small actions can lead to big changes.

Take Maya's 12th birthday. Instead of a gift-filled party with friends, she planned a pay-it-forward challenge. Guests were grouped into teams to complete 12 random acts of kindness throughout the community, including donating to the local food bank and taking cookies to a fire station. "Birthdays can be selfish," says Maya. "I wanted to show that even though I'm only one person, I can make an impact on the world."

Maya's little sister, Chloe, is also doing her part—for her last birthday, she collected pet supplies for the local animal shelter in lieu of presents. "It makes me sad that some animals live in shelters for years," says Chloe. "Collect-ing pet toys, blankets and food instead of getting gifts made for the best birthday."

Even the family's favourite hobby—pin-ball—has been turned into a charitable pastime. Pinball for Change—a series of tournaments to raise funds to build classrooms in Kanambu, Ecuador—has raised more than $15,000 since its beginning. "We often take for granted access to schooling," says Gabi, who wants her kids to take nothing for granted. "We've taught our children to think about others and work together to provide for people near and far."

The Quackenbush Family
We Families in the world Award 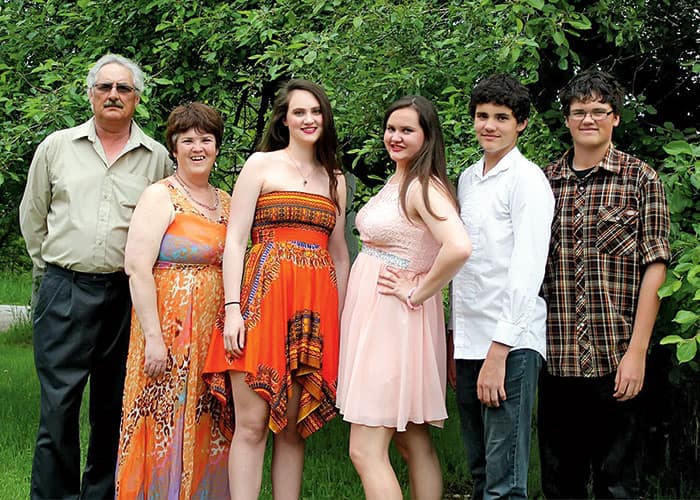 Ashley Quackenbush, 23, credits her grandparents with her family's commitment to volunteer work. Her 90-year-old maternal grandmother, Rae Kilgour, spends her days making pneumonia vests, hats and socks for kids overseas (her clothing keeps little ones in hot climates warm at night when temperatures drop), and she knits beautiful quilt blocks to make blankets for cancer patients. Ashley's paternal grandmother was also big on helping others back in her day—she had been heavily involved with her local 4-H Ontario, serving as one of the leaders at a local club.

"They showed us how important it is to give back to others, especially within our local community," says Ashley, adding that her parents instilled the importance of charity by taking their four kids to help at church dinners and community cleanups and to visit the elderly and those confined to their homes due to illness or disability.

When Manitowaning, Manitoulin Island, Ont.–based Ashley started high school in 2008, no one was surprised when she became involved in her school's volunteer SHARE (Students Helping All 'Round Everywhere) committee and Go Green club; it's also where she learned about Me to We. "My whole family got involved in helping out with events," she says. "As each of the Quackenbush children have gone through high school, we've stayed involved in the charity on our own time to help our community."

Since they started raising money for We Charity, the entire family—which also includes dad Tom, mom Betty Lou and siblings Chrystal, 21, Michael, 19, and Jason, 16—has participated in a slew of events. Among the highlights? Joining We Scare Hunger, for which they gathered nonperishable items for the food bank at Halloween, and Ashley's trips to Tanzania and Kenya to help with school-related building projects. Ashley says because of these trips—and the lack of community access to water she witnessed—she's currently raising awareness about water by giving short presentations in her community and fundraising to build water wells in Africa through small efforts like bake sales. "Not only does giving back make us feel good but it also helps us gain a new perspective, develop new skills, make social connections and grow as individuals," she adds. "We want to help others to find their passion to get involved."

How to make time for volunteering

3 inspiring stories of families making a difference in their communities