Toronto native Penny Oleksiak has stolen the spotlight at the Olympics with four—yes, four!—swimming medals, including Canada's first gold of 2016.

Penelope ‘Penny’ Oleksiak is the youngest member of Canada’s Olympic swimming squad, but before the Rio Games started she was probably the least known. All that changed when she earned four medals at Rio, a bronze for the 4x100 freestyle relay, a bronze for the 4s200 freestyle relay, a silver in the 100m butterfly race and a gold (Canada's first!) in the 100m freestyle after she and American swimmer Simone Manuel tied for first place. Here are five fast facts about this rising star.

1.  She was born on June 13, 2000. Penny was only 15 years old during the Olympic trials when she qualified for a spot on the Canadian Olympic Team, making her the youngest Canadian athlete in Rio. And that qualifying swim was a record breaker: her 56.99 100m butterfly was 0.28 seconds faster than the previous record, held by teammate Katerine Savard.

2. Penny didn’t start to swim until she was nine years old. And she learned in a neighbor’s pool! But when she told her parents how much she enjoyed it, they encouraged her to compete.

3. She wasn’t an immediate success. When she expressed interest in swimming, Penny’s parents took her to the Toronto Swim Club to enroll in their competitive program. She just had to swim two laps around the pool at the University of Toronto—but she couldn’t do it. She didn’t get into the Scarborough Swim Club, either. But she practiced for a year before trying again. And needless to say, this time she made it.

4. She comes from a family of athletes. Penny isn’t the only sporty person in her family. Both parents are athletes, big brother Jamie Oleksiak plays defence for the Dallas Stars and older sister Hayley is competitive rower at Northeastern University. Jamie took to Twitter this past weekend to let the world know how proud and happy he is for his little sister. 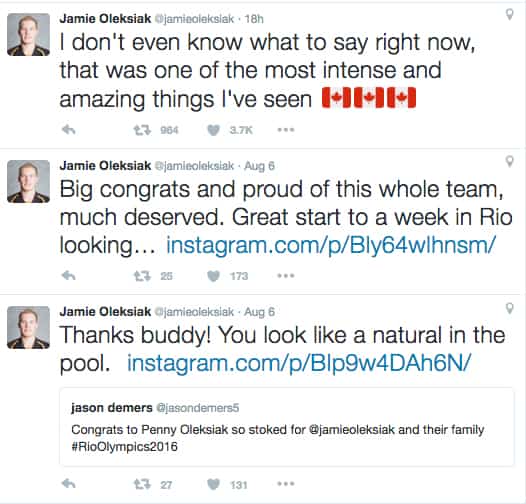 5. She could be one of Canada's best athletes. Thanks to her height—she’s six-foot-one!—and athleticism, Penny could become the best Canadian female swimmer of all time. And she's already breaking records—until she won gold on August 11, only one other Canadian female swimmer had taken the top spot: Anne Ottenbrite, who won at the 1984 games in Los Angeles.

5 things you need to know about Olympic athlete Penny Oleksiak