These four couples have kept their supper club tradition for more than 300 meals.

Food for the soul. The recipe is easy: Take four couples, add lots of laughter and give it some time—about 25 years. That's how long this remarkable dinner club from rural Saskatchewan has been sharing meals and making memories. The dishes "always turn out," says Lloyd Hunchak, adding that the evenings often stretch into the wee hours, and the bonds forged have withstood the test of time.

HOW THE GANG MET 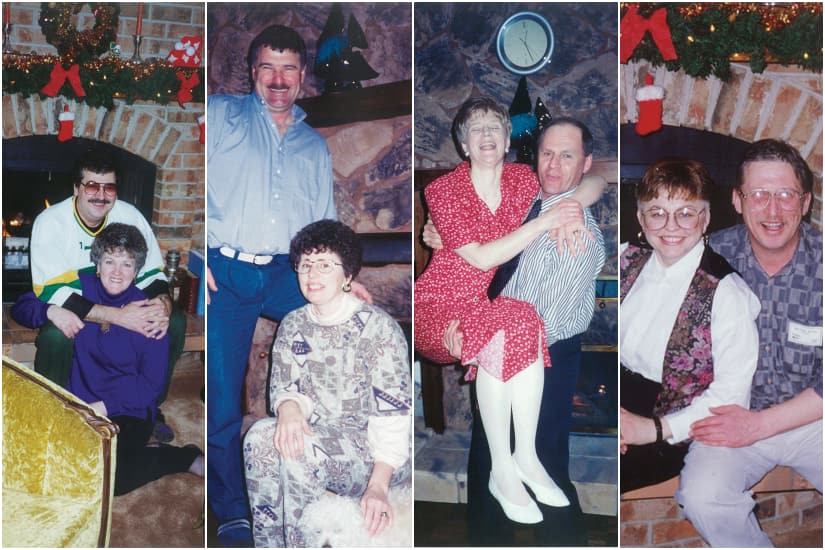 From left to right: Ed and Carol Thorsteinson, Gordie and Claire Melnyk, Vicky and Peter Krysak, Elaine and Lloyd Hunchak.

The couples, who grew up in the same area, cemented their friendship in the 1980s, when the men played in a twilight baseball league and the families travelled to tournaments around the province. In the '90s, Ed and Carol Thorsteinson realized, "We really like these people, but we don't connect often enough; we always see one another at some event," says Carol. They wondered if a dinner club would give the group a chance to visit more. So Carol asked Elaine Hunchak, and Elaine and Lloyd loved the idea. Then, she called Claire and Gordie Melnyk, who also accepted. The next day, Carol and Elaine walked over to the school where Vicky Krysak was teaching; Vicky and her hubby, Peter, didn't need convincing—they were in, too. The group of eight was soon meeting every month, rotating dinners at each couple's house with a fifth get-together as a meal out.

"Carol is a really good organizer, and she also loves to orchestrate fun," says Claire. It's often Carol and Ed who teach the others card games and coordinate goofy events, like a scavenger hunt around town or a sports tournament featuring games such as makeshift discus (a garbage-pail lid) and javelin (a wet mop).

"Once, when Lloyd shaved off the trademark moustache he'd worn forever, Ed and I made fake moustaches for everyone to wear when he arrived at the dinner party," says Carol. "Whenever it's our turn to host, no one knows what'll happen. We're always trying out new things—trivia, memory games, bingo bowling and Frisbee golf—on these poor people."

IT'S MORE THAN JUST A DINNER CLUB 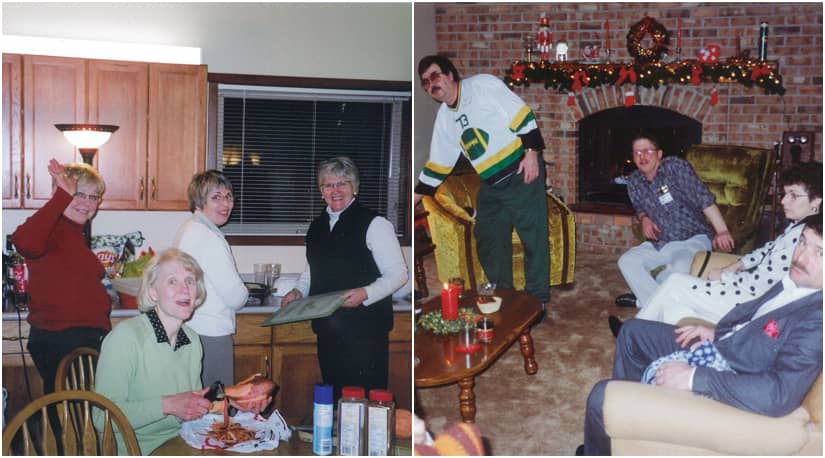 The gang at past dinner parties.

But the group relies on one another for more than just fun and games; they're there through life's ups and downs. When Vicky's mother passed away, the group rallied. "Family was arriving and I was overwhelmed with grief as well as arranging the funeral and having to feed our large clan," says Vicky. "There was a knock at our door and there stood our dinner-club friends with a complete meal for the whole family—all 19 of us!" They also worked quietly behind the scenes at the reception, setting up tables, adding centrepieces, helping serve the meal and cleaning up afterward . "I still get teary thinking about that very kind and thoughtful gesture," says Vicky. "It opened up my heart to remember to do the same for others."

Going around the table—they've gathered together to be interviewed for this story via Skype—each friend attests to his or her gratitude for the group, but pinpointing exactly what has made it last proves to be difficult to put into words. "We just always get along," says Lloyd. "I don't think there's a group like this anywhere else in the world." There's some modest dissent to Lloyd's comment, but he insists this octet is unique, and Claire agrees. "There are many groups that start a dinner club and fail," she says. "Somehow, we've not only continued but also been consistent!"

Elaine does admit that, sometimes, when the date for dinner rolls around, there's hesitation (especially when the temperature drops to -30°C). "But once we're together, they comfort me and make me laugh, and I walk away thinking, That's exactly what I needed. "

"We get really good discussions going, covering every and any topic," says Carol. "The group is so at ease that no one is afraid of rejection or reprimand for voicing an opinion—plus, we know that anything we say won't be shared outside the group."

"Over the years, I've compiled my own recipe book from asking people to photocopy the recipes I see in Canadian Living." —Carol Thorsteinson

THE FOOD IS KEY

And let's not forget the food. The host couple provides a meat dish, plus salad, bread, beverages and entertainment; another brings the vegetable side; someone brings the potato dish; and somebody, the dessert. And they're committed to always trying new recipes (we're happy to hear they've tried plenty from Canadian Living). "There's occasional repetition, but it's rare," says Claire. That's saying something, because if you do the math, these people have shared about 300 meals over 25 years, not including special events such as birthdays and weddings.

It's clear, though, that supper is secondary. Carol says that one reason she and Ed started the group was to ensure that life didn't just pass by; they wanted to spend it with people they enjoyed. That wisdom isn't lost on the others. "Laughter is good for the soul, and apparently for the heart," says Elaine. "It's a powerful medicine, and we do a lot of laughing." That sounds like the secret ingredient for not only a successful dinner group but also for friendship and a good life—not surprisingly, these friends are happy to share it. 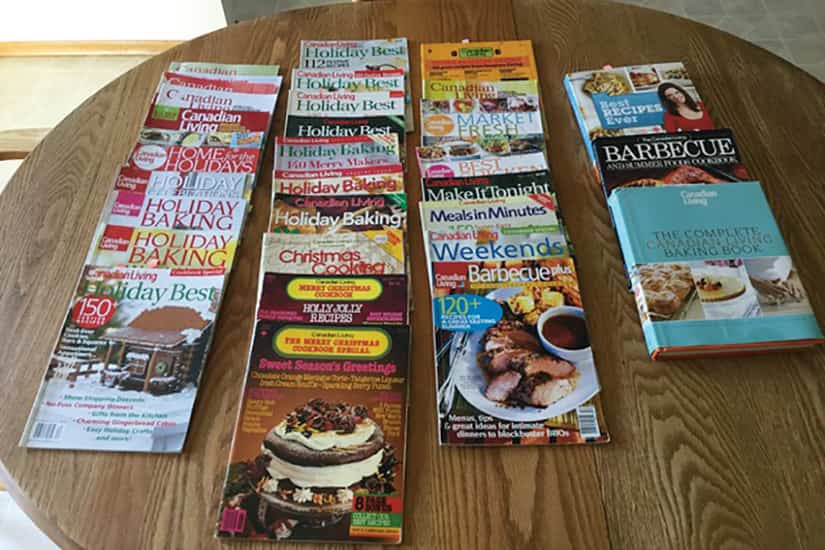 Vicky's collection of favourite Canadian Living magazines and cookbooks saved from her decade-plus as a devoted subscriber.

The Freebird Club is giving those aged 50+ wings to travel and the opportunity to meet new companions.

Four couples have kept up the sweetest tradition for 25 years