A family of six can feel like a crowded place. At any given moment, someone is liable to be touching your stuff, eating the last of the good cereal or using the bathroom when you need it. As the youngest of my siblings, I was always wedged between Mom and Dad on the bench seat at the front of the car—and if we ever had to give a lift to a friend or pick up family from the airport, I was relegated to someone's lap or the hump in front of the middle backseat.

Danielle Dudtschak can relate. "There are so many of us, you're never alone—which is great, but, sometimes, it can be awful," observes the recent high school grad and eldest of four kids in her family of six.

At least, that's how she felt before travelling to India's crowded Rajasthan region with her parents, twin brothers and younger sister last Christmas on a volunteer trip with Me to We, the Canadian organization affiliated with Free the Children. Me to We's mandate is to spark positive change, both at home and internationally, by shifting "me" thinking to "we" thinking. It was the Toronto family's first experience of Indian culture and first volunteer trip together. "In India," Danielle quips, "you're never alone—ever." Roughly one-third the square footage of Canada, India has 36 times our population. The Dudtschaks watched in worried awe as motorcycles zoomed past carrying four or even five passengers apiece. Even the cows became too numerous for them to count.

The culture shock was exactly what they had hoped for.

Like other families who sign up for volunteer trips with Me to We, the Dudtschaks were looking for more than a vacation. Says Danielle's father, Kirk: "My wife, Rosemary, and I knew we were fortunate as a family, and always talked about doing something that helped the kids see the broader world—both to appreciate how blessed they are and to cause them to want to make the world a better place."

Typically, the cost of the nine-day trip starts at $3,200 per person, not including airfare from Canada to Delhi (or to a destination in Kenya or Ecuador). It's certainly not in everyone's budget, but families can fundraise to pay their passage.

The Dudtschaks' nine-day trip gave them the opportunity to see the India of their pop-culture references, including a guided tour of the spice market in Delhi that made them feel like they'd jumped into a scene from Raiders of the Lost Ark, as well as up-close encounters with the people and problems of rural Rajasthan. Kirk recalls visiting Kalthana Primary School: "As we went marching in, I was watching a woman washing her clothes on the stone by the pond, and an ox turn the waterwheel, bringing up water from the hand-dug well. Then, my little buddy from the school grabbed my hand and walked with us up to the schoolyard. For me, up until that point of our trip, it had been as if we were experiencing the culture through the windshield of a car."

It was in the schoolyard that my 13-year-old daughter, Bronwyn, and I first really met the Dudtschaks. (We'd officially met at breakfast in Delhi the day before, but we were pretty jet-lagged after travelling first on an overnight flight from Toronto to Zurich, where we spent six hours on a stopover, then catching another plane from Zurich to Delhi and, finally, crashing in bed at 3 a.m. local time.) The trip facilitators had given us little Hindi phrase books, but, face-to-face with the schoolkids we'd each been paired with, the foreign words flew out of our heads. No matter: Most of the kids knew a few words of English, and we relied on pantomime to communicate the rest. "Phone!" was a popular request, and we marvelled at the ease with which these kids could navigate our iPhones and Samsungs. "Games?" asked my little friend, a girl with cropped hair held back by a barrette. No games on my phone. The best substitute I could offer was the notes app and my emojis. "I don't have any games, either," said a boy who turned out to be Danielle's brother Justin. "But I just showed my buddy the calculator, and it's blowing his mind!"

The community requires a well-equipped senior school for kids to move on to, and helping rebuild and refurbish the existing Verdara High School was one of our tasks. The dozen or so families on the trip divided into groups by task: Bronwyn went off to paint murals in one of the finished buildings, while I decided I was better suited to laying bricks and hauling "masala"—the local term for mortar, because it's a mix, or "masala," of cement, sand and water. It was dusty, sweaty work but also satisfying to see our progress day by day.

As we became more familiar with our surroundings and the work that needed to be done in the community, our Me to We facilitators offered us other activity options—Bollywood dance lessons, an Indian cooking class—but many of us, including the Dudtschaks, kept returning to the school construction site. Looking back, Kirk says that choice is what makes him most proud. "Of all the things we could have done, the kids wanted to continue to go back to the school because they were getting such a sense of accomplishment from building the wall."

Kirk and his family are already talking about their next volunteer trip. As he puts it, "If you want an experience that will bring your family together, help you realize how blessed and fortunate you are and help you feel like you can make a difference in other people's lives—and come back feeling all that much more blessed and fortunate—it's pretty incredible. 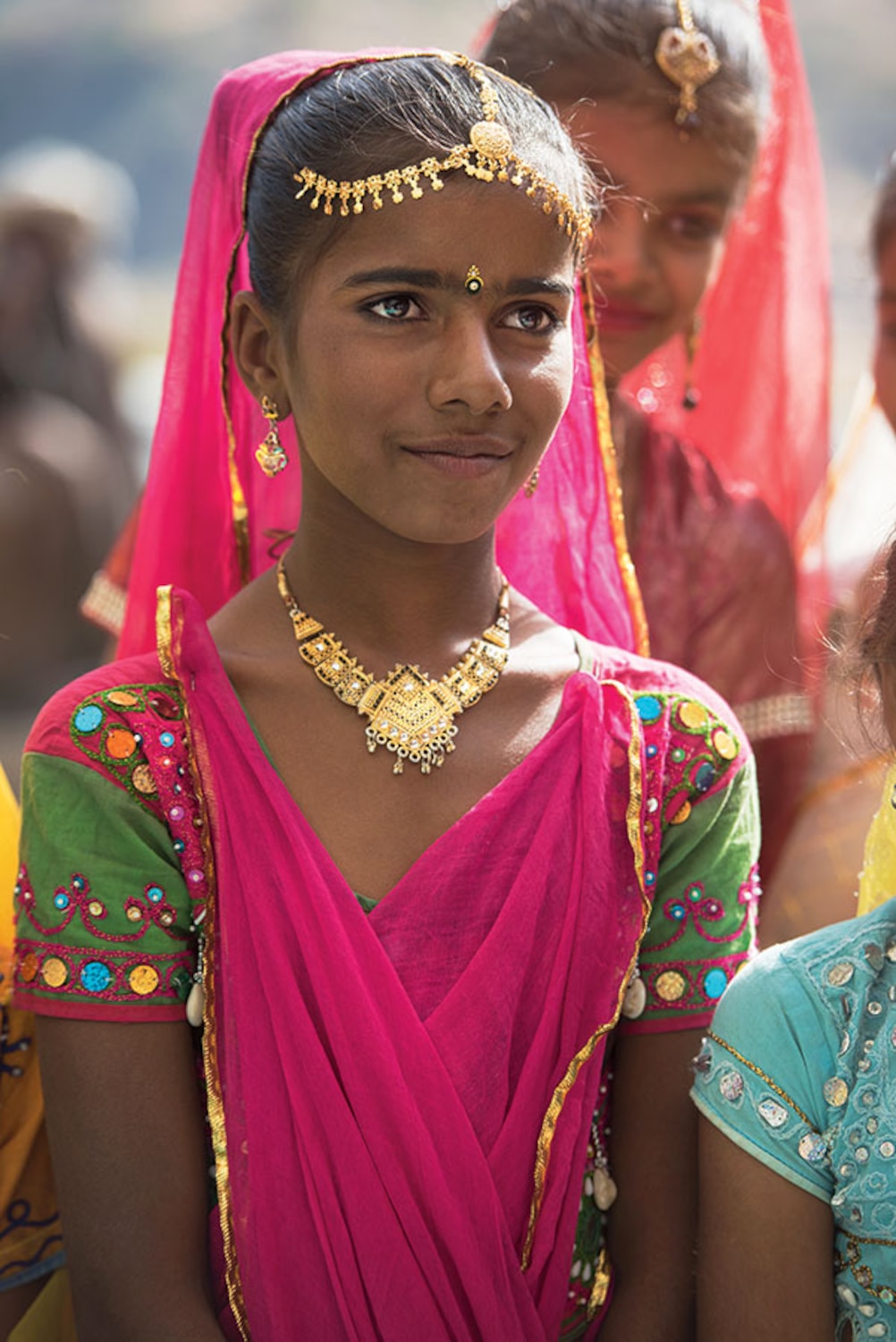 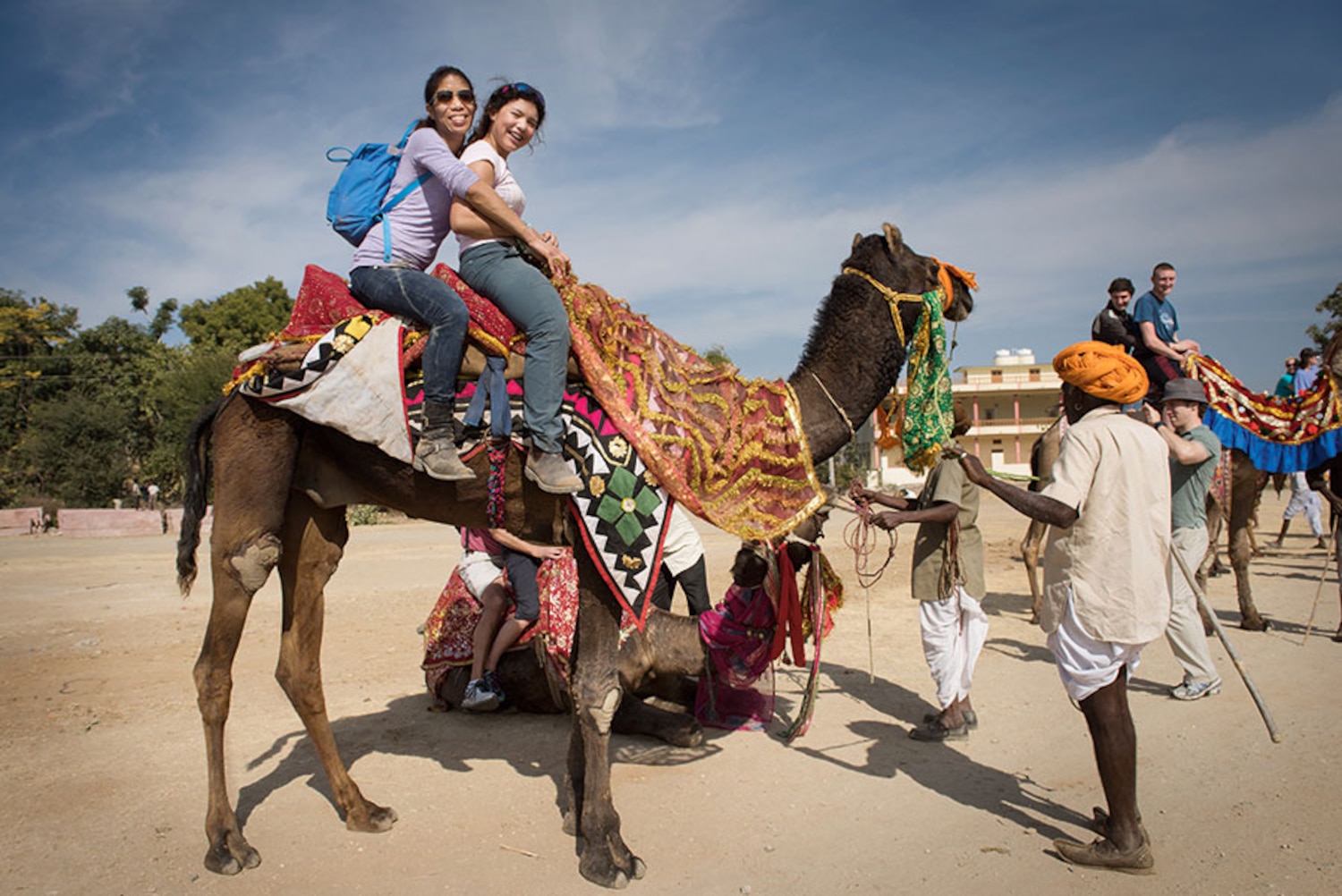 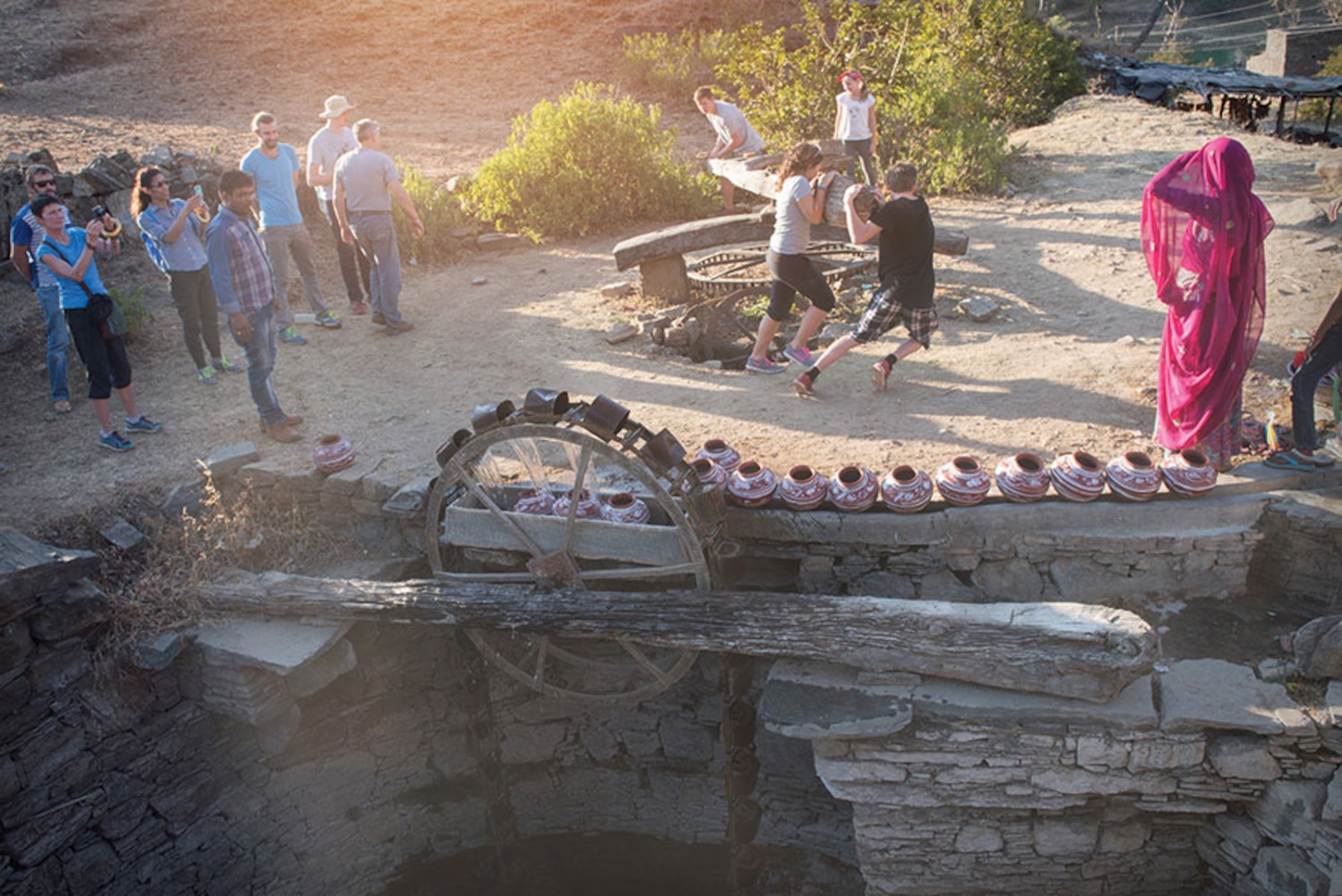 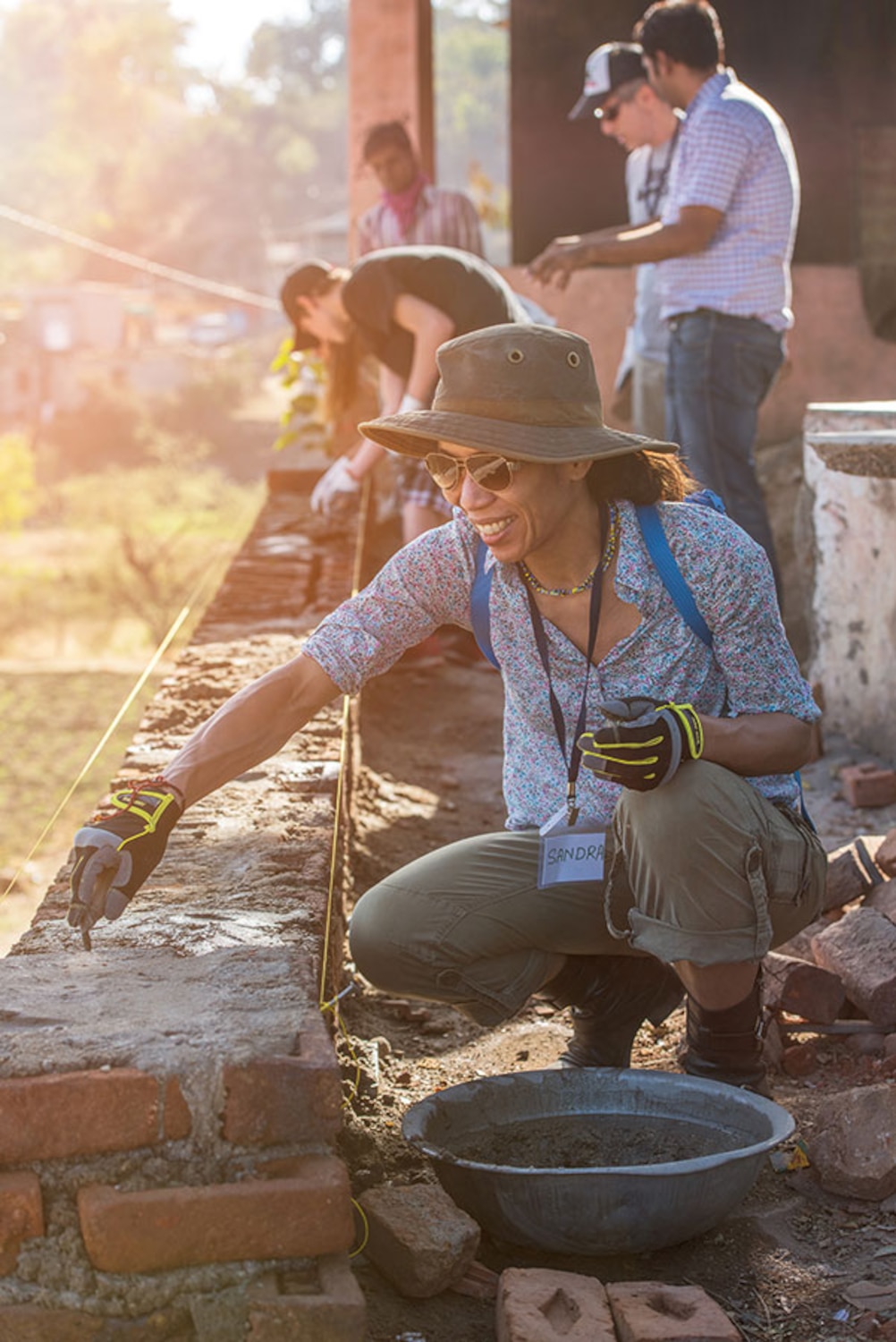 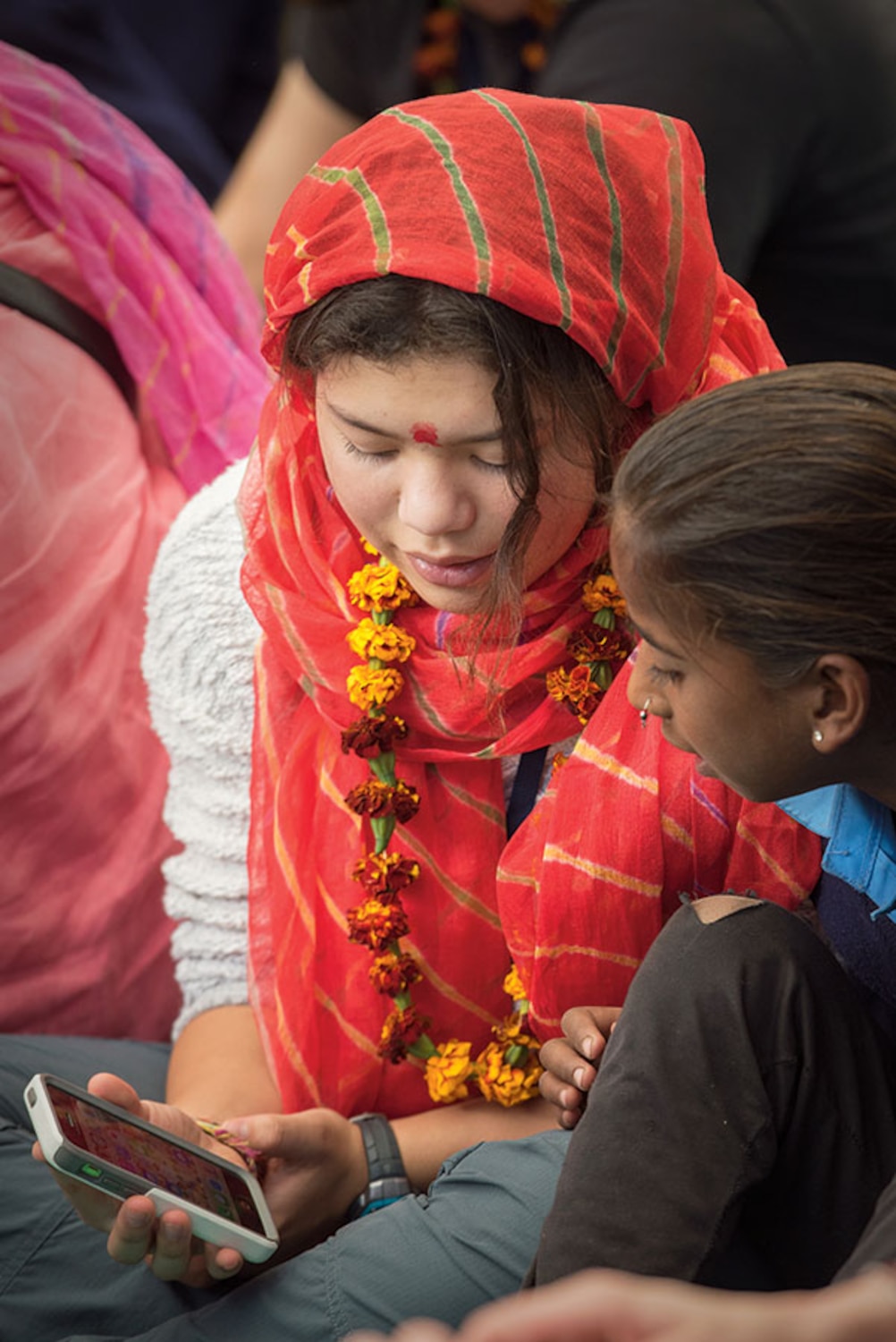 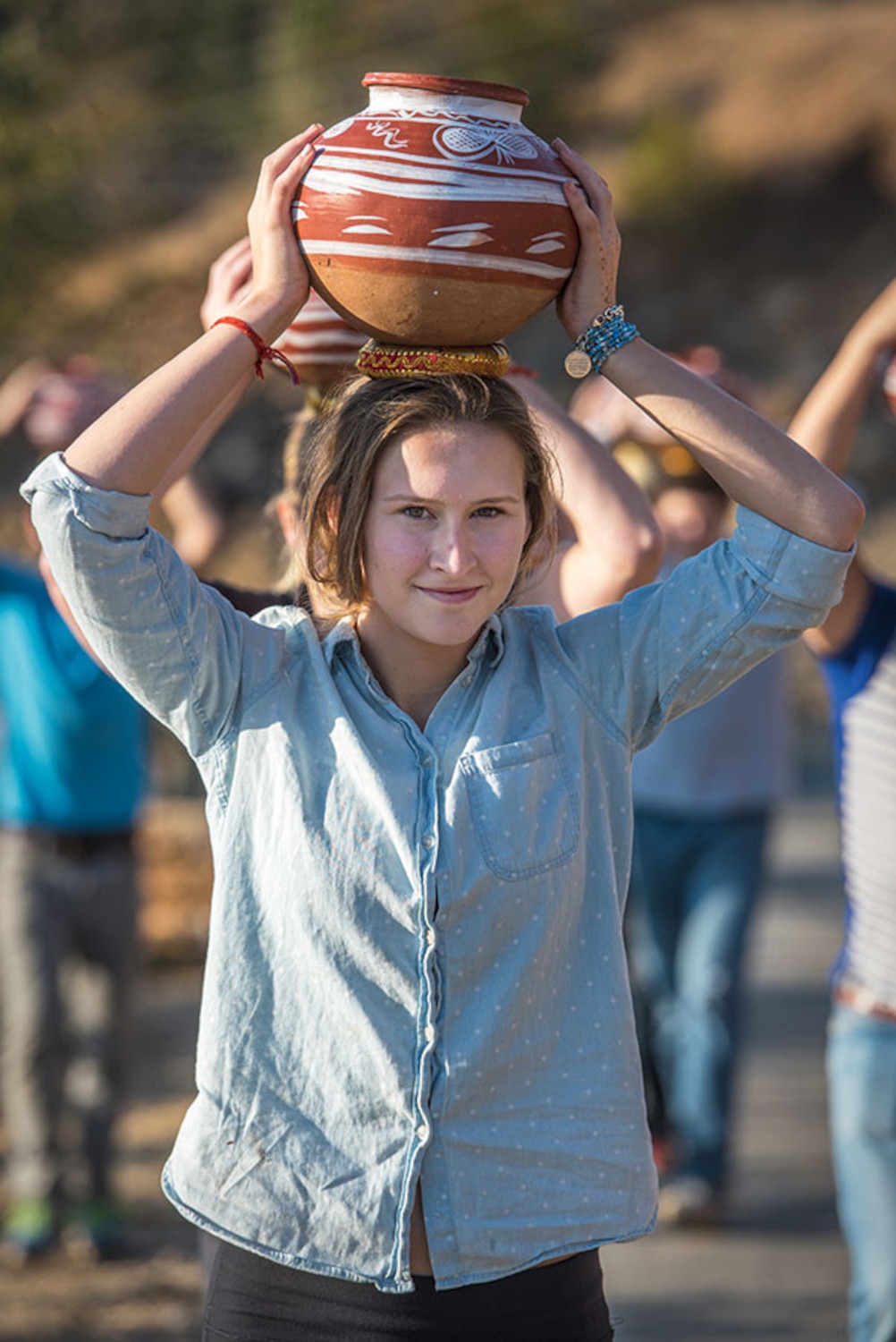 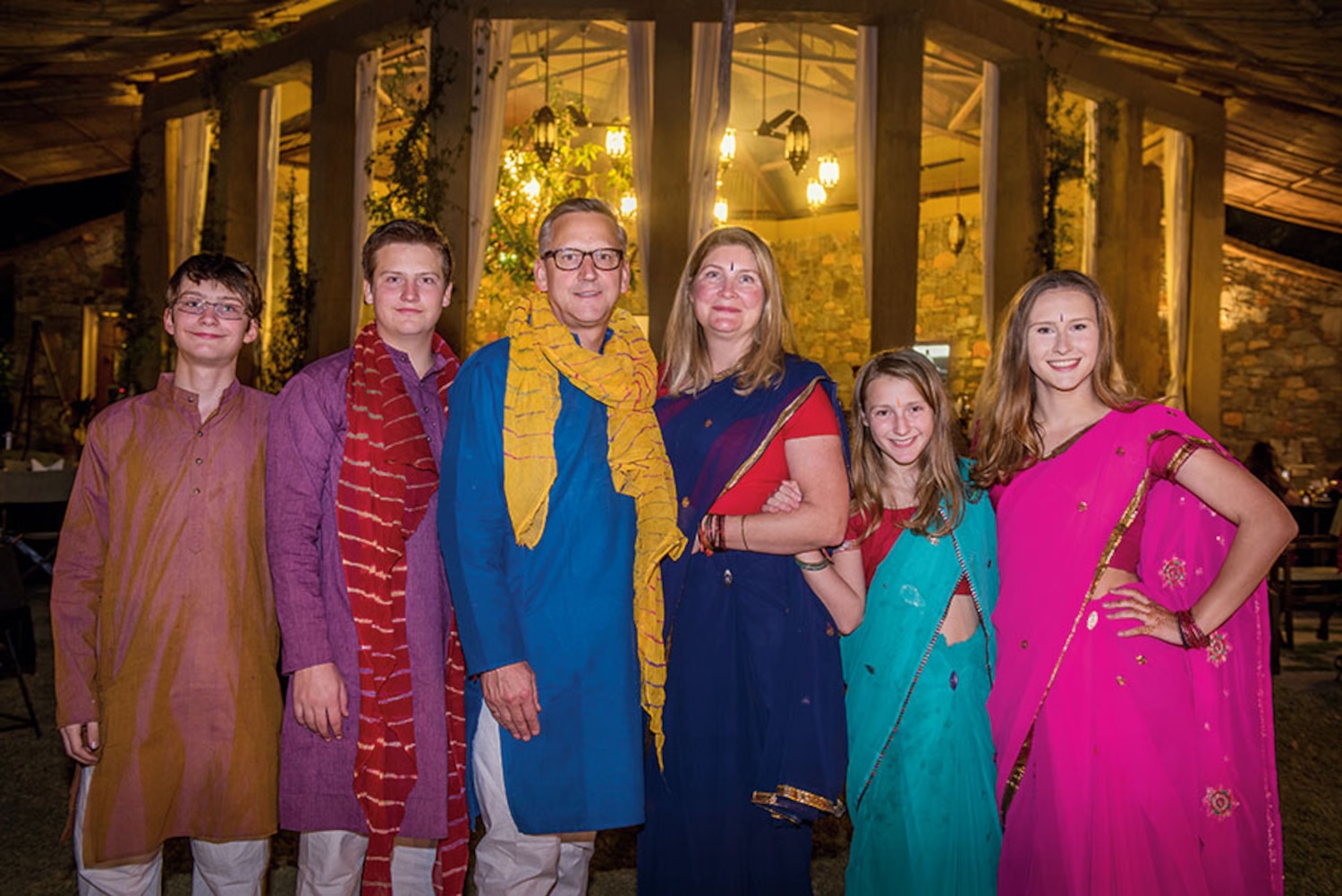 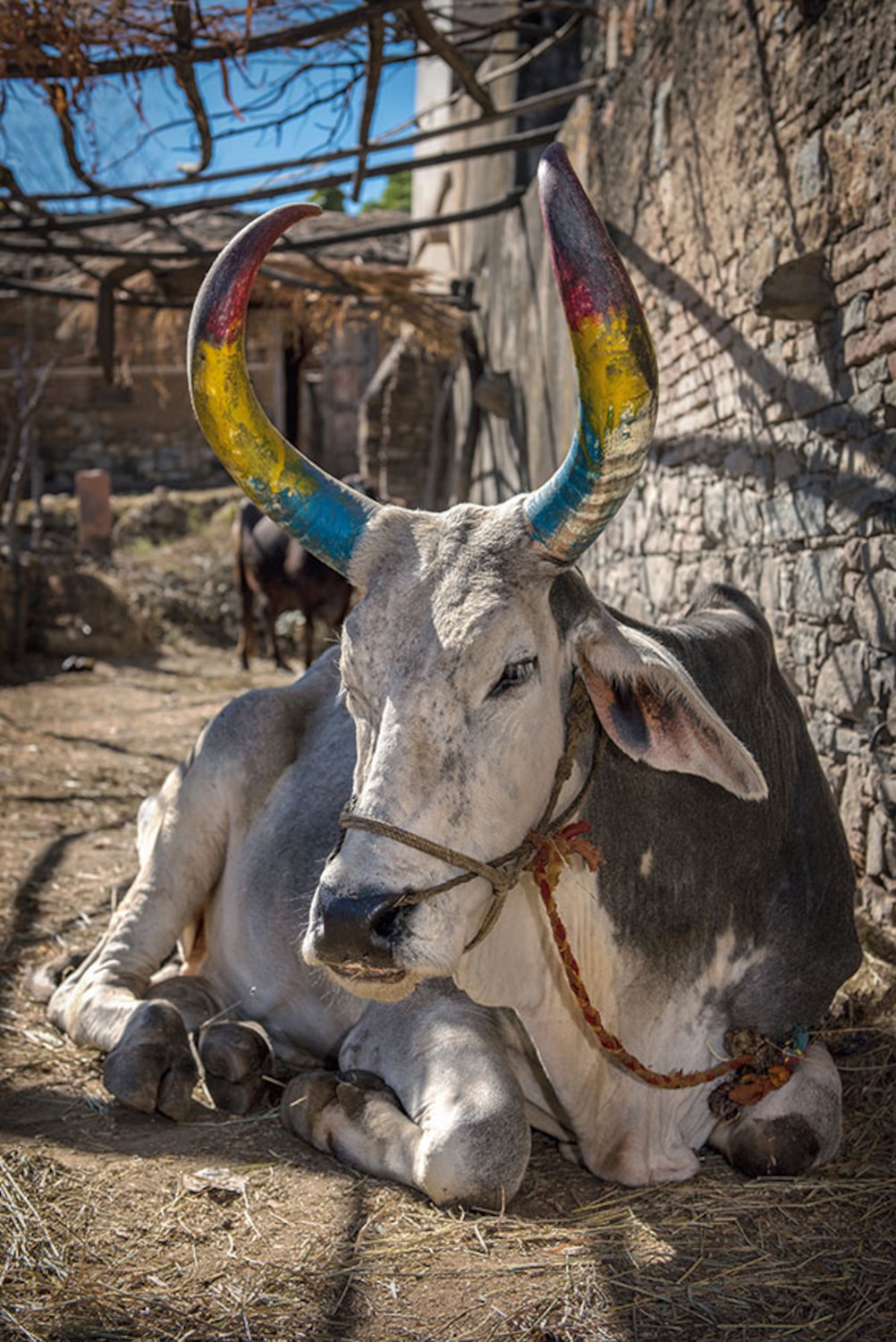 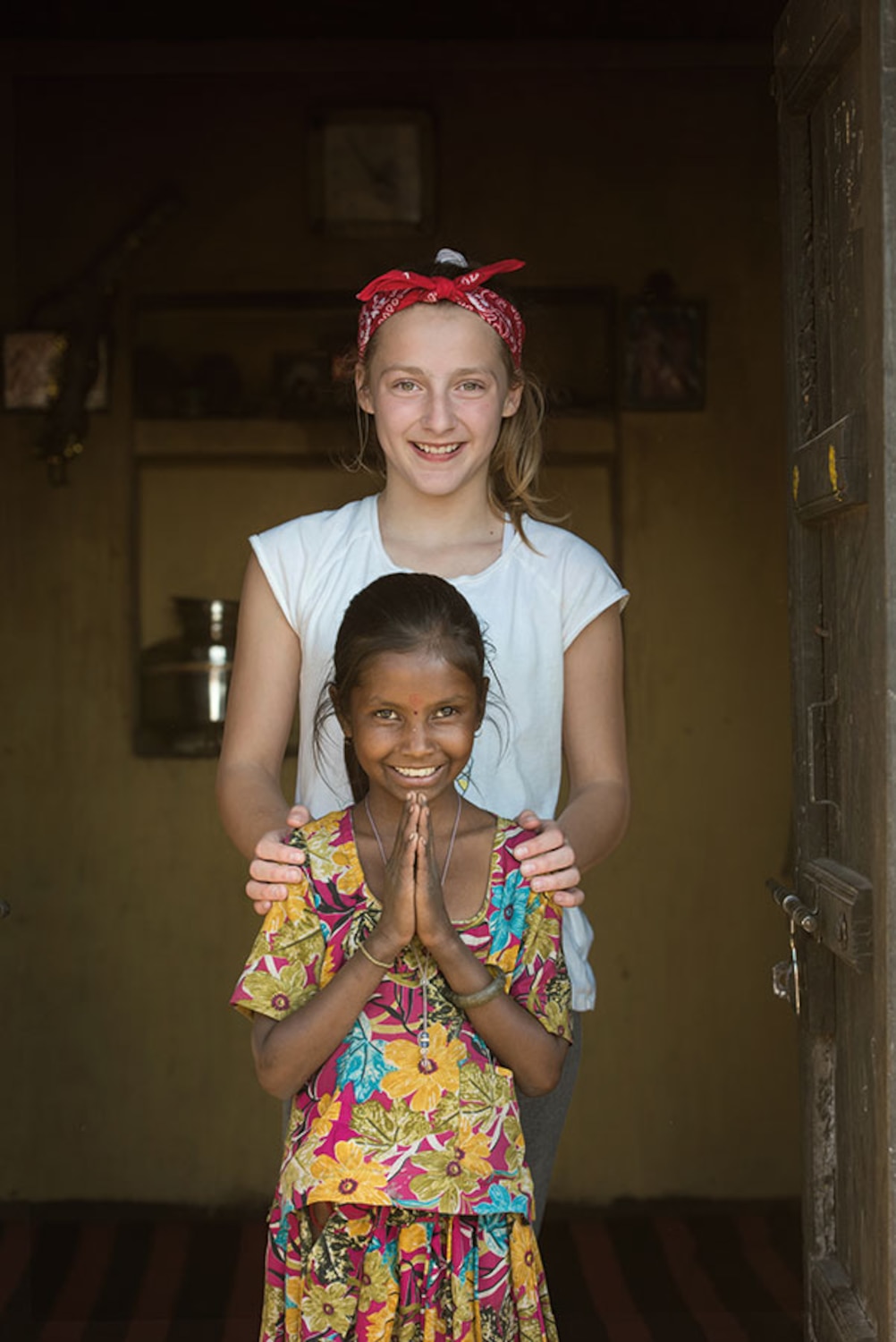 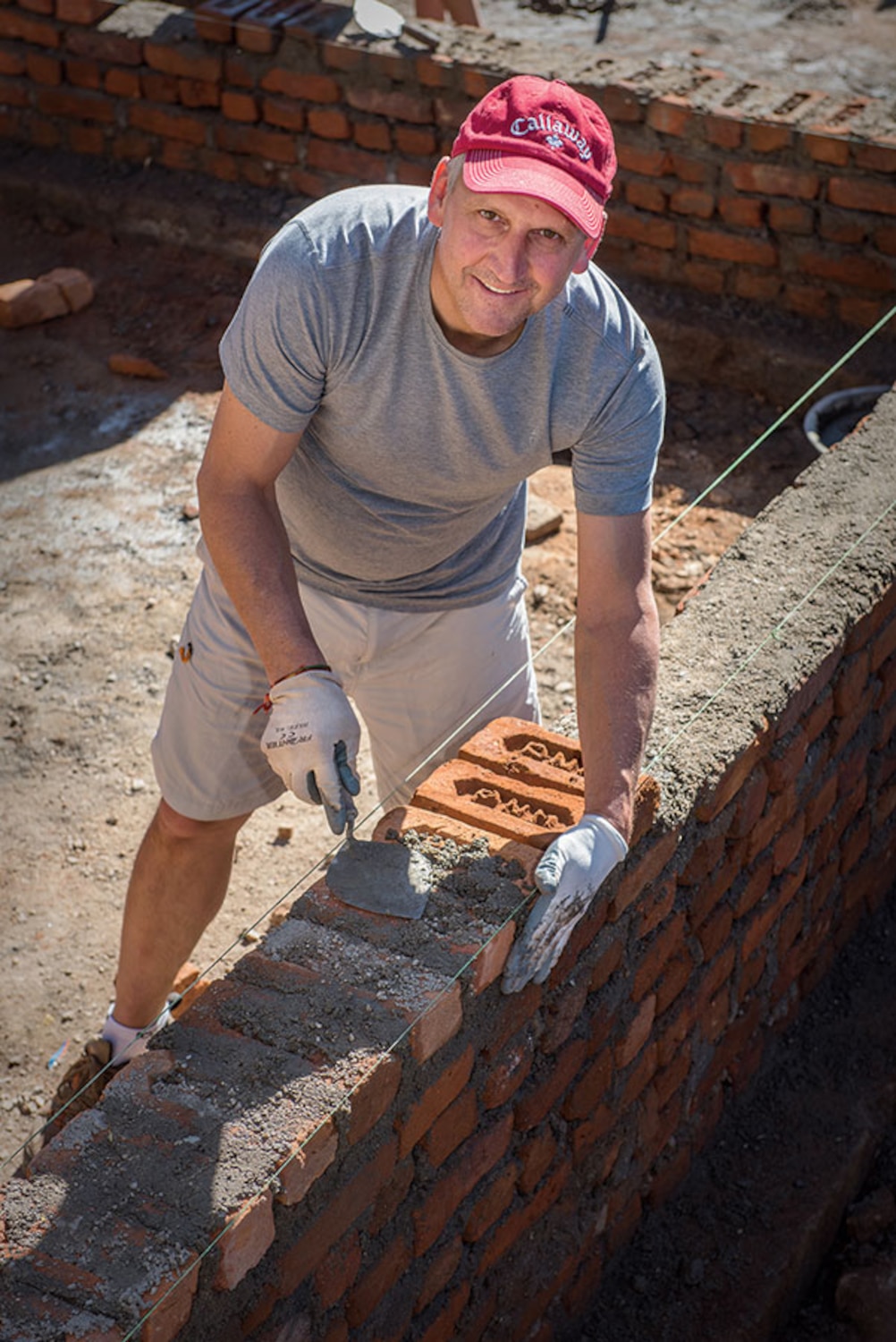 Local girls dressed in traditional garb to perform for the Me to We group visiting Kalthana Primary School in Rajasthan.

The author and her daughter Bronwyn join the group on a surprise camel ride.

Kids in the Me to We group try their hand—literally—at turning a waterwheel in the village.

The author lays bricks at a school construction site.

The local schoolkids are fascinated with visitors' phones.

Danielle Dudtschak follows the steps of the "water walk," which village women take up to 10 times a day, to fetch water from a central well.

The Dudtschaks (Simon, Justin, Kirk, Rosemary, Nicole and Danielle) ring in the new year dressed in Indian dhotis (for the guys) and saris.

Cattle are numerous (and sometimes adorned) in rural Rajasthan.

Nicole Dudtschak is reunited with her primary school buddy as the Me to We group visits the villagers where they live.

"Of all the things we could have done, the kids wanted to go back to the school because they were getting such a sense of accomplishment from building the wall," says Kirk, looking back.

Read more:
How to make time for volunteering
4 ways you can help Syrian refugees