One year has passed since a wildfire devastated Fort McMurray, Alta., and the entire Regional Municipality of Wood Buffalo. The community is still struggling to rebuild—but there are glimmers of hope, too.

More than 20 years ago, Beata Sharangabu fled the Rwandan genocide. "I experienced the killing, the violence," she says. Leaving her home behind, Beata migrated as a refugee to Canada, settling in Toronto and building a life there.

By 2012, Beata had planted roots in the big city—she was living downtown, attending a church she liked and forging a community. Yet, she yearned for something new. Some of her friends had relocated to Fort McMurray, and they encouraged her to apply for jobs in the Alberta boomtown alongside them. "I came to visit," she says, "and I didn't like it at first." Still, she looked for work; like many Canadians who had moved to the city in the past decade, she saw a chance for more opportunity—and better pay. Eventually, she was hired as a support worker for the Salvation Army's START Program, which provides services to people with developmental disabilities. "When I got a job and started working and getting used to the place, I ended up liking it more than the big city because it is so family-oriented," she says.

Hers is not a unique sentiment: Fort McMurray's reputation precedes it, in ways good and bad; for all the stories of economic success, there is also a perception—unfounded, according to a 2011 community-sponsored study—that the city has higher-than-average rates of crime and homelessness. That's why visitors are often shocked at how friendly and multicultural this infamous town can be.

It didn't take long for Beata to establish herself in the community: She found a network of families (she has two young sons, seven-year-old Moses and three-year-old Pius; her three daughters still live in Rwanda, though she hopes to bring them to Canada soon), a place to worship and feel welcomed, and opportunities to meet new people. She enjoyed the bustle of moving between her small apartment and her busy workplace. "I liked every part of it," she says.

For two days, a powerful wildfire dubbed "the Beast" had been sweeping north toward Fort McMurray. The previous evening, it had doubled in size, but by that morning, a temperature inversion—when air at a higher altitude becomes hotter than that at a lower elevation—was trapping smoke close to the ground, and some residents, many used to seasonal fires, wondered if the worst was over. In fact, it was about to get much more serious. By 2 p.m., the inversion had lifted and smoke once again billowed.

That's when Beata's supervisor sent her home so she could pick up her kids from day care. By this point, it had become apparent that the situation was dire. The entire community was being evacuated; the highways out of the area, both north and south, were clogged with traffic and all the nearby gas stations had lineups that stretched for kilometres. With her sons in the car, Beata planned to head south toward Edmonton, but when she heard the fire had jumped Highway 63 to the south, she merged onto its northbound lanes instead. As soon as they were out of danger, she pulled to the side of the road so they could get some rest—and not go any farther out of their way. The next morning, when the roads were clear, she and the boys were able to reach the safety of Edmonton.

The aftermath
For close to two months, Beata and her sons lived in an Edmonton hotel; most of her friends and relatives reside in Quebec and Ontario, so the family had nowhere to stay outside of what the Red Cross and the province could supply. But luckily, their apartment had not been destroyed. Beata was back in Fort McMurray, and at work, by June 23. From the outside, her loss was minimal. 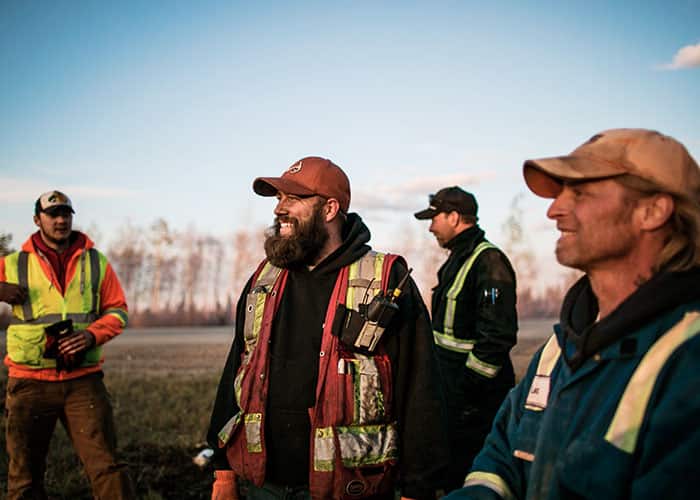 Support crew members take a short break a week after the evacuation. The fire wouldn't be declared under control for another two months. Image: Getty

That's not to say she escaped the worst, though. "It was bad," she says. "I had moved on [from the genocide], but after we came back from the fire, I started having nightmares about what happened 20 years ago. All those memories returned."

She was also dealing with a loss of hope. In 2014, Beata had been chosen as a partner family for Fort McMurray's newest Habitat for Humanity Wood Buffalo home. Before the fire, her lot in the Waterways neighbourhood had been staked out for foundation. Construction materials were supposed to start arriving in late May. But Waterways was one of the hardest-hit areas—it's estimated that 90 percent of the homes in the neighbourhood were destroyed. The fire also caused environmental damage, which meant there was no access to Waterways and other badly damaged neighbourhoods, such as Abasand and Beacon Hill. (These areas wouldn't reopen until late September.) So, on her return to Fort McMurray, Beata had no idea what was to become of the home. 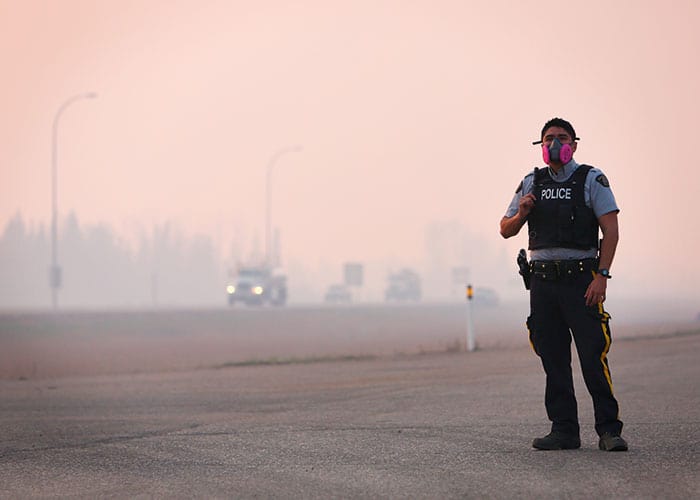 A police officer manages a roadblock on Highway 63. Image: Getty

It was a lot to handle. Then, one October day, a board member at Habitat for Humanity, with whom Beata often volunteered, called to say she was moving away from Fort McMurray. Beata was sad to see her go—but she also worried whether her home would ever be built. The board member asked Beata to meet her at McDonald's, and from there, the two drove to the lot in Waterways, where volunteers had just started to build.

"Oh, my goodness, I cried," says Beata. "It was a rough time, and it was a good time. It was a mixture of everything. I was so happy [about the house]."

Mixed feelings
In attempting to describe the collective experience of a community hit irrevocably by natural disaster, you could do worse than: It was a rough time, it was a good time, it was a mixture of everything.

Take, for instance, the school system. On May 3, teachers and staff in Fort McMurray were tasked with a complicated challenge: Help kids find their parents, evacuate their schools and leave their own homes. 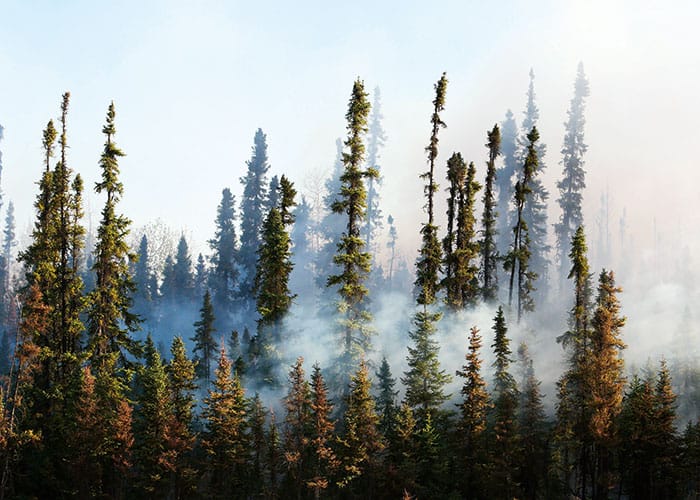 In the days following the fire, police led convoys of cars along the highway and through a still-burning Fort McMurray to safety south of the city. Image: Getty

Leslie McPherson, who was the principal at Father Beauregard elementary school during the fire, witnessed the rapid spread of wildfire firsthand that day. In an area used to seasonal forest fires, the morning was clear enough for students to enjoy an outdoor recess and lunch hour. "What was unusual this time is that, instead of just smoke, you could see the flames in the neighbourhood behind the school," says McPherson. Around 1:30 p.m., a bus was called to evacuate students, staff and teachers to Father Turcotte elementary school. But by 3:30 p.m., it had to be evacuated, too, so a trio of buses carrying students from several schools made their way to Holy Trinity high school. Along the way, the adults on the bus communicated with families via cellphone, with some parents arriving at each stop to pick up their kids. But not every parent could make it, and by 11 p.m., there was still one bus that made the trek north to a Syncrude work site where McPherson's husband worked. The journey wasn't over, though; at 1:30 a.m., when it was safe to travel, one of the principals offered up his home in Athabasca, a town between Fort McMurray and Edmonton. The remaining passengers spent the night there and were reunited with their families the next morning. 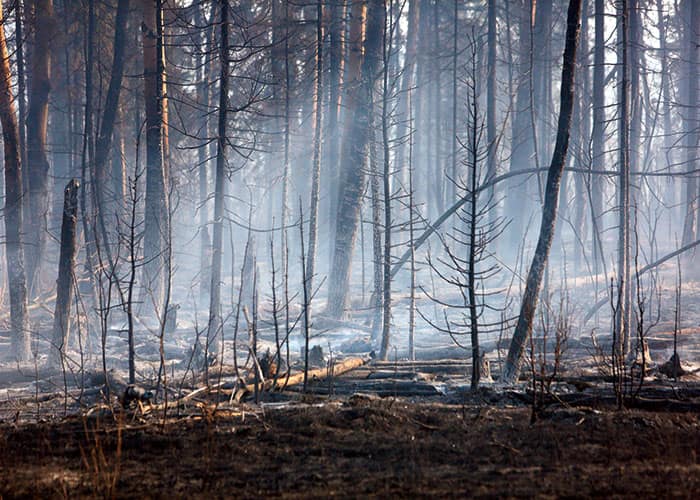 "The Beast," as it was dubbed, burned 589, 552 hectares, including these charred trees: Getty

At the time, no one realized how long it would be before the Father Beauregard community would be reunited.

"We thought we'd be able to finish the school year," says McPherson. "It took a while before it was clear that it wasn't just about the fire being out. It was about the cleanup and the devastation in the neighbourhood around the school."

About 110 of McPherson's students are now spending the year at Father Turcotte. They can't return to Father Beauregard until the neighbourhood is rebuilt (almost all the homes surrounding the school burned to the ground), a process that could take up to two years—if those families choose to come back.

The aftermath of the fire has left an imprint on the mental health of the school system. So much of the burn scar is invisible. "We know that, for many of the kids, they will have their moments when they need extra support," says McPherson. "Trauma can have a five-year cycle. This year, it's at the forefront of our minds. As we get years away, we have to keep reminding ourselves to stay vigilant, not to let those things slide, to continue to look out for and watch what's happening with our children." 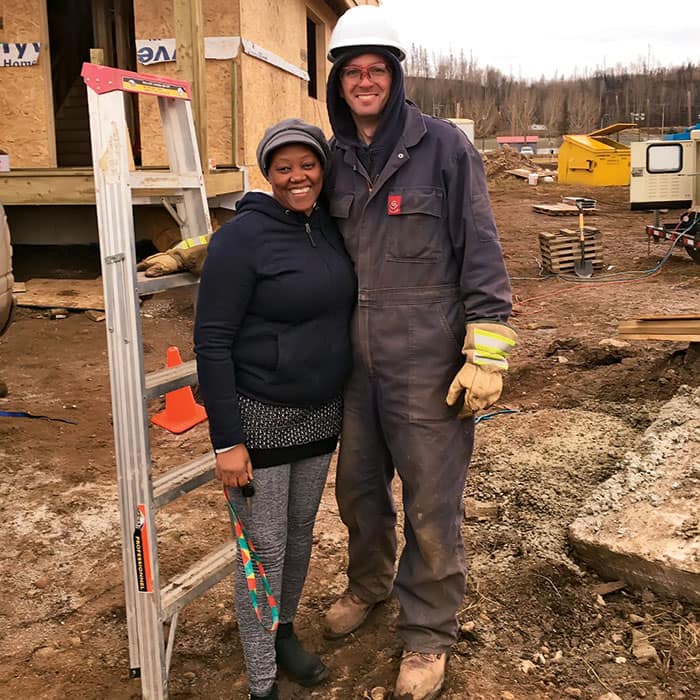 What it's like to be a Fort McMurray evacuee

Sandra Meza, a single mom of three, tells Canadian Living about driving through the flames on the way out of Fort McMurray, searching for shelter and what she's going to do now.

How Fort McMurray residents are finding hope, one year later