A school in Edgerton, AB, has a Halloween tradition that doesn't include chocolate, candy and costumes. The students and staff of the school host a food bank in October and have collected over 6,000 lbs of food in the last four years. Their goal is to inspire others to do the same.

With only 500 residents, Edgerton, AB, is the kind of town where you can walk down the street and know just about everyone you pass. When the leaves turn golden and the wind picks up, it's the sort of place where fall comes to life. As Halloween approaches, it's also a place that has found a way to mark the celebration with more than just candy and tricks.

It all started back in 2012, when the Edgerton Public School's student leadership group began collecting food donations for local food banks, explains Brande Manzer, a teacher at the school. The next year, their drive took on a larger dimension, when the local branch of Farm Credit Canada joined them to participate in the annual WE Scare Hunger Campaign.

Then, in 2014, Edgerton Public School decided to start an annual competition with E.H. Walters School, in the neighbouring town of Paradise Valley, to see who could raise the most food by weight during the month of October. The principal of the "losing" school would have to attend an assembly at the winning school and complete a task chosen by the students there. 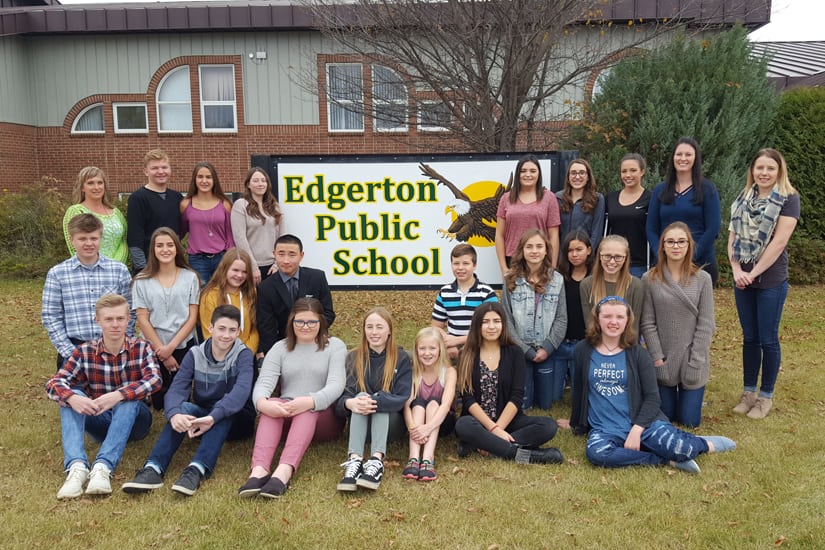 Image courtesy of WE

The two Kindergarten-to-Grade-12 schools have about 100 students each and are fierce but friendly rivals in just about everything—and doing good is no exception. Edgerton won that year and they had the rival principal dress up as a cheerleader in their school colours of green and gold and give a cheer. Edgerton won the next year as well, but has lost the past two years and their principal has had a bucket of "slime" poured over his head.

"We're all a little bummed out [about losing], but [the food is] going to a good cause, so we're in good spirits about it," says Janae Wildeboer, a Grade 11 student and vice president of the school's Student Leadership Club.

Keeping it fun without losing sight of the larger goal of fighting food insecurity has been the key to keeping the competition going. Families throughout both towns participate in the competition by contributing food items. Even the youngest members of the communities become involved. Image courtesy of WE

Sixteen-year-old Kensey Spornitz, president of the Student Leadership club, says getting the word out through social media has helped more students become involved.

"I feel like everyone is aware of hunger, but they don't want to talk about it or physically take action and do something about it," says Kensey. "So, I say get it out there so that everyone in your community can see it and be aware."

Learn how you can help fight hunger as a family.

A door to opportunity opens in rural Kenya

Canada’s WE Charity builds a college with donor support so students can build skills and careers.

How one town has made Halloween about more than candy