Share
If you’re looking for a Canadian booklist to dig into this spring, consider the five novels that are taking part in Canada Reads, the CBC’s annual book debate on March 21 to 24, 2016. As in other years, the five panelists will each defend one Canadian novel that fulfills a theme—this year, “starting over.” The list includes Birdie by Tracey Lindberg, Bone and Bread by Saleema Nawaz, Minister Without Portfolio by Michael Winter, The Hero’s Walk by Anita Rau Badami and The Illegal by Lawrence Hill . 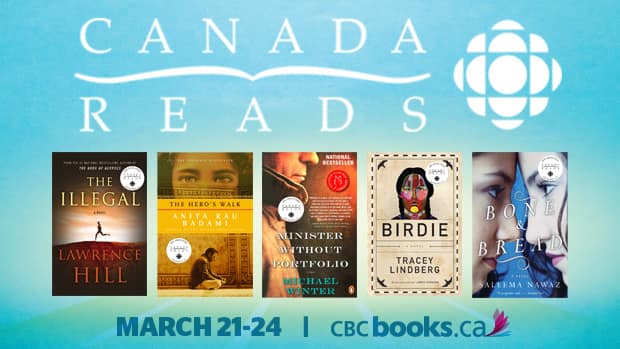 In anticipation of the debate, we’ll be chatting each week with new host Gill Deacon—author, mother of three and host of Here and Now on CBC Radio One—about her love of reading, the books on the Canada Reads shortlist and the novels that have moved her this year and throughout her life.

Why do you think the “starting over” theme is relevant to Canadians?
I don’t know what the idea was behind choosing the theme this year, but it’s interesting because this weekend the federal government reached its pledge of bringing 25,000 refugees to Canada from Syria. I’m involved with a private sponsorship and our family just arrived a week ago. Even in the few days of working with them, helping with the resettlement and the transition, I’ve been thinking about how profound it is to begin again and to put your faith in a new circumstance. You have to hope and believe that it’s going to hold better fortune than what you’ve come from. To me, that’s what resonates this year with the theme of starting over.

You have to read all of the books before the debates. Can you tell me about Anita Rau Badami’s The Hero’s Walk (which will be defended by Vinay Virmani)?
I absolutely fell in love with this book. I was totally transported to India, where it is mostly set. The writing is so lyrical and fragrant. You can feel the ground under foot. You can see the cracks in the furniture and smell the breeze from the ocean. I feel like I lived the experience of that book. It was so gorgeously written and laid out.

Every character spends much of the time in the book very stubborn and, in some cases, clinging to the old ways and the old world and the way they think it should be. The starting over in this book is more about acceptance, starting with a fresh attitude and starting over with relationships—which I feel is so universal. I’ve never been to India. I’ve never been a grandparent. There are a lot of things, plot-wise, that are so different from my life. But I related with such deep empathy to all of these characters and the ways that they struggle with the way they thought life was supposed to be.

Why should Canadians read this book?
One: Because everybody needs a book that makes them fall in love with reading. Anybody who needs to be reminded of the absolutely transformative and uplifting power of art gets to experience that with this book. And reason number two is the section in the book where the author talks about the hero’s walk. It references a traditional Indian dance, which involves these two dueling hero characters. The line is something about heroes walking with grace and dignity through whatever they’re dealing with. If every Canadian walked through their lives with grace and dignity, think of what a healthy, harmonious place we’d live in.

When you’re reading the Canada Reads books, do you feel like you’re picking a winner in your mind already?
I don’t. They’re so different, and yet they each have their own strengths that are so huge. So I don’t have a favourite at the moment. And even if I did, I probably shouldn’t say. But I think they’re all so different, but that’s what makes it really interesting. Their merits are quite unique.

Is there anything else that you’ve read this year that you really loved and would recommend?
There’s a book that I read at the end of last year called Plainsong by Kent Haruf. That book and a Canadian one, which is called Cool Water by Dianne Warren. I read them not too far apart from one another and they both had the same effect on me, which was to absolutely flatten me with their emotional impact. They’re both set in small rural communities. Both have this quiet, slow, simple plot structure, and yet they run so profoundly deep into your heart and your emotions.

What makes you so attached to the books or feel so deeply?
I think because all of the characters are so different from my busy, urban, active life. And I found the authors convey these deep emotions with the smallest, subtlest gestures or details. They’re impactful almost by being so quiet. These simple little things that happen sort of floor you with how much they make you feel.

Check back next week for more on Canada Reads and more of Deacon’s book recommendations.