From Homs, Syria, his family made their way to a refugee camp in the Bekaa Valley in Lebanon as fighting intensified, civil society collapsed and buildings crumbled around them.

Now safe in Toronto, Hani's story is similar to tales of countless other refugees. And like them, he'd be forgiven for wanting nothing more than to enjoy the simple pleasures of being a 20-something; going to university, being surrounded by loved ones, relaxing on weekends far from the turmoil and conflict that defined his life for so long.

But like many war-affected children, he wants to make up for lost time and to give back. 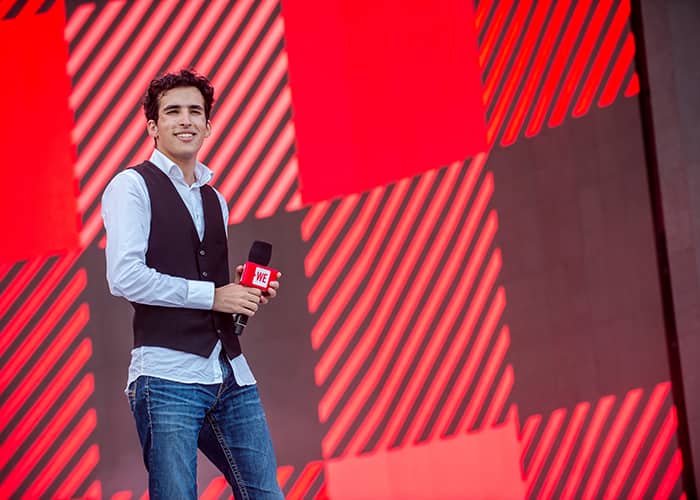 Hani Al Moulia shares his story of coming to Canada as a refugee on the WE Day Canada stage. Image by: Scott Quame

Hani's powerful photographs of Syrian refugees have been celebrated by Canadian Journalists for Free Expression. He's a member of the Prime Minister's Youth Council. And he's studying computer engineering at Ryerson University to help expand access to technology for people with disabilities.

His efforts to help others led him to WE Day Canada, to share the stage on Parliament Hill with leaders from across the country, including Prime Minister Justin Trudeau.

Hani's story inspired tens of thousands in attendance. As did Michel Chickwanine's, a former child soldier from Congo who's become a powerful voice for rehabilitation and peace since finding refuge in Canada.

Hani and Michel—one a child refugee, the other a child soldier—took the biggest stage in the country as a reminder of our national commitment to protecting all children from conflict. They are examples of what young people affected by war can accomplish when they are given a safe haven, support and rehabilitation.

Canada has a long and proud history of standing up for war-affected children.

We were one of the most vocal countries behind the 2000 UN treaty safeguarding children during war time, and among the earliest signatories to the Optional Protocol on child soldiers which requires states to make concerted efforts to reintegrate captured child-soldiers into society.

Canada recognized the need for global cooperation on this important issue and organized the first international conference on war-affected children, held in Winnipeg in 2000, bringing together delegations from 130 nations, over 100 civil society groups and youth representatives.

We've contributed to demobilization and reintegration projects for child soldiers in the Democratic Republic of Congo, Sri Lanka, Afghanistan, Sierra Leone, Somalia, Uganda and Sudan, with funding and on the ground peace-building efforts, including support for UNICEF, the Red Cross and local youth education organizations.

And our rehabilitation and support programs for Syrian refugees have drawn praise from around the world.

War affects everyone—children worst of all. Whether a weapon is put in their hands or not, conflict robs young people of their future. Having grown up in conflict and war in Gaza, I know the impact it can have. So, in 2010, in the hopeful wake of the Arab Spring, I returned to the Middle East to establish youth empowerment programs for young women across the region. 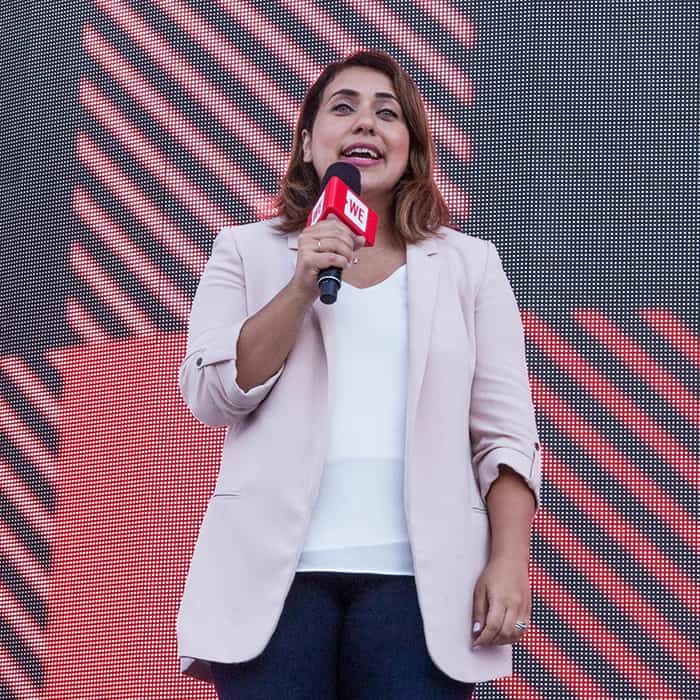 Dalal Al-Waheidi on stage at WE Day Canada. Image by: WE Charity

The girls and young women I worked with in Palestine and Tunisia wanted more than anything to change their circumstances. They shared stories of women's empowerment, received leadership and technology training and discussed social issues in their communities. They thirsted for opportunity. And with what little they had, within the confines of gender roles that usually keep women quiet, and despite the ongoing conflicts that still dominated their lives, they impressed me with their desire give back and become more.

They share that desire with Hani and with Michel. They share it with all the refugees who have found a home in Canada and the child soldiers who have put down their weapons and sought rehabilitation.

These resilient young women and men are the reasons we, as a country, believe in protecting young people from conflict.

Hani and Michel are proof that those dreams can be realized.