"Being indebted to a bank for the majority of my life was never my plan."

Stevie Quinney was tired of her Vancouver lifestyle. Only 22 at the time, she was paying $700 a month for a bedroom in a shared basement suite and struggling with student loans. Then, she started reading The Big Tiny: A Built-It-Myself Memoir by Dee Williams, a tiny house guru of sorts, and something clicked. "It sparked the idea that I could move to a small house, that it was doable," she says.

So doable, in fact, that she contacted her mother in Winkler, Man., about 90 minutes southwest of Winnipeg, and told her that she wanted to move back home and create her own little house—out of shipping containers. Her mom and her stepfather were immediately on board, but the real seal of approval came in March 2015, when, for Stevie's birthday, they bought her two shipping containers to get her journey started. 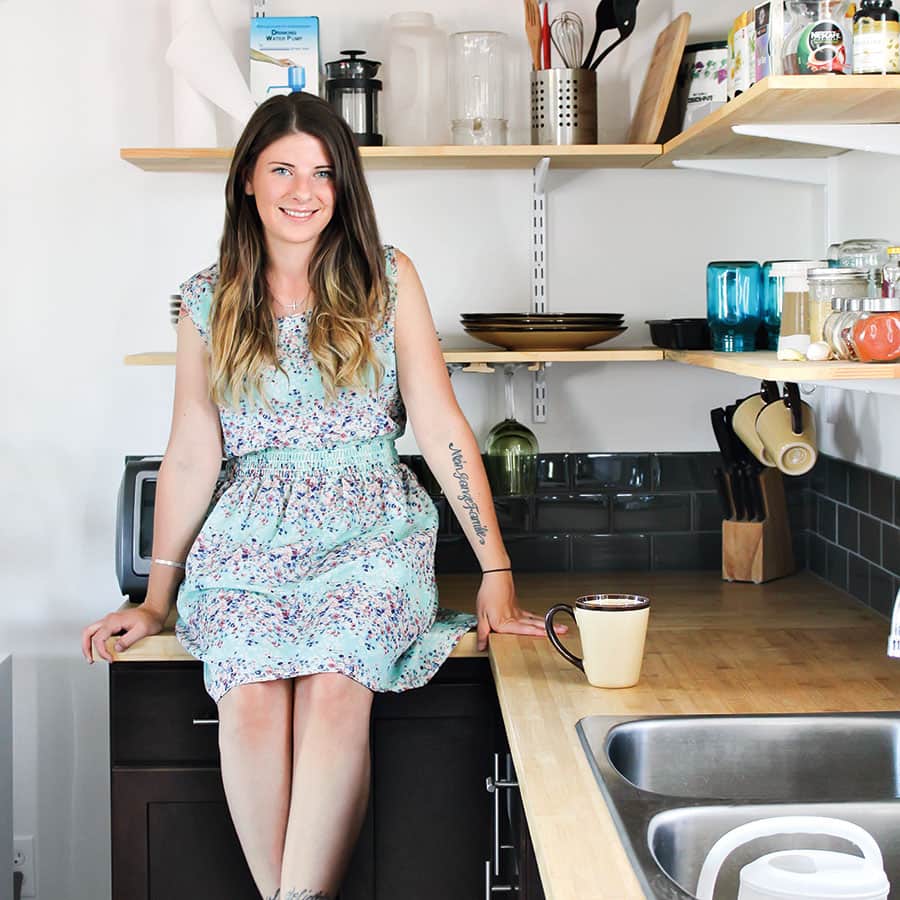 Steve Quinney in the kitchen of her small house in Wrinkler, Man.

More and more people are embarking on a similar path. Covering everything up to 1,400 square feet (see Small Talk, page 54), the tiny house movement has been gaining momentum. But what's the big attraction?

It's a few things, explains John Infranca, assistant professor of law at Suffolk University's law school in Boston and research affiliate at the Furman Center for Real Estate and Urban Policy at New York University. "We've got a demographic trend of people living in smaller households," he says. "People live as singles for longer periods of time, married couples delay having children or aren't having children at all, seniors are living longer after being widowed and people are divorcing at higher rates. These smaller households are drawn to smaller homes."

At the same time, he says, there's a movement toward owning less "stuff," which has been made easier by technology, as we don't need as much space to store books, music and movies as we once did. Finally, there's the environmental aspect. "The idea of a smaller footprint and less energy-intensive usage is attractive to a lot of people."

That was certainly the case for Stevie. "I've always been conscious of being eco-friendly," she says. "I really like the idea of not having more than you need."

She also liked the idea of owning her home—no mortgage—and designing it to suit her lifestyle. With the shipping containers already purchased, Stevie started researching floor plans online. She'd never done one before, but after looking at some container-house layouts, she drew her own and sent it to her stepfather, who refined the drawings even more. 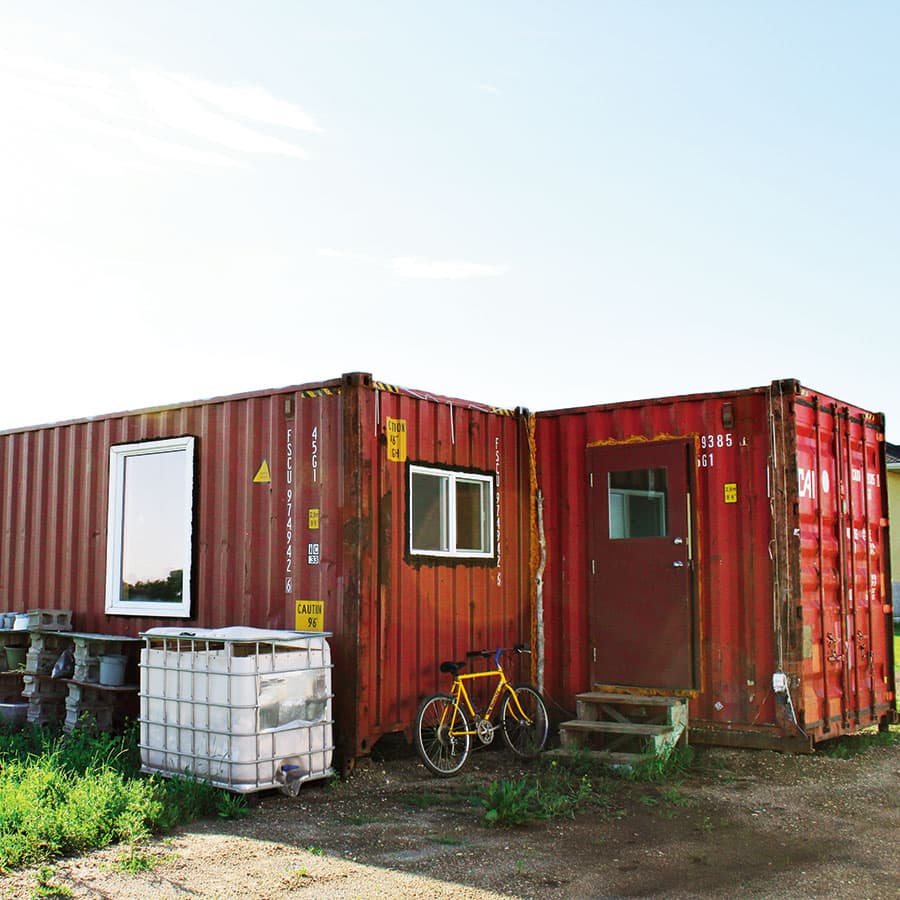 Stevie built her small house out of two shipping containers given to her by her mom and her stepfather.

He helped with construction as well, along with his brothers, all of whom had experience building sheds, workshops and barns. "They knew a lot about how to do the plumbing and electrical work, so we didn't have to hire anybody," says Stevie. Six months and about $50,000 later, she moved into her 600-square-foot home.

At first, it was rough going. Unlike tiny homesteaders in California or Oregon, Stevie had the Canadian climate to contend with. "The first week, the pipes froze, so I was hauling water from my mom's home," she says. And because there wasn't time to install the wood stove she bought, she had to use a small electric shop heater through the winter. But eventually, warmer weather arrived, and now, Stevie says the place is looking good. "It's really nice. I've got all of my furniture, and my living room is set up."

Beyond the physical comfort of her own home, though, she feels a great sense of accomplishment. "I'm at a stage now where many people my age are getting married, buying houses and having children. It's wonderful, but it's also very expensive," she says. "Being indebted to a bank for the majority of my life was never part of my plan." She values flexibility and life experience over a big house and a mortgage, and she believes that even more tiny houses are on the horizon for those in her age group and younger. "This small house movement is turning into a very big thing." 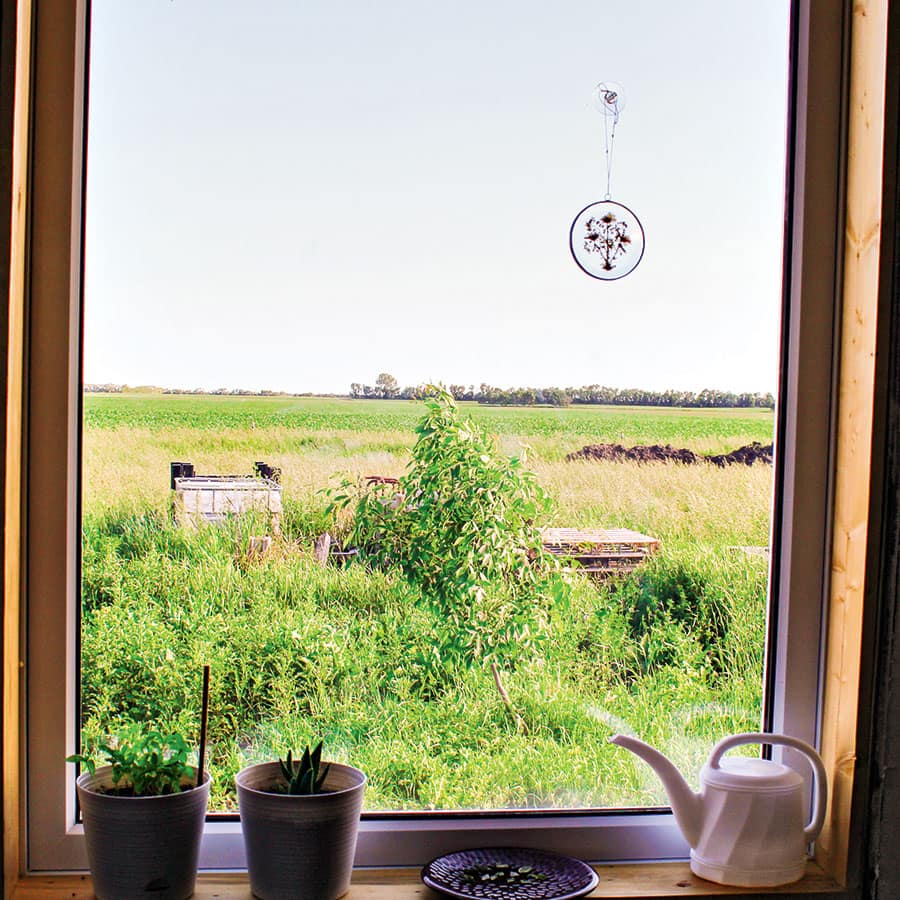 The home looks out over the Manitoba Prairies.

The pros and cons of tiny living

The upsides
Affordability: You can build your home for much less than the cost of a regular-size home—think anywhere from $5,000 to $70,000, as opposed to more than $1 million in Vancouver or Toronto—and live mortgage-free. Low utility bills: Your heating, cooling, electricity and water usage will cost less than in a regular house.
Planet-friendly: Little homes use fewer resources and take up less space. In addition, many owners use solar power, compost toilets and other environmentally conscious options.
More social time: A tiny interior space may send you out into the world more often. The local coffee shop, for example, could become your home office, or you may be more inclined to go out with friends.

The downsides
Land costs: Your house may seem like a steal at first glance, but land costs could bring the overall expense of your home to much more than you imagined.
Little to no storage: A tiny home is not for those who like to collect books, shoes, clothes or knickknacks. There's just no room for nonessentials.
Less personal space: Though some families do live—and thrive—in small homes, many people would struggle with sharing less than 500 square feet of space with more than one person.

Read more:
How to make a tiny house into your dream home
A budget-friendly camper revamp
8 pieces of small furniture that will maximize your small living space

What it's really like to live in a tiny house