Share
This story was originally titled "Distinctly Canadian" in the July 2010 issue. Subscribe to Canadian Living today and never miss an issue!

What are you doing to make Canada a better place? Share your stories, photos and videos with other readers using the comments tool below.

"They Desire a Better Country."
The motto of the Order of Canada is a fitting description for the more than 5,000 citizens – including the likes of former prime minister Jean Chrétien – who have been chosen to receive one of the country's highest civilian honours. Recently, Gov. Gen. Michaelle Jean announced 57 new appointments, none more proud to wear the telltale snowflake insignia than social justice advocate Jean Augustine and veteran actress Tantoo Cardinal, both acknowledged for the scope of their careers. Equally humbled were Laura Marie Drudi and Kanika Gupta, participants in the Order of Canada Mentorship Program, which pairs recipients of the Order of Canada with community-minded youth in search of knowledge and inspiration. The result? To paraphrase the governor general, who established the program in 2008: "untold promises for the future of our communities." Meet these four inspiring women, who reflect on their lives – and continue to strive to make Canada a better place.

Jean Augustine
Member of the Order of Canada, for her career as an educator, politician and advocate for social justice in Canada. Jean Augustine came to Canada from Grenada in 1961, embracing her adopted land and seizing any opportunity to serve her country. The first African- Canadian woman to be elected to the House of Commons, Augustine, 72, is now the fairness commissioner of Ontario, ensuring a just assessment of the credentials of newcomers.


Page 1 of 4 – Learn how Order of Canada recipient Jean Augustine overcame obstacles and achieved success in a new country on page 2.
Recognition for a life's work: the Order of Canada
"It complements the good things I hear from people. I've had ex-students remind me of certain things that I did for them, or ways in which I supported their education. Or constituents who would say,  'This is happening in my life now because when I came to you, you assisted in this way.' It's little things, not big, earth-shattering things, that we do in terms of service. Growing up in Happy Hill, St. George's, Grenada, with a whole lot of very strong women, I learned [about a] sense of community, a sense of caring. We didn't have very much, but what we had, we shared. I learned that you participate in activities. So when I came to Canada, it was just a continuation of that, looking for the opportunities to participate, to belong, to make things happen."

The path to self-esteem
"My father died when I was nine months old. And so my grandmother was the one who helped my mother. Very early, I got the sense from my grandmother that there was nothing I couldn't do. She would always say,  'Girl, you can do it!'"

You have to be resilient
"I had to overcome the subtleties [at play] at the time in Canadian society: the fact that I was an immigrant, the fact that I was black, the fact that there were individuals who thought I was a little too ambitious. There were all these subtleties that I had to pretend I didn't notice, and overcome in some way, because it could be very debilitating if you were to follow every slight. When I talk to young people, I talk about setting a goal, committing yourself to something, being credible, having the right credentials and being resilient."

Canada is a place of opportunity
"I didn't have a sense that, as a black person, I couldn't do whatever [I wanted]. I saw myself as a minority when I came here because, you know, you walk into a room and can count on the fingers of one hand other people of colour. But at the same time, I didn't see that as something that would hold me [back] from the goals I had set for myself."


Page 2 of 4 – On page 3, discover which iconic Canadian actress is a recipient of the Order of Canada.
Tantoo Cardinal
Member of the Order of Canada, for contributions to the growth and the development of aboriginal performing arts in Canada, as a screen and stage actress and, in addition, as a founding member of the Saskatchewan Native Theatre Company. Born in Anzac, Alta., Cardinal, now 60, was deeply affected by the discrimination she witnessed in her youth and by the flawed portrayals of her people that peppered movies of the '50s, '60s and '70s.

A sense of injustice
Determined to correct misconceptions about her gender and heritage, the actress – whose myriad screen credits include the Oscar-winning Dances With Wolves – made it her life's work to paint honest portrayals of women and aboriginal people.

"Our people have been absolutely ignored. It seems that this society does not understand at all the importance of who we are, as earth people, and the incredible wisdom and generosity and kindness [that exists]. It's been important for me to fight for authentic portrayals of women and of aboriginal people with whatever I could. As an actor, you don't have a lot of power, you have to make a deal. You have to say, 'Well, I can make some progress on this issue, but I have to let that one go.'"

Effecting change through art
"One example of my professional accomplishments is the film Loyalties, because it came out at a time when people really weren't looking at the issue of sexual abuse. It made a personal impact on audience members. Loyalties illustrates what the arts can do."

I barely made it through high school
"I never went to university, never went to college. So most of my learning is from other people who have gone and done that, and from life, and bits of reading here and there. Now, I tell people, 'Go to school, go to university,' because the atmosphere has changed greatly."

My people inspired me
"Being raised by my grandmother meant that I spent a lot of time with older people, and listened to them tell stories. In a very tactile way, I got a sense of ways of life, places that they've been, experiences that they've had. Such marvellous storytellers."


Page 3 of 4 – Get to know the next generation of outstanding Canadian women on page 4.
Laura Marie Drudi
Participant, Order of Canada Mentorship Program. A second-year medical student at McGill University in her hometown of Montreal, 21-year-old Laura Marie Drudi is focused on becoming an aerospace physician, and follows a rigorous schedule of courses and volunteer pursuits that will enable her to stand out in a competitive field.

My passion for space came first
"When I was nine, I went on a class trip and saw on a big screen Canadian astronaut-physician Dr. Dave Williams on his first shuttle launch. I was, like,  'I want to pursue a career in the space industry.' And when my great-grandmother succumbed to cancer, I decided to do some cancer research and found myself interested in experimental medicine."

My mother encouraged me
"It was only when I got into university that she really saw how serious I was. If I didn't have the support of my family, I think I would have let go of this dream a long time ago."

Follow your dreams
"I had the privilege to speak to pioneers of the space industry. I'm proud of having been accepted by the Canadian Space Agency to present at the International Aeronautical Congress in Korea. I love to speak with young students about space, about dreams and holding on to those dreams – because you never know when they can come true." Drudi is the only Canadian accepted for an internship at NASA this summer. 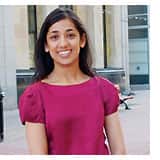 Kanika Gupta
Participant, Order of Canada Mentorship Program. Although Gupta has a degree in finance and business from the University of Ottawa and is now completing her master's degree in public administration at the University of Victoria, the 23-year-old never warmed to strict business studies, but she did find a way to apply them. "I did a microfinance project in West Africa in May to August 2007, and that opened my eyes," she says. "It taught me how business skills could be used at a more strategic level." Now the Ottawa native is dedicated to social change, and to Nukoko, the nonprofit organization she founded that works with local groups to aid access to resources in West Africa.

The power of giving back
"I was always superinvolved in the community, even in high school. I started a club to help students get their volunteer hours. To some people, 'helping others' can be abstract. But if you say, 'This is your chance to meet other really cool people, to get engaged, to discover your community like you've never seen it before,' then they see the tremendous value."

I credit my family
"To this day, my parents are highly involved in the community. So I think those values came from them. And that's why they've chosen to support my goal. That can never be underestimated: the support you receive from your home."

A point of pride
I just love how Nukoko grew – it came out of this passion and I love how, in just under three years, it's been able to grow. Right now we're supporting 600 girls. That's a huge accomplishment and something I'm proud of. But I can't take full credit; we have a team in Ottawa, and our partners in Africa are phenomenal."


Page 4 of 4 – Learn more about the Order of Canada and the inspiring mentorship program on page 1.