Share
Share
An emotion-packed day at the 2012 Olympics: Energizing, Emotional I was alternately drained and exhilarated yesterday.  I'm not sure how Olympian athletes and their families do it. Early in the day I was introduced to Canadian diver Alexandre Despatie's father, Pierre, in the lobby of my hotel. I also spotted his incredible mom, Christiane, looking surprisingly calm and a bit subdued - a huge contrast to the media-savvy mom I've watched in media clips all week. "She's always like this before Alexandre competes," I was told. It's got to be difficult for the families. I still feel for triathlete Paula Findlay and her mom, Sheila, after Paula's heart-breaking experience on Saturday. Here are some emotional highs and lows from a regular day at the Olympics: 1. Meeting an Olympic Mom from Turkey [caption id="attachment_12535" align="aligncenter" width="330" caption="Turkish wrestler Riza Kayaalp's mother and twin sister (Photo: Doug O'Neill)"] 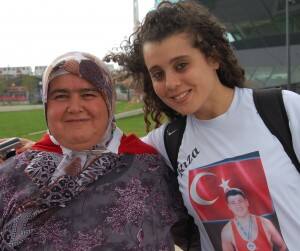 I've been blogging about various moms of Canadian Olympians and yesterday I was thrilled to speak (with the help of an interpreter) with the mother of Turkish wrestler Riza Kayaalp and his twin sister. This was their first Olympics and first time in England. Riza's mom is one of hundreds of Olympic moms who was able to see her 'boy' compete in the London 2012 Games thanks to Procter and Gamble's Thank You Mom Campaign. She was so cute, giving the universal thumbs-up when I congratulated her family. 2. Kudos to the Irish fans in London! [caption id="attachment_12540" align="aligncenter" width="330" caption="Irish Olympic fans cheering for Team Canada (Photo: Doug O'Neill)"] 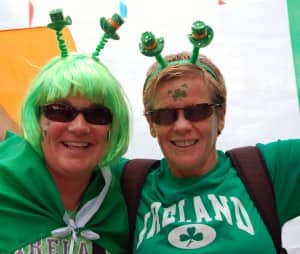 How can you not warm to the humour  and generosity of the Irish? I was with my cohort Natasha at the women's boxing semi-finals (the sport making its Olympic debut this week) when Ireland's lightweight boxer Katie Taylor walked into the stadium. The place exploded. There were thousands of Irish supporters, and, as always, they were a fun-loving bunch. The Canadian contingent around the ring was, obviously, a lot smaller.

What I found heart-warming and made me go fuzzy all over was the chorus of "Go Canada" from the rowdy, loveable Irish during Canadian Mary Spencer's bout. Good on the Irish for cheering for another country. Not everyone does that. (Of course, when Ireland's Katie beat Britain's Natasha Jonas 26-15, the roar was deafening.)

3. Mary Spencer's Mom, Ruth.  All Canadian eyes were on Mary Spencer during the women's boxing quarterfinals. It was an incredibly tight bout but she lost. I was sitting in the row behind Mary's mom, Ruth. It struck me that she was just like any other mom  watching her child at a sporting event. She had her daughter's name stenciled on the back of her t-shirt, she proudly tucked a Canadian flag in her hair, and was snapping pics throughout the event. Just like any other mom. I can't imagine what it's like to watch your child, one you've supported with your heart and soul, compete in front of a global audience.  It was intense enough for me as a fan of a Canadian Olympian. 4.  Okay, let's nix the booing, shall we? Some fans' behavior brought me down a little. Sadly, a huge number of Brits in the house displayed poor behavior when Britain's star boxer Savannah Marshall was trounced by Marina Volnova of Kazakhstan. Marina, who won fair and square, was booed when she was paraded out of the stadium. Folks, this is so not on, seriously. There were thousands of British supporters at the ExCel centre for this competition. But how many supporters of Marina from her home country of Kazakhstan were there to cheer her on? I can't imagine there were many. Displaying disappointment if your country's favourite athlete loses, fine, I get that, but to collectively boo the victor -- especially one from a country with hardly any patriots at the event?  It didn't strike me as true to the spirit of the Olympics. Enough said. 5. All in the family I met a group of moms in the line-up who went all out painting their kids faces and really getting into the spirit of the event. It was a joy to see, especially the one family who had draped themselves in Union Jack attire from head to foot. Some of the costumes were outrageously funny. (More pics to follow.) [caption id="attachment_12549" align="aligncenter" width="330" caption="Kids get into the act at the Olympics"] 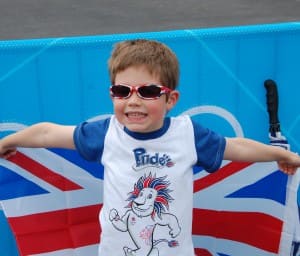 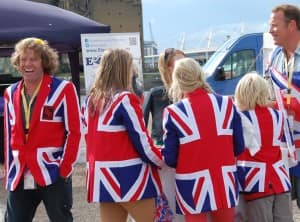 I'd love to hear about your emotional high points during the 2012 Olympics so far.