Share
Share
Going "home for the holidays" conjures up all kinds of notions for people. A colleague of mine has already packed for her annual trek down east to Halifax. She's yet to miss a Christmas with her folks in 25 years. The couple down the street wax poetic about house-to-house carolling that highlights the Yuletide calendar in the small Newfoundland outport where they were born. My sister-in-law raves about the Winter Festival of Lights in Niagara Falls, Ontario, where the townsfolk join together one night each December for a special Candlelight Stroll. Here's my first in a series of posts dedicated to holiday and winter traditions across Canada. I'll be checking in with Canadian communities across the country and sharing local holiday diversions. First stop: Banff Lake Louise, Alberta. Here's what the holiday scene in the heart of the Rockies looks like. Just Horsing Around [caption id="attachment_498" align="aligncenter" width="359" caption="Sleigh Riding in a Winter Wonderland"] 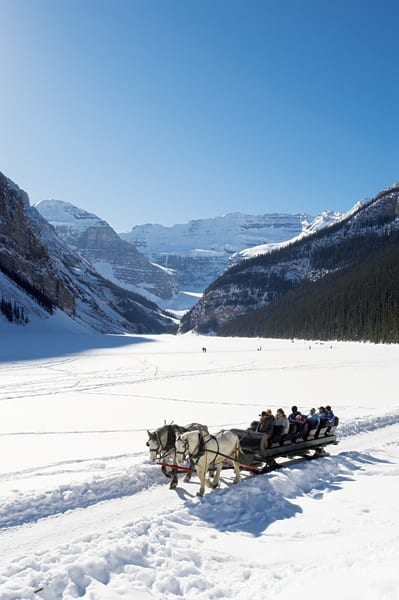 [/caption] For years, the highlight of my holidays was a horse-drawn sleigh ride on Boxing Day on the outskirts of Elmvale, Ontario. My late Uncle George had a team of Clydesdales he'd harness up to a huge sleigh and off we'd go. Turns out you can enjoy this same kind of lazy ride along the shores of Lake Louise in Banff, Alberta. And there's lots to look at - the Victoria Glacier is right there in front of you. One well-regarded outfitter is Brewster Adventures, which has been operating in Banff National Park since 1892. Howling Great Fun [caption id="attachment_501" align="aligncenter" width="405" caption="Dogsledding in Banff Lake Louise, Alberta"] 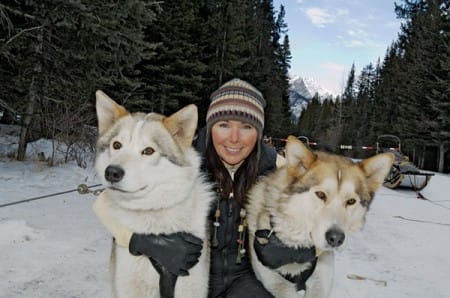 [/caption] If horses aren't to your liking, there are other four-legged options, such as Doug Hannah's Alaskan Huskies, which are more than eager to haul you on a 16-km dogsledding adventure in Lake Louise. Contact Kingmik Dogsled Tours. They've been in the dogsledding business for almost 30 years so you'll be in good hands, or should I say, paws. (Okay, ba doom bing. Bad pun!) You can also do lessons in dog-mushing.

Take A Walk on the Wild Side 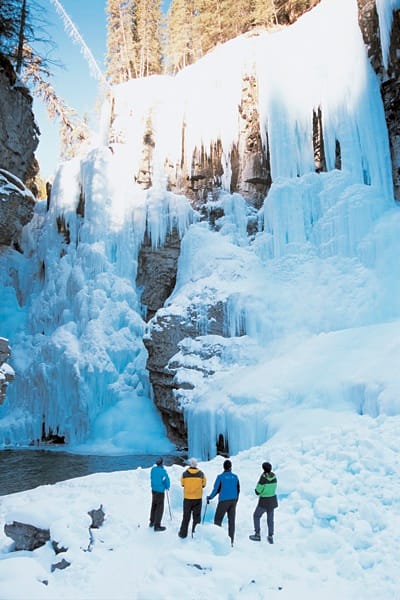 Traditions rarely alter for most of us, and this includes the post-turkey schnooze-fest that starts round about noon on December 25 and continues long past Boxing Day. A post-Christmas hike is the one thing that has always knocked me out of my food-induced stupour. If you're in the Banff Lake Louise area, you've got the awe-inspiring splendor of the Johnston Canyon Icewalk. But you're not just tramping on snow or frozen ground. In fact, for the some of the trek you're on steel walkways built into the canyon walls. Tours last about four hours and pass by various waterfalls which, if the temperature dips enough (and almost always does in the mountains in December!), are transformed into amazing ice sculptures. Click here for a Youtube video of Johnston Canyon Icewalk. If you want the real thing, Banff Adventures hosts nighttime walks. Cleats, mitts, warm clothes are musts!

Battle of the Blades, anyone? 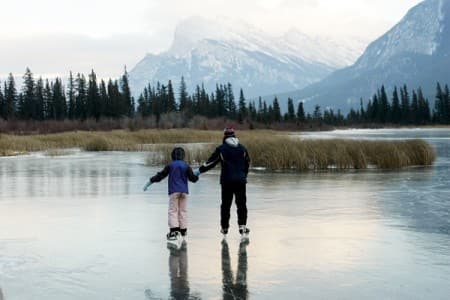 When I was a young boy in rural Ontario, the "rink" for us was my Uncle Bernard's frozen pond where his herd of 200 beef cattle quenched their thirst in steamy summer months. But, in winter, it froze over and, with the help of my uncle's garden hose we flooded the frozen surface and, voila, we had an instant outdoor skating rink from December to March. There's something almost Disney-esque about ice-skating on a frozen natural water body surrounded by trees and wildlife. If you happen to be in Banff Lake Louise area, grab your skates and head out to Vermillion Lake, which is just west of Banff between the Bow River and the Trans Canada Highway.

For more winter-time holiday activities in Banff Lake Louise, visit the Banff National Park - Lake Louise web site. I welcome you to post images and details on the holidays traditions and activities in your neck of the Canadian woods.