Gazing through the barrel of a wave, perched on her surfboard off the shores of Tofino, B.C., in the Pacific Ocean is where Krissy Montgomery, 38, feels most at home. With the island's sandy coastline and old-growth forest at her back, she takes to the cool water in her neoprene wetsuit and seems to soar.

As a flaxen-haired teenager from Nanaimo, on the eastern side of Vancouver Island, Montgomery developed an interest in surfing when she noticed that bands of boys were flocking to the west coast on weekends. Armed with curiosity and a few adolescent crushes, she followed them to Tofino's beaches, where they were catching waves. Soon, she was hooked—on surfing. By college, Montgomery had traded in her books for boards. Admittedly, though, her technique and skills were far from textbook. "I did everything wrong, from not using the right equipment to not understanding the ocean," she says.

When Montgomery wasn't in the water improving her technique, she was drawing. In 2002, her sketch of a surfer girl for a local surf school became its logo and landed her a job there as an instructor. A few years later, when the owner decided to chase bigger crests in Hawaii, Montgomery took over the business and became the boss; today, Surf Sister is a big fish in the small town of Tofino, employing an all-female staff of instructors, who teach everyone from preschool boys to retired women. "Female instructors teach in a unique way that's more approachable to the sport," says Montgomery. In the summer, her staff swells from a handful of employees to more than 30 women, including schoolteachers and nurses. Even her retired parents have taken up boogie boarding. "Some of my best rides have been alongside my mom and dad," she says.

In 2010, Montgomery cofounded Queen of the Peak, Canada's only all-female West Coast surf competition. "I wanted to give women their moment to shine. In surfing, they're always sidelined, and the prize was less than one-fifth of the men's purse," she says. The three-day contest draws athletes from California and Hawaii, too; the family-friendly event offers free childcare and dog sitting on the beach. "Amazingly, all of our volunteers are men, which means women are more readily available to enter and compete. The men in this community really step up to support the women," says Montgomery. It's possible that Tofino boasts more female surfers per capita than anywhere else in the world—and Surf Sister certainly has more than a little to do with that.

Now, almost two decades later, this self-professed environmental activist is just as stoked about surfing as she is about preserving the shoreline. "You can't help being committed to the land and ocean here—surf impacts every part of our lives," she says. Montgomery may have ventured west for the boys, but she stayed for the girls and Mother Earth. 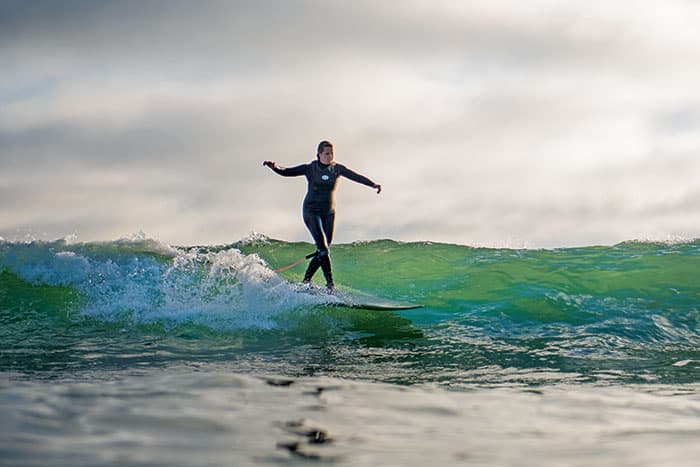 Montgomery's musts
This sporty entrepreneur shares some of her Tofino favourites.

1. Long Beach Golf Course
"I love hitting the links at our local nine-hole golf course. It's super challenging, and I've definitely lost my fair share of balls, but it's a blast and a West Coast gem."

2. Rhino Coffee House
"Best known for its freshly made doughnuts and house-roasted coffee, this is the perfect venue for catching up with my friends and people-watching the vibrant mix of characters."

3. Cleanline Sportfishing
"In the summer, when the crowds roll in, I head up the inlet to spend an afternoon with friends on an empty beach or do some sport fishing and catch my own salmon to barbecue."

Perched on the western coast of Vancouver Island, Tofino lures you in with its dramatic landscape, unspoiled beaches, majestic rainforests and exciting local cuisine.