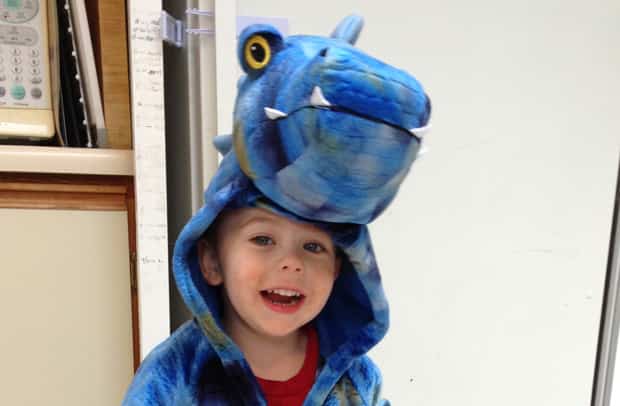 When is Halloween too scary for kids? A Port Colborne, Ontario school made the news this month for its ban on Halloween costumes, which resulted in an online petition, Facebook page and parent-organized Halloween parade. My own son's daycare, which is geared for the under-7 set, sent the following request: No skulls, skeletons or demons. I enjoy Halloween, a lot. It's a low-stress holiday that involves two of my favourite things: Dressing up, and candy. Although as you can see from the discussion right here on the blog, some moms step in about all the candy, and others don't. A long time ago I used to go all-out with the scariest house on the block, but these days I'm pretty pleased if we get home in time to catch the first round of kids trick-or-treating before dark. And I'll admit that I think it is super-cute to see the kids so excited to wear their costumes to school. When is the creepy mechanical skeleton too much? At the same time, my son's first year of trick-or-treating beyond the boundaries of our immediate neighbours led to nightmares after he came upon a house with a little mechanical skeleton in a cage that shrieked "help me!" We are not necessarily a family that shies away from a touch of the macabre, but that was a swift end to the fun for my little guy. I totally support my neighbours' right to have a little scary person in a cage (err... fake person) but I did kind of wish there had been some way to flag their house before we walked up the sidewalk. Because Halloween is for little boys in firefighter costumes too! Some people think the problem is that adults are trying to muscle in on kids' fun. Other people think that kids are wimps these days. And pretty much no one I know thinks that a black-and-orange day at school is anything like a Halloween party, although one parent of my acquaintance said that she wished for a ban so she didn't have to explain to her 14-year-old why her cheerleader costume needed about a metre more fabric. What do you think? Should people tone down their love of gross scary things? Are costumes at school too much hassle?

Don't miss our amazingly cute Halloween treats. They're not too scary - promise!

Is Halloween too scary for kids?