Source: Canadianity: Tales from the True North Strong and Freezing  by Jeremy Taggar and Jonathan Torrens

As a result of their wildly popular podcast, Taggart & Torrens, Jeremy Taggart (former drummer of Our Lady Peace) and Jonathan Torrens (Trailer Park Boys) compiled their favourite oh-so Canadian memories from on the road into a hilarious book that reads like a conversation you’d have with you best “bahd.” We caught up with the comedic pair to learn more about their book, Canadianity: Tales from the True North Strong and Freezing, and to find out how they "made it" in the Canadian art scene.

Canadian Living: You two come from separate areas in the art industry — television and music — how did you become friends?

Jonathan Torrens: Our Lady Peace and Trailer Park Boys were quite intertwined. OLP took TPB out on tour when the show started, which really helped us gain traction.

Jeremy Taggart: I think we’re different, me being in the music world and Jonathan being in the TV world, but we’ve been through so many of the same hoops and our senses of humour are really similar.

Torrens: Jeremy and I always felt that although our experiences were different, we were probably more similar at our core than people would expect. We are both people who started our career really young, we’re both family guys and we both don’t like the people who buy into their own hype. We bonded over those similarities.

CL: What inspired you to create a podcast together?

Taggart: Honestly, our personal phone conversations were very entertaining for the both of us, which is what I think a podcast should be. So we kept that in mind from the beginning. Now the podcast is just an hour of us talking about and reacting to each other’s weeks.

Torrens: We mostly talk about our everyday frustrations, parenting, nostalgia for when we grew up in this country, or things that come up in the news. It’s not topical by any stretch of the imagination, but we filled a hole that we didn’t know existed in the podcast world.

Listen for yourself! Sample the podcast below.


CL: What inspired you to turn the podcast into a book?

Taggart: The podcast started catching fire on a real grass roots level with people all over Canada, so Doug Lehman approached us and asked us if we were interested in writing a book. And that’s how it all started.

Torrens: I think the themes that are present in the podcast lend themselves to other mediums because we are talking about our everyday struggles as parents. I live in rural Nova Scotia and Jeremy lives in downtown Toronto, so our experiences are often different.

CL: Why did you title the book Canadianity?

Taggart: That was just a word that we came up with and thought was a good way to hang our hat on what we do. It’s the perfect explanation for Canada.

Torrens: I think it’s also a little facetious in that it sounds like a religion. But what is a religion if it is not all of your experiences and what you believe in shaping who you are? We also see examples of it everyday — when people bring us a homemade pie or jam on tour, or wear T-shirts with slogans from our show, that’s Canadianity.

Taggart: To me it’s being freezing cold and turning on your car — that’s classic Canadianity.

Torrens: The other night, we had a gig at the house of Strombo. Maestro Fresh Wes showed up and sang Let Your Back-Bone Slide and Stephen Page showed up to sing some Brian Wilson with us — that was Canadianity overload.

CL: Since you say that you’re both family men, what are some travel tips for road tripping with children?

Taggart: Don’t. No, I’m just kidding. Jonathan’s the king of travelling with the family, but I think it’s difficult to just get the kids out of the house — with two boys and a little girl, it’s madness. We usually stay close to home and do stuff outside all the time.

Torrens: My advice would be to do it. Kids are never more portable than when they are under two. My family lives in a rural area where it’s usually quiet and peaceful. So we visit the noise to show our girls that there is a big, wide world out there and that people live in all different kinds of ways. We use an RV to travel as a family because it’s a really interesting way for our kids to experience what’s around them.

CL: In the book you often mention “Five Notables”, what would be the top five notable places to visit with your kids in Canada?

Taggart: Jasper park Lodge would be a great family trip because you can go for walks and get your kids back in touch with nature, which seems to be not happening as much these days. Quebec city is cool too, because it gives kids a little more history.

Torrens: From east to west and north to south? Trinity Harbour, Newfoundland; Ucluelet, BC; Banff; Pangnirtung on Baffin Island; and, there is something pretty beautiful and haunting about the prairies. Go everywhere.

CL: What are your favourite oh-so Canadian activities to do with your kids?

Taggart: Tobogganing in the winter.

CL: In the book you talk about the short shelf life of a Canadian celebrity, why do you think this is?

Torrens: I think we have a sense of what is fair built into our DNA. Canada is more of a “he’s had his turn, give someone else a chance!” country than other places.

Taggart: I think our population plays a role, too. The amount of people talking about something is smaller than in other places, like America.

CL: Do you have any advice for Canadians who are pursuing a career in the arts?

Torrens: Technology has never made it more accessible. Just go for it.

Taggart: Experience is important. For a musician, try to be as good as you can on your instrument because if you get really good at your instrument that will do the work for you. It will take you somewhere.

Over the last year, we’ve tragically lost two important people in the Canadian art scene. I know that both of you have had a relationship with both John Dunsworth and Gord Downie, is there anything that you would like to share about their legacy or how they impacted the Canadian art scene?

Torrens: I think in both cases John and Gord were artists for arts sake. They were both true originals. I would love to be a fly on the wall for the conversation that they are having right now.

Taggart: I’ve only met John a couple of times and he was always a really sweet guy. He was on our podcast and I found him to be a very knowledgeable, insightful and charming man. With Gord, I was first a fan of his. When I was 13 years old, I started playing along with the Tragically Hip’s records while learning to play the drums. So to be first a fan of the band and then become a peer was a pretty amazing experience for me. Gord was such an intelligent, soft spoken man and a literary hero on top of that. I think his legacy will be celebrated for years to come. 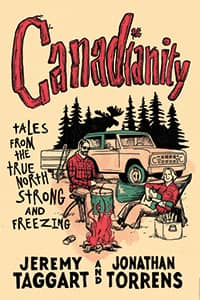