TV writer, actor, Twitter star and author—Edmonton native Kelly Oxford is a modern-day multihyphenate who's known for her witty, whip-smart pop culture commentary. But she's not afraid to use her platform to talk about issues that matter (mental health, women's rights, what it's like when relationships break down) and her latest book reveals the literary heavyweight beyond the punch line.

Kelly Oxford knows how to make people laugh. The Edmonton native became Twitter-famous (she has 700,000-plus followers on the social network) based on the strength of her hilarious—and, OK, slightly snarky—slice-of-life commentary on relationships ("Marriage is basically listening to your spouse yell at broken electronics and appliances from another room"), entertainment ("When it comes to karaoke, I'm the best at flipping through the playbook and imagining how good I could be") and raising three kids in Los Angeles ("7yo said, ‘My 2nd best friend at school is McDreamy's daughter on Grey's Anatomy.' In case you were wondering what it's like to live in L.A.").

Before she joined Twitter in 2009, she was a stay-at-home mom in Calgary. She'd been blogging but quickly realized that 140 characters was just the right amount of space to craft an amusing dispatch, hit send and watch it crisscross the Internet, collecting retweets and favourites along the way. Celebrity fans soon followed, including Jessica Alba, Jimmy Kimmel and Mindy Kaling. By 2012, she and her family had moved to L.A. so she could more easily pursue a screenwriting career.

Since then, she's authored two books (her second, When You Find Out the World Is Against You: And Other Funny Memories About Awful Moments, hits bookshelves this month), sold several TV pilots, acted in a movie or two and—oh, yes—started a small social media revolution.

Oxford had liberally sprinkled her Twitter feed with commentary about women's rights in the past, but last October, after hearing then–Republican presidential candidate Donald Trump discuss "grabbing" women without consent in a conversation with Access Hollywood host Billy Bush, she published a different sort of missive: "Women: tweet me your first assaults. They aren't just stats. I'll go first," it said. She went on to describe being 12 and groped by an old man on public transit. In total, 9.7 million women responded, many using the hashtag #notokay. It wasn't about politics—Oxford isn't eligible to vote in the United States—as much as it was an attempt to show how common sexual assault is, and how deep and lasting the impact can be.

The hashtag was part conversation starter and part collective catharsis, a reminder to women who have been assaulted that they're not alone. But it's also a larger metaphor for Oxford's own approach to writing, and maybe life. The thing that makes fans like her—the ability, and even desire, to say what other people probably wouldn't—is also the quality detractors dislike. But the combination of snark and honesty is what makes her writing resonate. That's true on Twitter, and it's definitely true when it comes to When You Find Out the World Is Against You. Sometimes, she's telling terribly sad stories—about her parents' divorce, the death of a longtime family friend or the panic-disorder diagnosis she tried quite valiantly to reject—but her trademark wit always provides much-needed balance. (The panic-disorder story contains an aside about the relative coolness of this particular diagnosis; it's less glamorous than the kissing disease, 20-year-old Kelly is pretty sure, but possibly still cute. Silver lining!)

We chatted with Oxford about #notokay, what it's like to be a Canadian expat and her writing process (or lack thereof)—plus some funny stuff, too.

Canadian Living: Your first book, Everything's Funny When You're a Liar, was also a collection of essays. How does this one compare in terms of subject matter?

Kelly Oxford: I think I was the same character in both of them, but the way I told the stories in the first book was from a very positive spin and about how I felt empowered. This book is more from my anxiety perspective, which was also there in all the stories from the first book, but my point of view changed between both books. That was something I did purposely, because I think when you're younger, you try to not use your higher brain to see what's actually going on; you just try to have fun. That's the first book. Then, as you get older, you start to use your higher brain and realize why things are happening or why you make your choices, and that's the second book.

CL: Speaking of that character, a big part of your persona is being candid. How do you balance what's private and what's public?

KO: I find that really easy, but I don't know exactly how I do it. I think I have a really strong sense of intuition about what's helpful to share and what isn't helpful; the desire to share things is usually my indication of whether or not I should. My intuition is generally right. And I've always [been this way]. Mommy blogging wasn't a thing 16 years ago when I was writing about being a mom, but I always knew what was acceptable and what was crossing a line. I don't think I've ever had blowback on anything, unless it's political, of course, but that's fine because everybody has the right to their own opinions.

CL: All of your kids are funny, but eight-year-old Bea is especially hilarious. Does she know how popular she is on the Internet?

KO: She does, but only because her siblings' friends told her. There were maybe three days in a row when she was on BuzzFeed, and they were, like, "What is she doing on this?!" So, of course, she found out. Then, she was, like, "Am I famous now? Can I host SNL?" That's her whole goal; she wants to know if kids have ever hosted Saturday Night Live. [Editor's note: They have—Drew Barrymore was just seven when she hosted SNL in 1982.]

CL: Her question about whether women get their periods on weekends, too, was gold. Are you always jotting down things she says to tweet later?

KO: No, it comes down to intuition. I just know when it's something I'm going to post. And you know, they're fine with [me posting], so that's great—until they're not fine with it, and then, it'll just be for me, all these funny things.

CL: You share so many unexpectedly funny moments in the book—and on social media, for that matter. Is your life really that entertaining or are you curating the best moments?

KO: I think I have more weird things happen to me than other people do! Sometimes, I think other people aren't seeking the humour in their day, but when I have friends ask, "Oh, what happened to you today?" and I tell them a story, they're, like, "Yeah, you're living a weird life." I'm a pretty open person, so maybe I'm inviting it. Or maybe that's my destiny.

CL: What's it like being a Canadian who's living in America right now?

KO: That's a good question. This is going on my sixth year here, so I'm integrated. I'm happy in my bubble of L.A; being in a big city is nice. I think I'm fortunate in that I wasn't able to vote, so I didn't get to feel the pain of my candidate losing, where a lot of my friends are so emotionally invested and feel so awful on a level I don't have to feel. And it would be different if I weren't living in L.A. But where I am feels pretty Canadian, politics-wise. I mean, weed is legal so…pretty liberal here.

CL: In the book, one of the things you say about #notokay is, "The sharing is maybe the thing that helps us see the world isn't really against us after all." How do you stay hopeful?

KO: By surrounding [myself] with like-minded people and knowing that the majority of people do feel the same way I feel; the majority are good people who know that sexual assault is wrong. We have to speak up and continue to say what our truth is and that it isn't right.

CL: Do you have a different creative process for the different types of writing you do?

KO: I think it's the same. It's a matter of how long I'm sitting down to write for and where I want to go with the story. I don't use different spaces and I don't pull out different crystals or anything. I just have to sit down and choose whichever one I'm feeling emotionally—or whatever deadline is closest, which is usually the reality.

CL: You're writing, acting, directing, producing—is there one thing you like best?

KO: I like when things are done the most! And I like getting a job the most. Everything else in between is a lot of work. 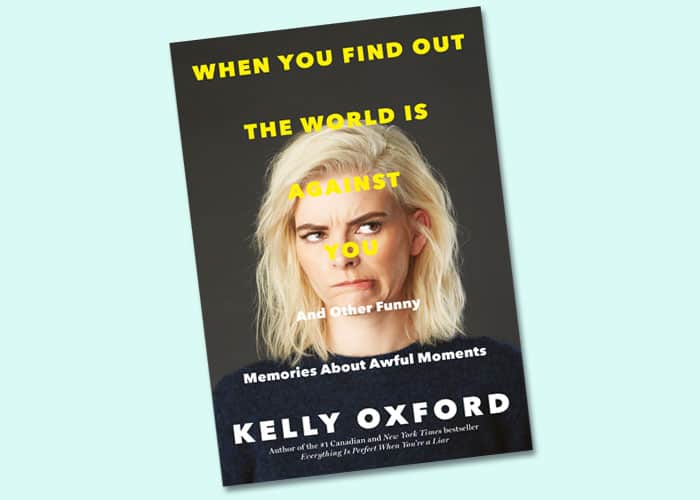 When You Find Out the World Is Against You: And Other Funny Memories About Awful Moments (HarperColins) By Kelly Oxford, $30. On sale April 18, 2017.