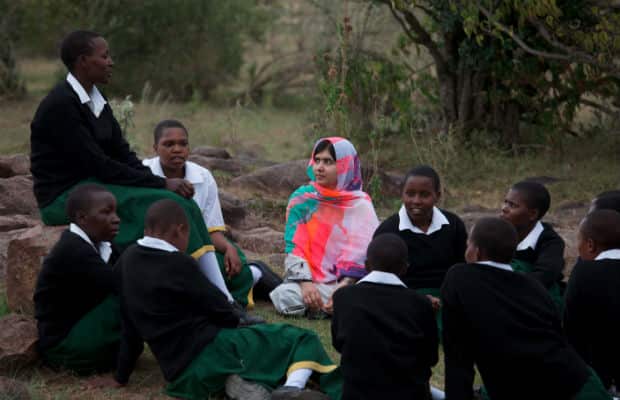 Malala Yousafzai spends time out of the classroom with students of the Kisaruni All Girls School in Kenya. (Photography: Courtesy of Free the Children)

She’s the youngest-ever Nobel Peace Prize winner, and she giggles gazing at images of hunky sports stars on her laptop. Malala Yousafzai is many things: fiery advocate for girls’ education, role model and survivor of a Taliban assassination attempt. At 15, she was shot in the head in Pakistan; her continued fight for girls’ education in defiance of Taliban law earned her the media moniker, “the bravest girl in the world.”

She’s also trying another near-impossible feat: juggling her humanitarian star status with that of ordinary teen. This is the portrait that filmmaker Davis Guggenheim crafts in his latest documentary, He Named Me Malala, which opens in North American Cineplex theatres on Oct. 2. And though Malala insists “I chose this life,” the burden of being the world’s beloved feminist hero in a head scarf must be herculean at times. The Norwegian Nobel Committee awarded Malala the peace prize, in part, for her fight to ensure that “children have the right to a childhood.” (Malala won jointly with Kailash Satyarthi, 64, an Indian children's rights advocate and child labour activist.) But Malala sacrificed this right as a preteen when she became a vocal opponent of the Taliban, blogging anonymously for the BBC. In the documentary, we see Malala in her new home in Birmingham, England (where she was airlifted after her shooting), doing ordinary things young people do. She struggles with homework and fitting in at her new school. She teaches her father to use Twitter, plays a boisterous game of cards with her family and fights with her two brothers. Then in the public eye, we see her in Nigeria meeting with the prime minister, demanding that world leaders do more to bring home the schoolgirls kidnapped by Boko Haram in April 2014. In Kenya’s Maasai Mara, where she travelled with Free the Children, she scrapes cement between blocks to build a school and deftly delivers a geography lesson to local students. At the barren border of Syria and Jordan, Malala stoically greets the weary refugees fleeing Syria’s civil war. The documentary reminded me of international headlines in August announcing that Malala scored six As on her school exams. It was as if she brought home her report card to the entire world—and the world expected no less than a perfect score. Perhaps the world owes Malala a reprieve, time out of the spotlight where she can truly be an ordinary teen with only the weight of schoolwork, friendships and other things young women fret about on her shoulders. But for now, audiences can catch her in theatres. Kathryn Dorrell is a former writer and editor at Canadian Living  and a mother of two teen daughters, who now works for Free the Children. The Malala Fund, which empowers girls through education, has supported the work of Free The Children.