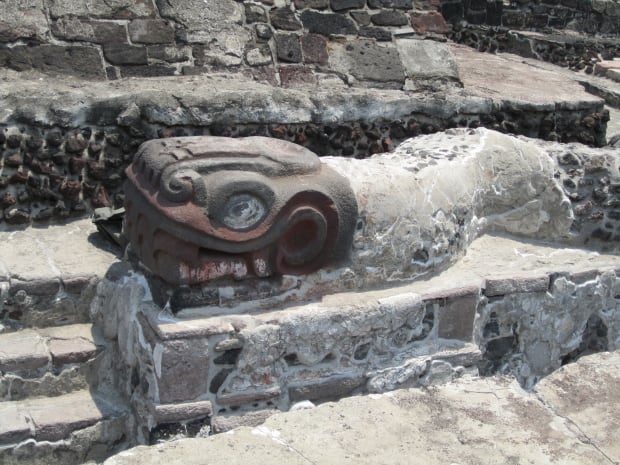 Imagine digging in your backyard only to find THAT staring you in the face. That's basically what happened to a crew of Mexico City electrical company excavators in the spring of 1978. What they'd uncovered was the Templo Mayor—the long-lost Great Temple of Technochtitlan, capital city of the Aztec nation. A pyramid that towered over the surrounding countryside in the early 1500s, the Templo Mayor was not only an impressive architectural achievement, it was also site of the Aztecs' grisly rites of human sacrifice. Sadly, this fascinating slice of Mexican history now lies a shattered ruin, having been sacked by the Spanish following the arrival of Cortes in 1519. Recent reconstruction efforts, however, have transformed the archaeological treasure into a totally unmissable tourist attraction, and the real highlight of my time in Mexico City. 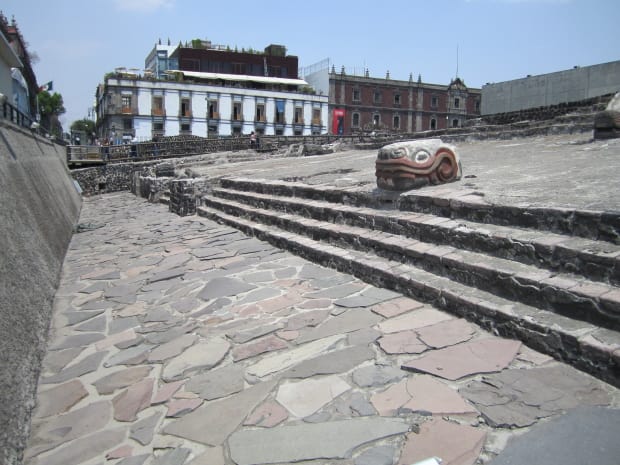 No, I was not into the Mezcal before taking this shot. The ruins have sunk under the weight of 500 years of Mexico City's development, and as a result, entire sections of the reconstruction sit an an alarming angle. Photography by Brett Walther. 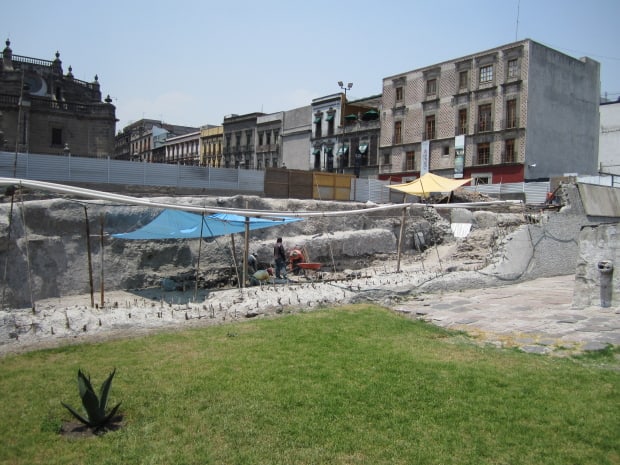 The site is still an active archeological dig. It's truly bizarre to be walking through a 500 year old ruin surrounded by very ordinary-looking neighbourhoods. Photography by Brett Walther. 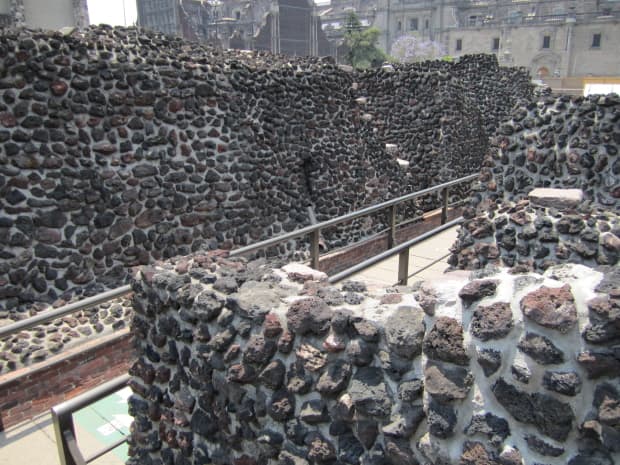 The temple was built from this very distinctive coarse, blackened volcanic rock. Photography by Brett Walther. 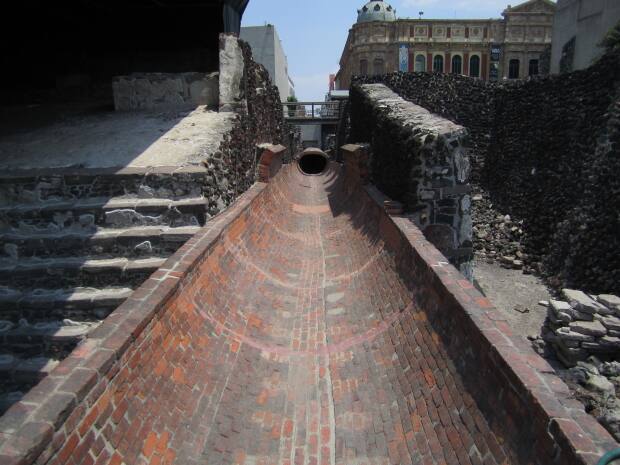 If this brick chute looks incongruous amongst the volcanic rock surrounding it, there's good reason. It turns out city workers unknowingly barrelled through the ruins when installing a sewer system in the early 20th century. Unreal! Photography by Brett Walther. 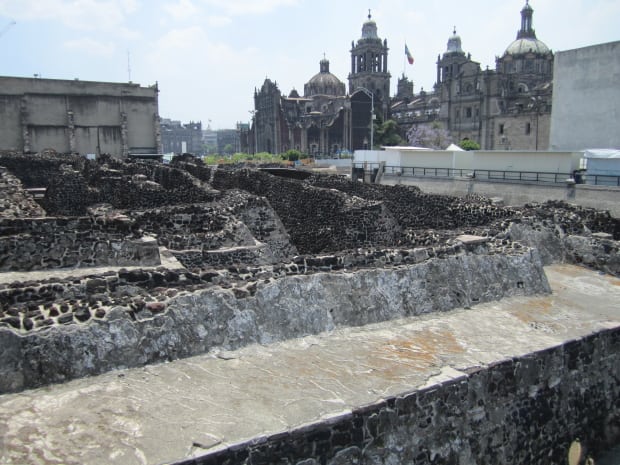 The Templo Mayor is conveniently located just a 10 minute walk from the Zocalo, Mexico City's city centre, where you'll also find the Metropolitan Cathedral, the belltowers of which you can see in the background here. Photography by Brett Walther. 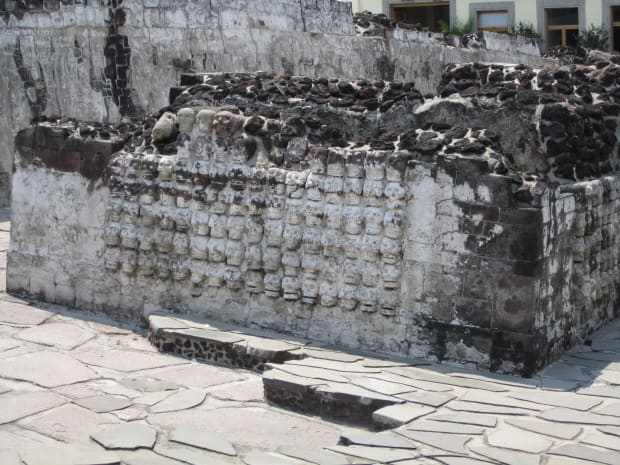 Gruesome, but undeniably fascinating, this shrine is decorated with row upon row of carved skulls: a chilling reminder of the Aztec practice of human sacrifice. Photography by Brett Walther. 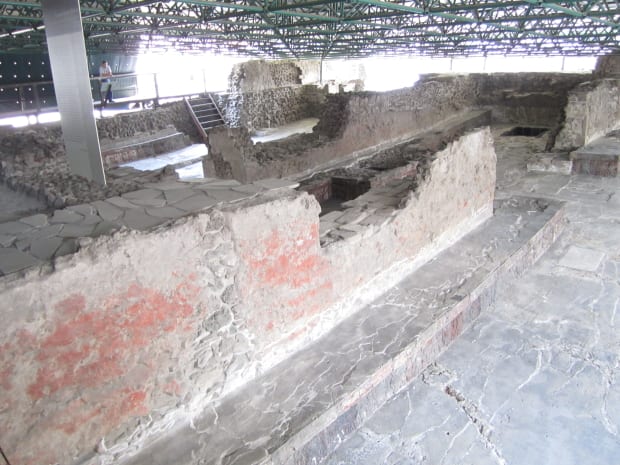 The Palace of the Eagle Warriors is the best-preserved part of the ruin, meriting its own protective roof. That reddish tint on the wall in the foreground is the original paint. Photography by Brett Walther.

If you go: * Pack a hat and bring plenty of bottled water. Most of the dig is in open air, and the heat can be unbearable. * Paid admission to the temple includes a pass to the Museum of Templo Mayor, where you'll find displays of artefacts recovered from the site. * Although exploring the ruin was the dream of a lifetime for this history buff, this attraction likely won't hold much appeal for wee ones. Teenagers will find the more grisly aspects of Aztec culture fascinating, however. * The self-guided tour involves plenty of reading, but English signage is provided throughout. * Make this a full day trip by pairing it with a visit to the nearby Metropolitan Cathedral.   Follow me on Twitter!